I recently borrowed this Arkanoid PCB from NES4Life. I wanted it as part of a project to recreate the 28 pin custom chip that found on this, Darius and probably a couple of other Taito games of the same era.
He kindly loaned me this but knew it had issues so I agreed to look at this one rather than poke around on one of his workers.

First up the game would not boot, just watchdogged.
Using the schematics available in the download section I could easily track down a stuck bit on the data bus. 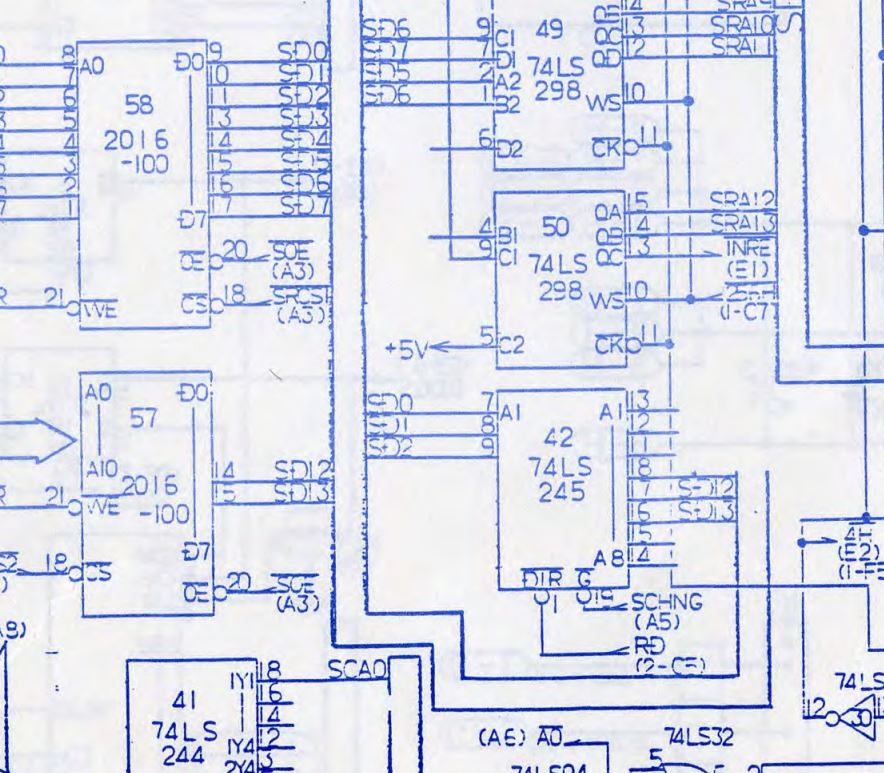 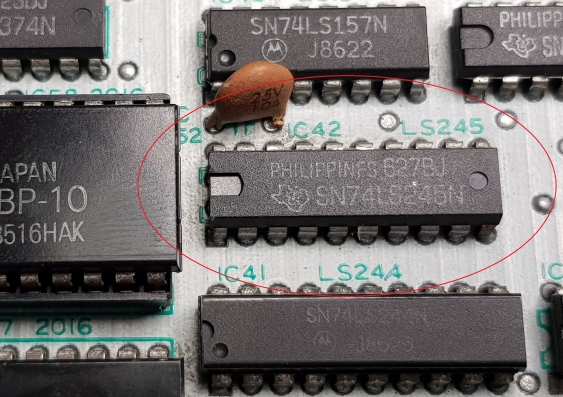 IC42 was to blame for this. Replacing it let the game boot but with all new issues. 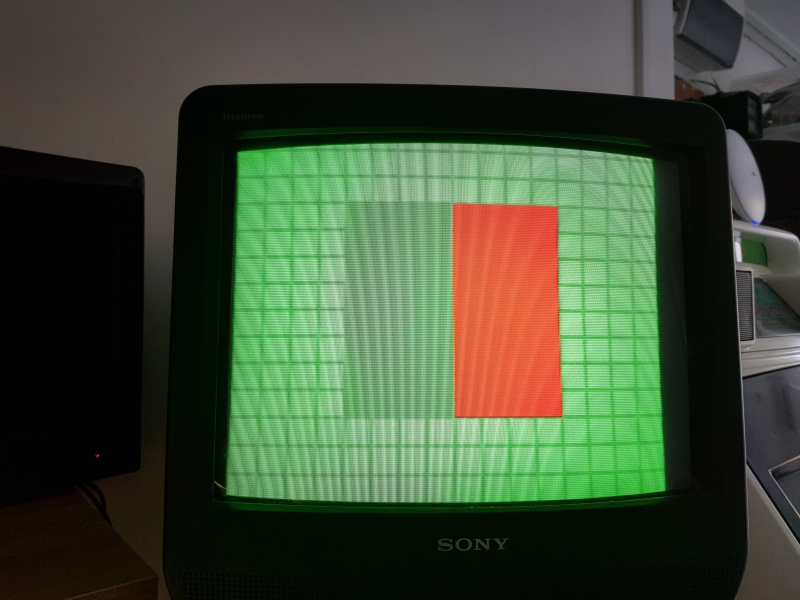 You can see the game has booted straight into test mode and the colours are messed up.
One of the DIP switches is for test mode and the DIP’s are handled by the YM2149 chip. Looking at the databus when this chip is supposed to be active showed all data bits stuck.
Replacing this chip let the game boot. 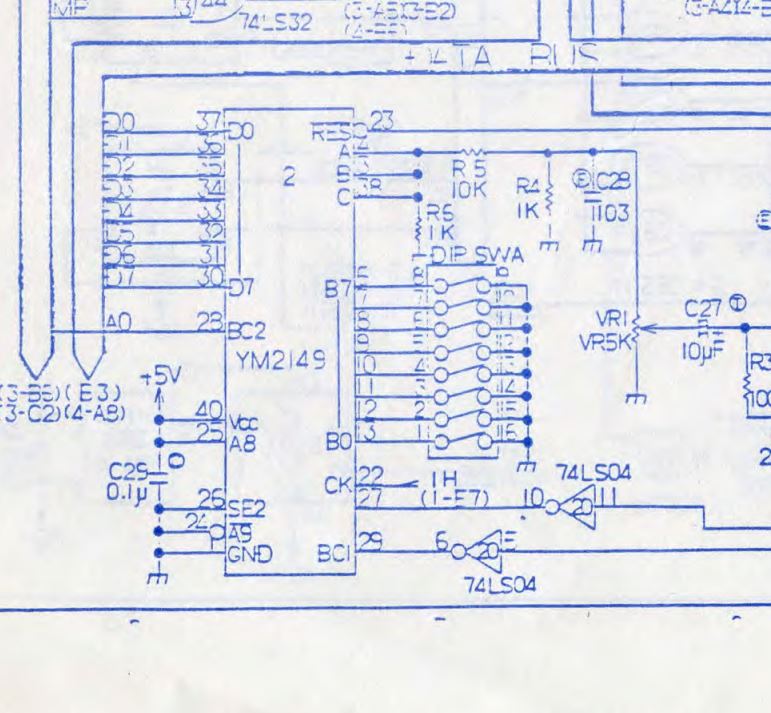 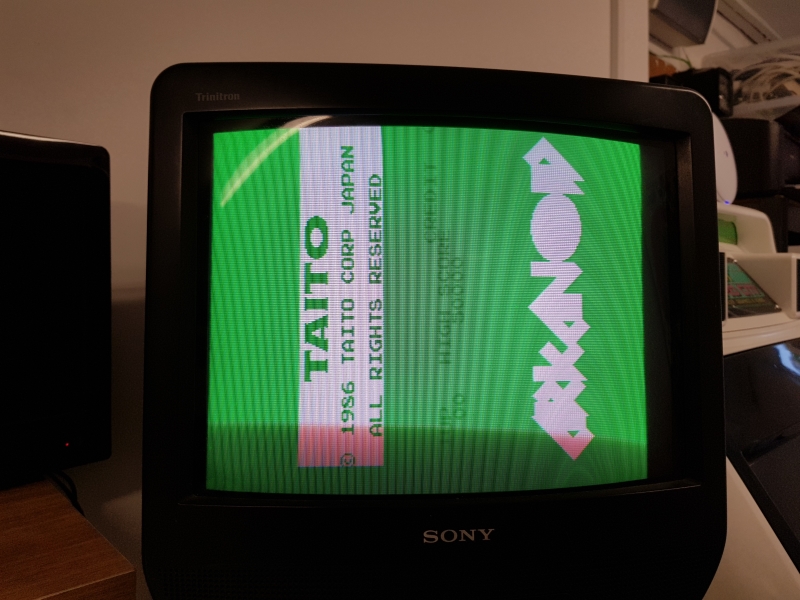 Colours are still messed up so lets look into that. I chose to start at the 3 colour PROM’s 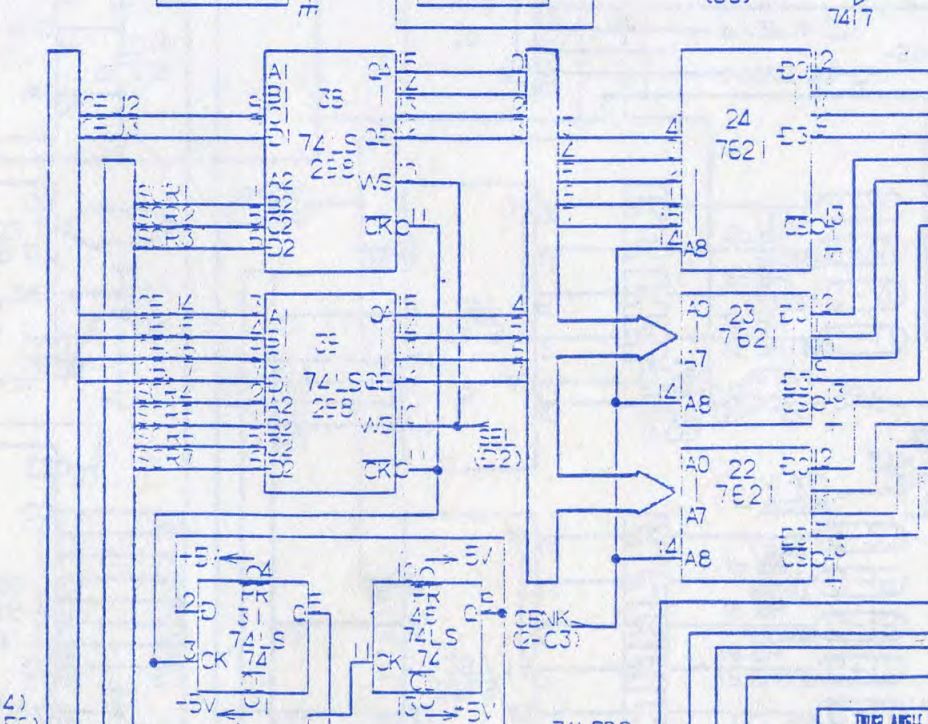 Probing the address pins revealed most were floating. Going backwards we come to a 74LS298 at location IC38. Replacing this then gave me this: 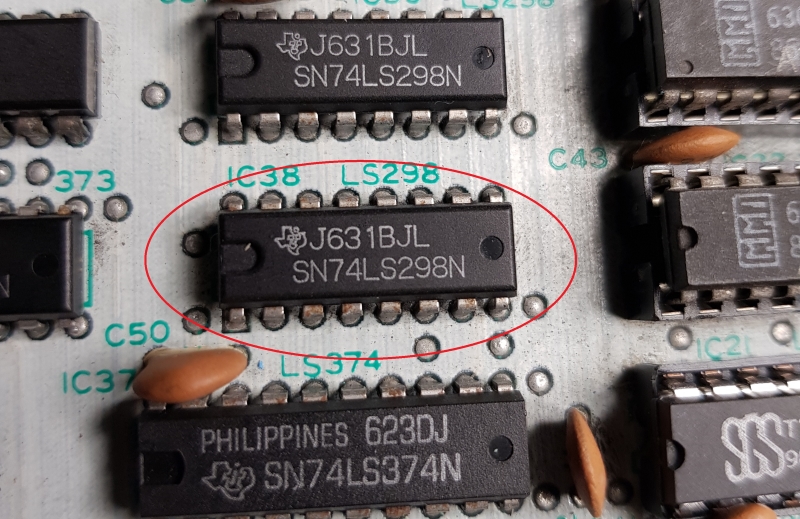 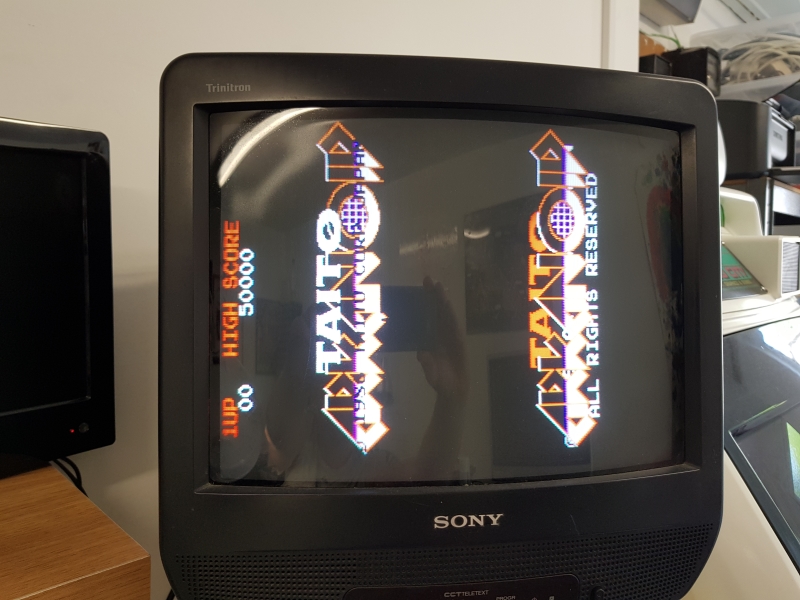 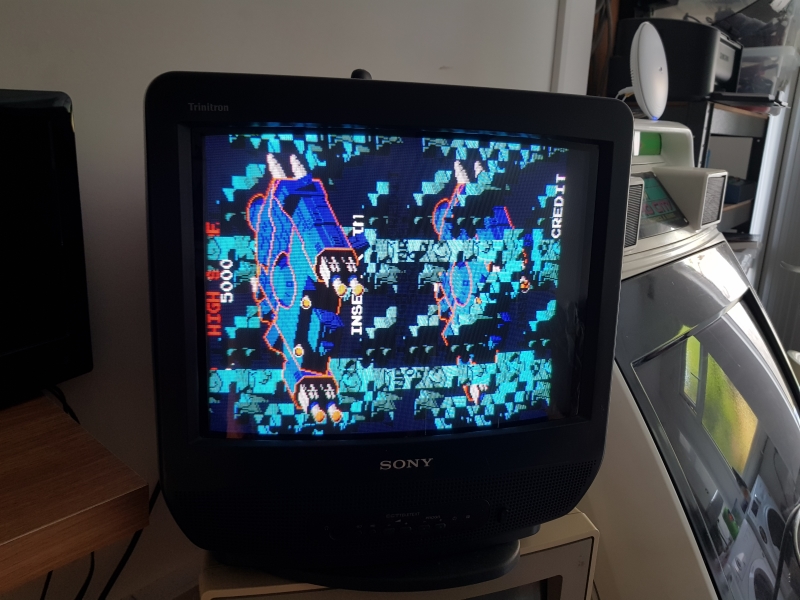 You can see now the screen is doubled up.
The graphics are contained within 3 EPROM’s. These EPROM’s are all addressed by 74LS298 chips before outputting their data to the custom bit shifters.
Checking these 298’s showed some stuck output pins on IC50. 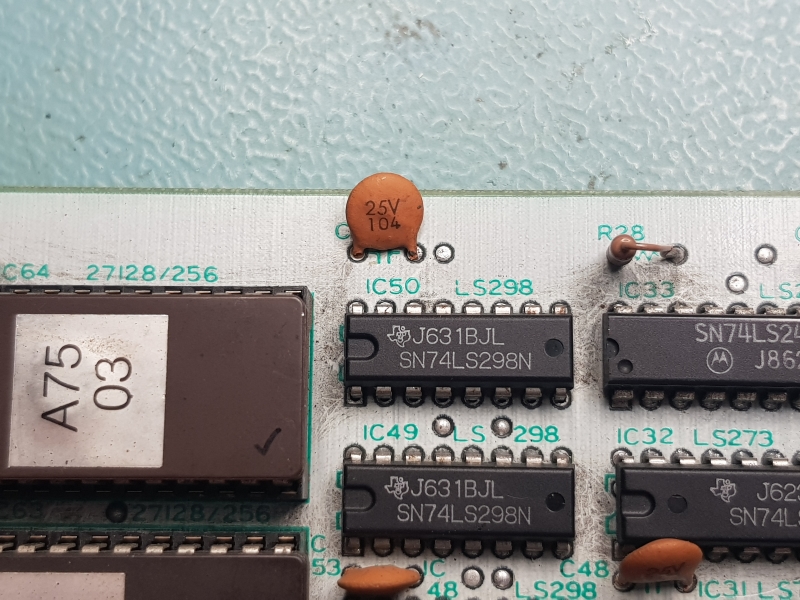 Replacing this gave me a more normal screen but the bat sprite is being drawn half way up the screen and is doubled up. 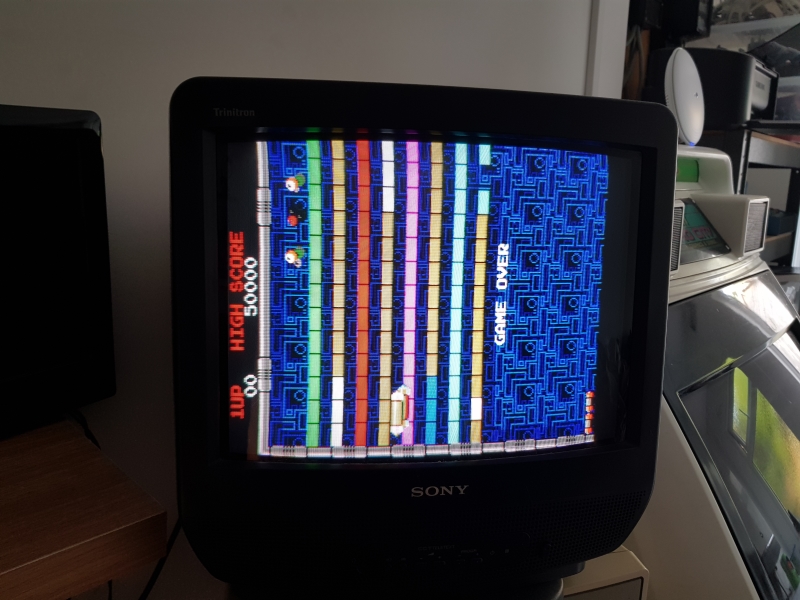 Horizontal position has its own bus on the schematics 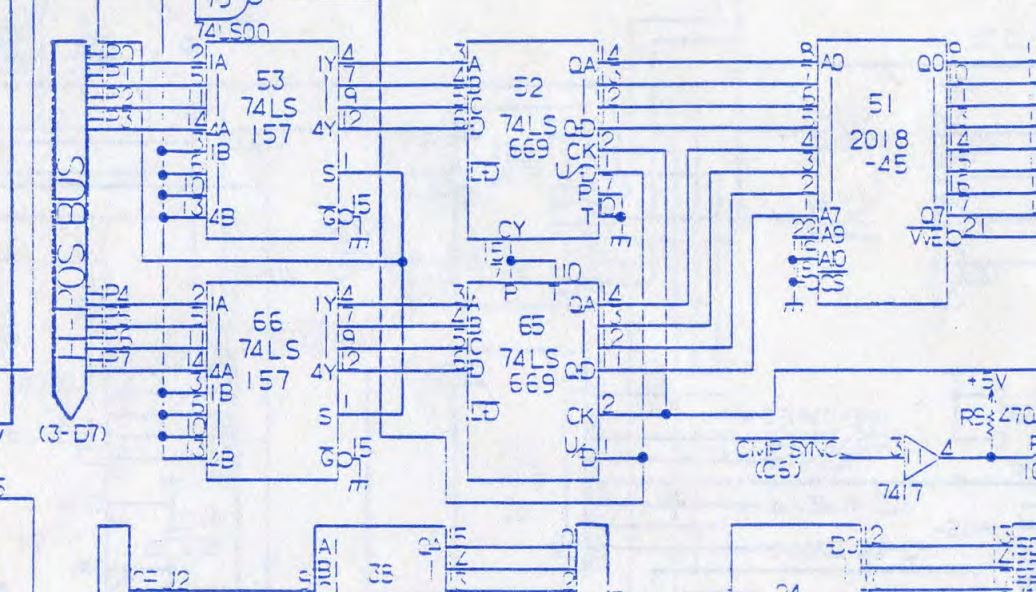 I confirmed the operation of the 74LS157’s first so moved onto the 74LS669’s. I’ve not dealt with these before and had none to hand either but I was fairly certain id narrowed it down to IC65 so I ordered some new ones up, desoldered the old one and tested it. Thankfully it failed.

Got the new chips a couple of days later and fitted. 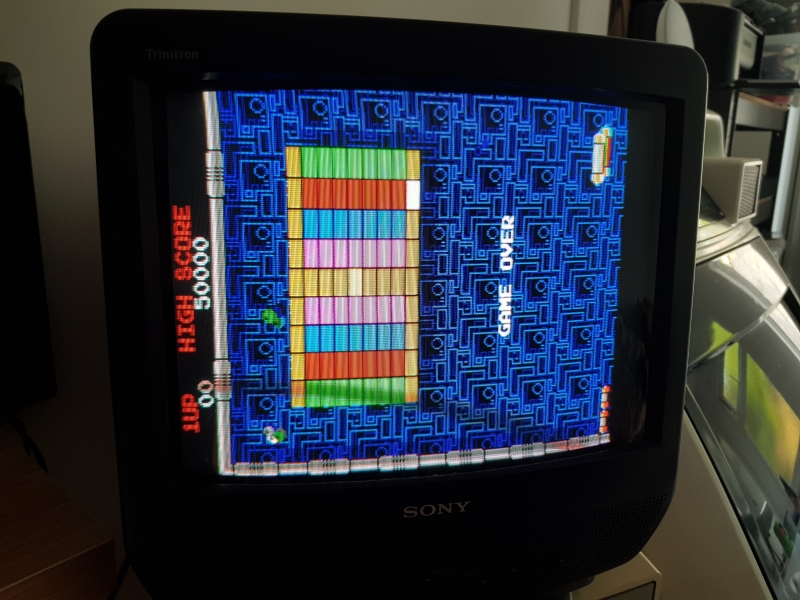 Just the double bat issue to go.
The schematics also have a bus identified as OBJ which Im taking stands for Object. It made sense to me that the issue was somewhere along the same path as the previous positioning fault so armed with my best guess going from schematics I carried on following the path first of all checking the other 74LS669. This appeared to be OK and the RAM didn’t have any unusual looking signals on so I carried on. After these there is a 74LS374 on the OBJ bus. Probing the outputs of this found a single stuck bit. Replacing this gave me a seemingly fully operation game.
I cannot check the spinner inputs but all the sounds, DIP’s and regular inputs are working.