Although I grew up with a Commodore 64, I have a soft spot for Atari 8 bit machines. My mission in life is to save them all from going into landfill.

I spotted this grimy Atari 800XL on Gumtree very recently as untested, it came with an Atariwriter Word Processor Cartridge. I met the friendly chap selling the item and we did the exchange for the computer at Town Hall steps, which is a popular meeting place in Sydney.

Taking the machine apart, I was happy to see that the machine was fully socketed and that the PCB was in excellent condition despite it needing a good clean. Actually, I was expecting a fully socketed machine because it was made in Hong Kong just like my 600xl was. Another pleasant surprise was the brand of DRAMs used ( OKI ) instead of the mT variety, which have a bad reputation for reliability and were used extensively in the Atari 8 bit and C64 line. 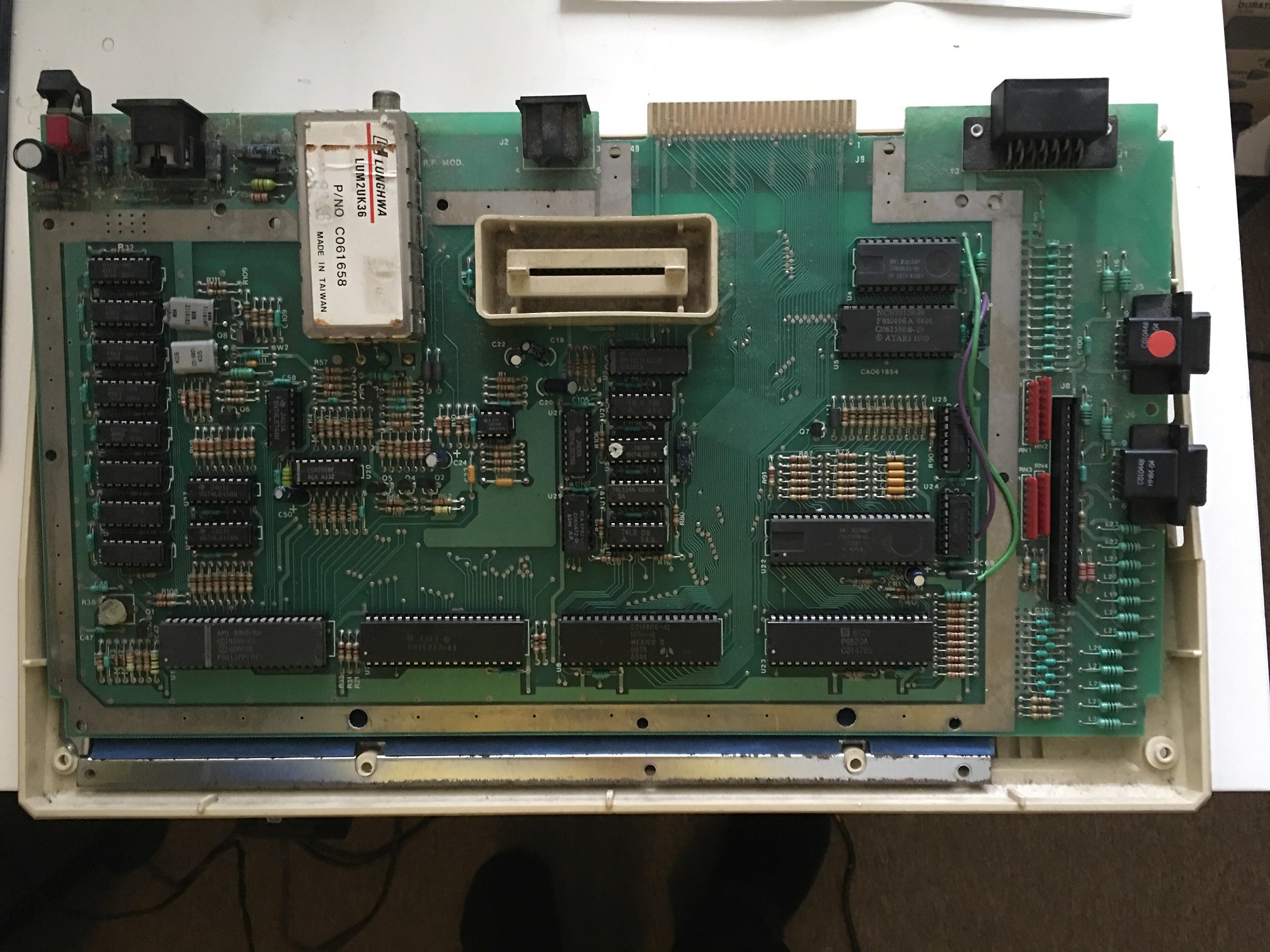 I had a close friend of mine over after work and we went through the troubleshooting together. Unfortunately, not much happens after power it up. A black screen most of the time and sometimes an intermittent picture, obviously this is a sync issue. 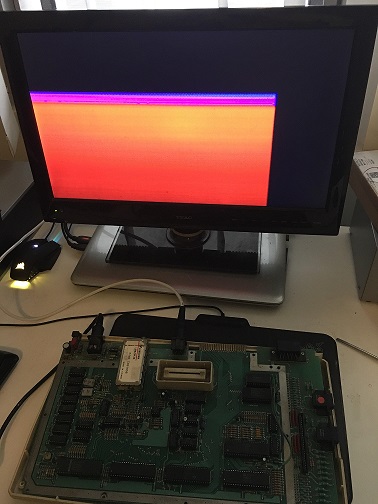 Sometimes I manage to get a screen that looks like this. This is a good sign. At least I know the CPU, ROMs and DRAMs are working to some extent to produce this screen. 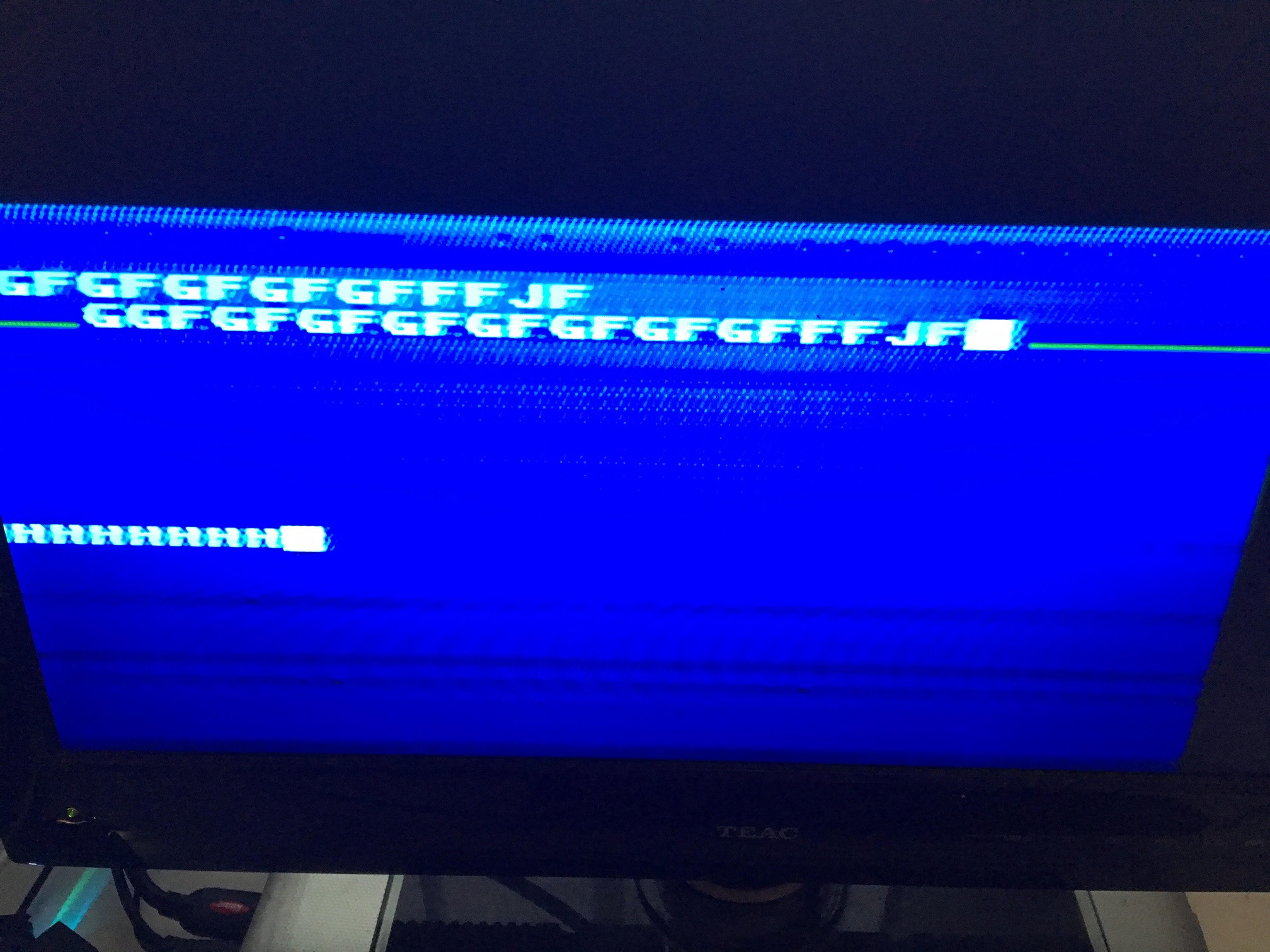 Luckily I  have a fully socketed 65XE to swap parts to and from.  I also tried a known semi good GTIA which was bad on one output only but produced a nice clean picture in a working machine. The GTIA is responsible for generating the luminance, color and csync signals to produce an image to the screen.

Replacing it doesn’t change a single thing so I consult the schematics, the signals go directly to a hex non inverting buffer ( 4050 ) so I switch my logic probe to the CMOS setting and start probing the chip. Output 6 ( lum0 ) is good, lum1, 2 and 3 were all bad and all outputs were floating. I wanted to check the CYSNC line (  composite sync ) and that was also floating ( no signal at all  ). 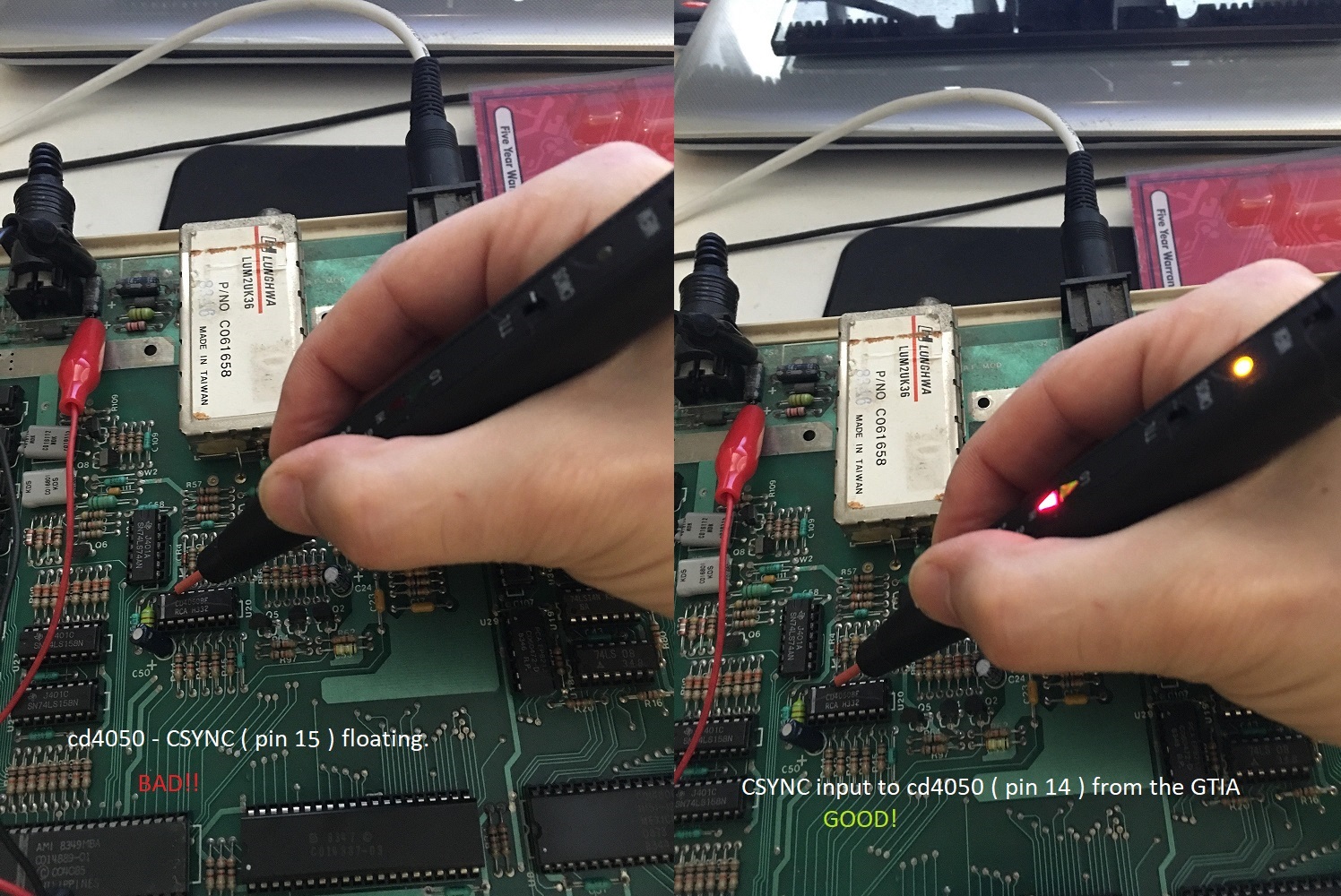 I short the input and output pins of the 4050 ( pins 14 & 15 ) with my logic probe briefly which restores the picture to the screen. 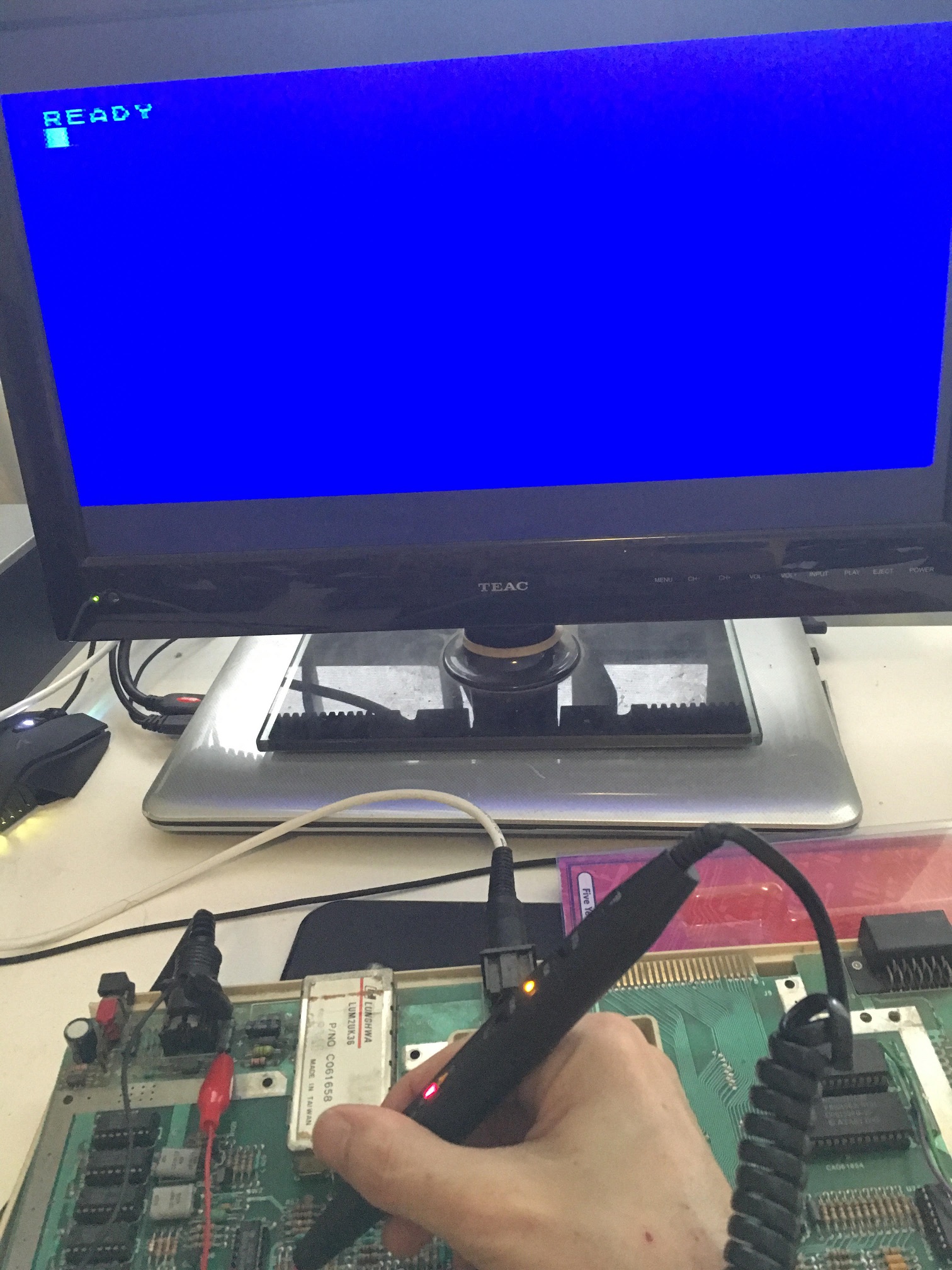 Replacing the chip completes the job! 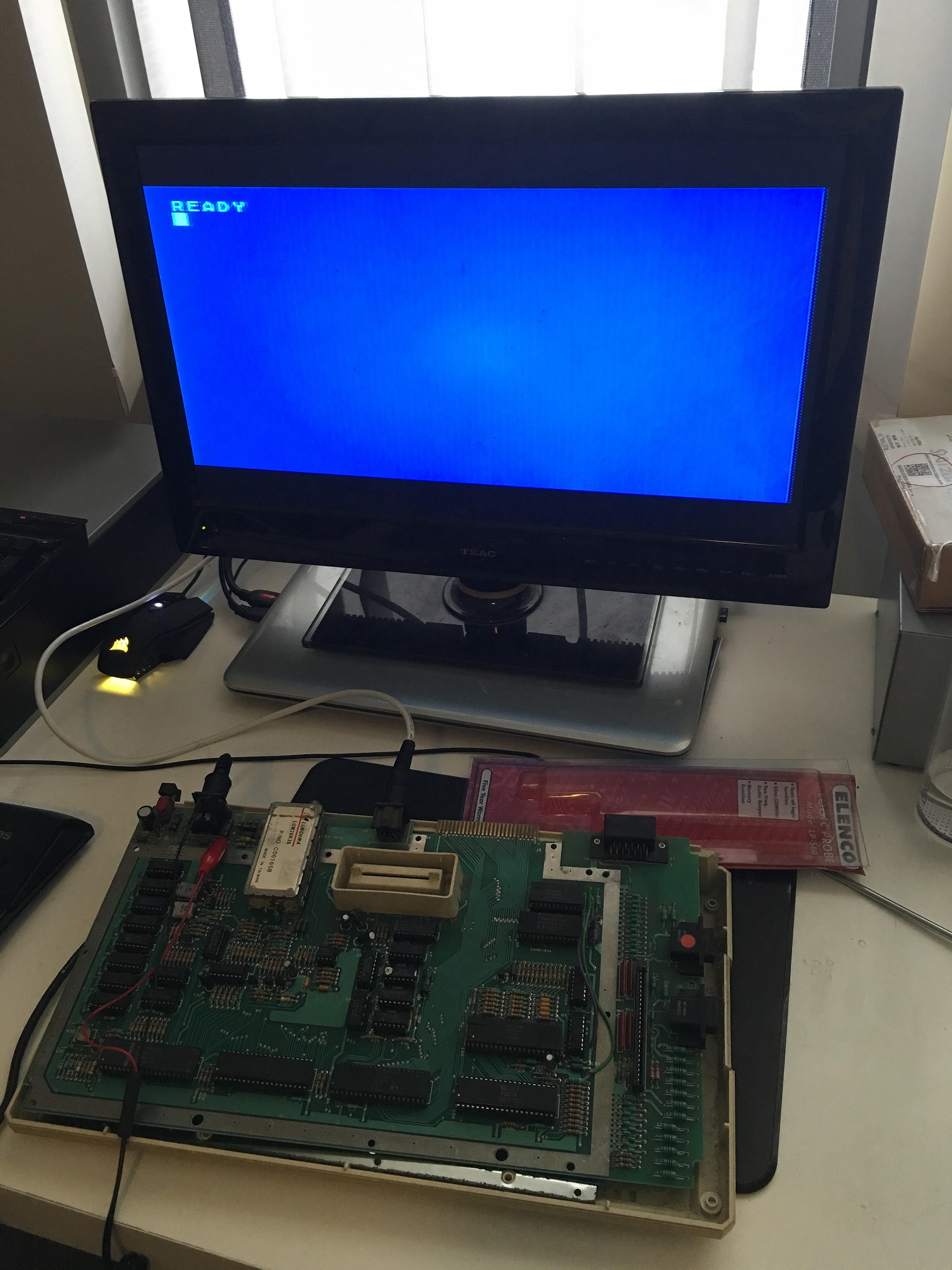 Now onto the next challenge, cleaning the motherboard and case!