This Atari 800xl has definitely seen much better days. A work colleague picked this 800xl off eBay plus a battle worn 65xe and some power supplies and other junk. Initially we had some issues troubleshooting but the symptoms were typical of a faulty power supply and bad DRAMs after re-testing with a reliable power source. 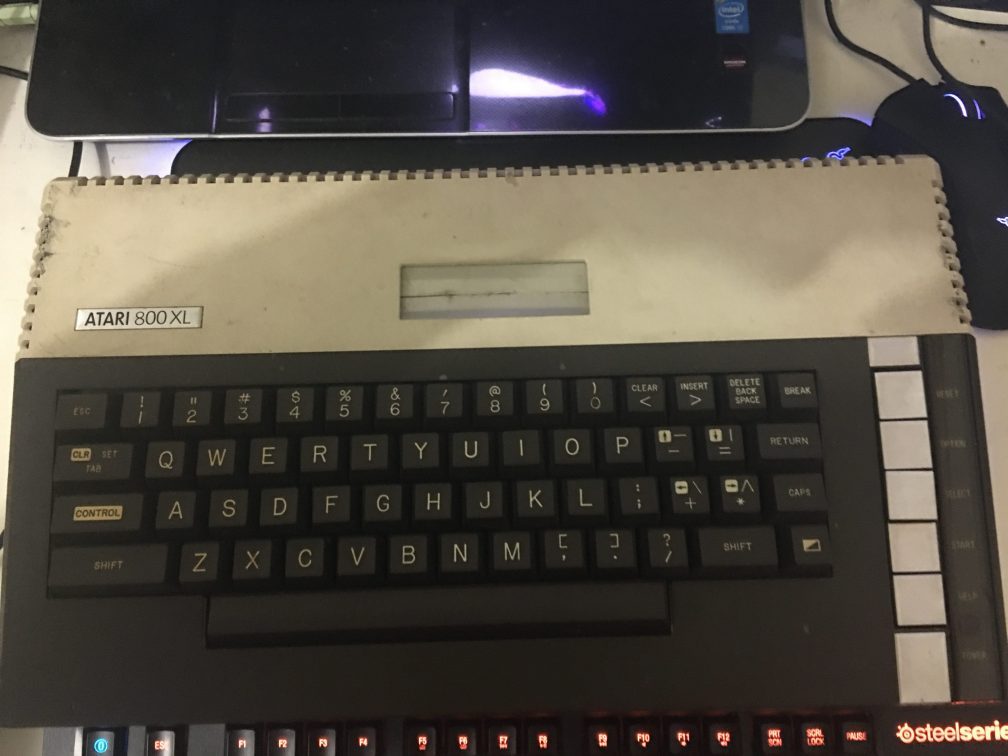 One of the power supplies had the Atari logo with a foreign AC plug. These are absolutely useless to me because they’re sealed with epoxy and could not be repaired. The other two types were also sealed with epoxy, the connectors with the 7 pin din plug would later be salvaged for an alternative source of +5v DC using a basic switching adapter for usb hubs / routers. I read that they fail spectacularly when they do with over voltage. DRAMs don’t like voltages far above the normal voltage levels and will fail very quickly. I’ve also read that the sealed epoxy types are very reliable and when they fail, they supply low voltages due to bad caps which aren’t harmful to the Atari. Regardless of what the truth actually is, these power supplies are well used and it’s likely that they’ve already failed or due. The other common cause of a dead Atari is a “Commodore 64 attack”,  the c64 has the same 7 pin din power supply connector and was often intentionally or accidentally plugged into the back of an Atari causing instant death to DRAMs & anything CMOS. The Atari only accepts +5vdc, Commodore decided to use 9vac in addition to the +5vdc.

The XL and XE series have a really neat diagnostic tool built into the OS ROM. When the option key is held in during power up, it triggers the software to boot into the diagnostic mode however, when bad ram is detected it automatically boots into the memory test as shown. 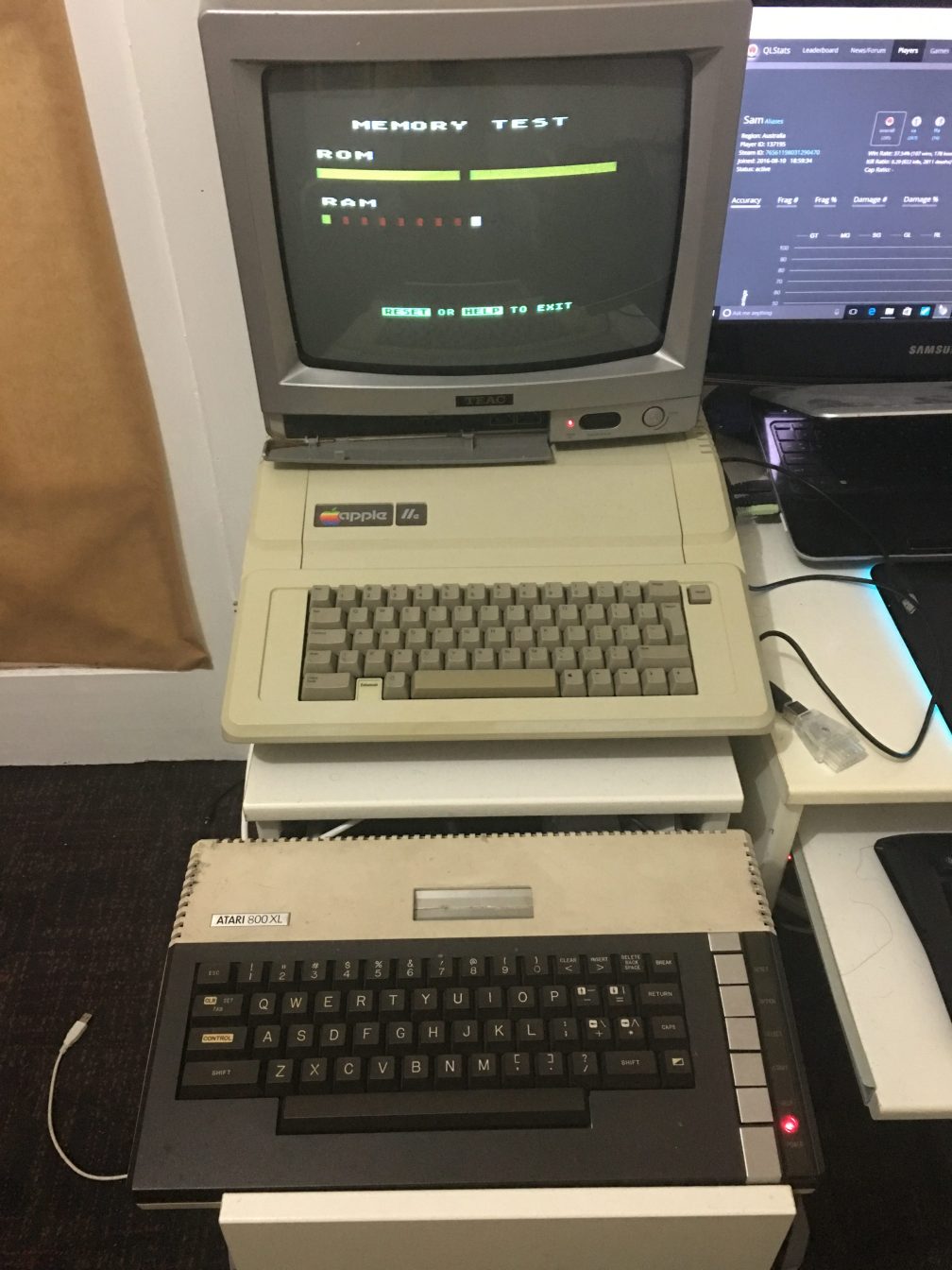 The red squares indicates that the ram test has failed. Normally, 48 green squares should be present but unfortunately most of those are red. Each square represents 1kb; would that mean it only have 48kb of ram? Well not really. The 800XL has 64kb of ram but the built in diagnostics only tests 48kb of that. It’s a very simple test. The higher chunk of 16kb of RAM isn’t tested, I guess because this area of memory lies underneath the Atari  OS ROM. Then there’s also the first couple of pages of RAM which are used to store some variables.

Unfortunately this is a revision D motherboard which means only half the chips are socketed ( cost savings ). So we need to remove our DRAMs and test them outside of the circuit. 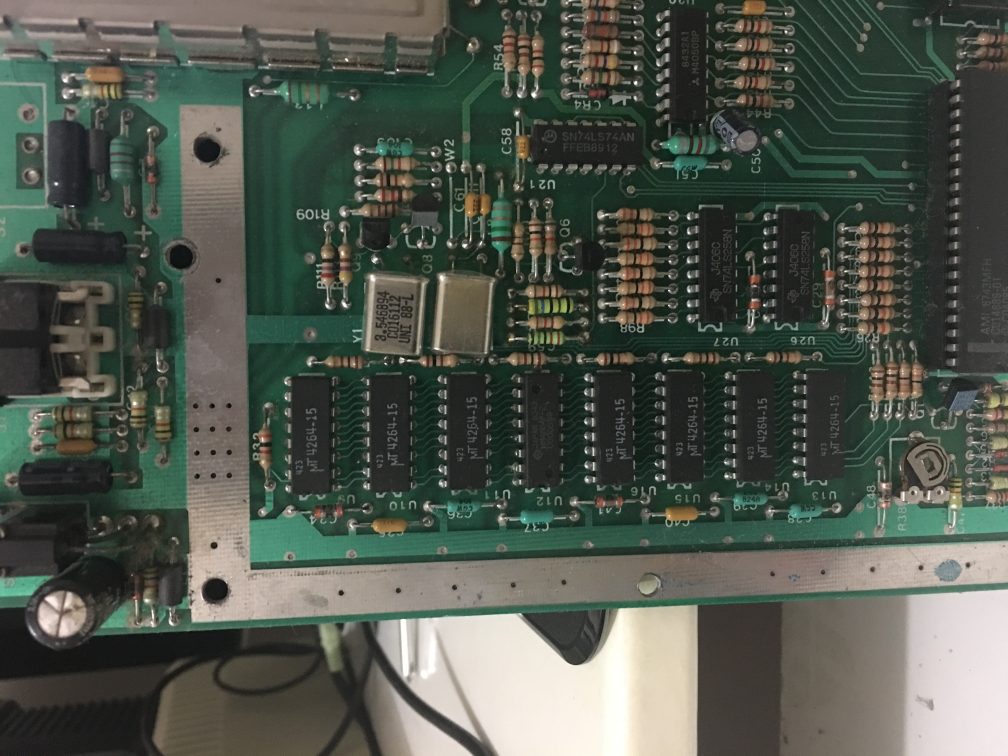 I could also troubleshoot by piggy backing to identify a bad chip but that won’t work if a chip is shorted. The board has previously been worked on and a new DRAM was already installed, this replacement could have occurred years ago. We have at least 1 additional dram fail and we don’t know the history of the machine and when this failure took place. It would be wise to replace the entire 8 devices as it’s very likely we will see another DRAM fail. Besides, this brand of DRAMs are known to be unreliable even when they were new and they were also used in the C64. It’s also very less likely that we have one or both of the 2 74LS258 DRAM address muxes fail.

So I remove each DRAM one at a time, install an IC socket and test them out of circuit with my trusty Micromaster LV48 EPROM device programmer. I tested the previously replaced DRAM and it passed the test however I only found 1 bad DRAM and it was the first one at U9 ( clearly marked X with my screwdriver ) so I don’t mix it up with the remaining working devices. 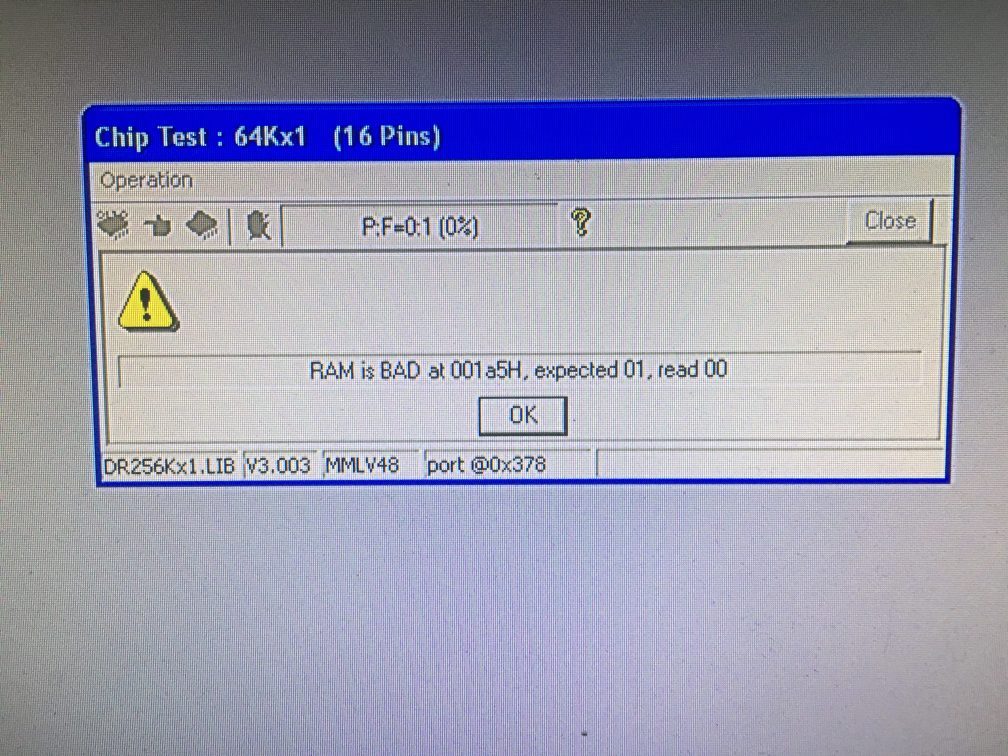 I don’t have any spare 64×1 DRAMs on hand. But I do have some in a ram expansion board which was installed to expand the 600xl’s internal memory from 16kb to 64kb. I finally convince myself to salvage the DRAMs to fix the 800xl since I already have some spare TI 64x4s which I can put in my 600xl and use it to troubleshoot the dead 65e, it would require a modification but it’s a very simple mod which many have done. Besides the ram board is totally unnecessary as pointed out by people on Atariage who made jokes about it as I tried to identify its origin.  I was also expecting to receive my Antonia 4Mb upgrade board from Poland to install in the 600xl so I wasn’t really needing the 64×1 DRAMs anyway.

The disgraced ram board. 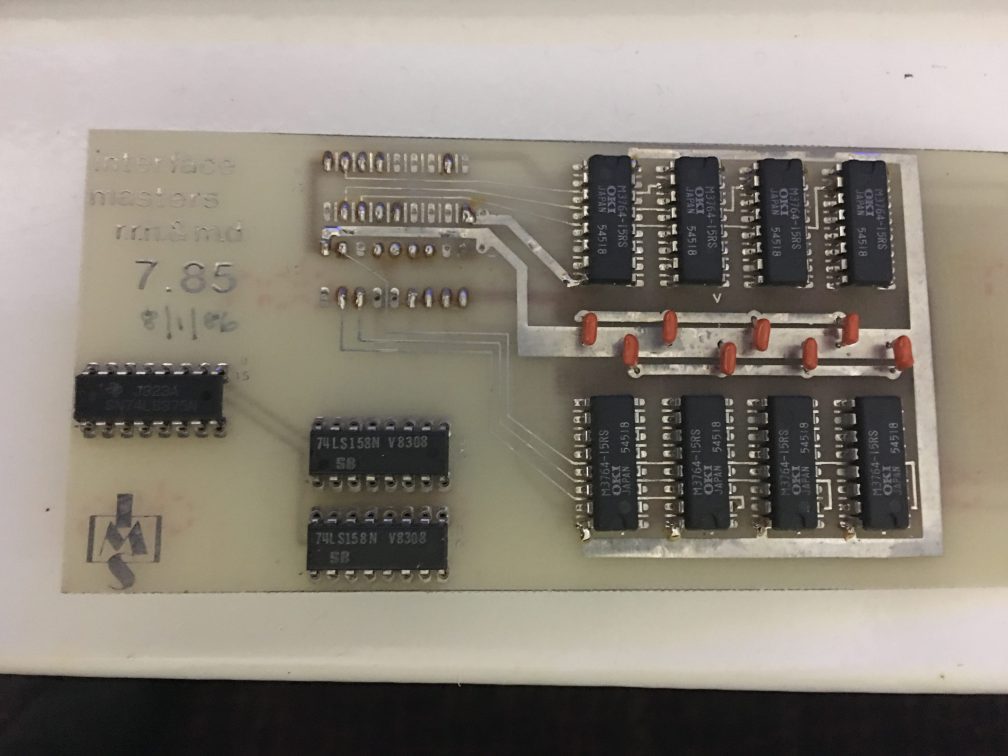 Installing sockets and replacing the entire stack of DRAMs seems to have cleared the ram error but I intend to load up several games that use up the entire 64kb to make sure and test the machine over a few hours. I also tested each DRAM in my device programmer to verify them before installing them in the 800xl. 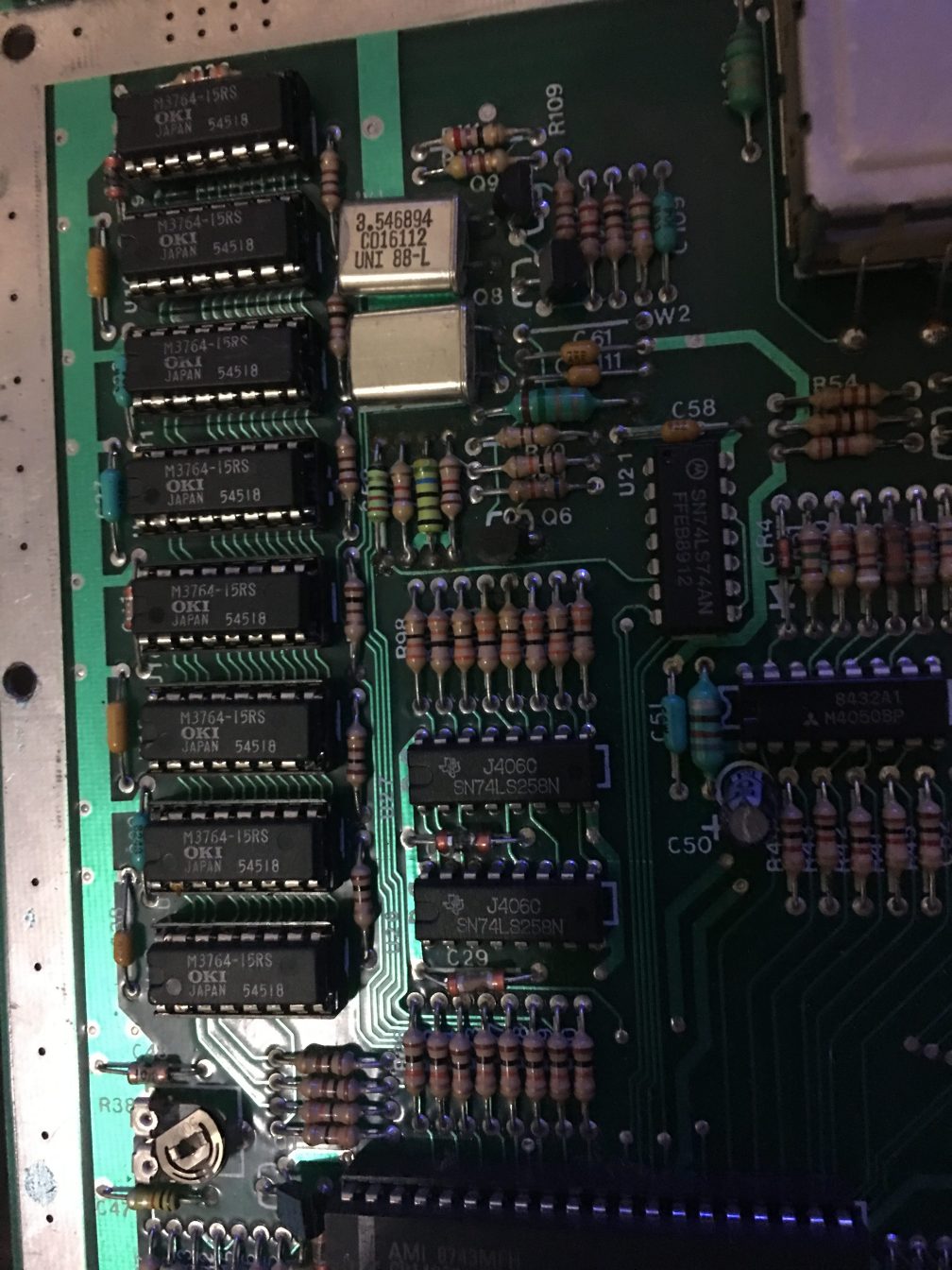 Whilst I’m working on this I’m also giving the Atari 800xl case some whitening treatment using a simple solution of laundry booster and water. I submerged the parts in this milky solution and left it in the sun for several hours over the weekend. This is a very effective and cheap alternative to some of the other solutions out there. The sticker had come off, so I had no problems submerging the bottom half of the case. I would later glue the sticker back on once the case was dried. 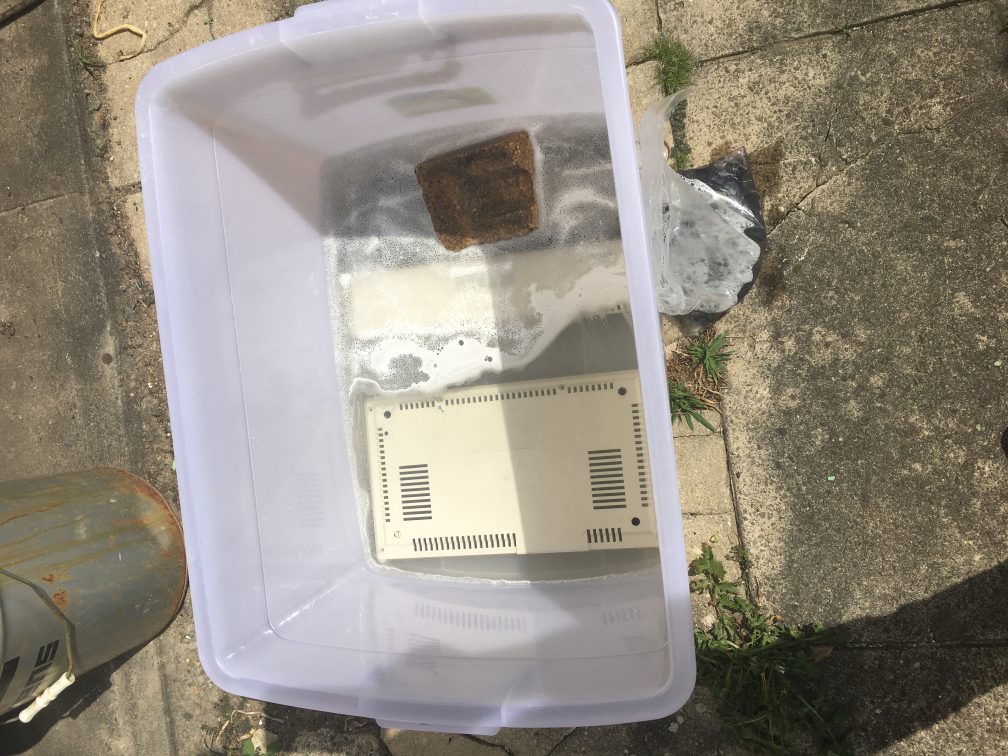 I like the results. Some keys are still slightly yellowed but I don’t mind. 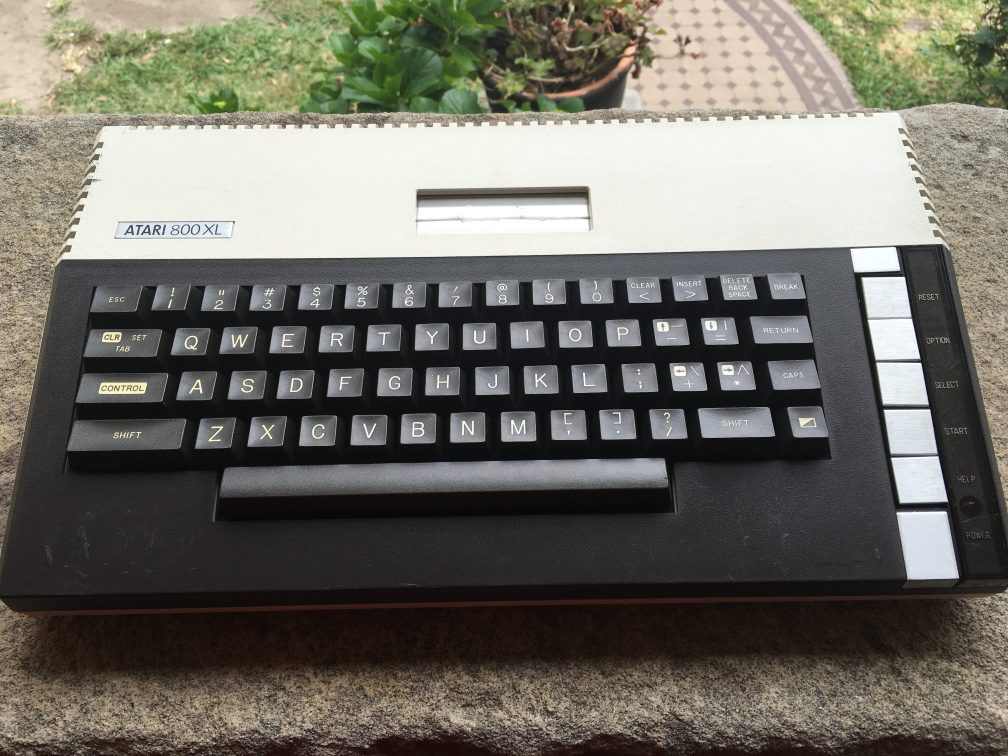 A few hours go by playing my favourite game on the Atari, Dropzone. Now I have a bunch of 4164 DRAMs which I’ll use for troubleshooting purposes. 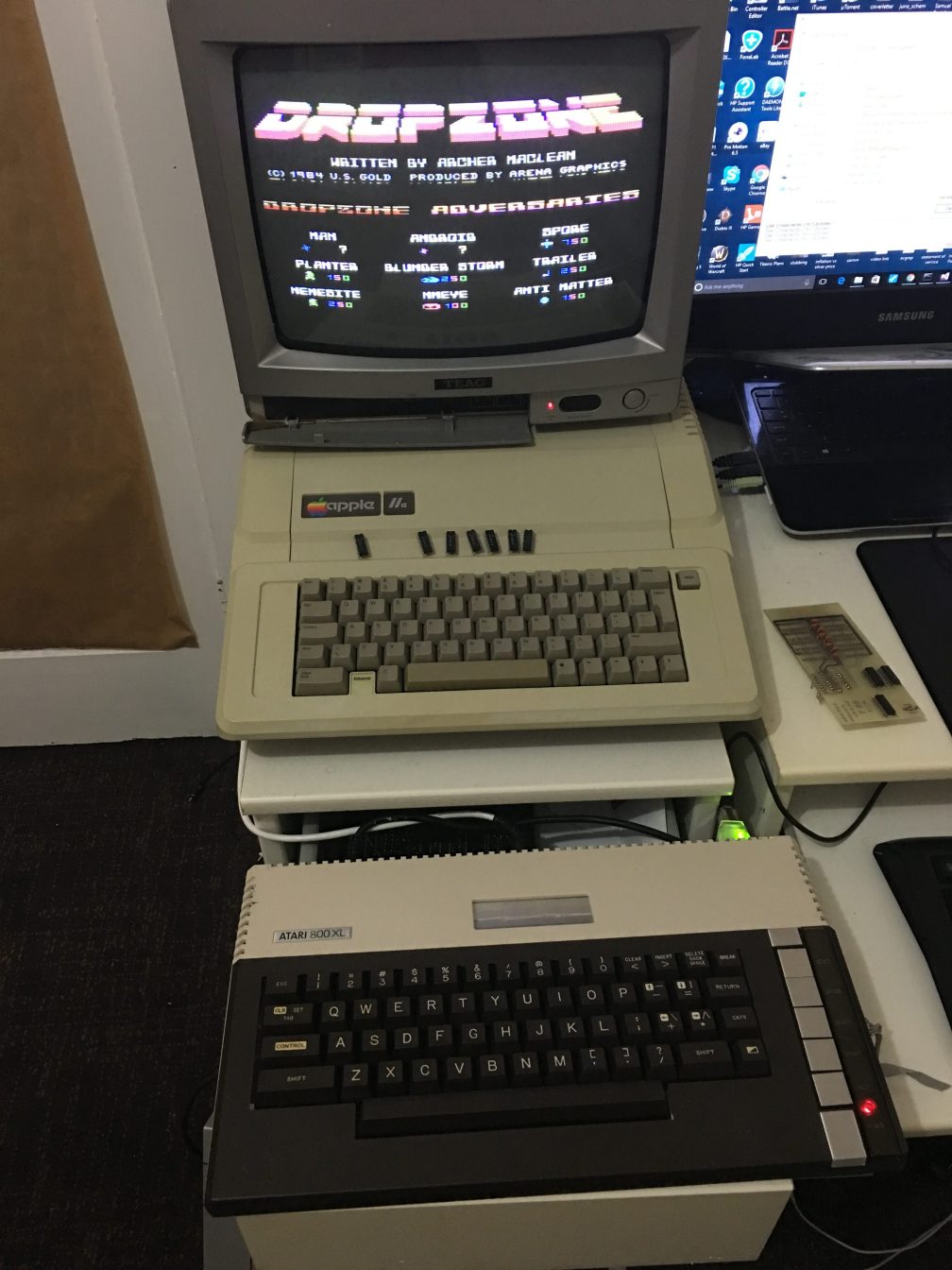 RAM test shows no problems but I had an issue with the TEAC television set shown previously and l had to replace it with this piece of junk. That’s two sets gone in two months with no desire to repair them. 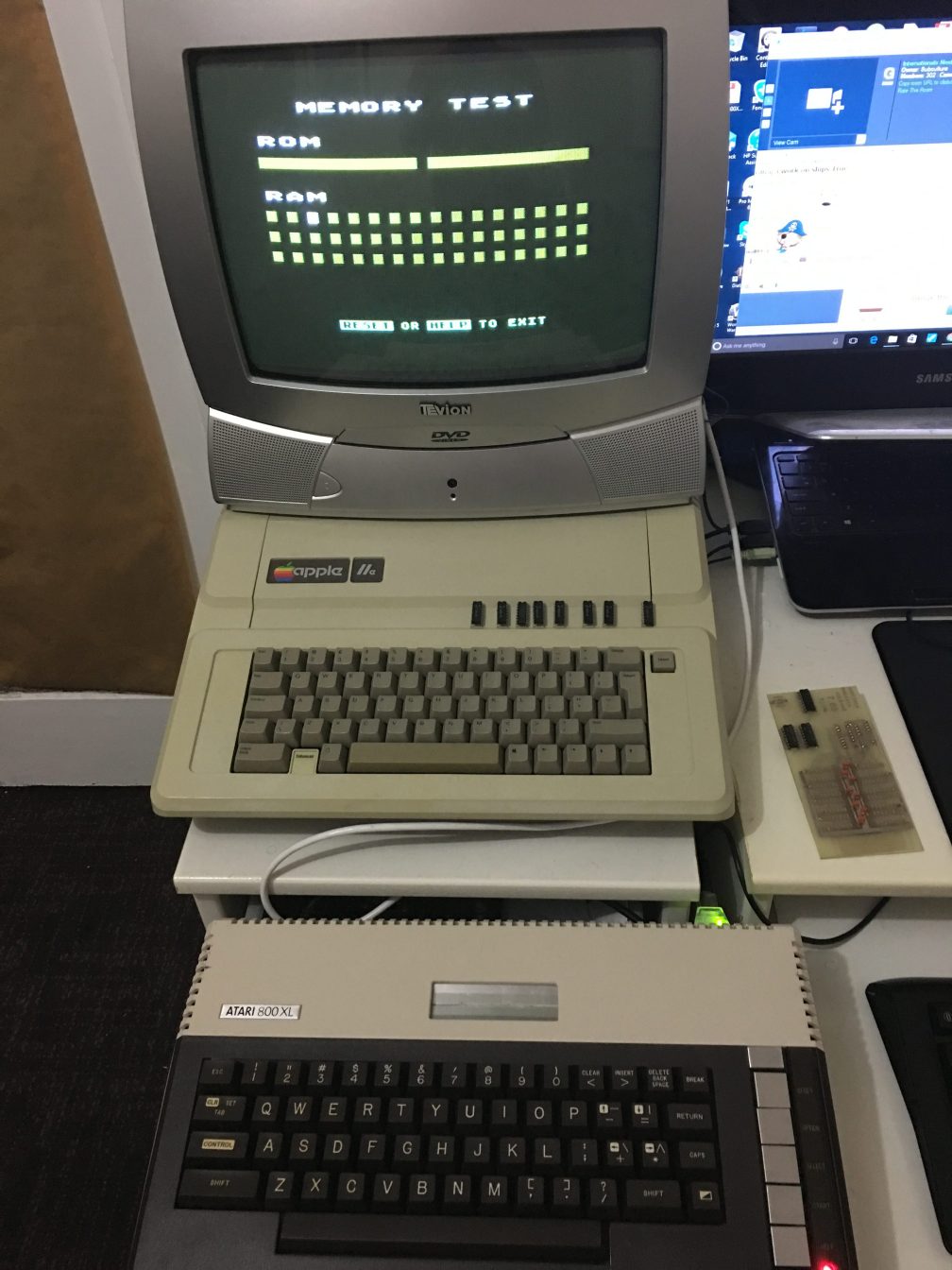 With that done. It was time to give the machine back to it’s owner and start working on the 600xl which I’ll use to troubleshoot the 65xe ( I’ll cover that in my next post ) by substituting in parts until the 600xl breaks.

These are the instructions I followed and results.  3 wires, bend up some pins ,some soldering and you’re done. I had to reinstall the 2 x 74LS138, 74LS375 from the RAM board to the machine. There was also a 74LS32 missing which isn’t really needed depending on the variation of the mod you’re performing but I managed to scrounge one from an arcade parts board. 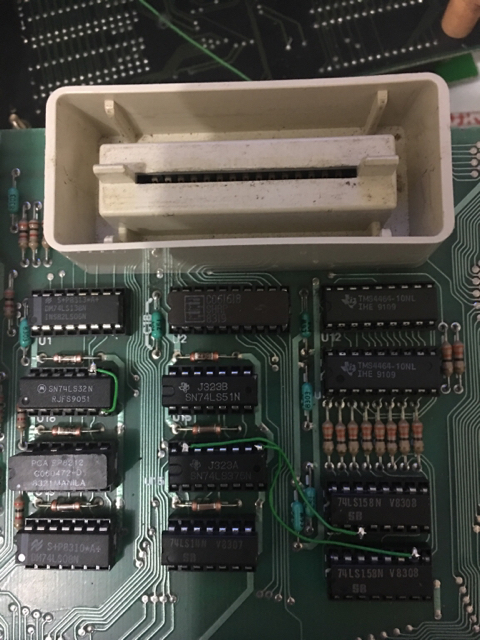 2 x TMS4464 DRAMs installed. Much better than the expansion board!