I purchased a “mostly working” original Taito Bubble Bobble PCB for a good price, with the hopes of repairing it and adding it to my collection. The seller mentioned simply that there was an issue with the sprites. Upon testing the PCB, the fault presented itself. When the sprites rendered “normal” direction, they were fine. When rendered “horizontally mirrored”, extra odd-colored pixels were being drawn with the sprite. You can see the pink pixels to the right of Bub and the baby blue pixels near the fruits. It was especially noticeable on certain enemy types, quite distracting from the gameplay. 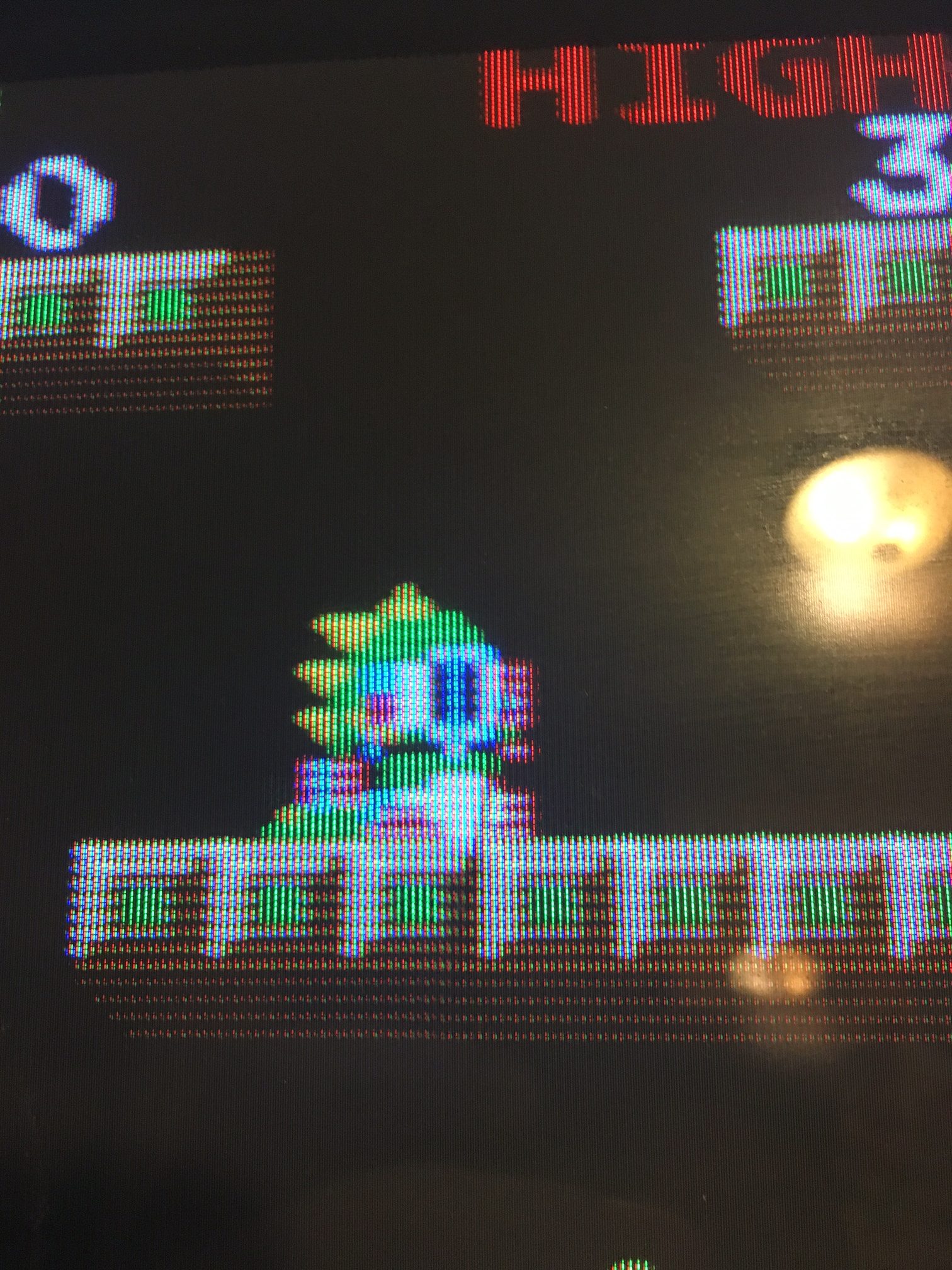 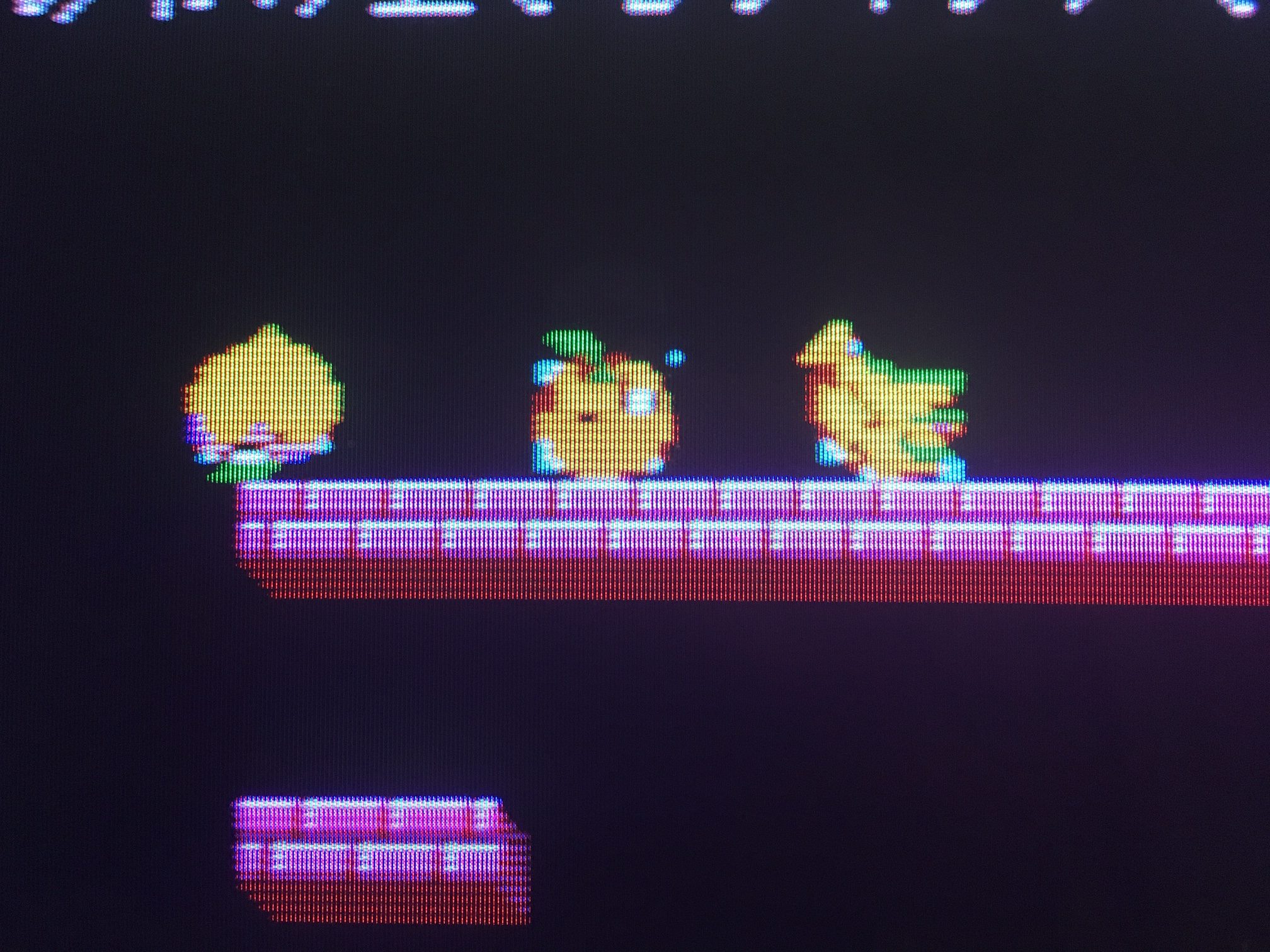 I investigated the roms, the ram and most of the TTL logic IC’s, all of the usual suspects tested OK. The PCB is in really nice shape, so I knew the issue wasn’t physical damage. At this point I was pretty stumped, and decided to email my good friend Caius. After explaining the symptom, and what I had already tested, he suggested looking into the 74ls163 4-bit counters near the graphics roms. They are a bit tricky to test with a logic comparitor, so I opted to test them out of circuit. All 5x 74ls163’s passed the TTL test in my Xeltek, so unfortunately the fault was not there.

I decided to not give up hope however, and to look into the other TTL chips I was unable to test with my Logic Comparitor. I came across a bank of 4x 74LS194 shift registers. I tested them out of circuit (since my comparitor couldn’t analyze them), and finally I found the fault! One of the 4 registers was bad. 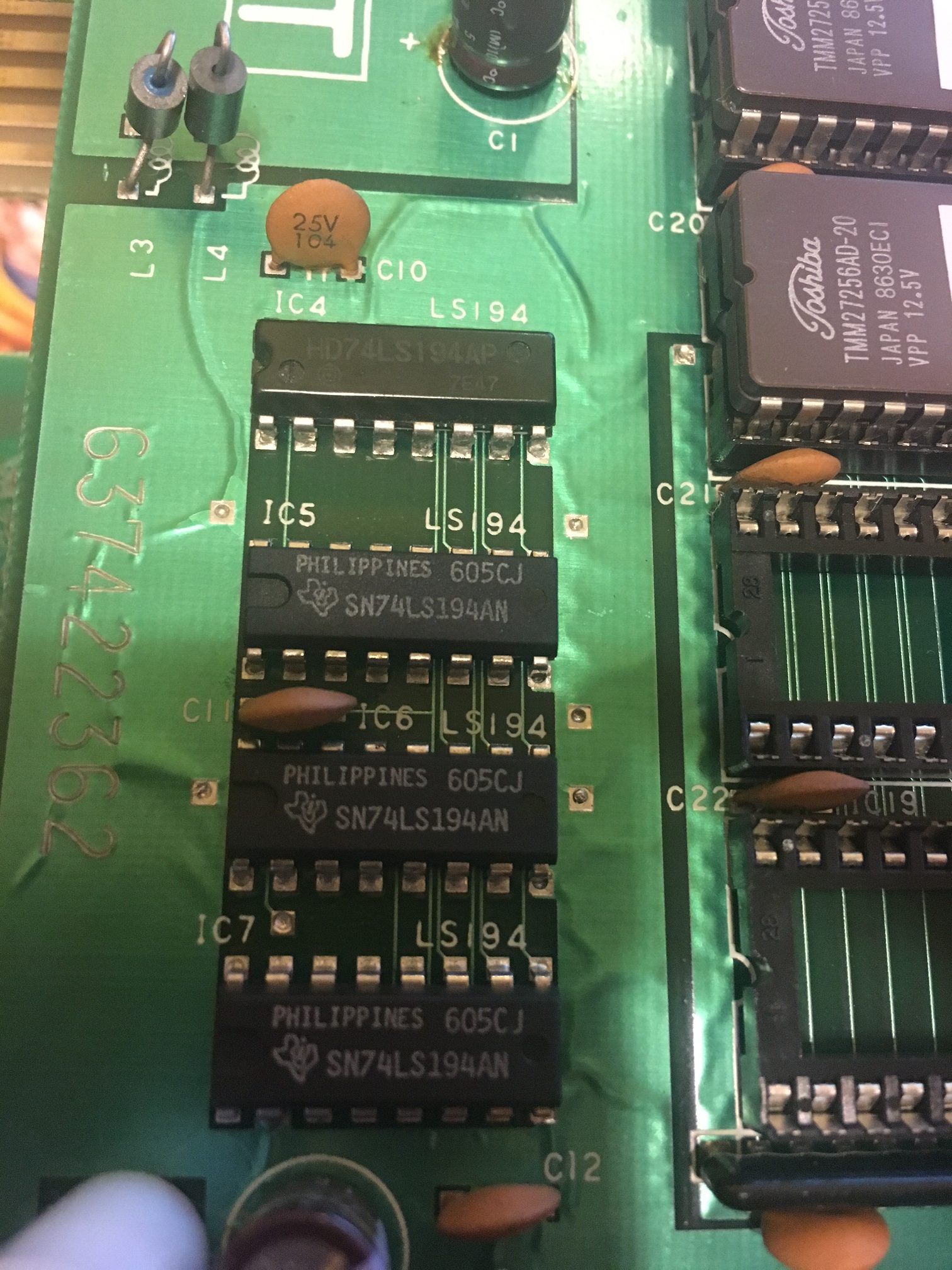 After digging through nearly my ENTIRE parts boards inventory, I finally found a donor IC on a dead Double Dragon board. It turns out not many arcade games used 74LS194’s in their design (likely they became integrated in custom graphics ASIC’s instead). I swapped the good shift register in, and the graphics problems are now fixed. 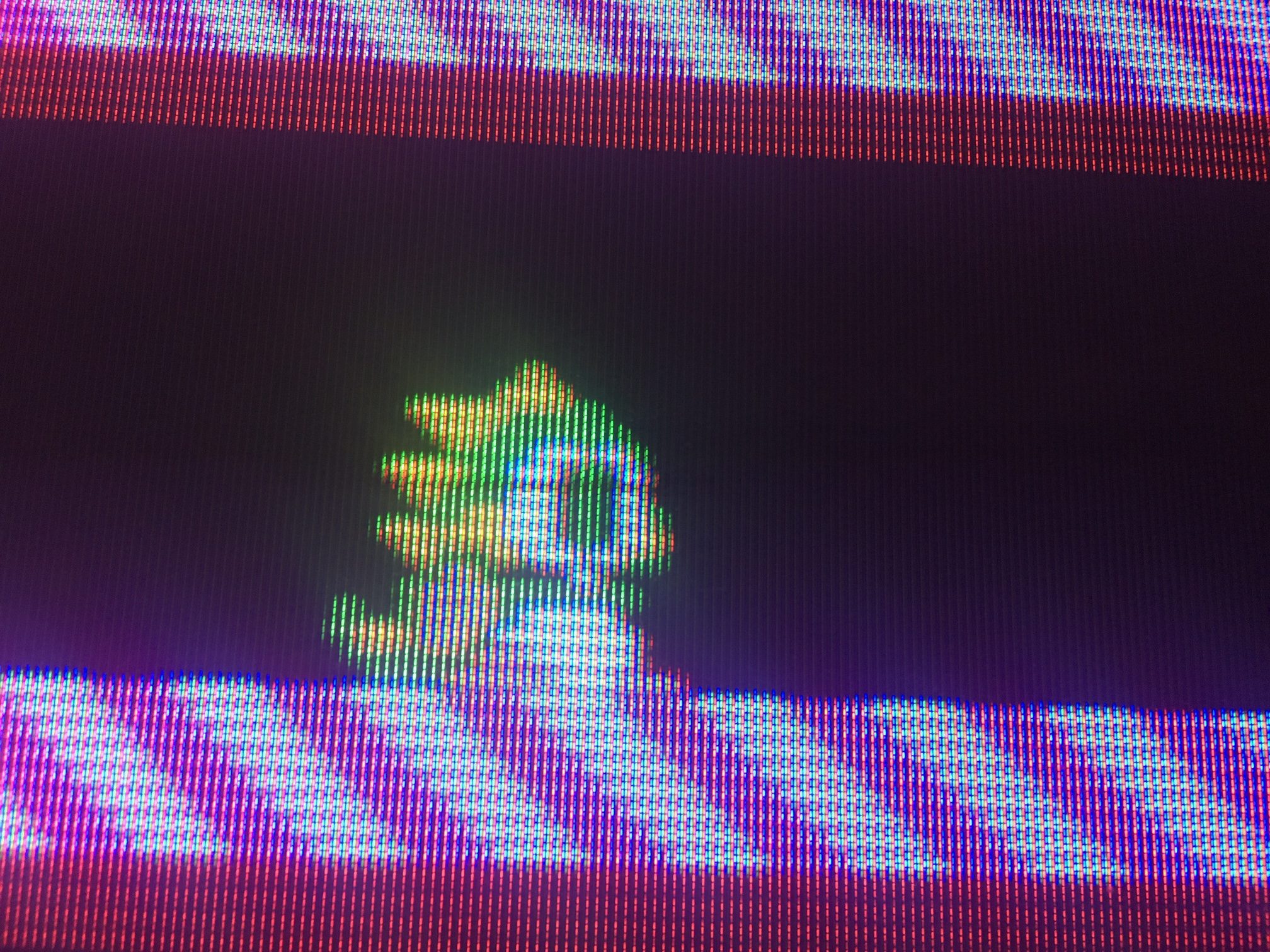 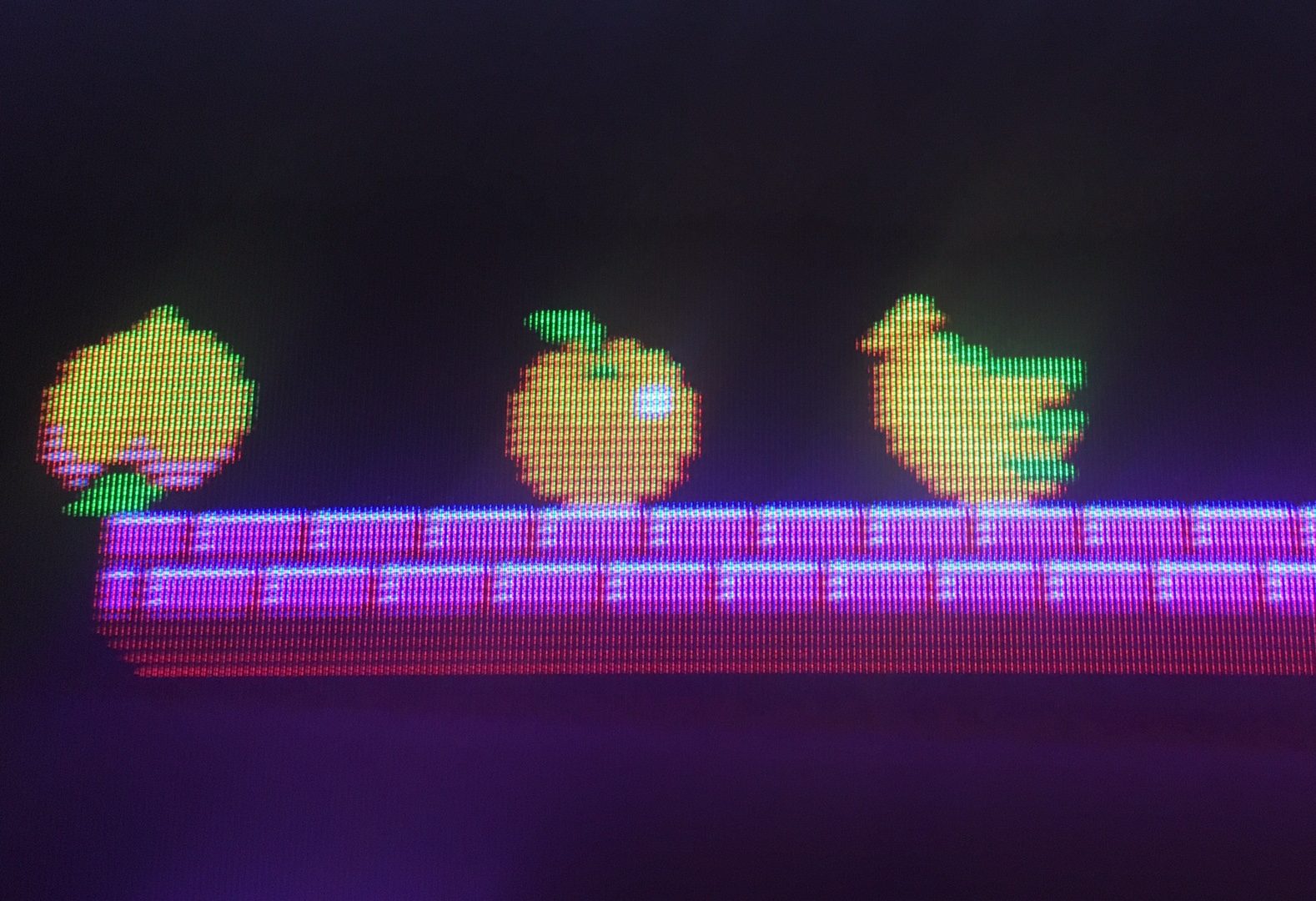 Big thanks to Caius for assisting me with this repair! He got me on the right track, and now this wonderful game can be enjoyed for years to come!

The following is more of a public service announcement than a repair. I have owned the same Naomi 2 motherboard for about 5 years now. I use it on and off in my personal collection and have never had an issue with it. A few weeks ago, I tried to boot the system, and unfortunately it was stuck on a black screen, completely unresponsive. I could see the power LED’s turning on, the fans would spin up, but it would never make it to the boot sequence. I was especially frustrated as it was working a few weeks prior before going back in storage.

I did some reading online, this is apparently a very common issue on both Naomi 1 and Naomi 2. There is a 5.5v 0.1uf super capacitor near the bios. This capacitor is known to leak, and when it does, the 5v levels become unstable causing the Naomi to not boot. The fix was relatively straight forward, install a new super cap. I was able to find a Panasonic OEM replacement for about $5 including shipping.

It was actually really difficult to remove the old cap, the ground and 5v traces quickly absorb the heat from the soldering iron. I ended up cutting the capacitor off of the board and removing the legs with tweezers. Once removed, I used wick and a lot of patience to clear the holes. It was slow moving but eventually became clear, be sure to use the largest solder iron tip you have. Once the holes were clear, I used white vinegar on a q-tip to clean the surrounding area on the parts side of the PCB. The cap had indeed leaked, and rusted on the bottom. Fortunately I caught it in time, before the electrolyte destroyed any traces. 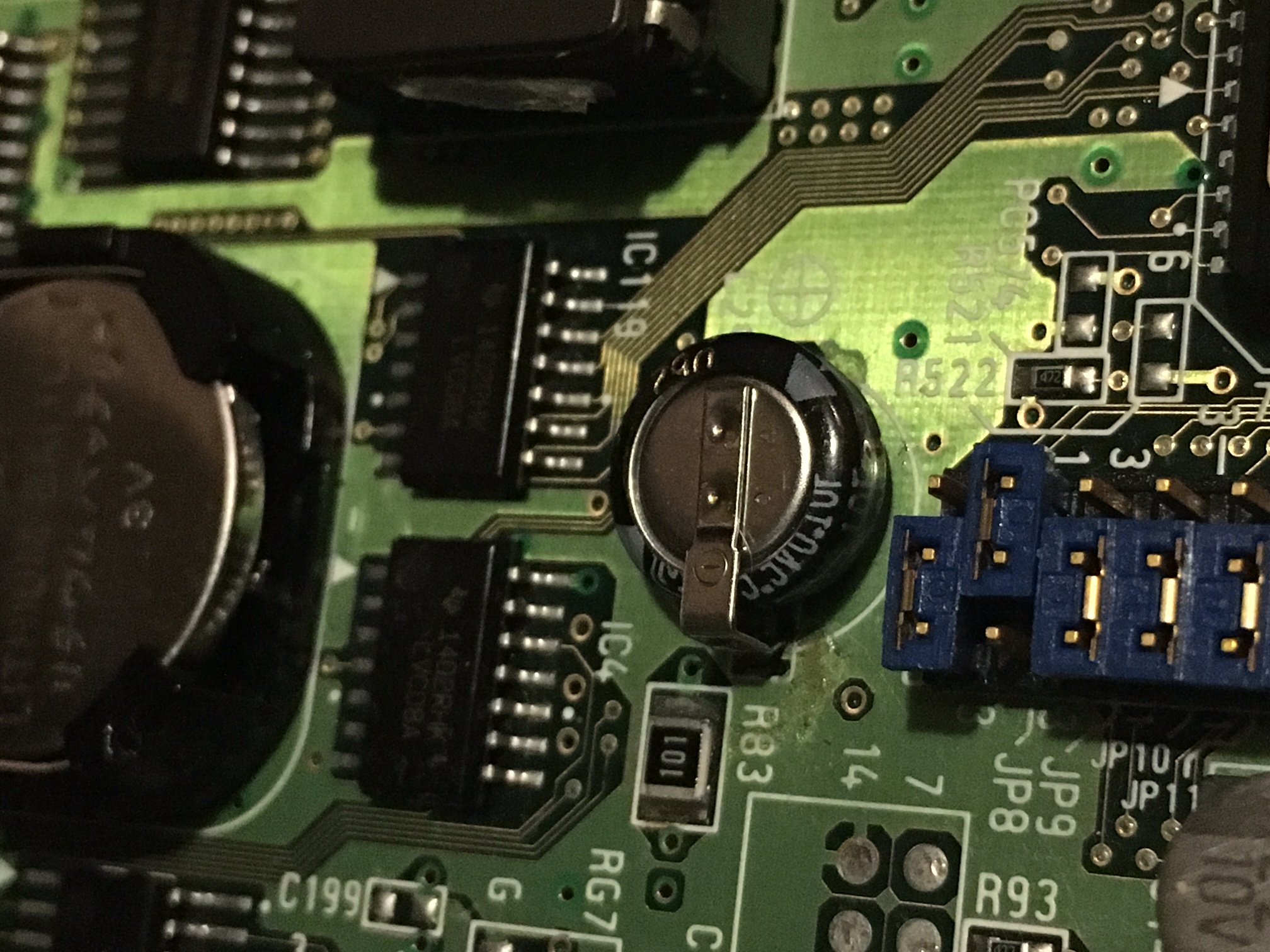 I received a Golden Axe system 16 boardset, advertised as untested. When it arrived, it booted to a black screen. It still had a custom Sega encrypted CPU on board,  which means it likely suicided. I swapped in a stock 68000 CPU and desuicided the rom board by reprogramming decrypted program roms. The board booted up with full audio and at a glance seemed to play fine… until I started a game. Immediately I noticed the backgrounds were fine, but all of the sprites were “squished” into a one-row column of pixels. Unfortunately I did not take a photo when the PCB was in this state. I was able to observe the column of pixels changing color, which told me this was likely a complex logic problem, and not ram/ TTL logic related.

I turned to the schematic and the mame source code. I quickly learned that the 315-5196 custom Sega IC was responsible for sprite generation. In my parts PCB inventory, I have a nice condition System 16 motherboard where the corners have been snapped clear off (25+ traces damaged).  It was perfect to pull the suspected faulty IC.

Using my hot air gun, I removed both the suspected bad IC, and the donor IC. 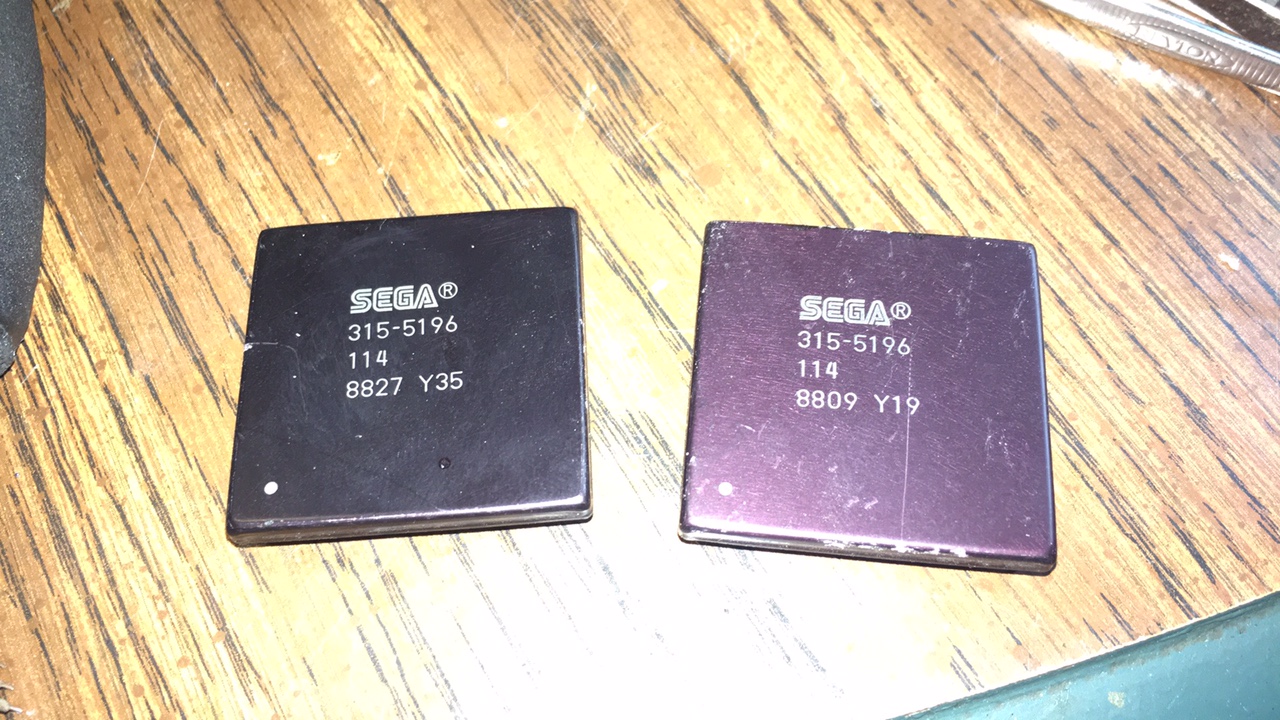 And then I prepped the board for install (also with hot air gun). The chip went in without a problem, I heated the area until the solder was liquid, and carefully dropped the donor chip into place. 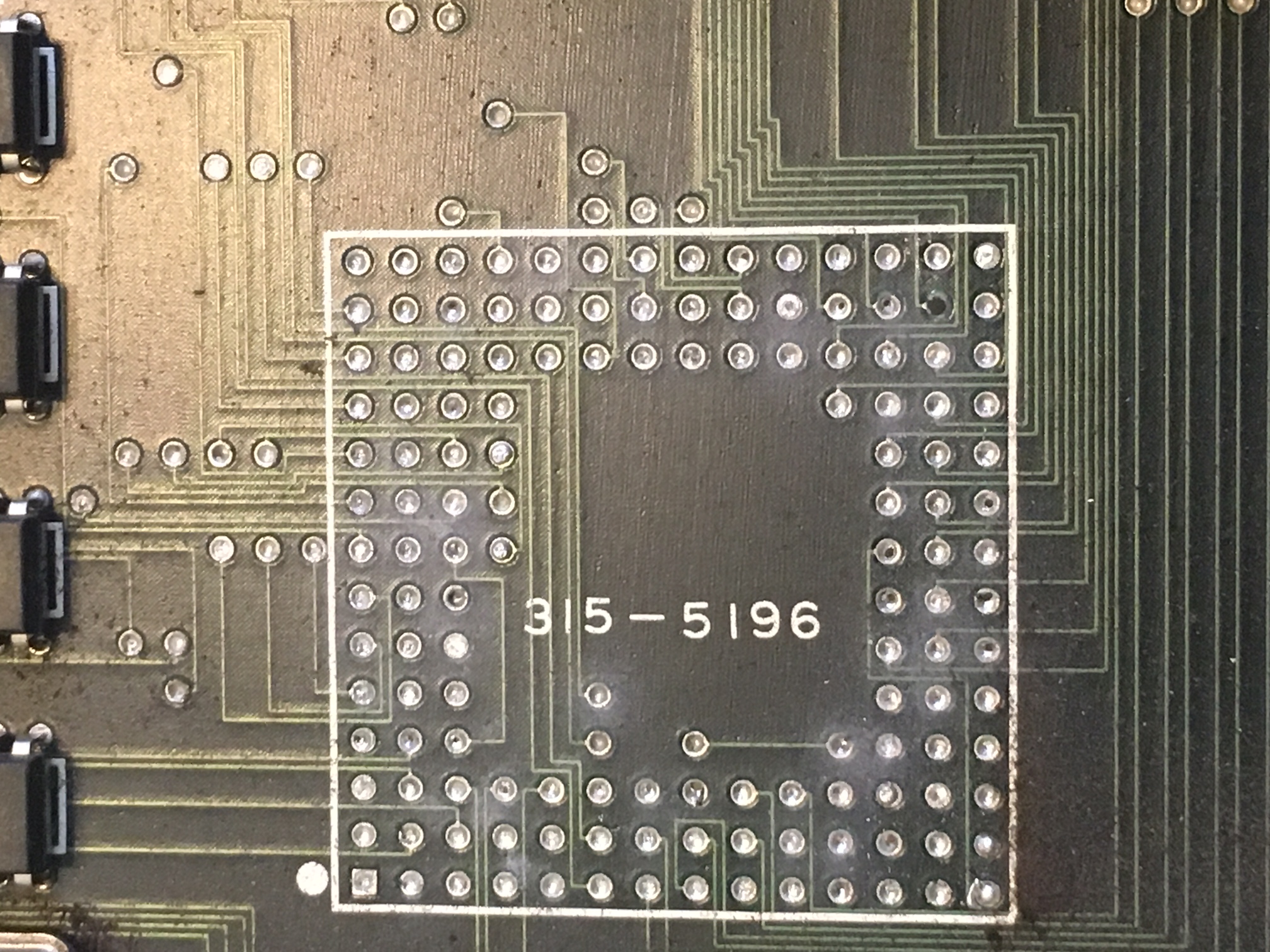 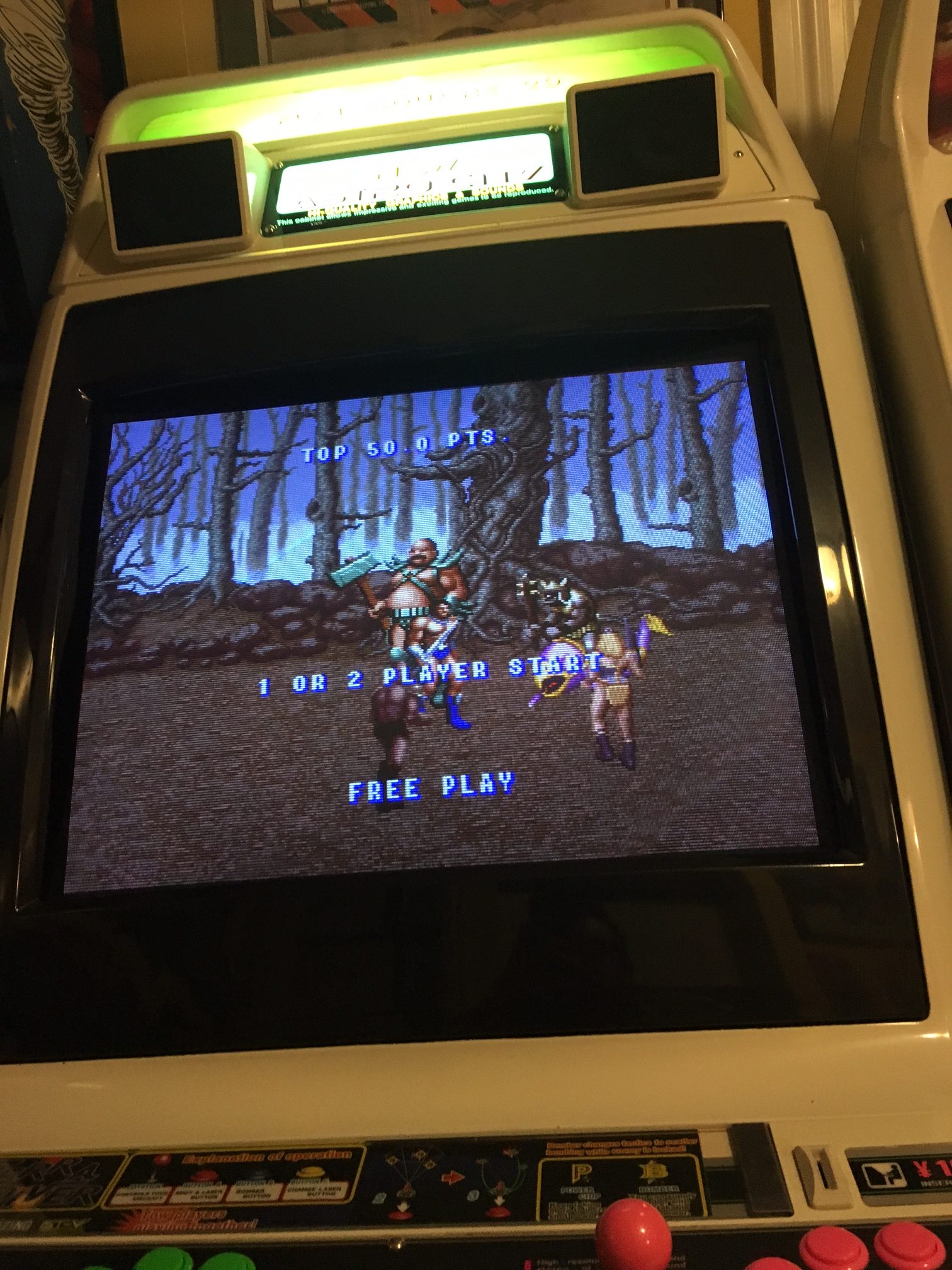 I received a “fully working” Vendetta PCB off of eBay for a reasonable price. Unfortunately when the board showed up, I immediately noticed there was something wrong with the audio. Any time a speech sample tried to play, it sounded like a static explosion! I unfortunately (maybe a good thing lol) did not capture the ear-splitting bad-audio state with video, but trust me, it was terrible!

I did not find a dedicated DAC chip on board, which is likely where the fault was going to be. I did some research and discovered the Konami 053260 IC is responsible for digital analogue conversion (DAC). 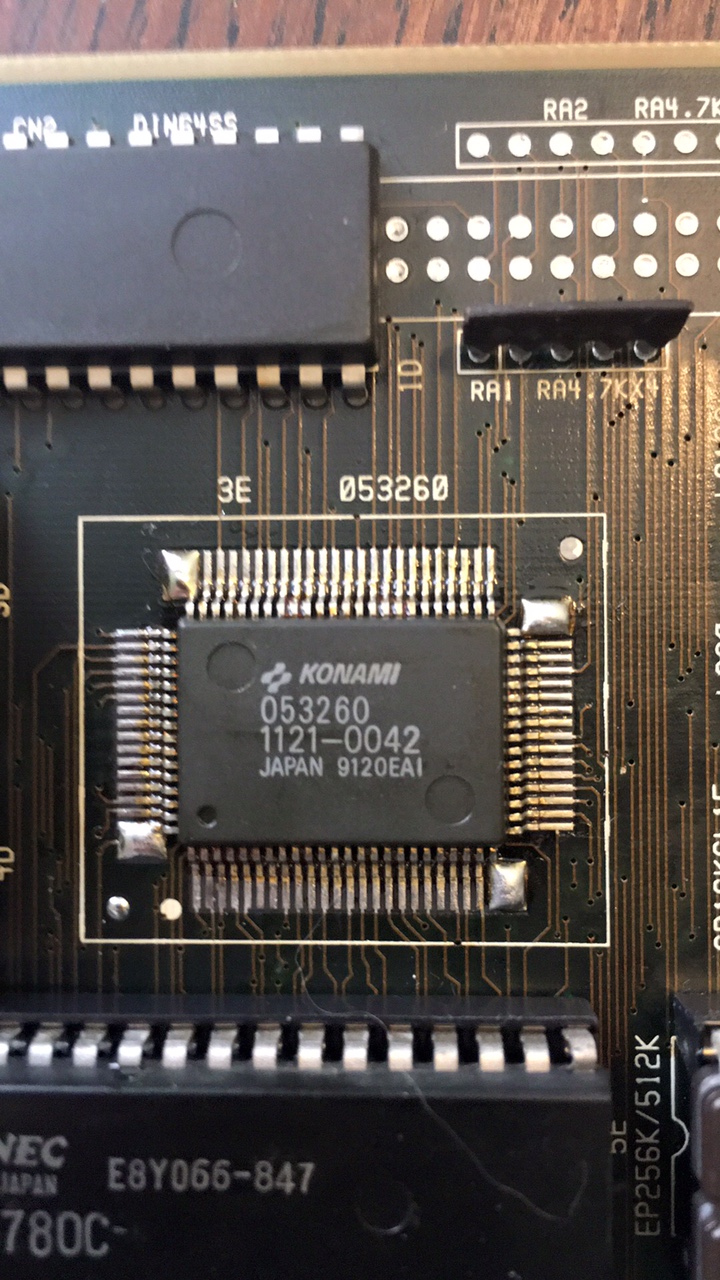 I was certain this chip was faulty, however I sadly did not have a donor on hand. After doing some research, it would seem Golfing Greats and Roller Games both have this IC on board, and they are both relatively inexpensive. I found a faulty Roller Games PCB for a reasonable price, and decided to purchase it to use as a donor for my Vendetta. I pulled out the hot air and swapped the IC: 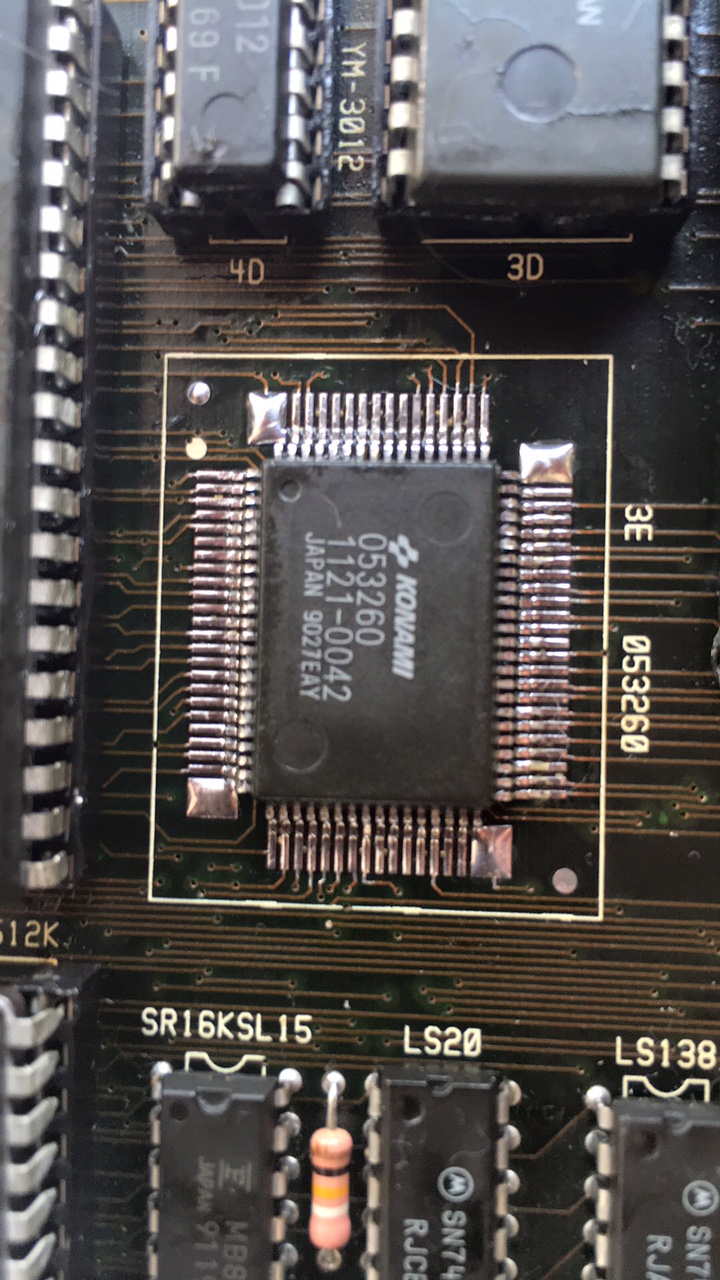 SUCCESS! All audio has been restored and the digital samples are playing crystal clear!

I received a faulty Golden Axe 2 PCB off of eBay. It arrived as advertised, very good condition, however the video sync is faulty. The seller said that he wasn’t sure if it was his equipment or if the PCB was faulty. The price was nice, so I decided to take a gamble. Unfortunately when the PCB showed up, it turned out the seller was correct – the sync was completely trashed regardless of the monitor used: 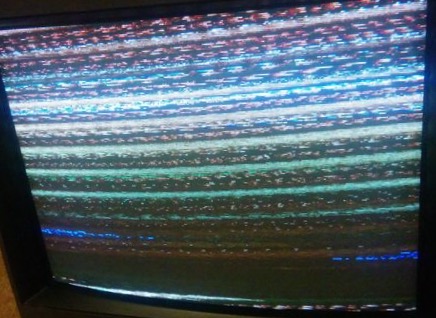 I traced the sync signal starting at the jamma edge. This was actually surprisingly difficult to do, largely due to the very small traces Sega used, not to mention the signal starts on the solder side and ends on the parts side (switching sides a few times). After some poking around, I found the sync signal goes DIRECTLY to IC73 (Sega 315-5388). Mame source notes describe this as a “sprite mixer”. Since the sync signal goes directly to pin 42 of this IC (with literally nothing but a ferrite cap in between), I decided this IC was likely faulty. Out comes the hot air… 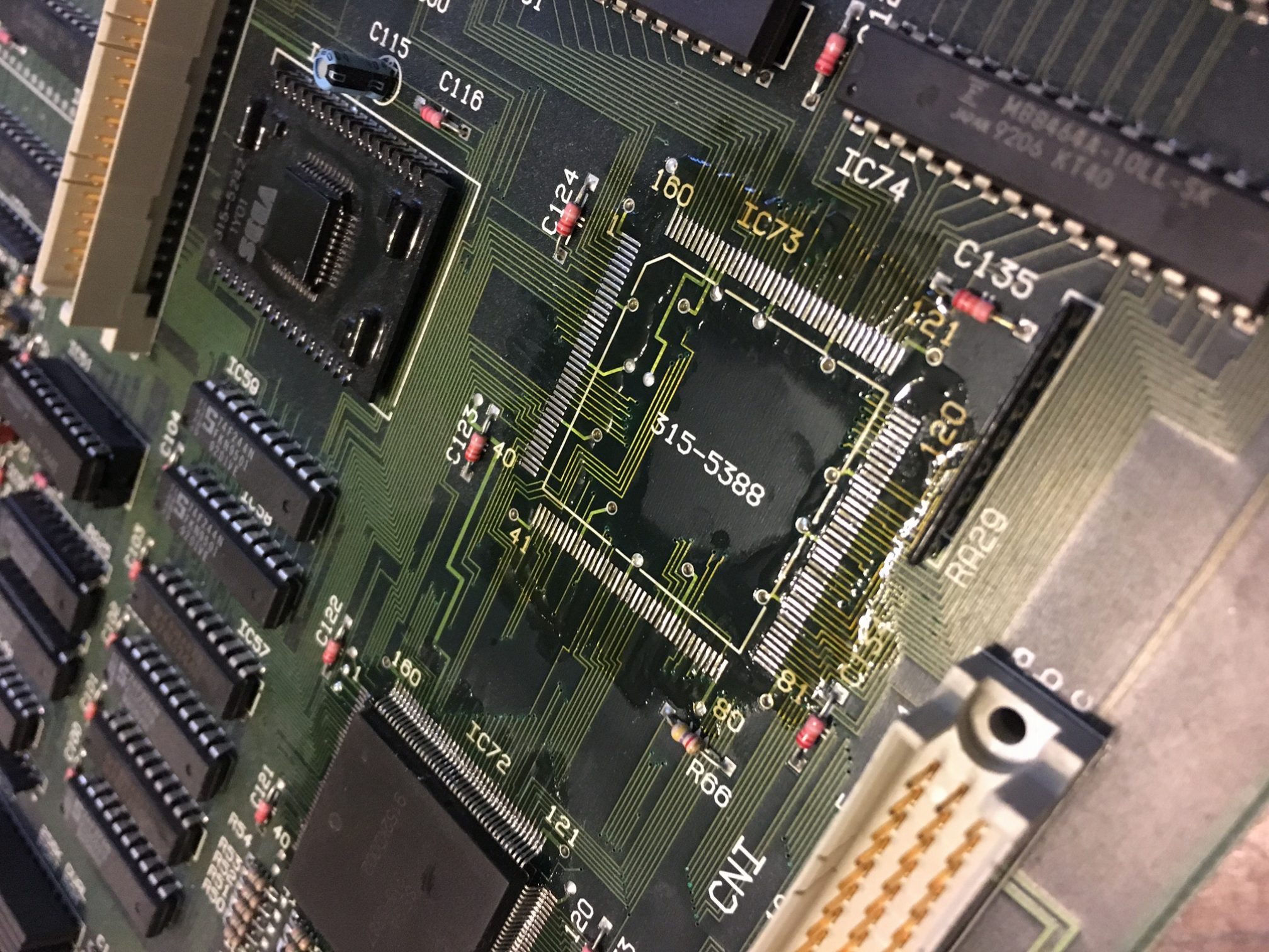 I pulled a donor IC from another Sega System 32 motherboard that I have that has sustained damage to the PCB. It is beyond repair, but great for donating IC’s such as the 315-5388! I installed the freshly pulled IC to Golden Axe’s motherboard: 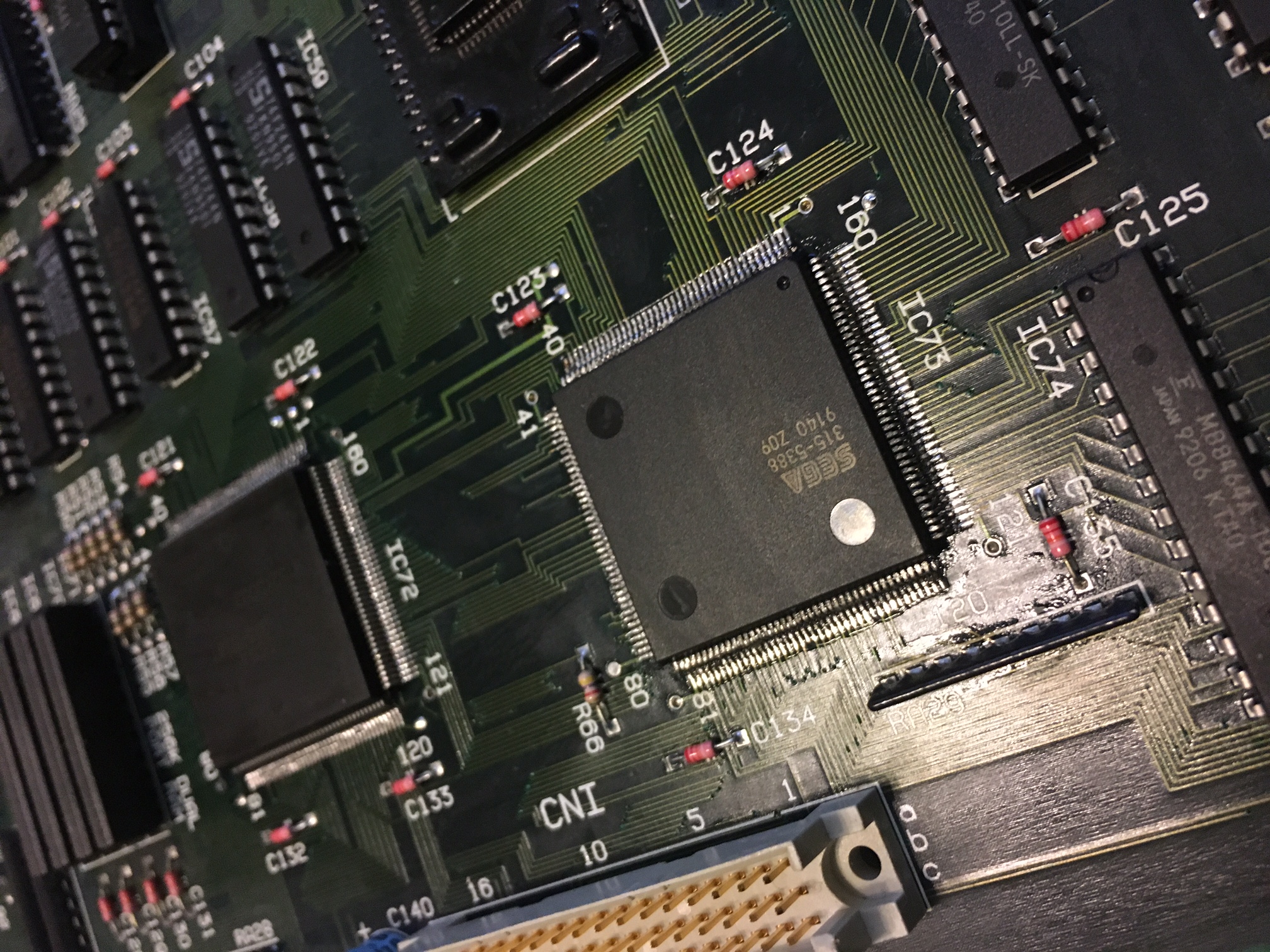 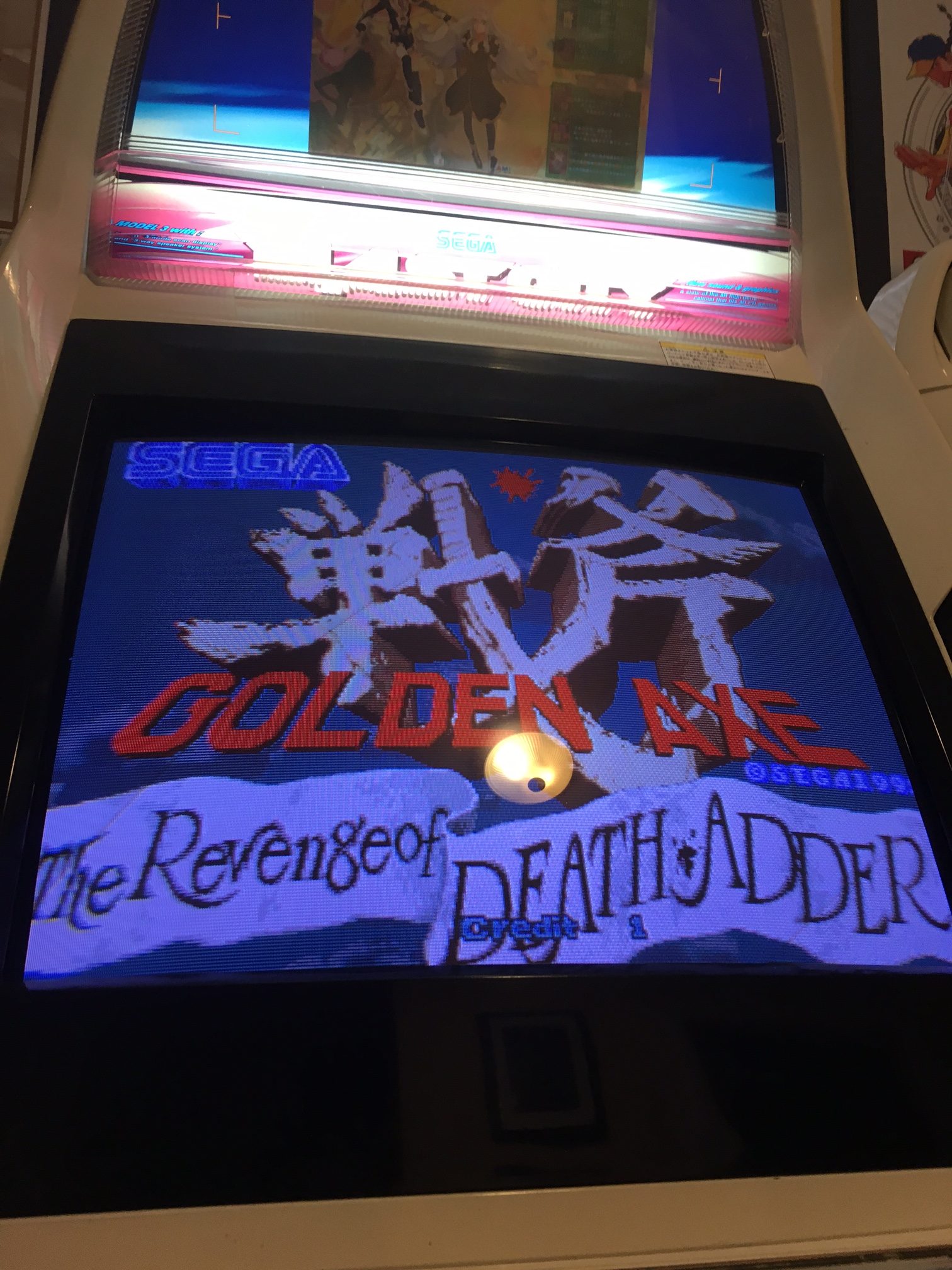 SUCCESS! The Sync signal has been restored, not other faults are observed. Game is now fixed, working 100%. Another great game has been saved!