Got this rare Big Fight – Big Trouble In The Atlantic Ocean (this is the full title) PCB for a repair : 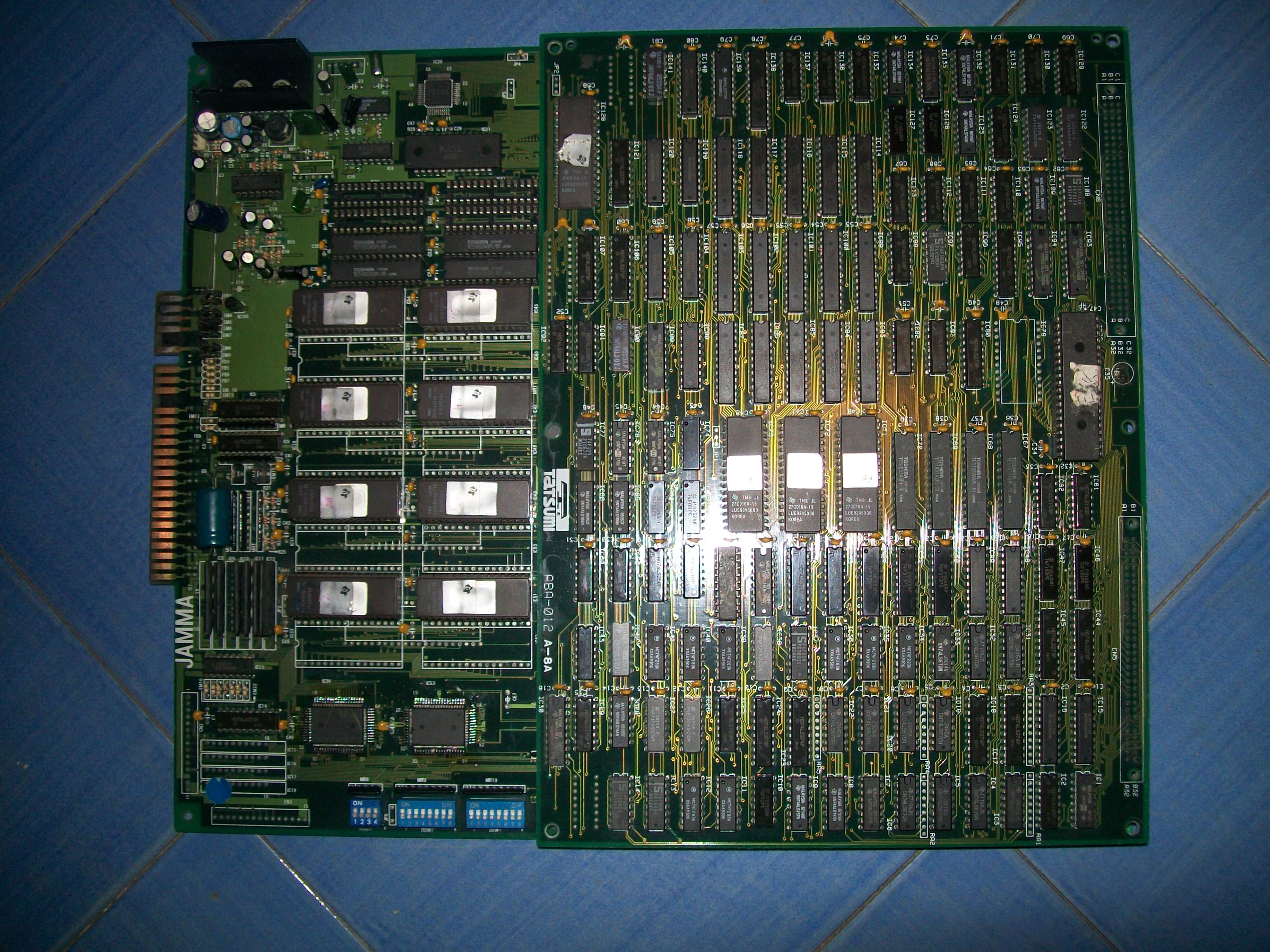 For the uninitiated game a beat ’em up which resembls Final Fight but it features also a versus mode.It was developed and published by the obscure Tatsumi manufacturer in 1992, it was one of their last arcade game before focusing on novelty sticker printing business.

The board was completely dead, I got only a black screen.The hardware is complex : two 68000 CPU, a large PGA sprites custom IC, many PLDs, lots of RAMs.Here is picture with the daughterboard removed: 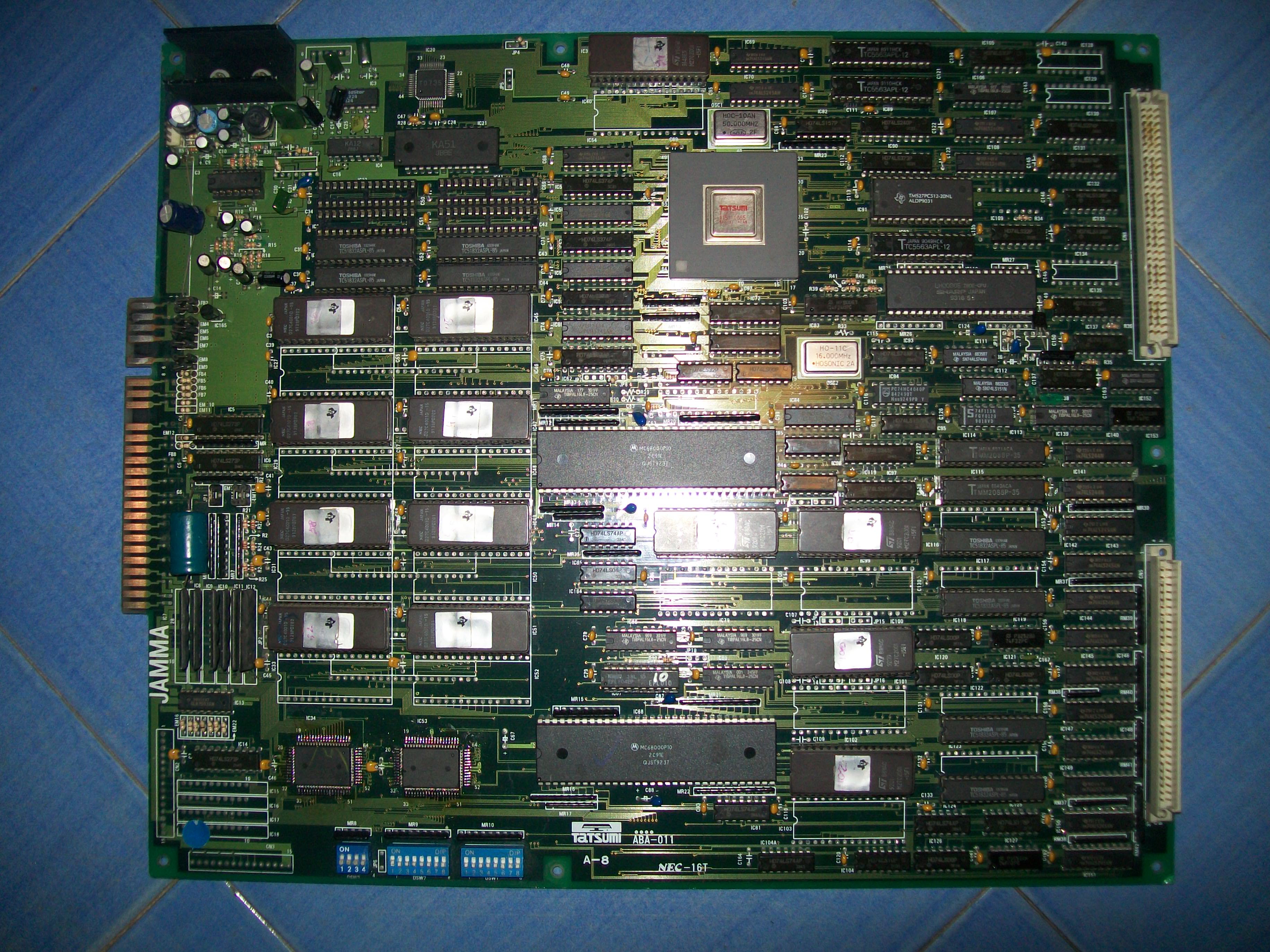 Probing the two 68000 revealed no clock, master clock is generated by a 50MHz oscillator and then divided by 4 in order to route a signal of 12MHz to both CPUs: 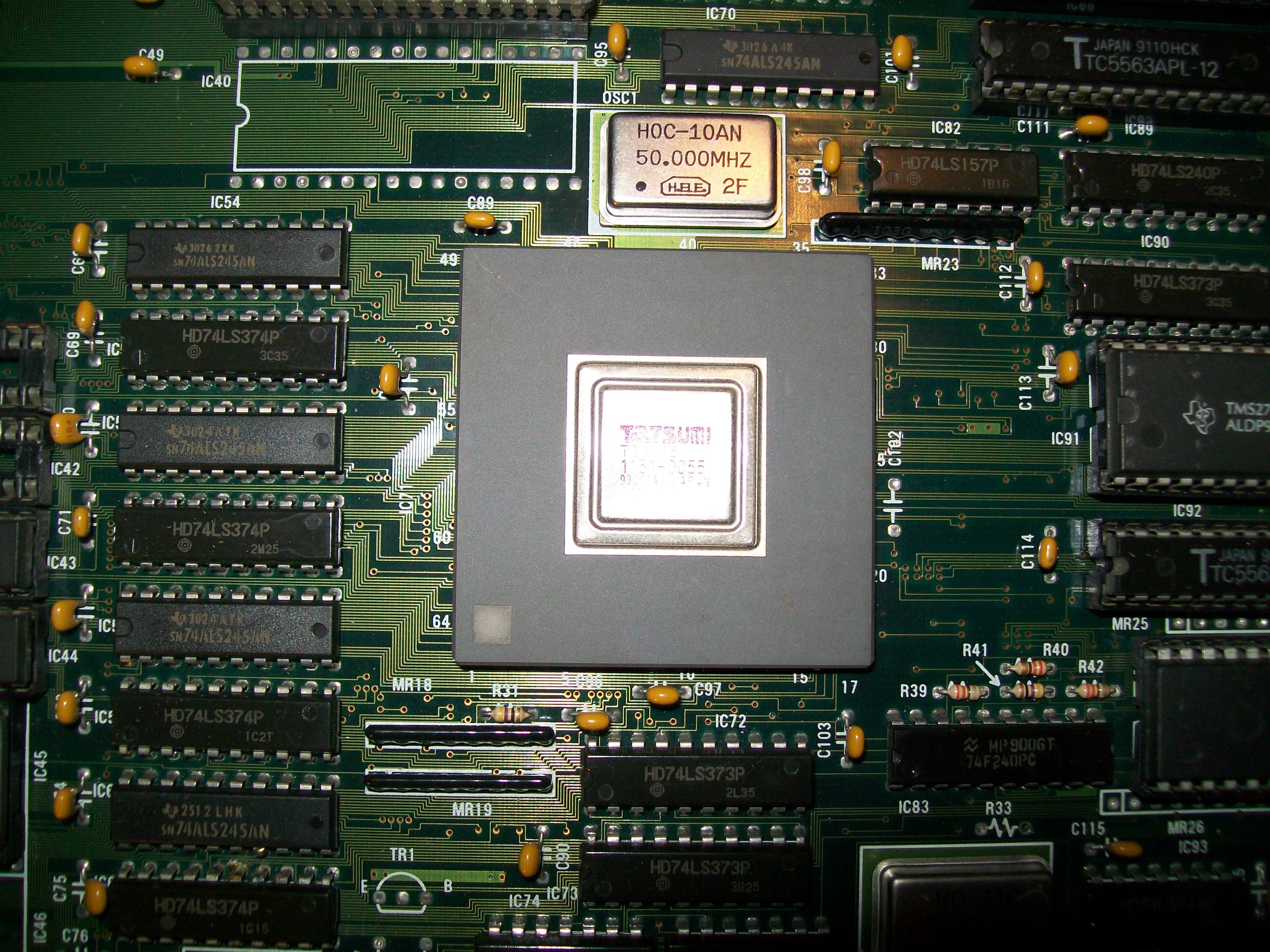 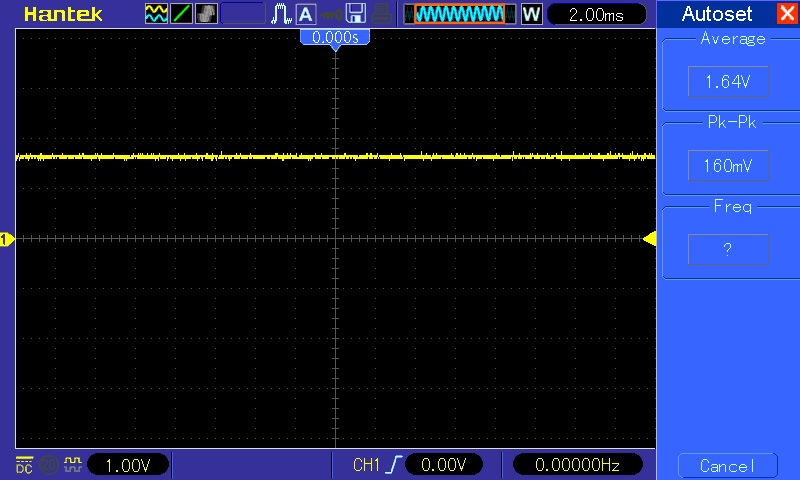 I removed it and the its VCC pin was stuck on PCB detached from the package due rust corrosion: 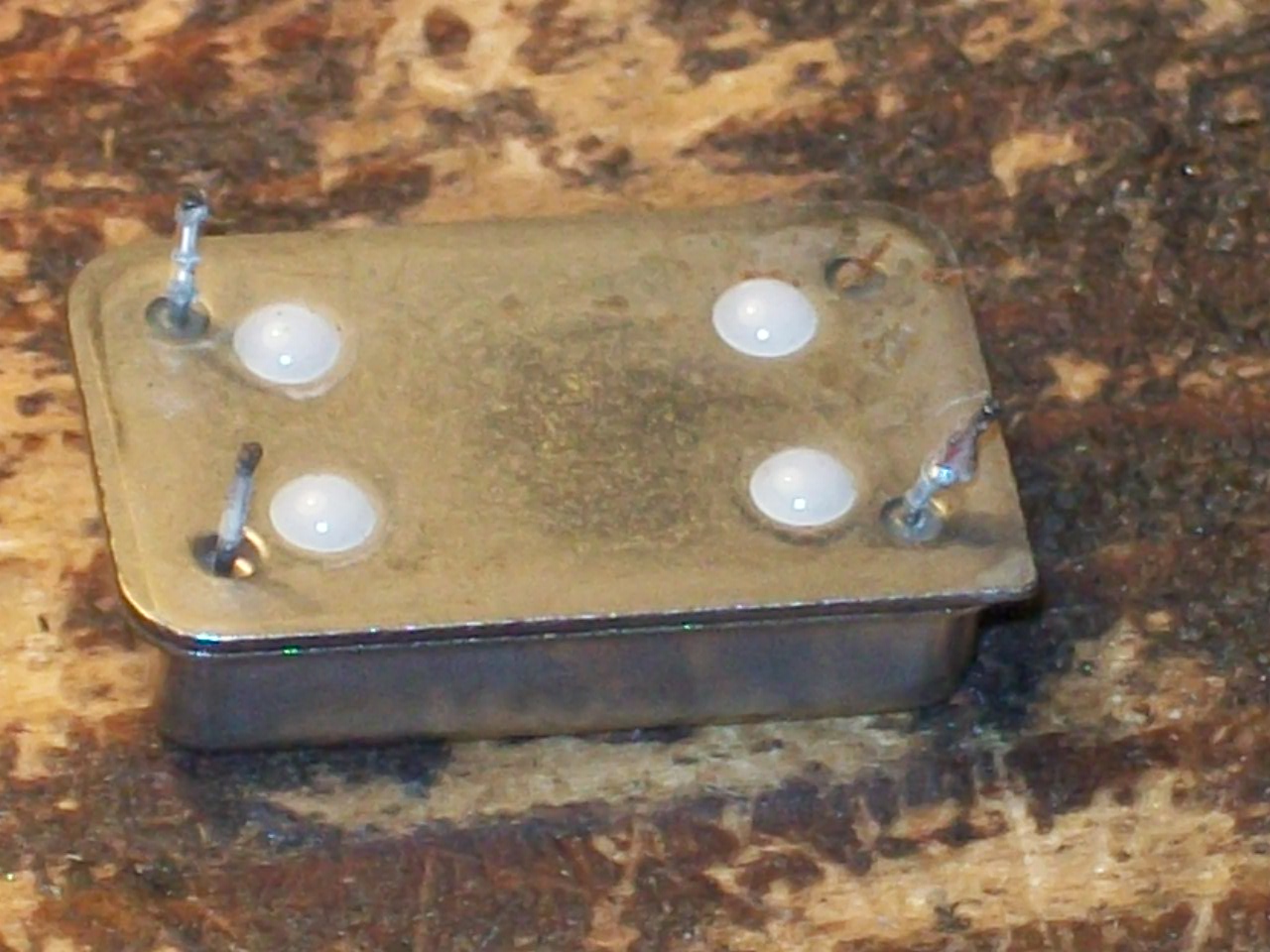 Fitted a good oscillator and board sprang to life although with bad graphics:

Doing a visual inspection I found four empy sockets, according to the MAME source PCB layout and pictures on the Net they had to accomodate four TC51832 32K x 8-bit pseudo-static RAMs besides the other four present: 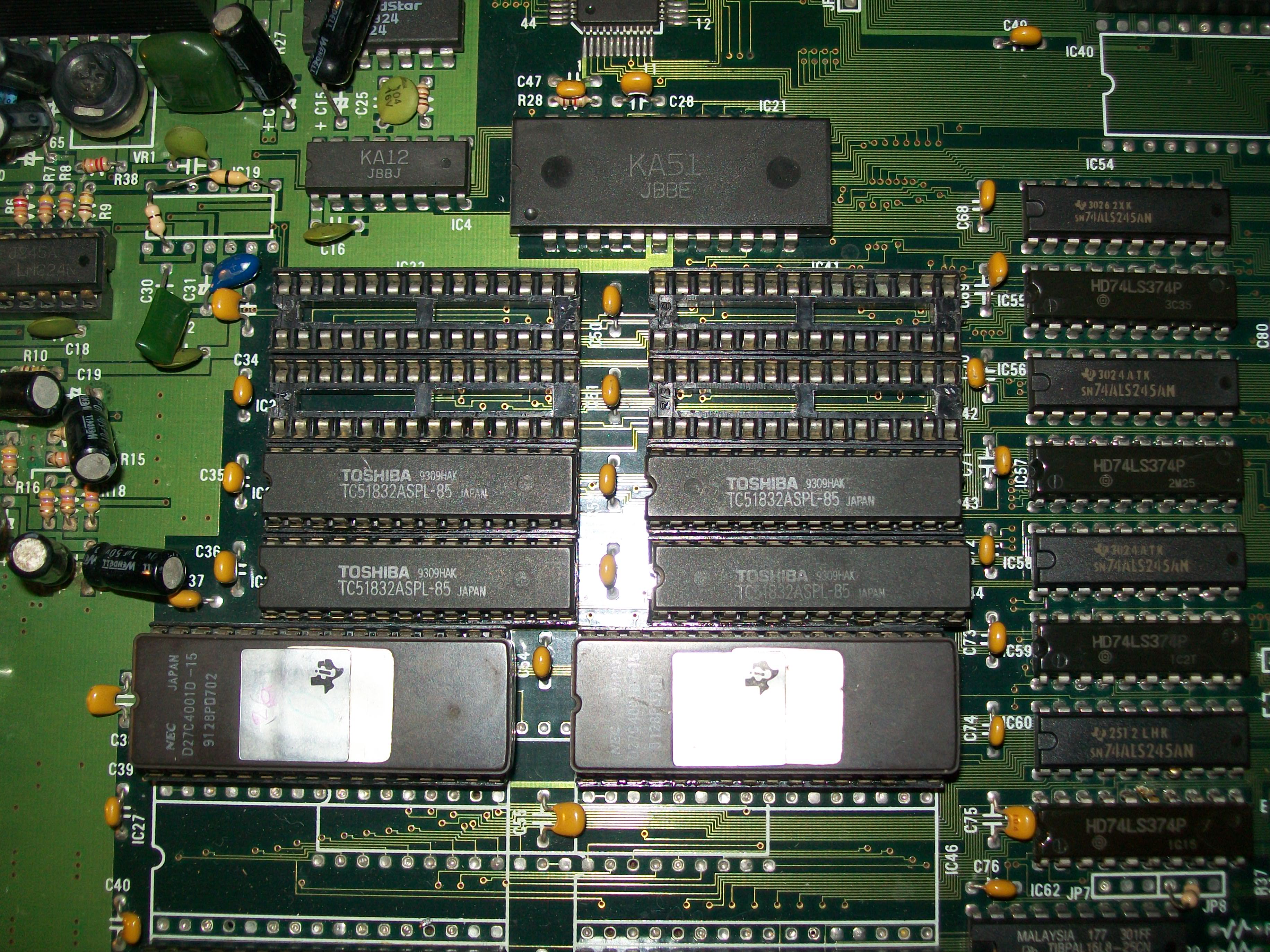 Once fitted the four missing RAMs most of graphics were correctly displayed but sprites were absent :

The sprites are generated by the PGA custom ‘TZB315’ (see picture above) so I went to probe the surrounding area and found discrepancies between inputs and outputs of some 74ALS245 which are in the middle of ROMs and custom data bus:

I replaced them and, although they resulted good when tested out-of-circuit, I got sprites back although scrambled  : 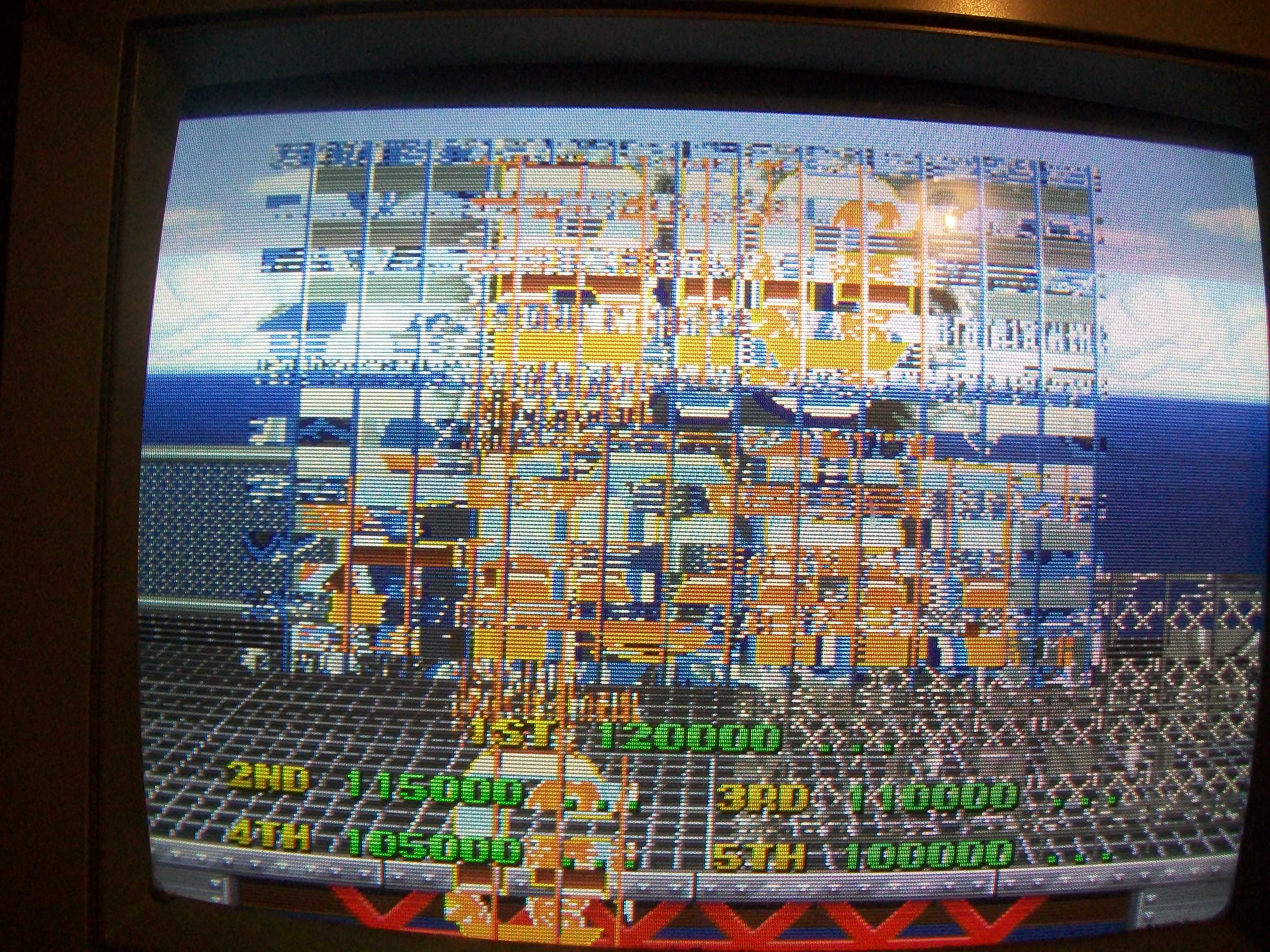 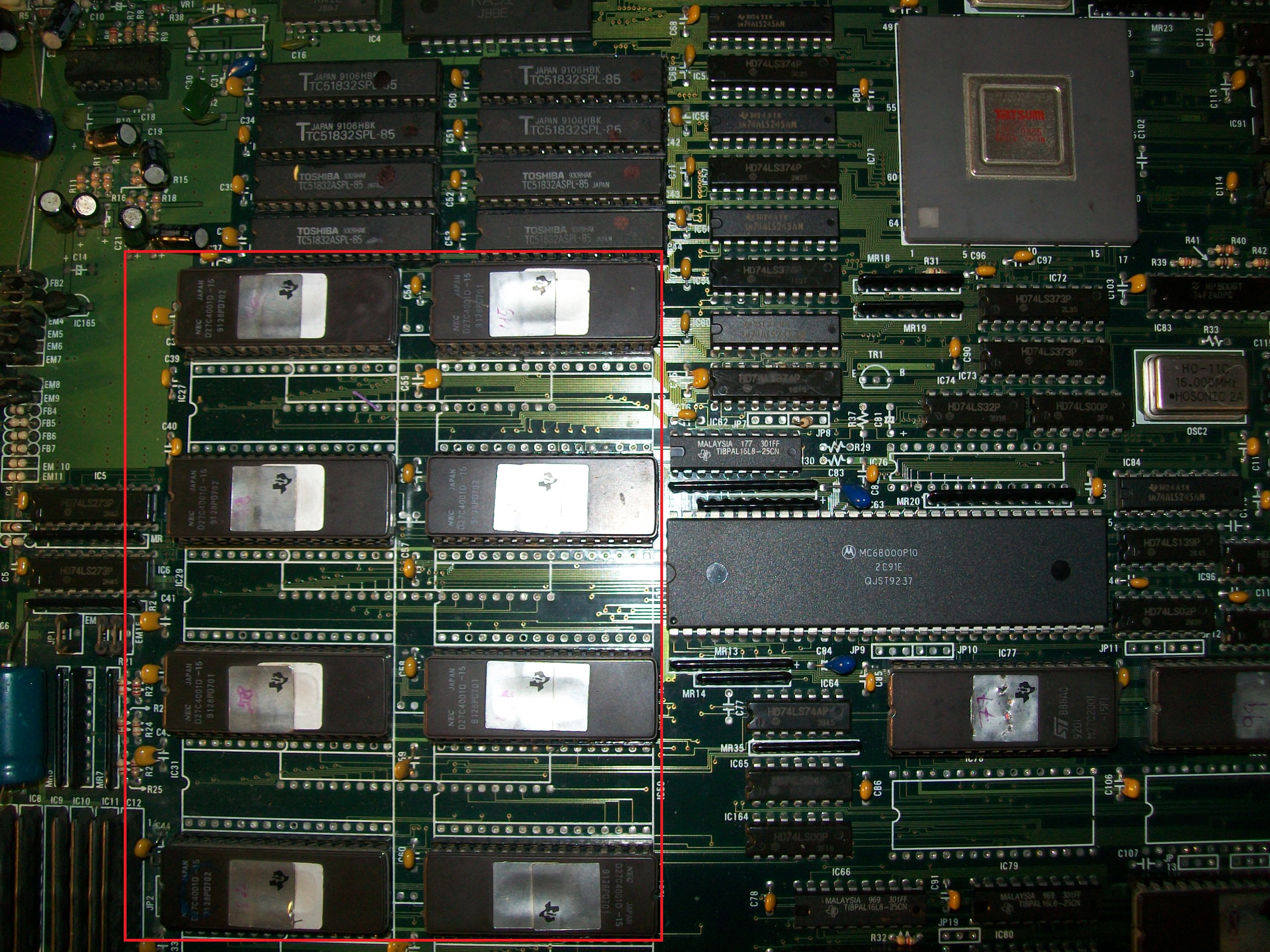 I dumped them and they matched the MAME ROM set but I noticed some of them had oxidized legs: 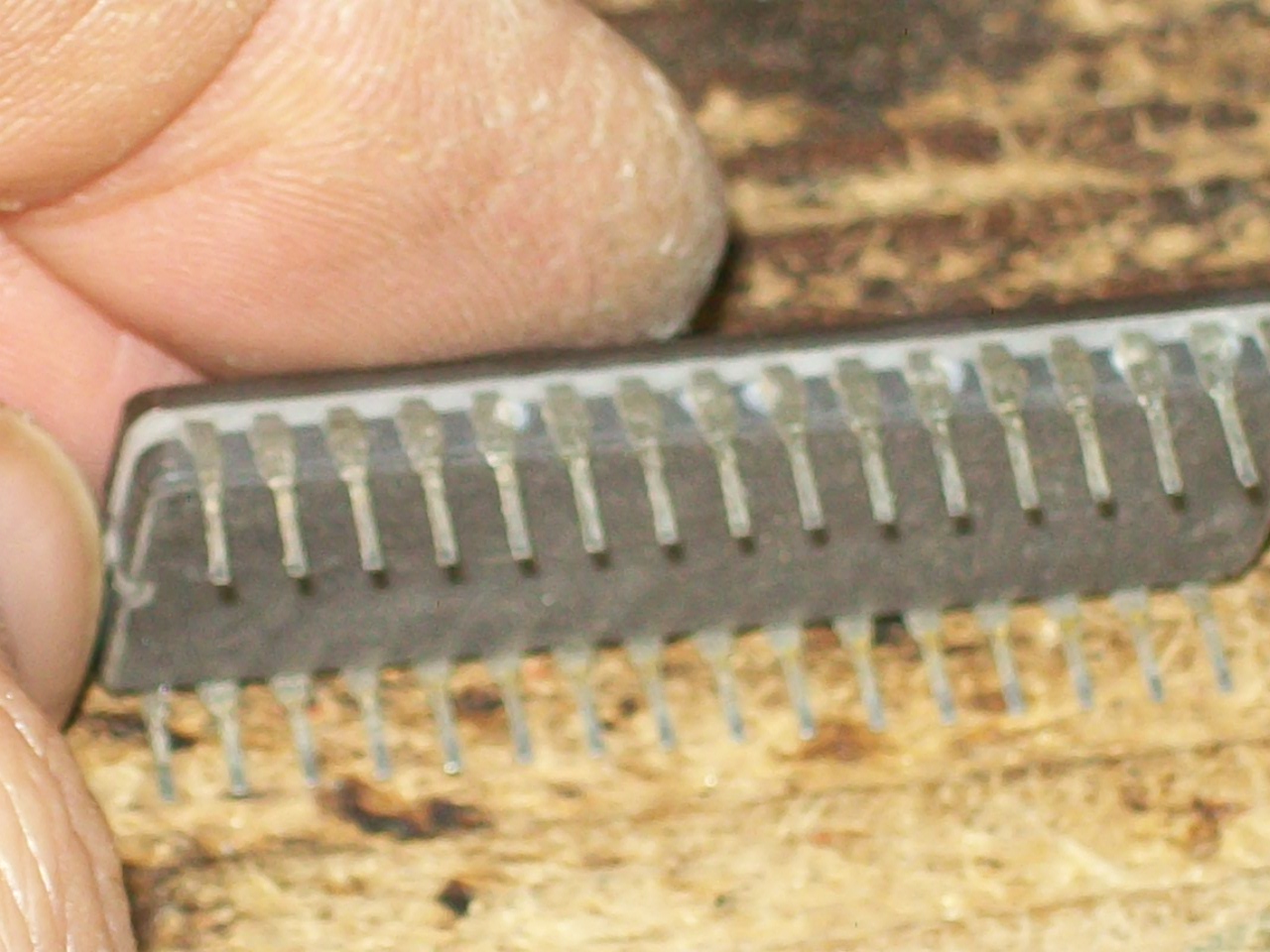 I cleaned them and at same time replaced a device with a dodgy pin: 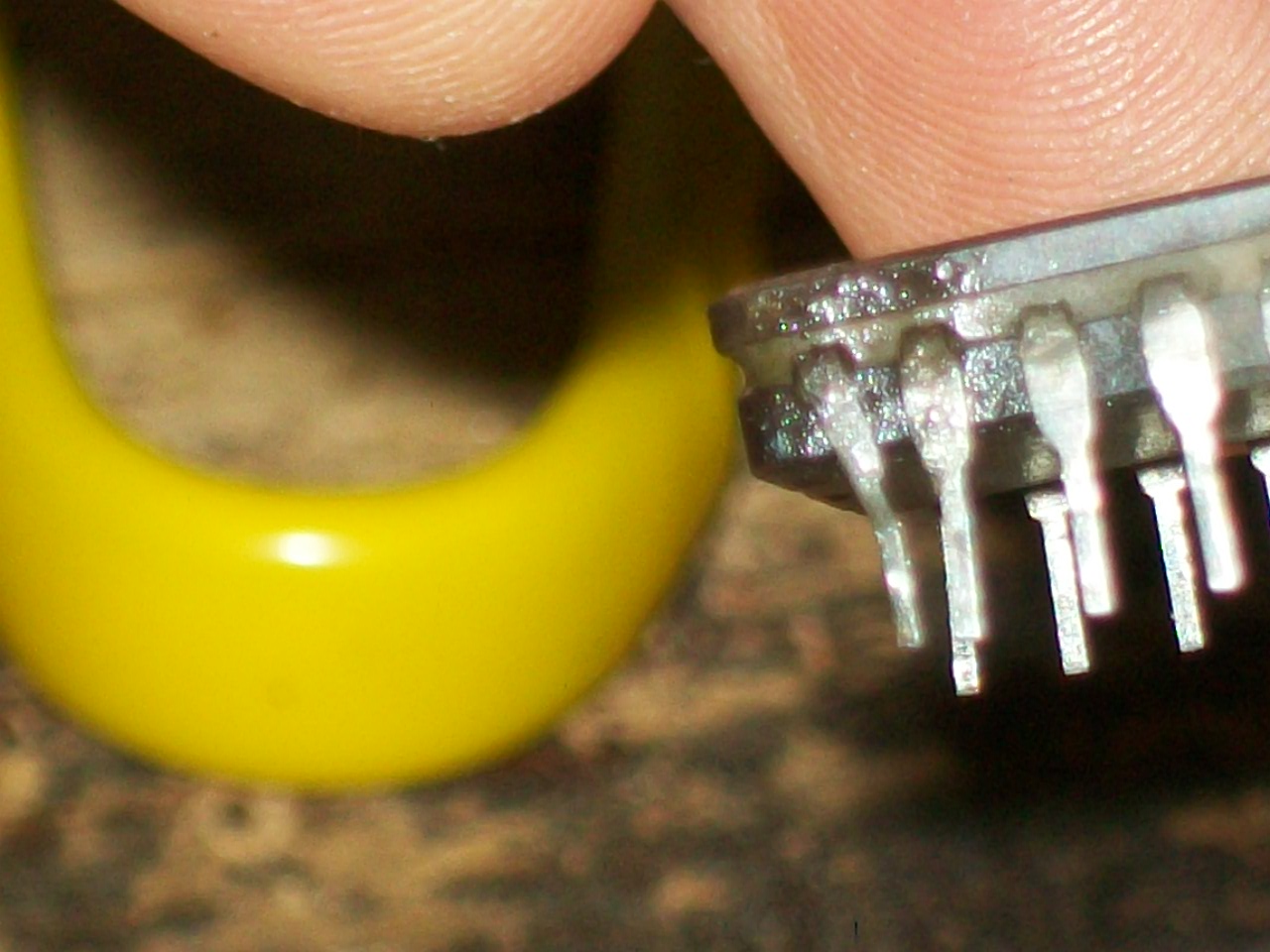 But as you can see (or better, hear..) in the above video, sound was sometimes noisy and some voice samples were missing (like helicopter when you start a game or voice of special moves and enemies).

Here a recording from a working PCB for comparison:

The background noise was due a dirty 50KOhm potentiometer, I removed and sprayed it with a contact claner : 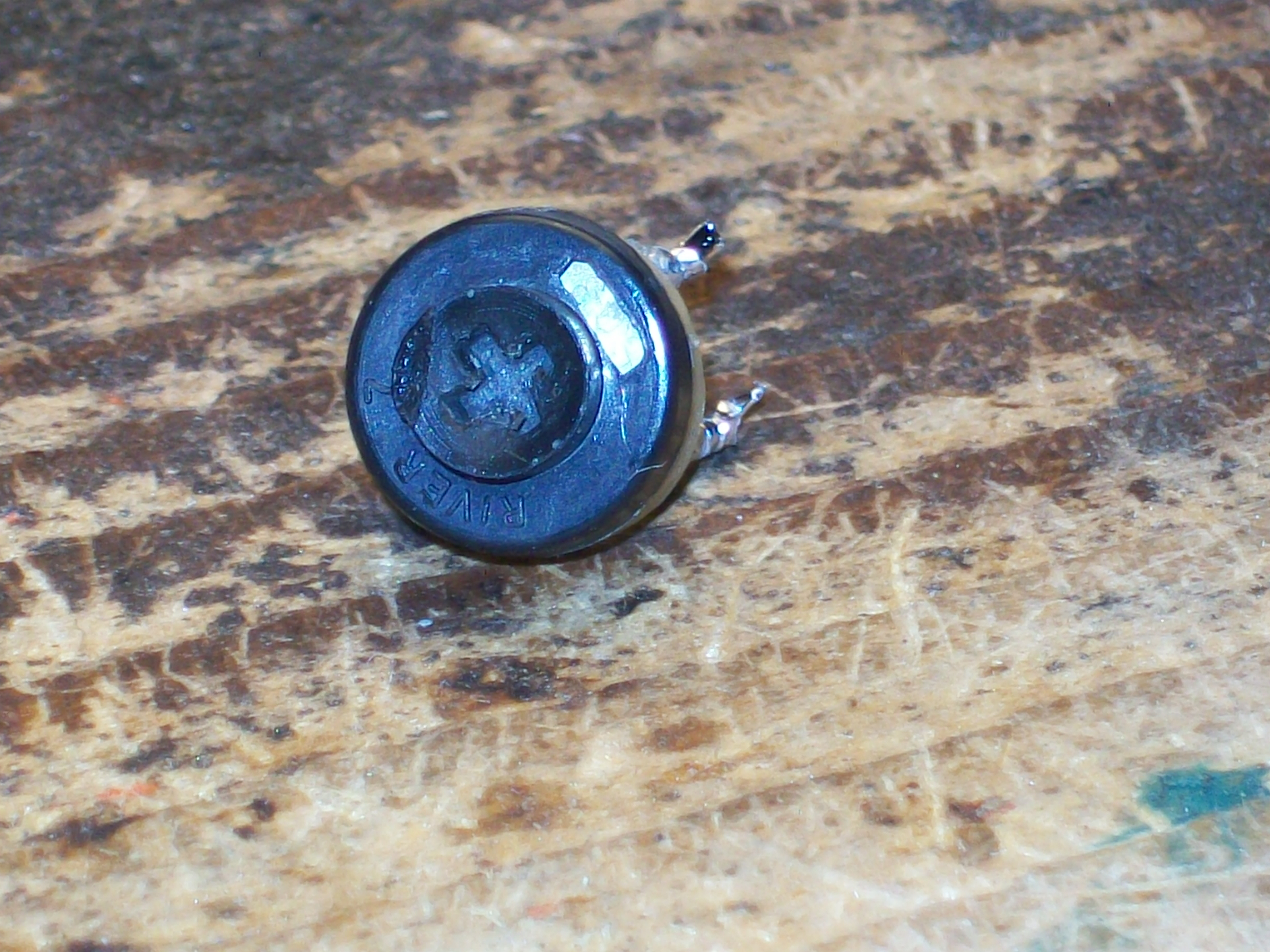 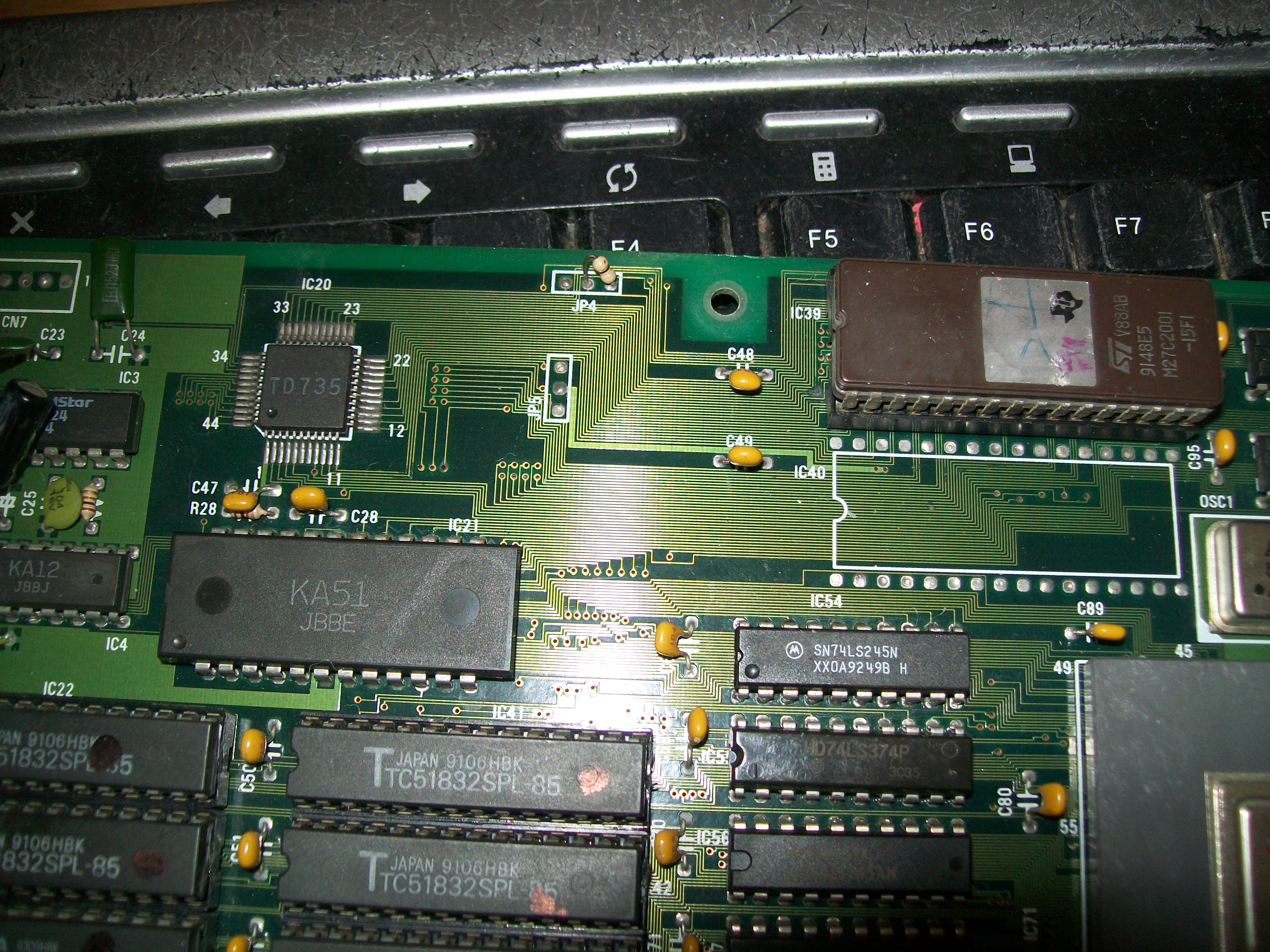 The dump of the EPROM was good, I also replaced the OKI with no luck.Probing the EPROM revealed that pin 30 (address line A17) was always LOW so the second half of the voice data could be not accessed.Doing a check with my multimeter revealed thas this pin was tied to pin 22 (/CE), this obvioulsy sounded me weird.Near the EPROM there was a jumper installed @JP4: 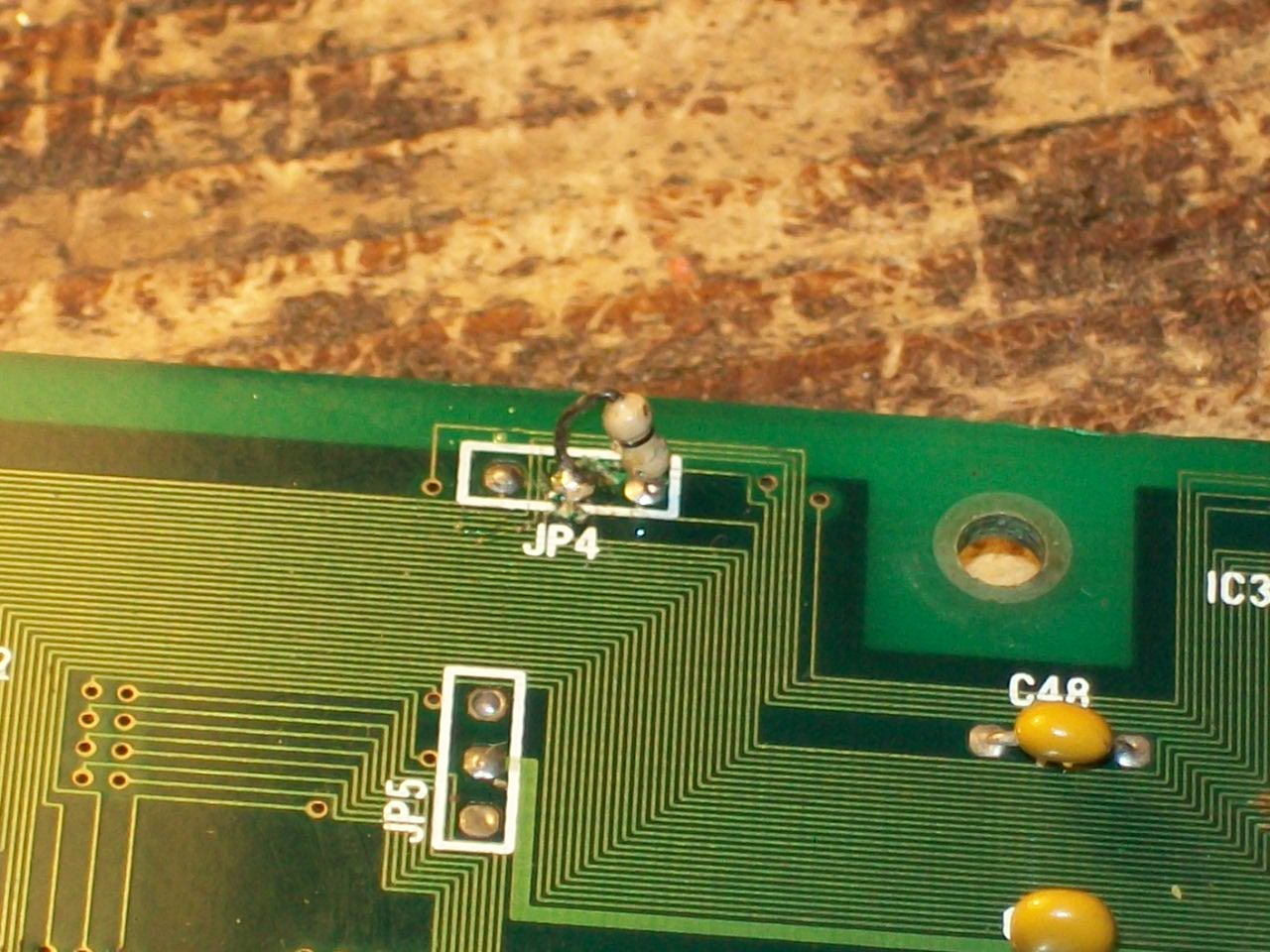 Looking at PCB pictures on the net I had confirm that the jumper had to be set in this configuration.But looking at its solderside I noticed a trace which connected  the central pad to the left one.This obviously, along with the jumper installed in that position, caused the short between the left and right pad resulting the two signals being tied together.So, I cutted this trace: 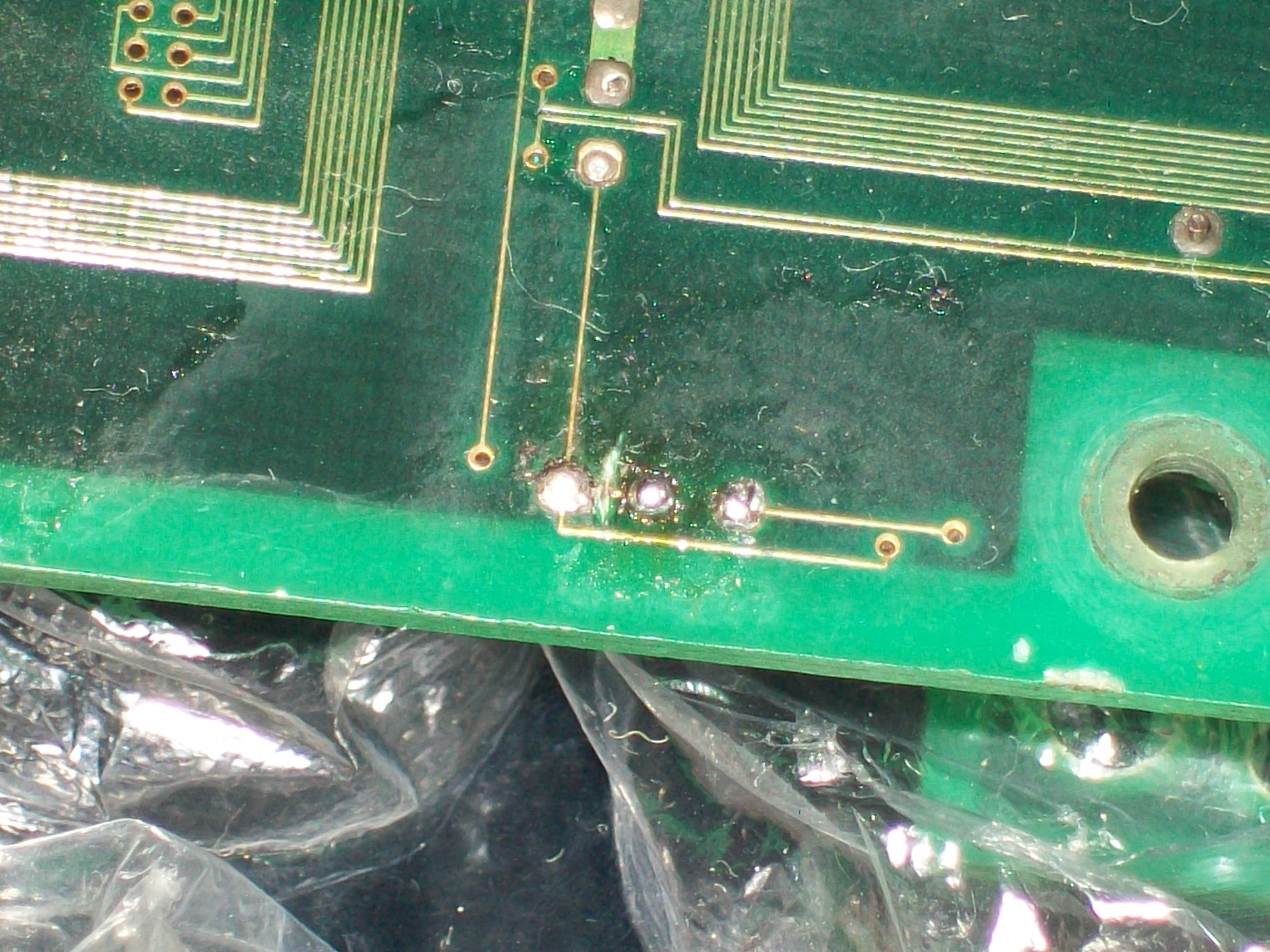 This restored the missing voice samples.No further issues were found so board 100% working.