I recently got two Operation Wolf boards from Muddymusic to fix.
This board was not booting at all and I got a screen full of flickering garbage 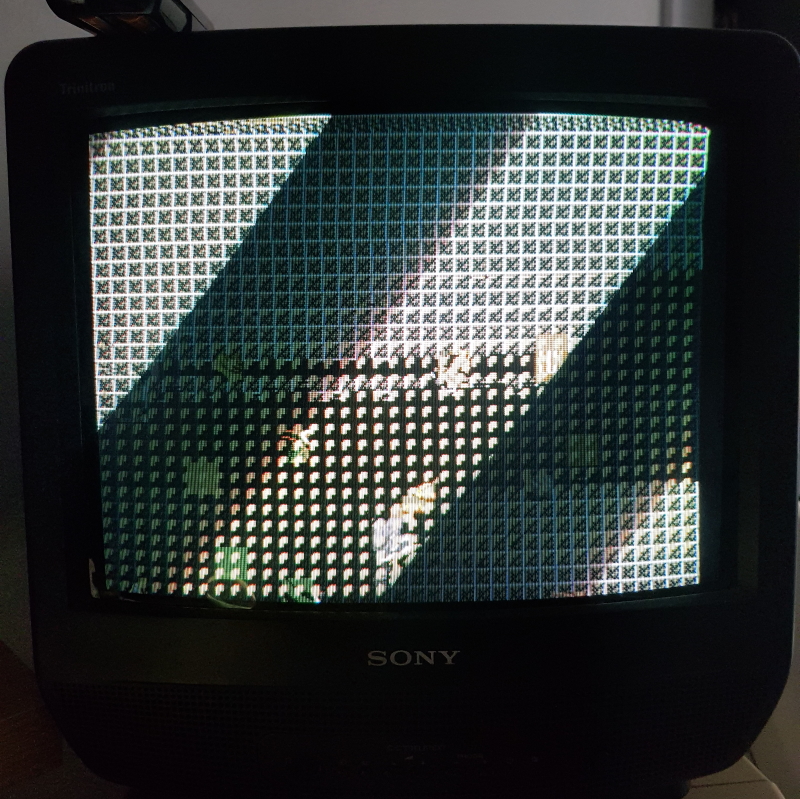 I removed all four of the 27C512 program EPROM’s and verified they were good. All of them matched the “World, Set 1” version in MAME. 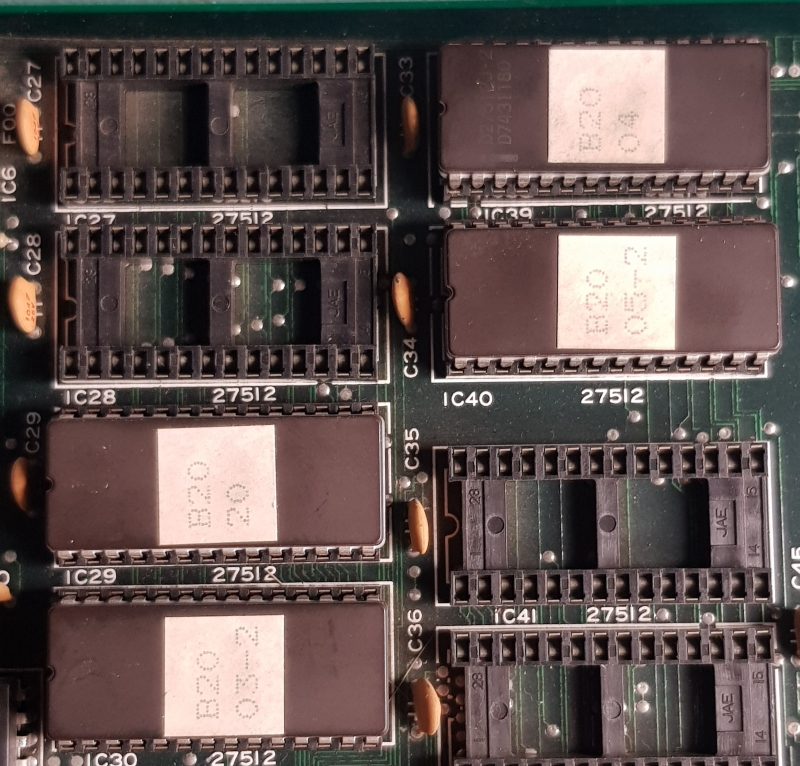 I confirmed continuity between all the address, data and control pins of both EPROM’s and RAM was present and correct and it was so I opted to remove the two TMM2063 work RAM chips and test those 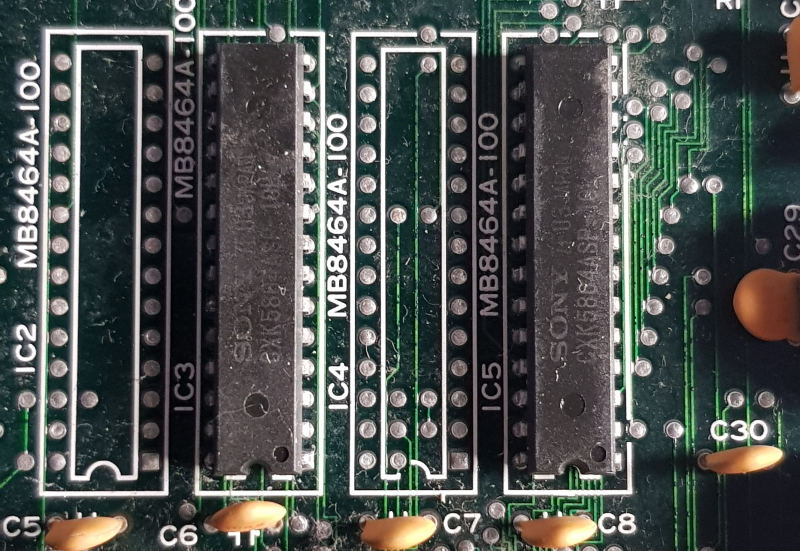 As you can see both failed. I replaced them and tested but there was no change.
Next I started looking at the reset circuit.

Here is the main reset circuit taken from the schematics 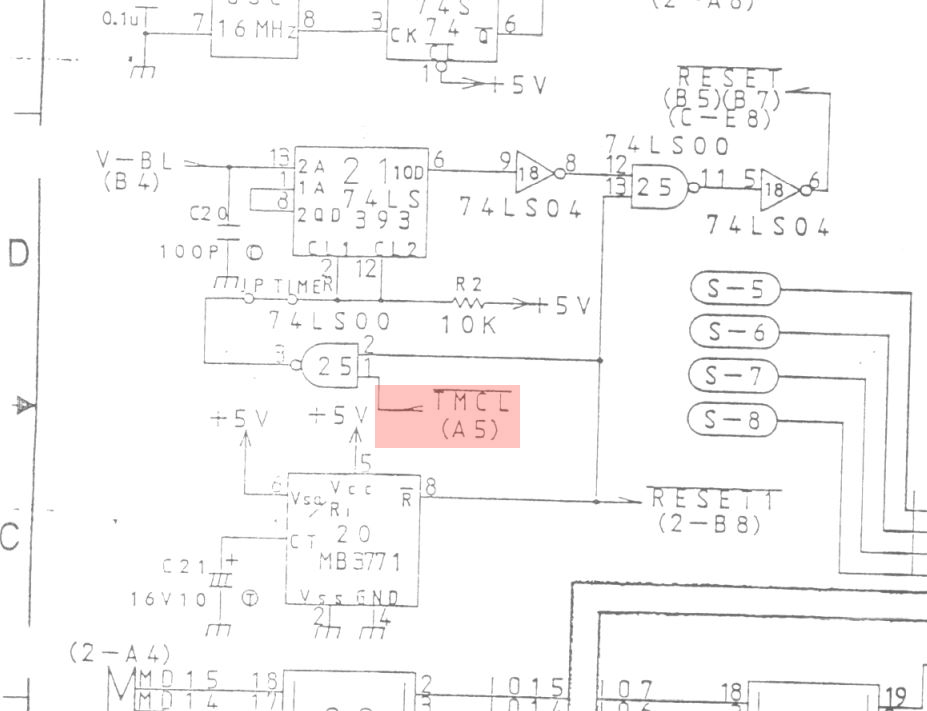 Using the logic probe I found that signal “/TMCL” (timer clear) was floating. Shifting focus to grid A5 on the schematics we see that this signal comes from pin 13 on the 74LS138 at location IC60. 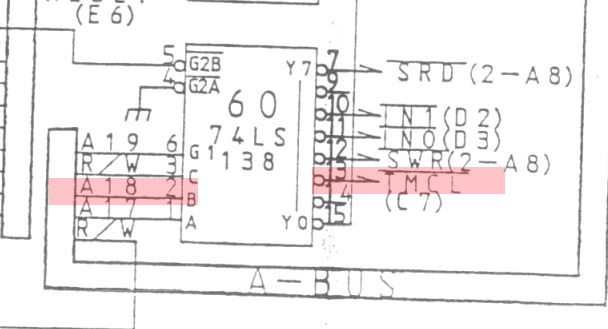 Further probing found that the A18 signal on pin 2 was also dead. This signal is the buffered MA18 (address bus pin 18) and comes from the 74LS244 at location 65. Checking the signal on the LS244 revealed that it was present so there was a break in the trace some where.
I couldn’t see anything obvious so I patched it with some Kynar wire 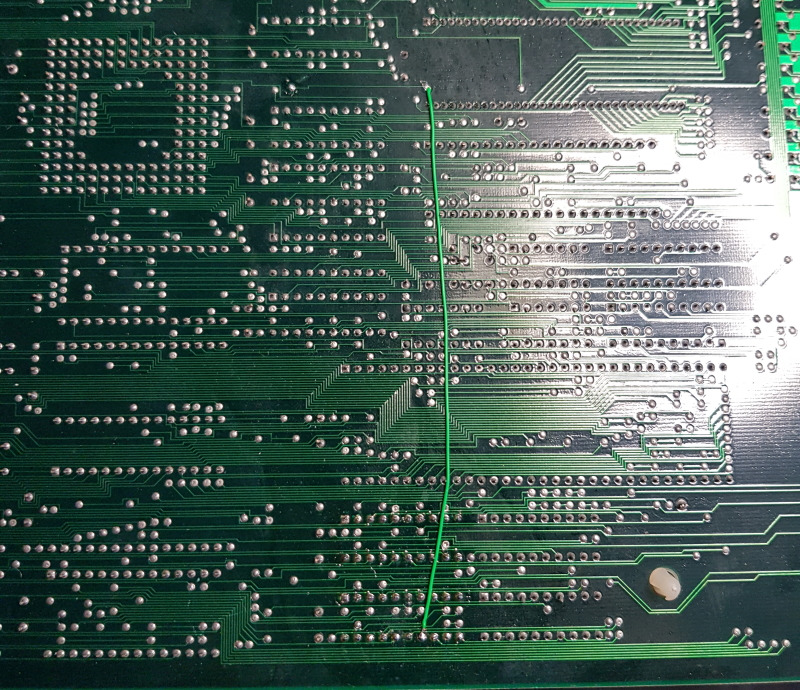 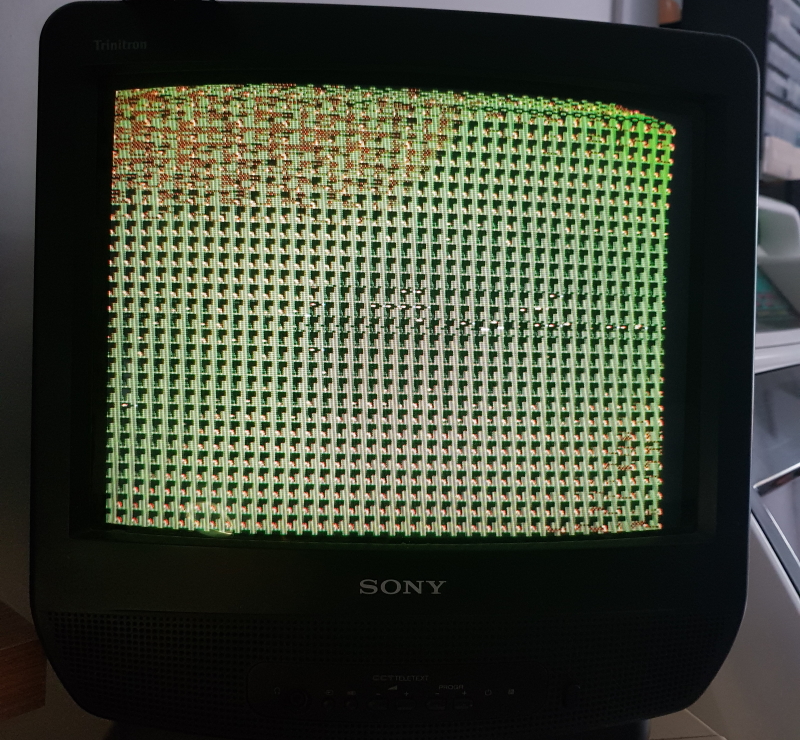 Next I started looking at the custom PC080 tilemap generators, more specifically the RAM connected to it 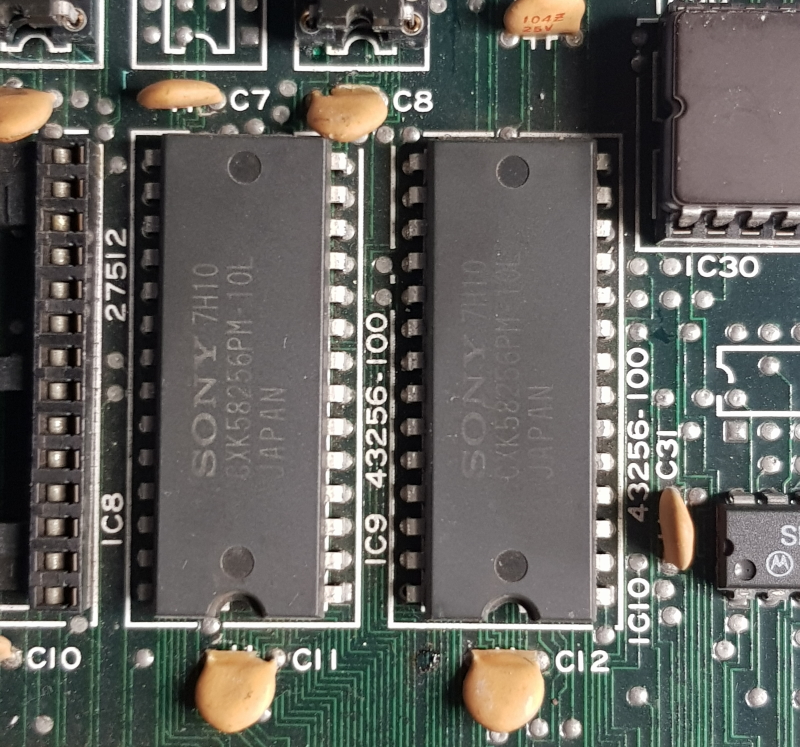 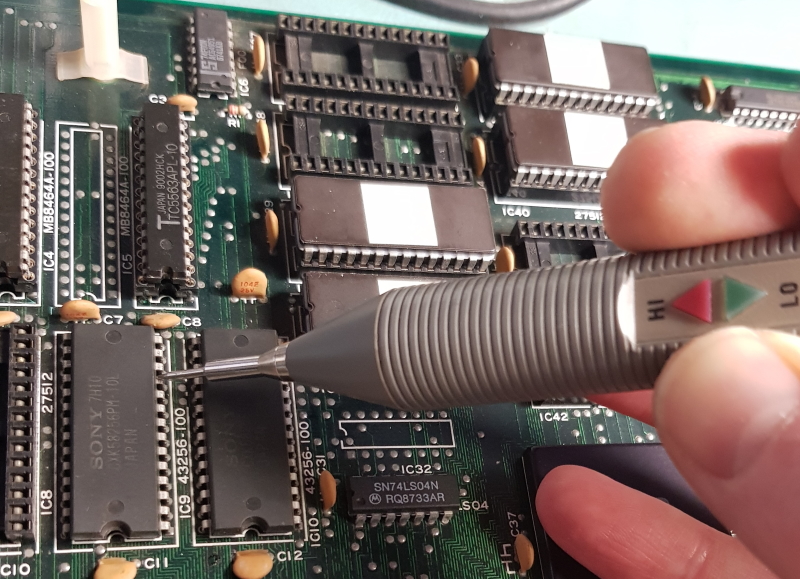 I removed both of them and checked them, obviously both failed

Replacing both of these now gives me something to see.
In test mode I get this 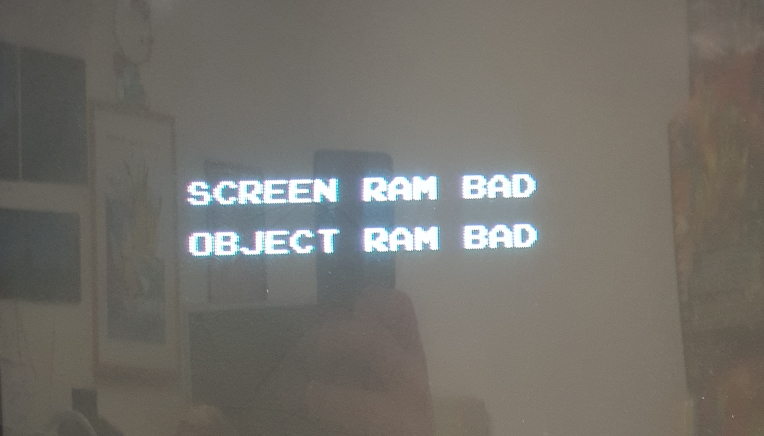 I looked into this fault for a good hour or so before I decided the RAM I fitted was too slow. Swapping for a faster RAM type fixed both of these issues.

Now the board would successfully pass the self test in the test mode I could see that I had an issue with colours. 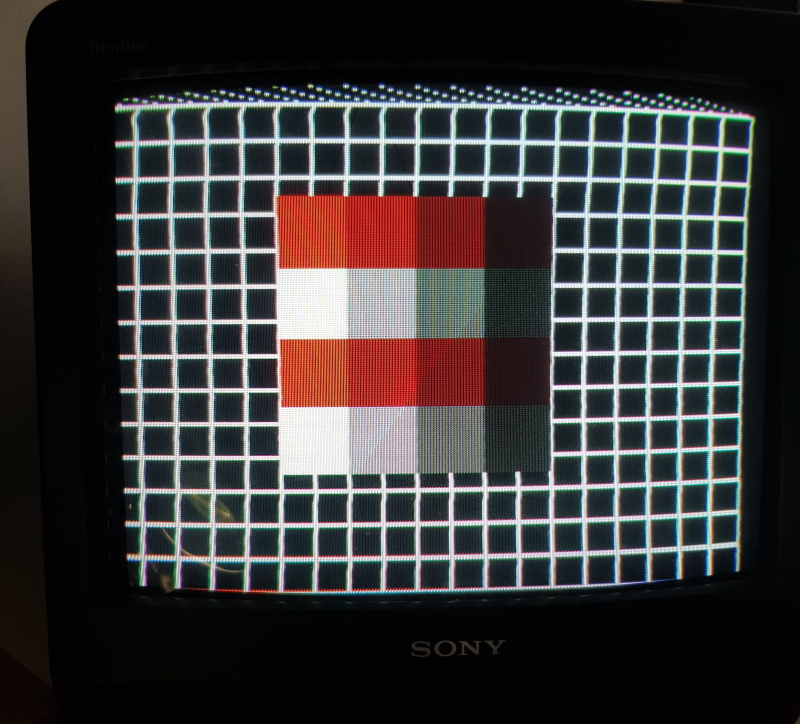 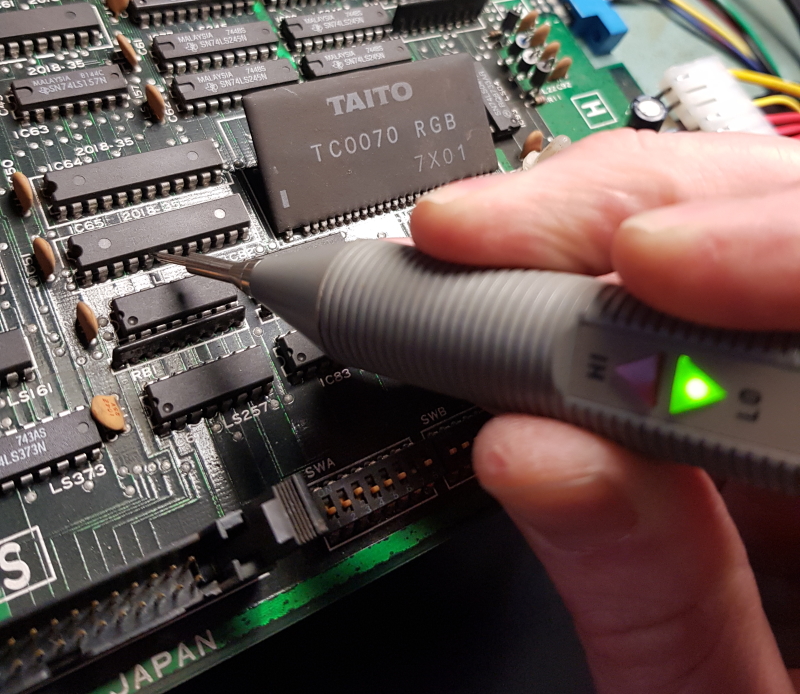 Replacing this gave me my colours back 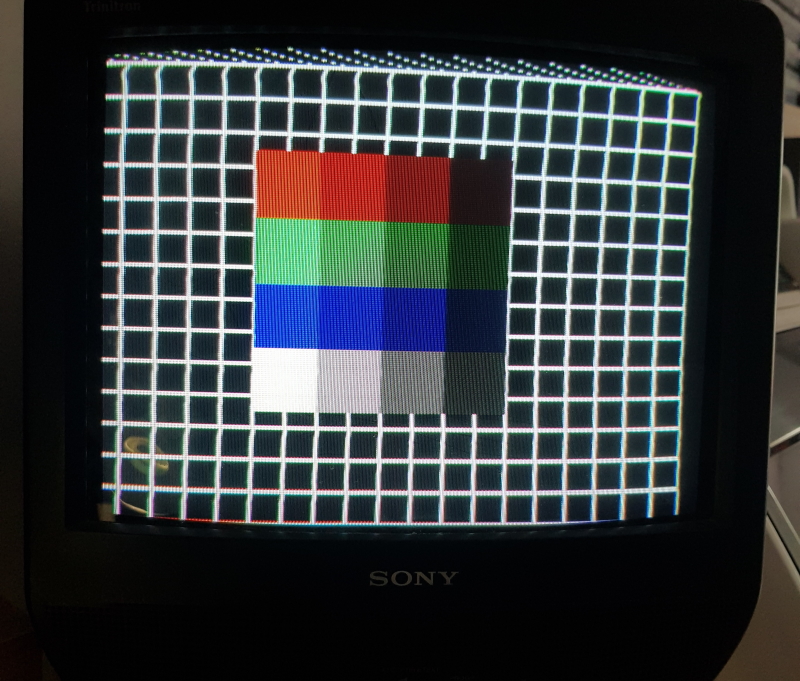 Now onto the sound board.
The good news is all the music was present and correct. The bad new was all the voice samples were not.

Again, using the schematics I see that ultimately the addressing for the Maskrom at IC21 gets set by a bunch of 4-bit counters at IC27-IC30.
Probing these I found that the UP counter wasn’t pulsing at all 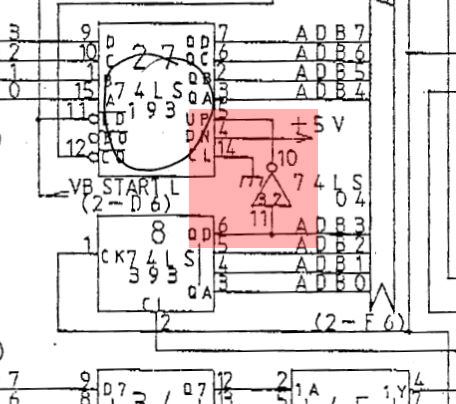 Checking the 74LS04 at IC32 revealed this inverter was bad so I replaced it and sound was restored but the sounds just carried on playing one after the other (never got a video of this).
The Z80 sets the start and stop data by writing values to address $C002 & $C003 respectively which gets latched by a couple of 74ALS574’s and fed into the B side of a 74LS688 comparator 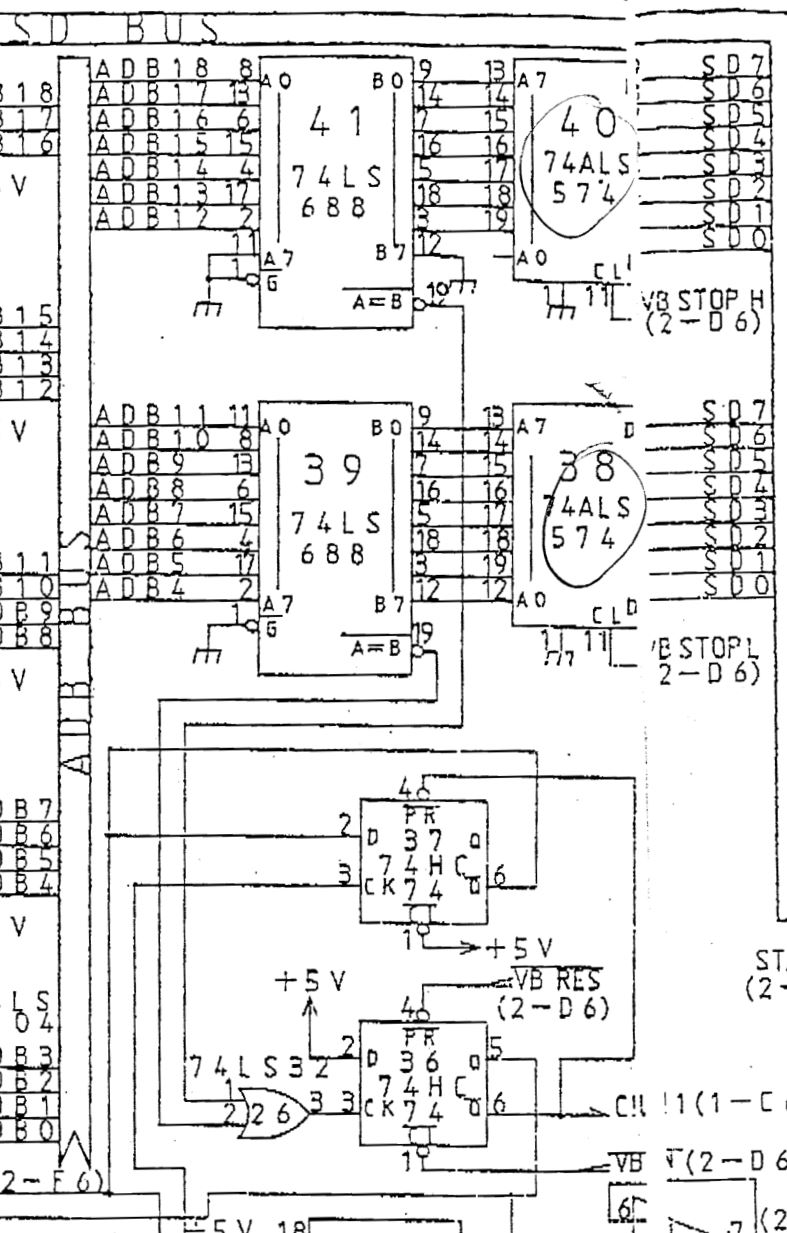 Using the MAME debugger I could see that the data being written to the 74LS574’s was correct but probing the /A=B output pin 19 of the comparators showed that these were either never matching or they weren’t working.
I couldnt find issues up stream of these so I desoldered them and replaced them with pulls from another board as I don’t have any spares. 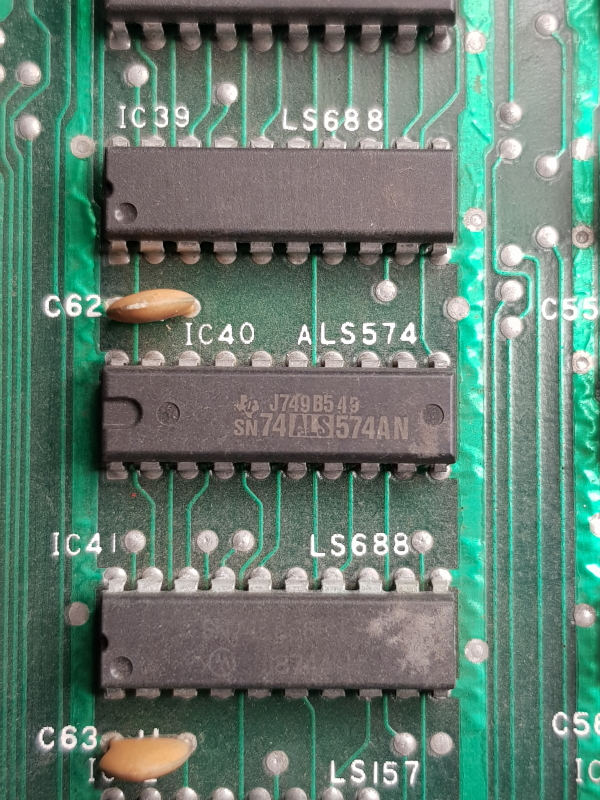 I now have working sounds and fully working board set ready to return.

I had this Fever SOS (international version of Dangun Feveron) PCB since many Years. Here is a picture of the board with the two chips I had to replace highlighted in red: 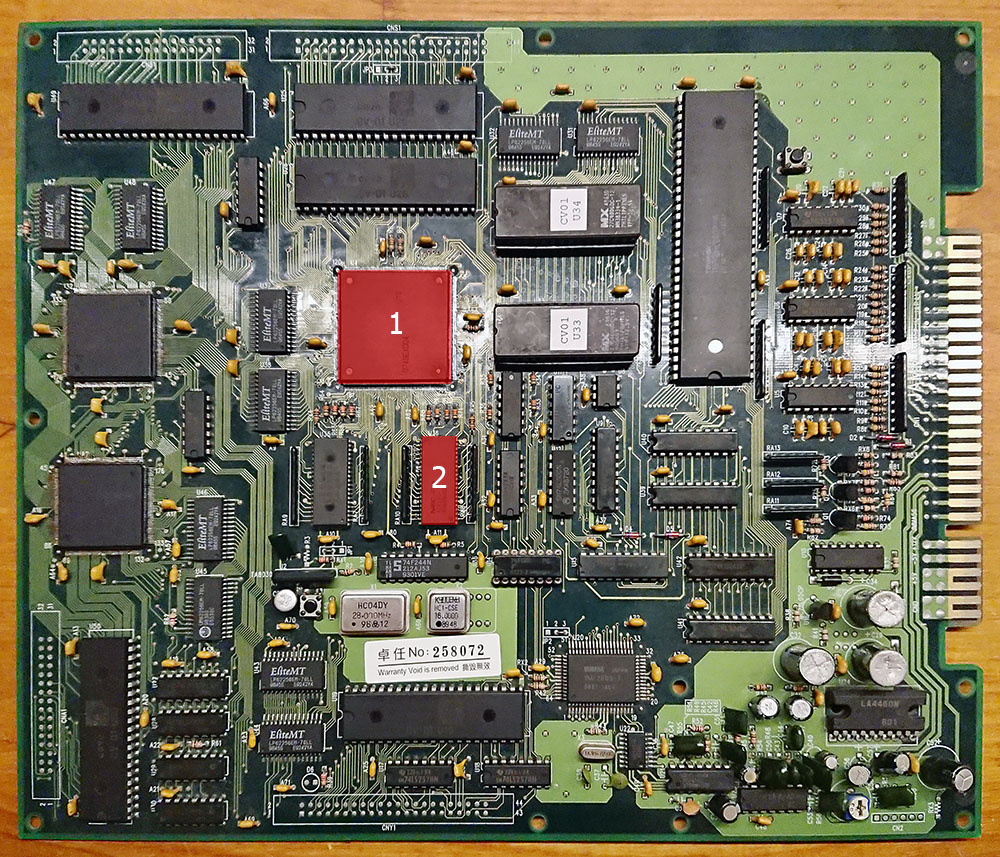 It had flickering sprites (the problem being pretty hard to photograph, I’m not able to show screenshots of it). In other terms, every second frame of sprites was not displaying.

1) The sprites are generated by a large 240pin custom chip labeled 9838EX002 – 013 on this board. Closer inspection revealed a cross marked on it by a previous repairer as well as a mark on pin #226. That pin goes to the RAS (Row Address Strobe) pin (#14) of a DRAM (424260) at U36, which is one of the two DRAMs that deals with sprites, each of them displaying alternatively one frame after the other. 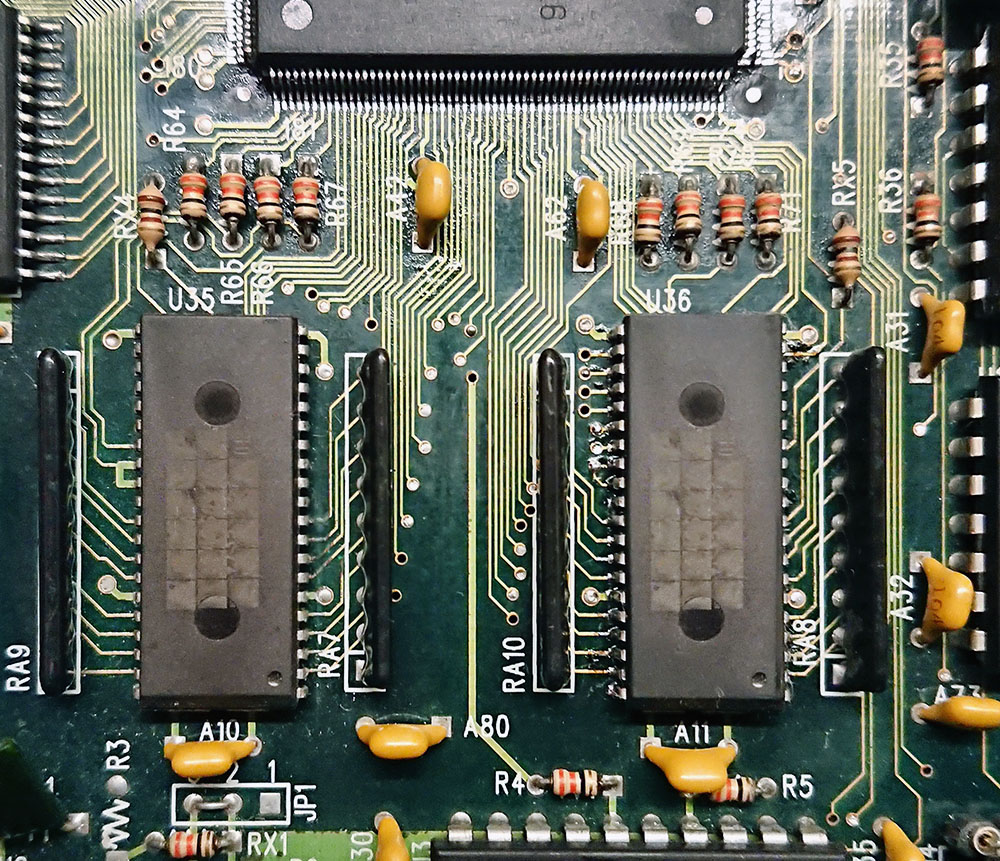 There was no signal at all on that pin (#14). Probing the equivalent pin on the adjacent DRAM at U35 showed a pulsing signal. RAS being a signal going towards the DRAM meant that the large custom chip wasn’t giving the signal needed at pin #226.

I needed to change that large custom chip. These being on Cave 68000 systems, they are unfortunately available mainly on rare and expensive games (list available in the Cave 68000 MAME driver). After a long time, I finally had the opportunity to grab a UO Poko board which has the same chip, even labeled not exactly similar: 9749EX004 – 013.

Left is the faulty chip taken off the Fever SOS board. Right is a working chip taken off a UO Poko board. Notice how the left one blistered after heating it for desoldering, while the right one didn’t change.

2) Unfortunately, swapping the chip did not resolved my sprite flickering issue but at least the signal at pin #226 was then looking good. Probing the linked DRAM at U36 showed some weird looking signals on a few I/O pins (#2, 3, 4 & 5 pins).

I swapped it with a functioning DRAM (a NEC 424260). That finally resolved the flickering sprites problem. 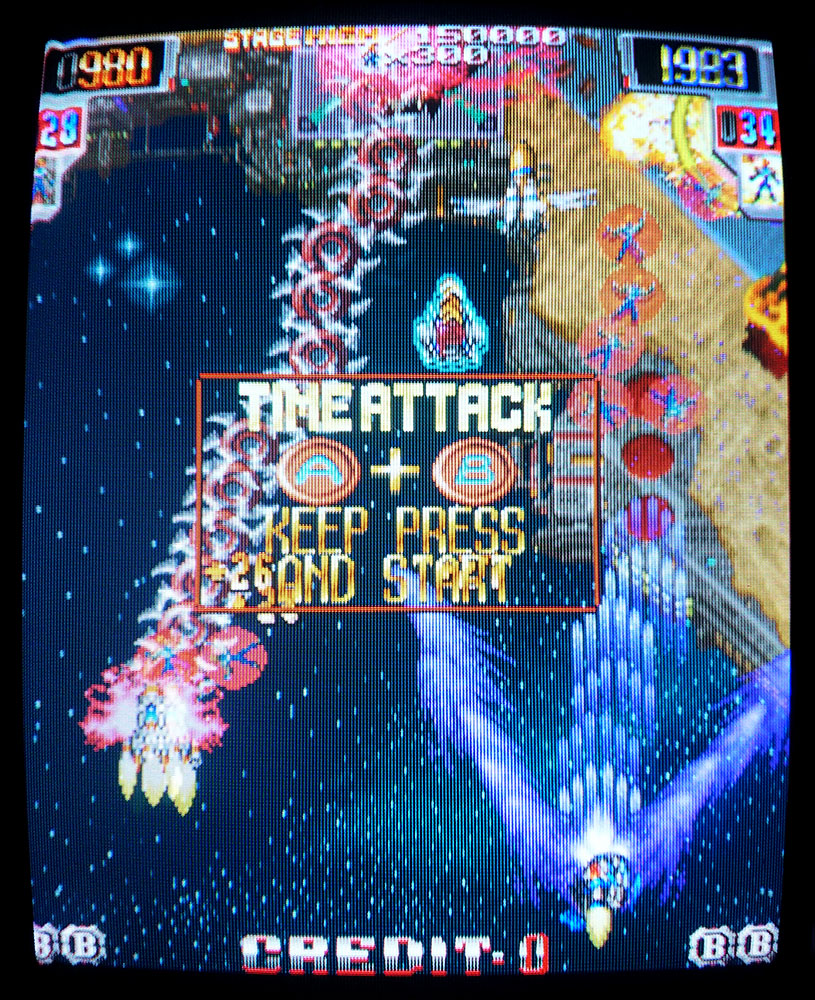 I’ve been meaning to update this page for awhile but work and life has got the better of me.

If your Track&Field/Hyper Olympic has the following layout then you have unencrypted roms and you will need this updated version of my diagnostic to run on this particular board.  Note that this version will not run on boards equipped with a K1 cpu ( 42 pin custom IC ) or a game ( usually a bootleg ) with daughterboard that has a 6809 processor onboard, the daughterboard version also has some extra logic associated with it to decrypt/unscramble the opcodes. 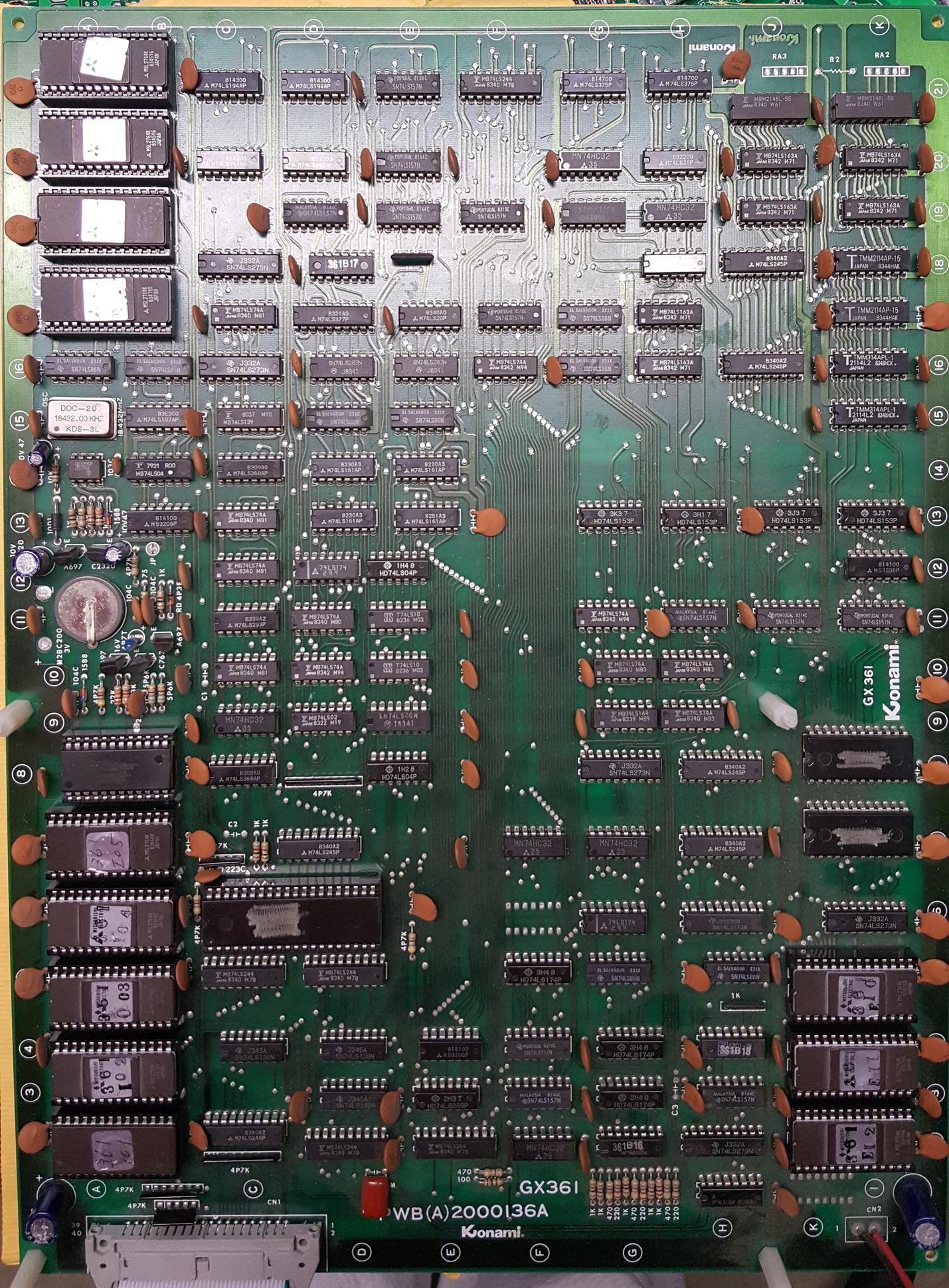 Note: The board does not have a K1 CPU but uses a standard 6809 processor to run the game. Decryption related circuitry is also absent from this version. 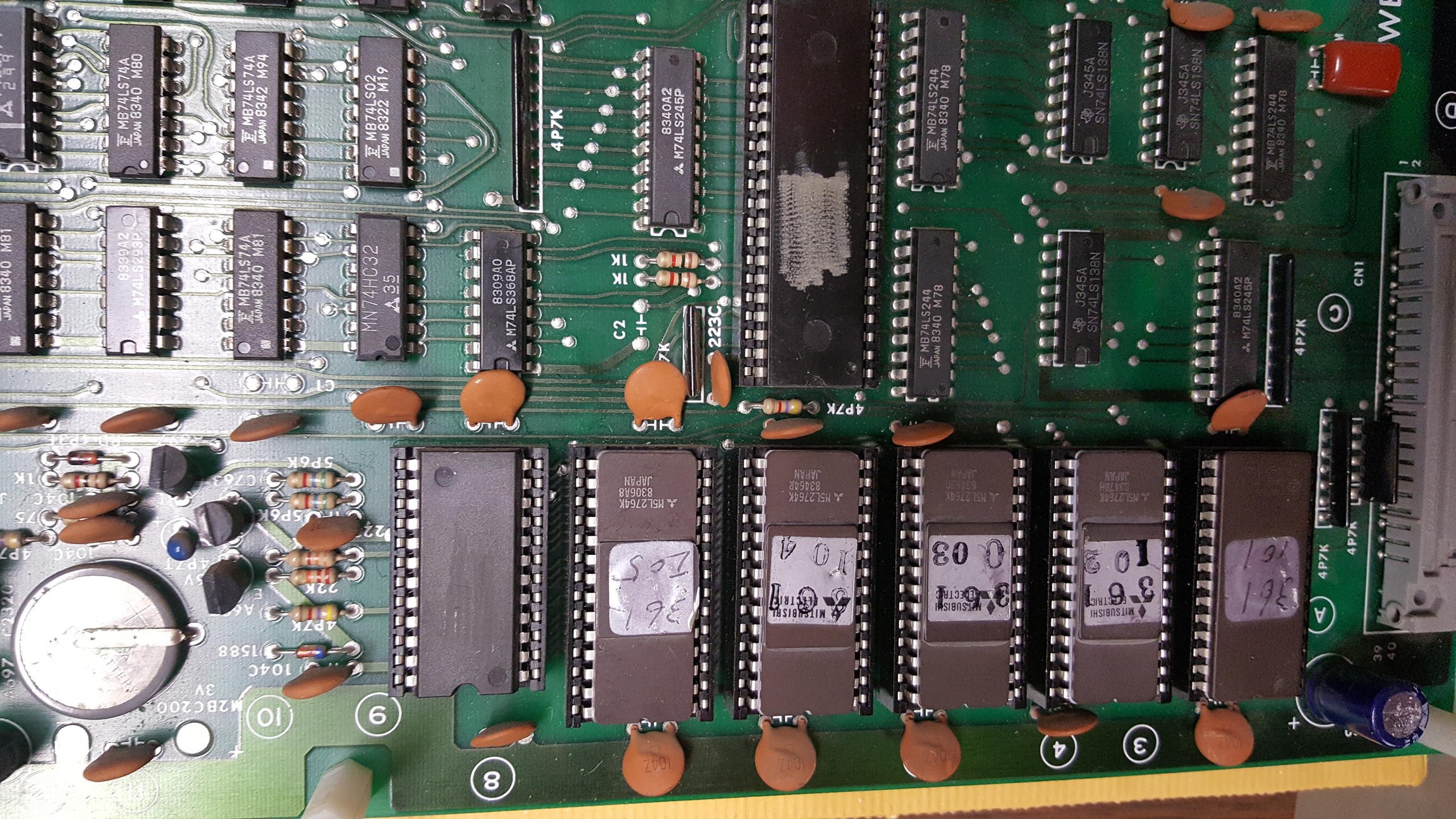 I have prepared a version that will run on this board. 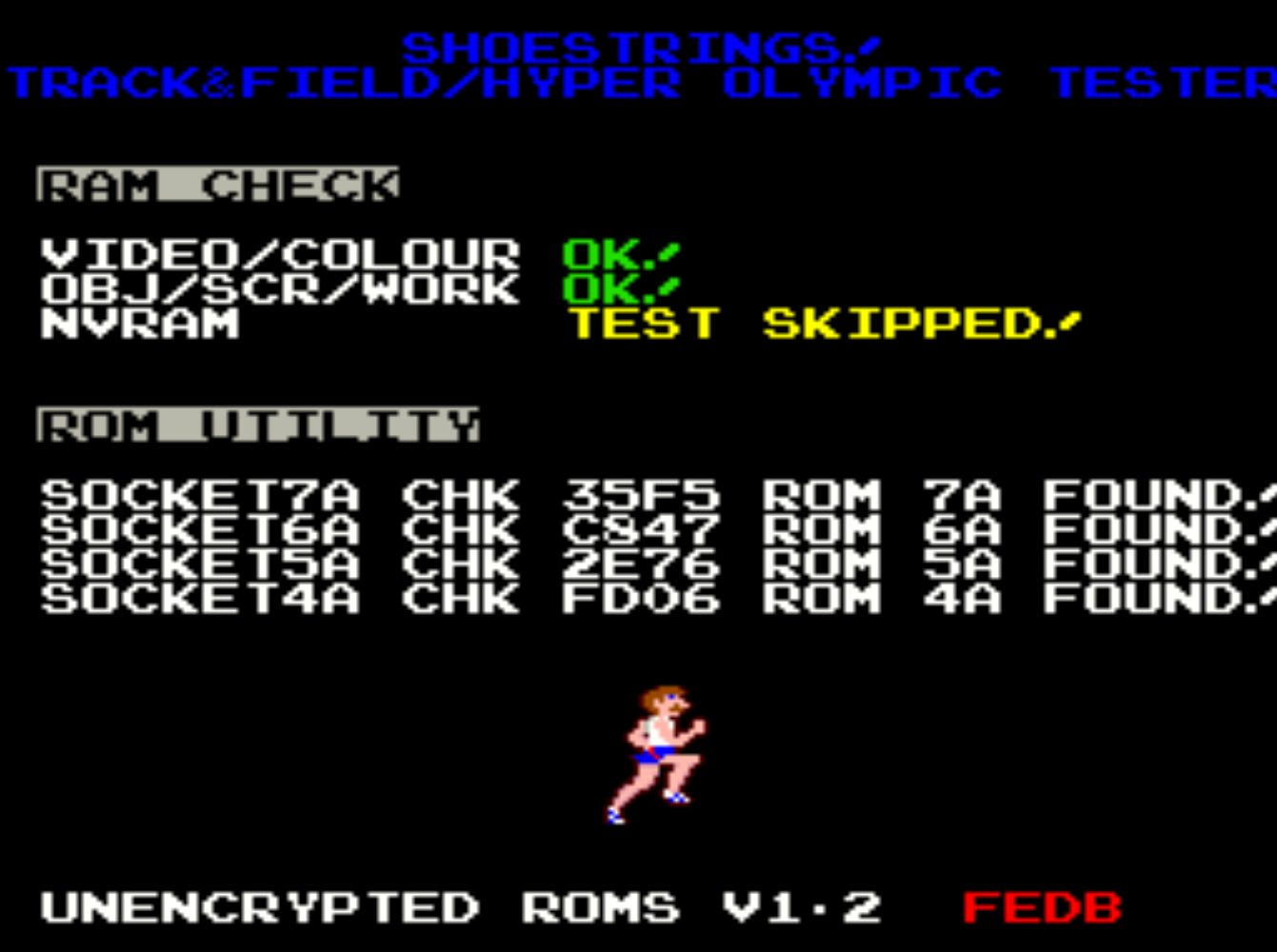 TEST 1.2 is now the current version which installs in socket 5A on Konami and Centuri versions. 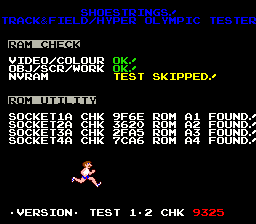 This is a test release.  A BETA version will replace it and this post will be updated pending sufficient feedback. It has been reported by one tester that this version works on real hardware but more feedback is desired.

IMPORTANT: The diagnostic EPROM now installs @ 5A on the Centuri and Konami boards. For the Hyper Olympic bootleg install the EPROM @ A7 and for the NZ bootleg install @ 2A.

This frees up 4 sockets for verifying game EPROMs instead of only 3. Since 5A is mapped to 0xe000-0xffff and the reset vector is obtained at 0xfffe/0xffff, it made sense to move the test rom to this socket. 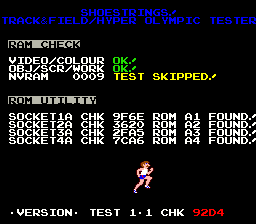 IMPORTANT: All versions below install in socket 1A

TODO: Future versions will install in socket 5a. The main reason for this change is to ensure the test rom boots since the 6809 obtains the reset vector from EPROM A5 ( 0xfffe ), there is a chance that the reset vector could be corrupted if the game EPROM A5 is bad. Moving the code to run from socket 5a will prevent such an event and also make the first 4 sockets available for verifying an A5 EPROM or any others.

Special thanks goes out to Purity on UKVAC for his help with testing and feedback.

If you believe there are missing sounds please report them in the comments. 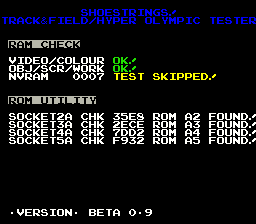 See below for correct 16 bit checksums matching your set.

This EPROM installs on the CPU board @ 1A. This does not replace the original software in 1A but is only used as a means of testing the main-board, sound and video.

In the normal mode ( power up tests ), nvram tests may be skipped to preserve high score data if so desired. This is done via DIP 8 of SW2. A ~10 second countdown is also included even if you desire to test your nvram, in this mode nvram tests may also be skipped by pressing the “player 1 button 1”.

Important: A5 ROM needs to remain in socket 5A, this is because the 6809 obtains its reset vectors from this ROM. If the test rom or game fails to start and the screen is full of zeros, verify the A5 rom manually.

Note: That this is a very BETA release and is currently in the testing phase, bugs are expected. Use at your own risk if you love those high scores. 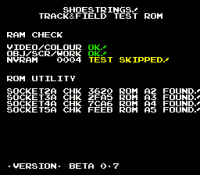 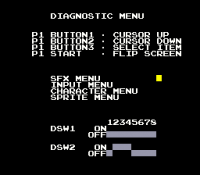 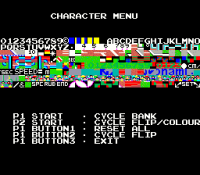 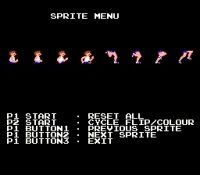 A few updates.
*Small bug fix when loading larger files so they now load.
*Removed a couple of the more obscure routines as I wasn’t happy with them.
*Now, if the loaded file is an uneven size it will offer to pad the file for you. Minimum size for this is 0x400.
*Fixed a bug with bit manipulation when saving/loading settings

Updated BINman to support IPS patching (v4.6.0).
Recently needed to patch a file so though i best add it. Its not thoroughly tested but im sure bugs will be discovered in time and i will fix it.