This is my own implementation of the Konami ‘082’ custom IC with the use of simple logic gates.Original part is a 28 pin 600mil IC found on many PCBs of 80’s.As often happens with most of Konami custom ICs it comes with scratched-off part name: 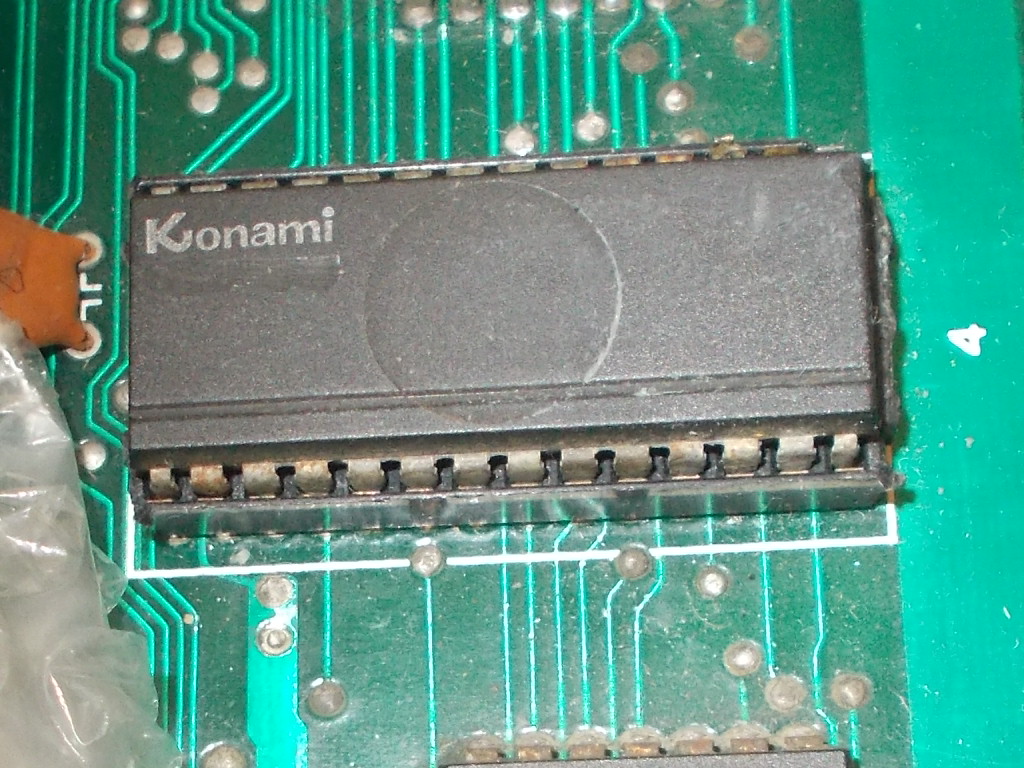 I was able to shrink my board layout to almost same dimensions of original part by using TSSOP devices : 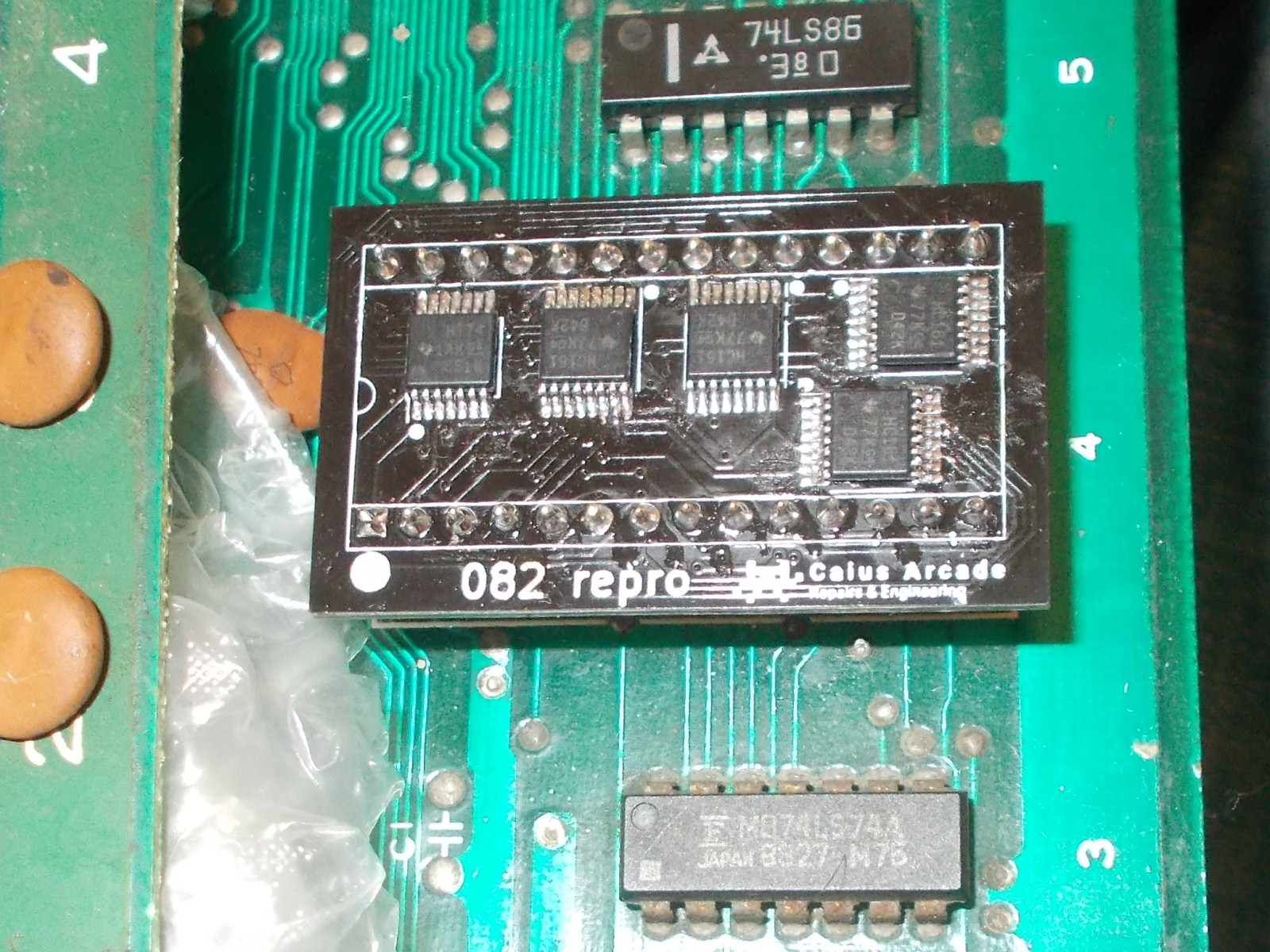 Perhaps not the neatest design, you may call it a ‘poor man’s’ version of the existing CPLD based solution but it works fine and I’m happy with it.Here’s final testing on a Track & Field PCB : 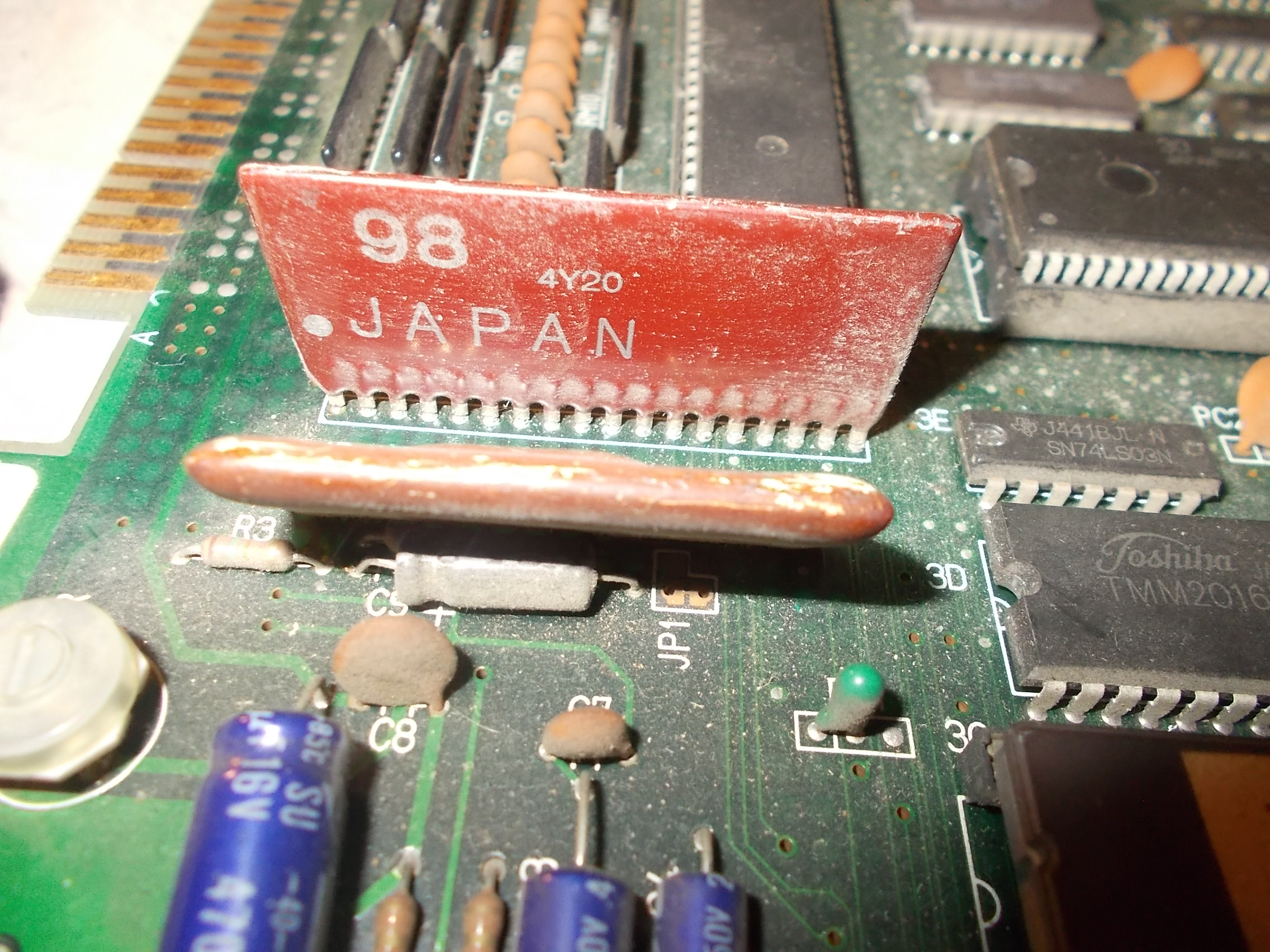 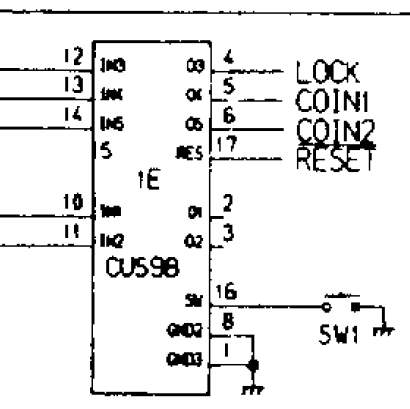 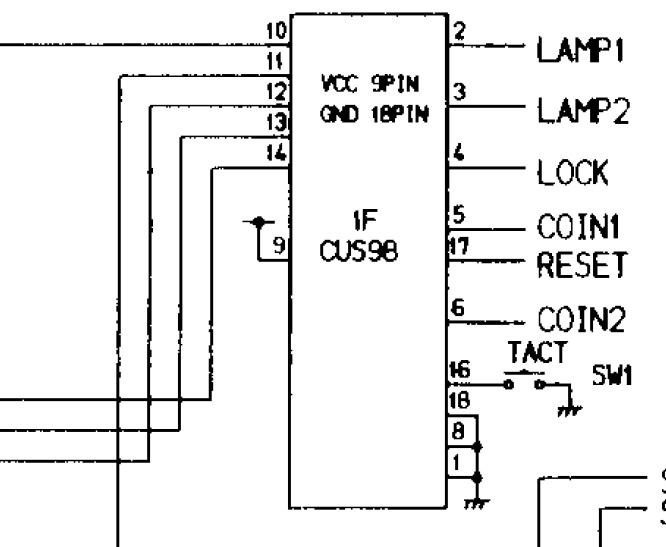 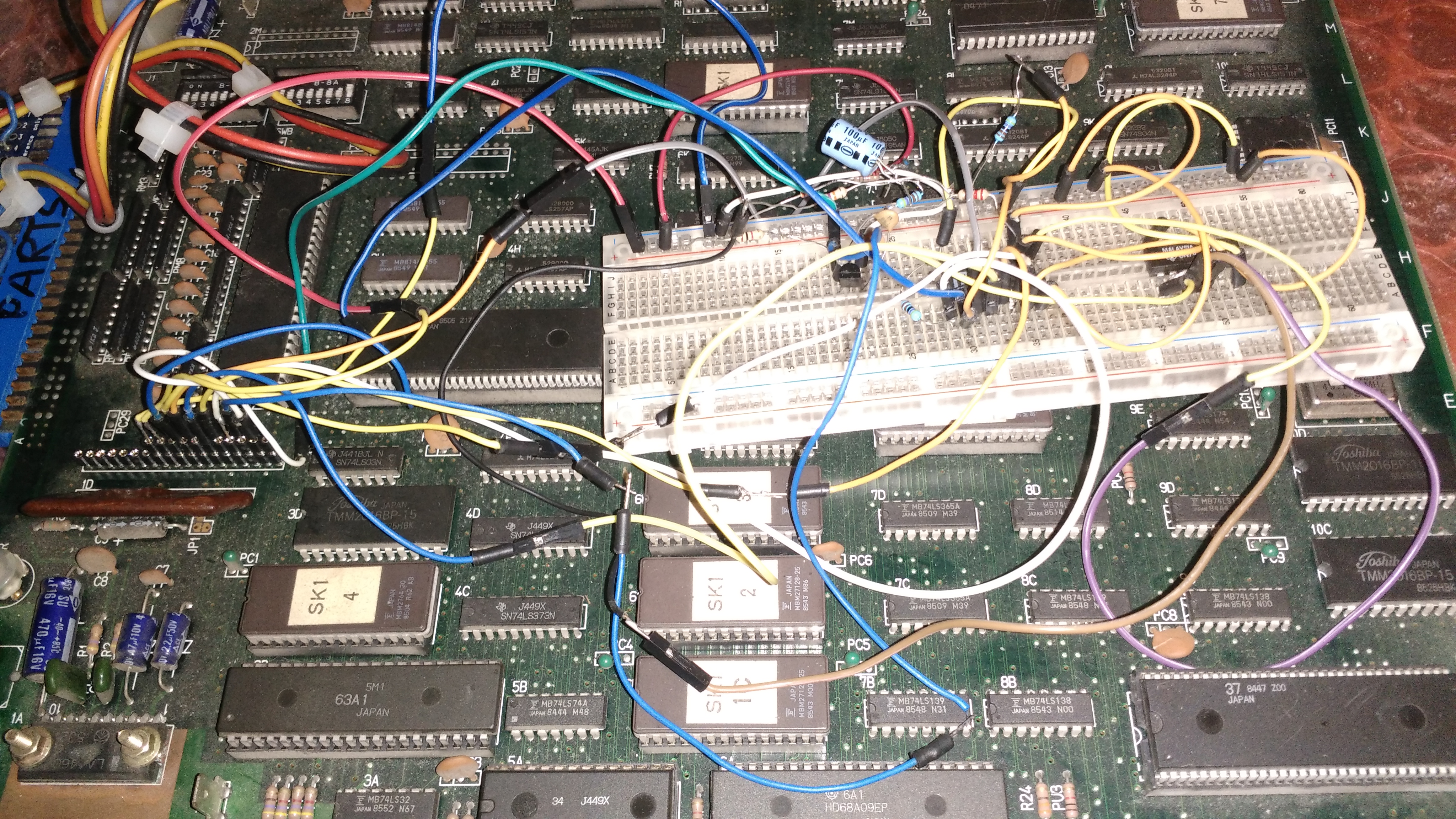 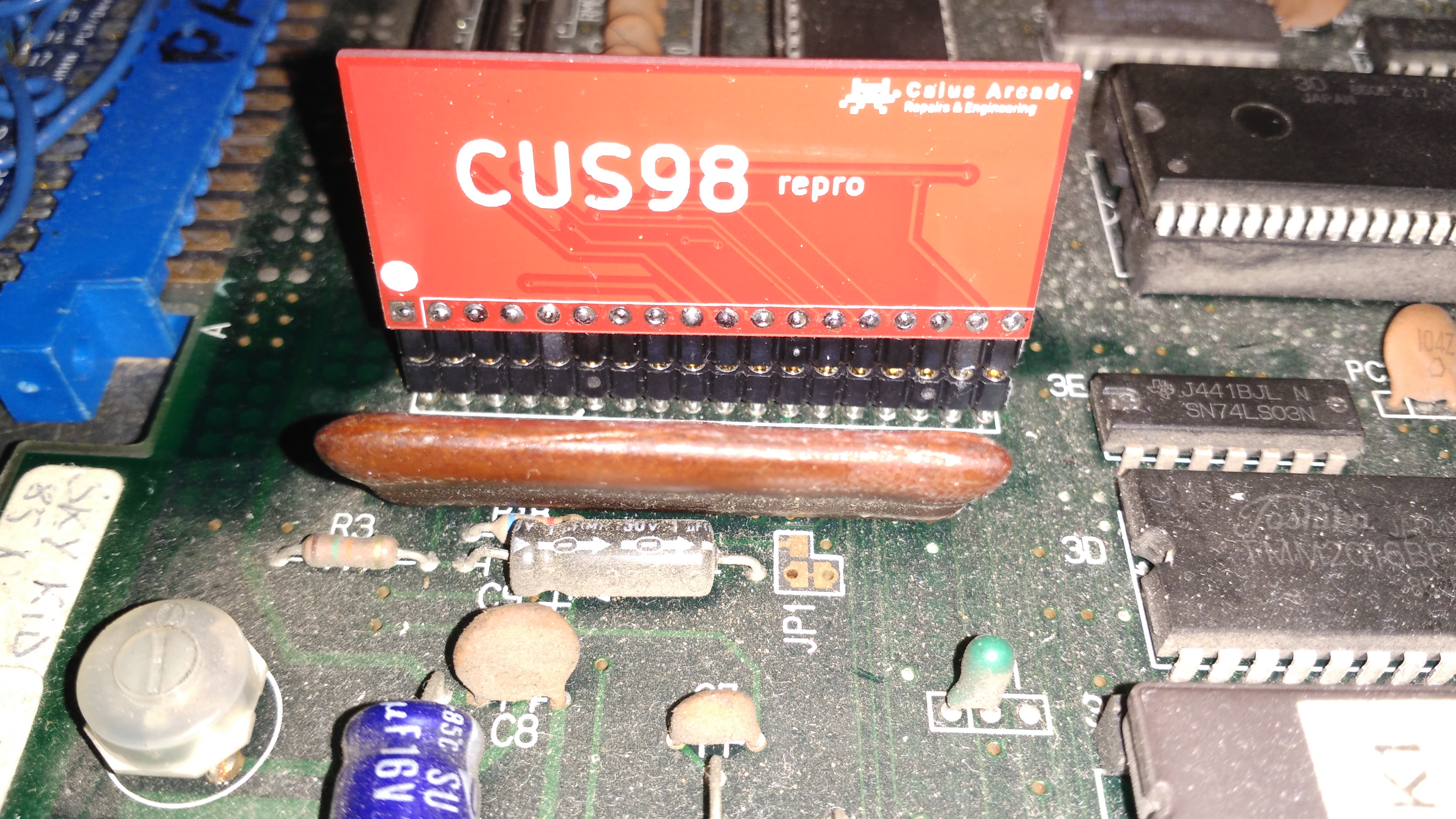 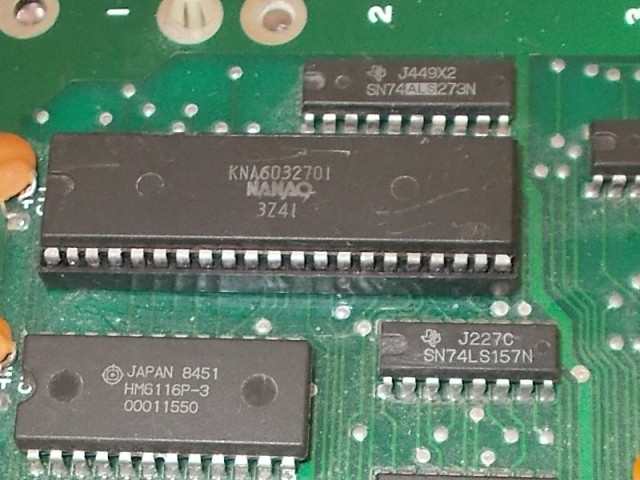 As usual I reproduced it my way by observing how it was reverse-engineered on bootleg boards obtaining in a board layout with pretty same dimensions of original part : 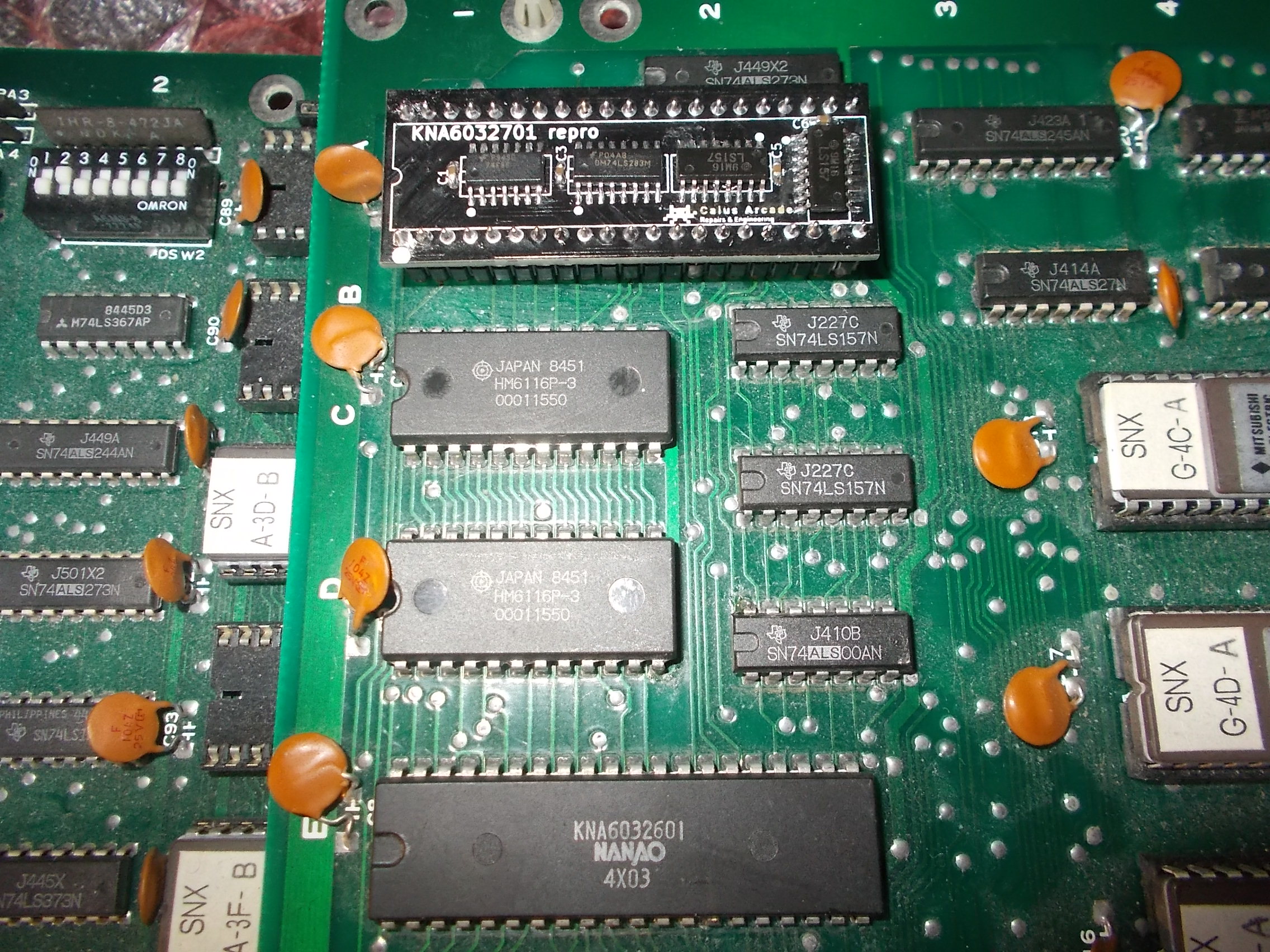 Testing on a Kung-Fu Master PCB :

This is another ‘poor man’s’ custom IC reproduction I made with no use of CPLD or other complex programmable logics.The part reproduced is the Konami ‘083’, a 28 pin 600mil in DIP package which most of times comes with scratched-off part name : 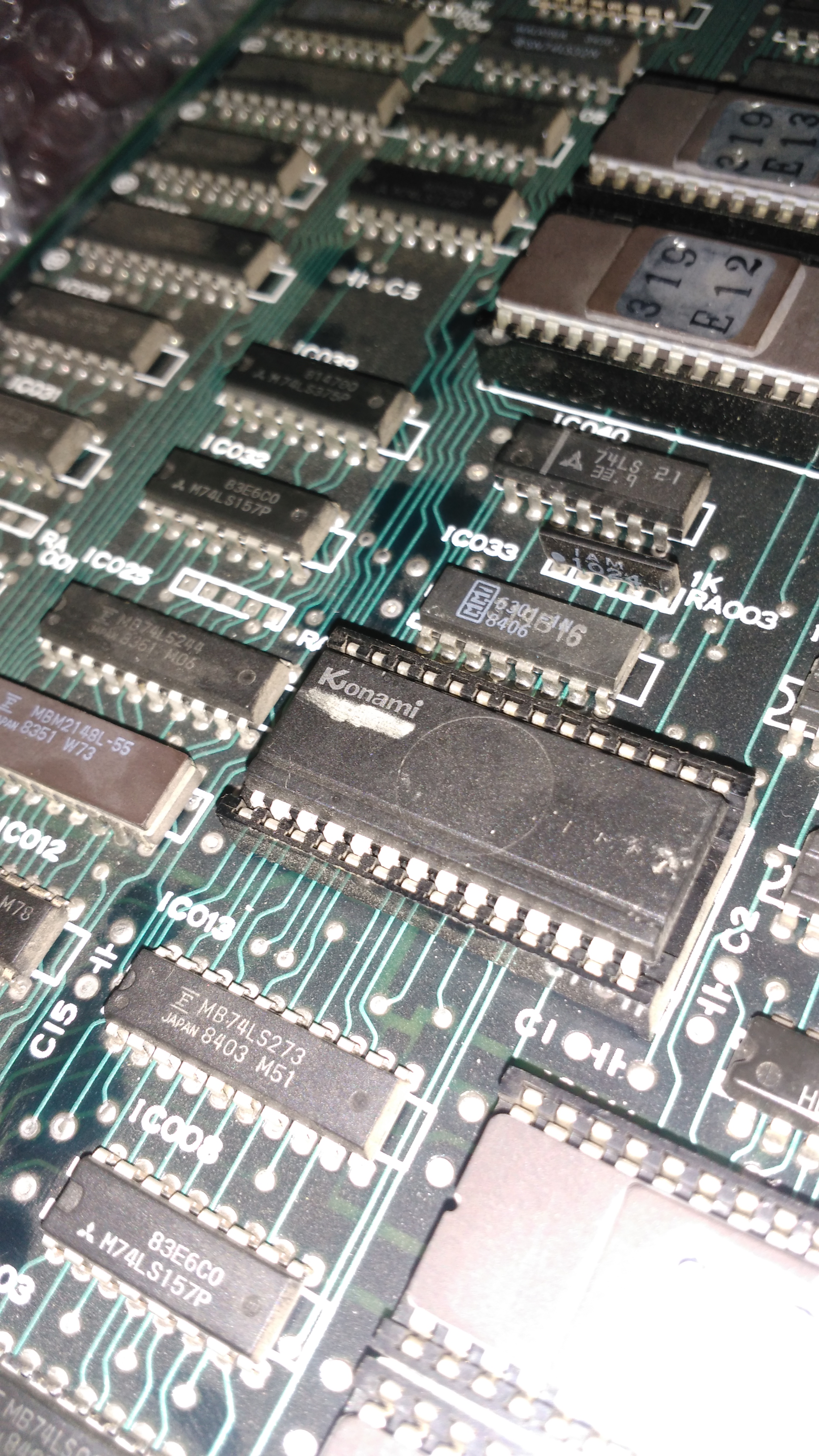 It can be found on several Konami PCBs, you can refer to this useful spreadsheet (credits to ‘mattosborn’ on KLOV forums)

As always I observed how its functions were reverse-engineered on bootleg boards and made my own reproduction with simple TTL gates logics : 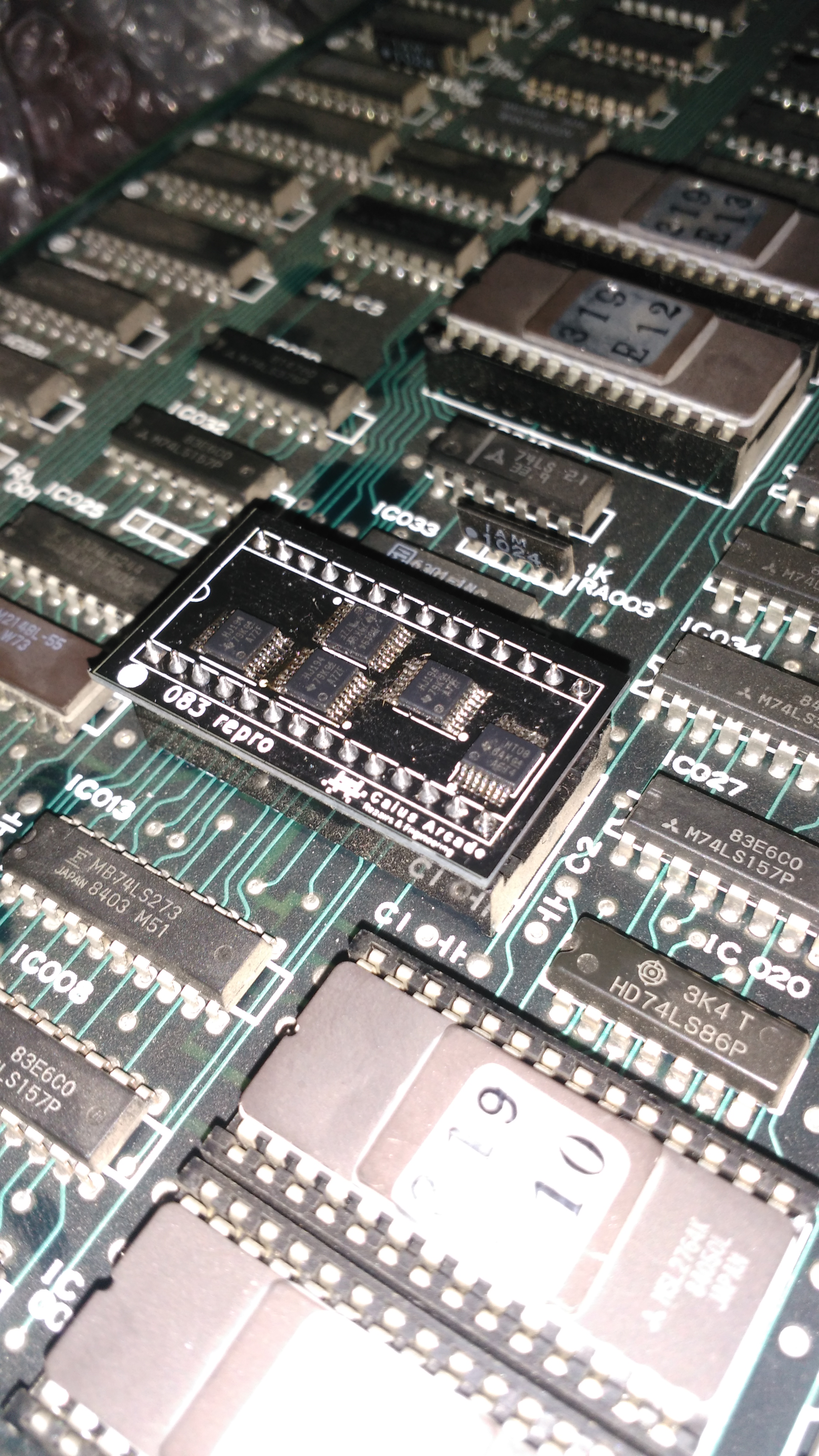 The ‘CUS99′ (simply silkscreened ’99’) is a custom IC used on Namco arcade PCBs.It’s a 16 pin SIL component covered with a brownish coating : 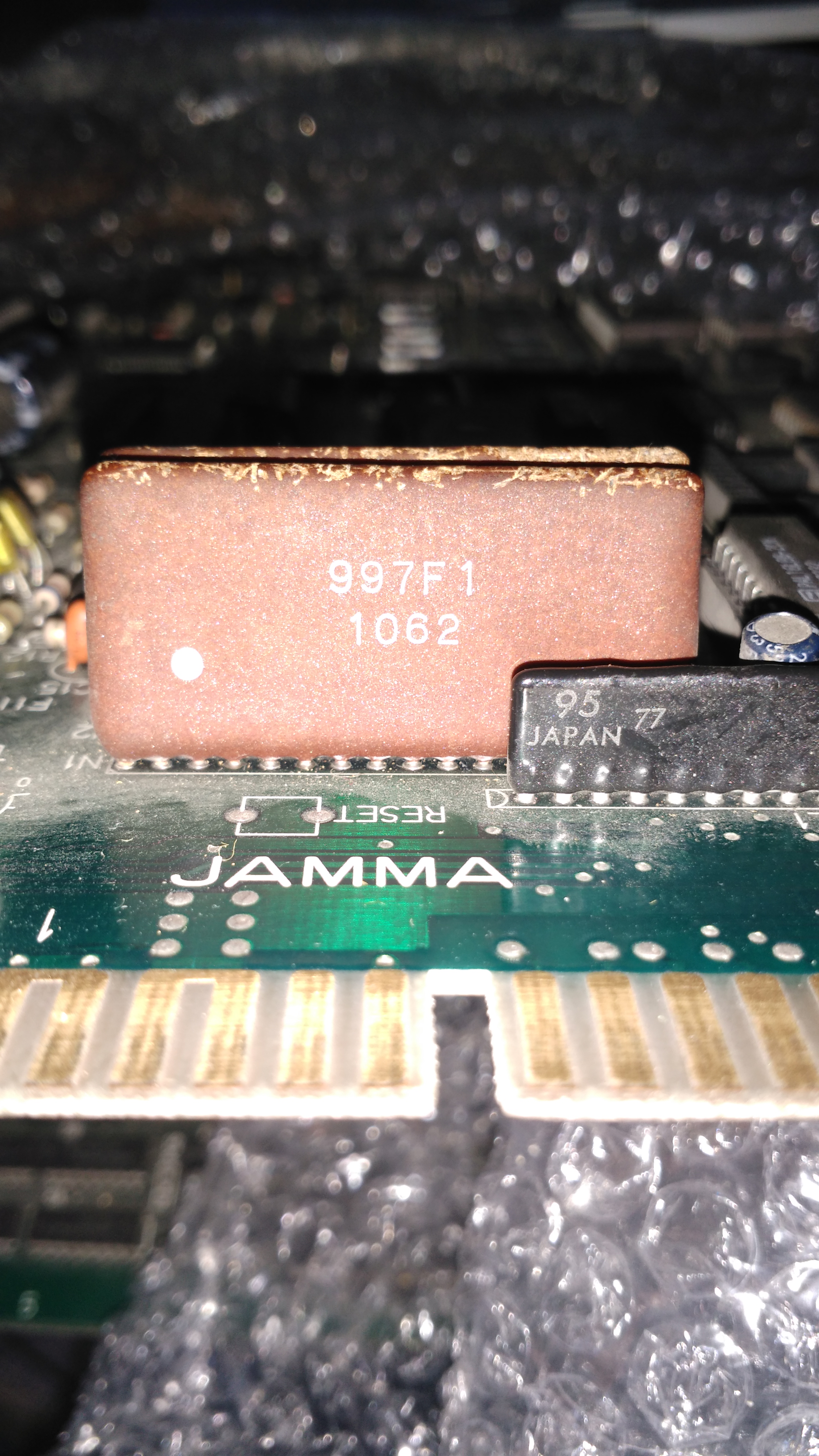 It can be found on pre-System86 (Pac-land, Sky Kid, Gaplus, Dragon Buster and other boards..), System86 (Rolling Thunder and other games on same PCB layout) and System 1 hardware.From the scarce info about it the ‘CUS99’ is involved in sound volume control but we knew nothing more detailed about, pinout from official schematics apart : 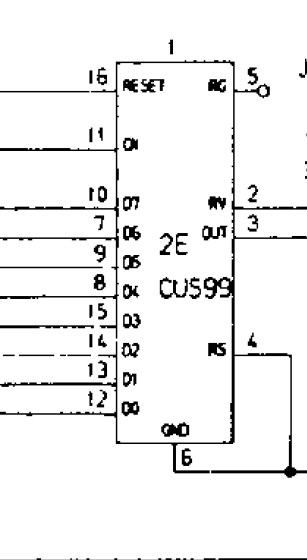 Recently I’ve been sent by the user ‘JorgePT’ a pile of System 1 boards for repair hence, with his permission, I analyzed the part. After drawing schematics of its internal structure I came to the conclusion that the ‘CUS99’ is nothing more than a 4-bit DAC with output level control performed by analog switches.Its design was quite simple and easy to reproduce with few parts  : 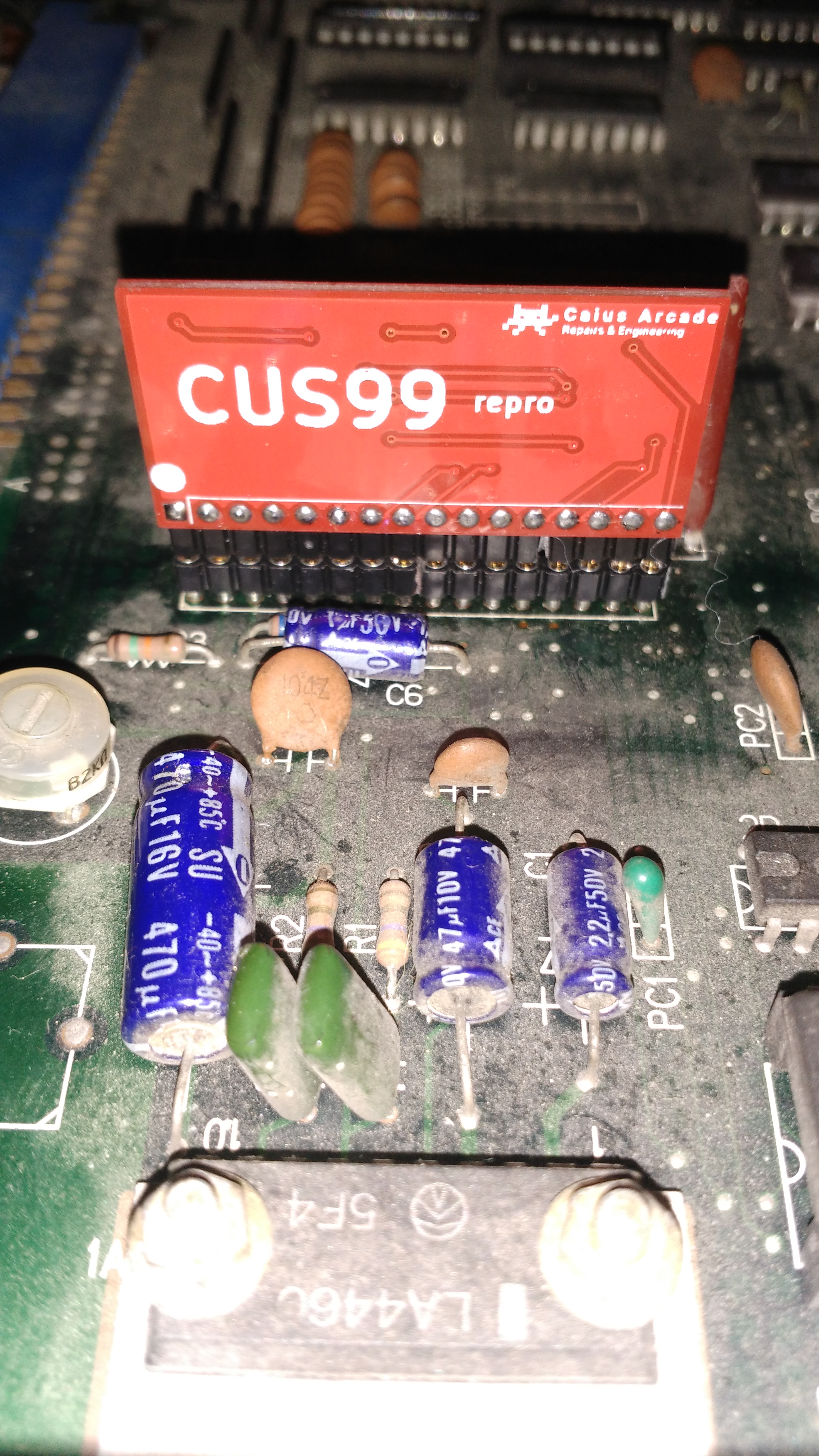 Testing of the repro on a Pac-Land PCB was successful:

Thanks again to ‘JorgePT’ for his willingness.