Where to start with this one.
My good friend brought this round a while ago with the fault of jailbars down the screen and no sound.
After messing around a bit we couldnt even get the game to boot on my setup no matter what we tried. He left it with me and ive been chipping away at it for a month or two now whenever I get time.
Ive finally got this thing up and running.
First this I found was two PLD’s, TJ-0 and TJ-1, were getting really hot.
As I have a couple of spare Caveman Ninja boards I did a swap and the game booted. Strange thing though, those PLD’s actually work in my other semi working board.
So now we have this 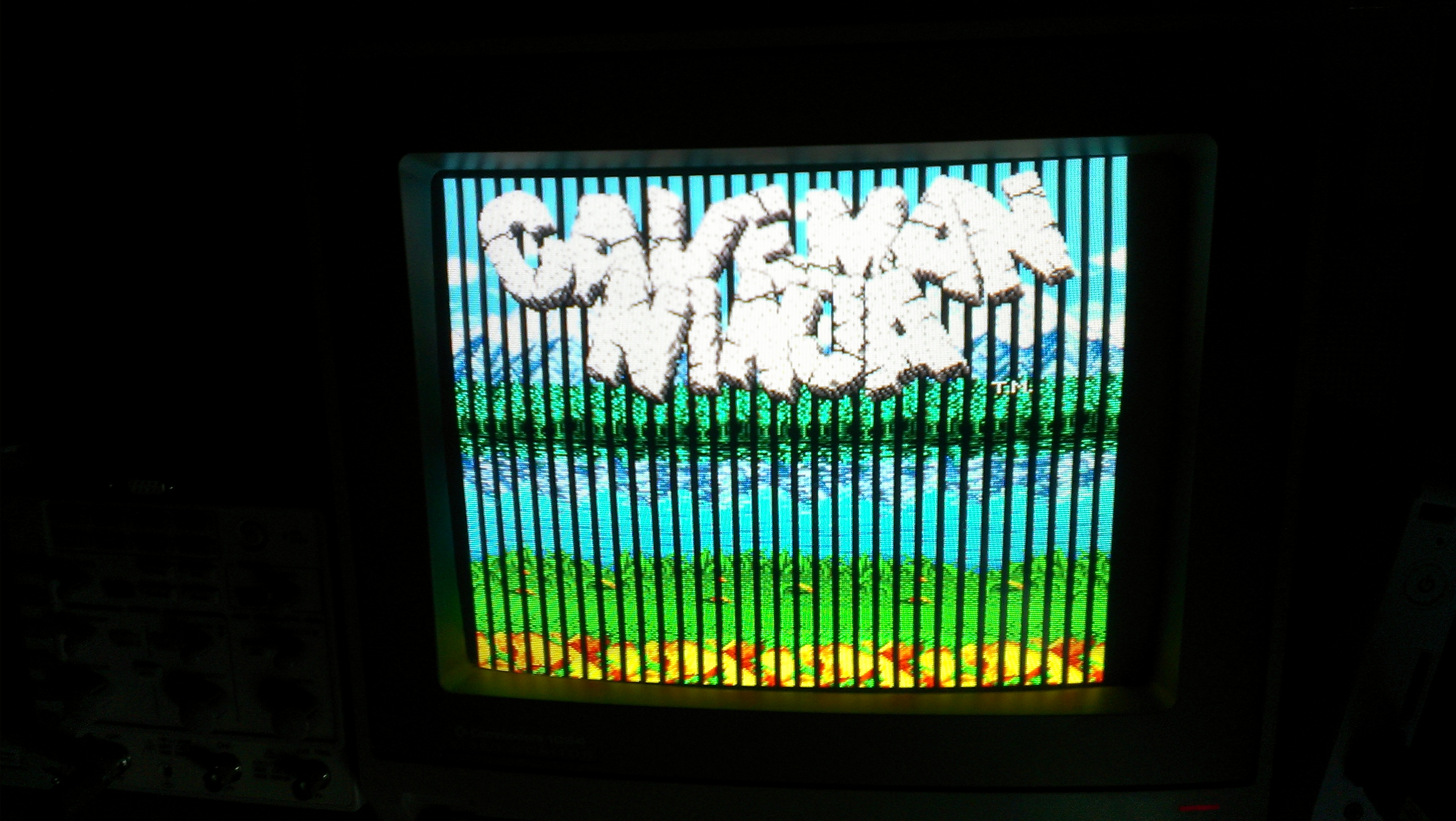 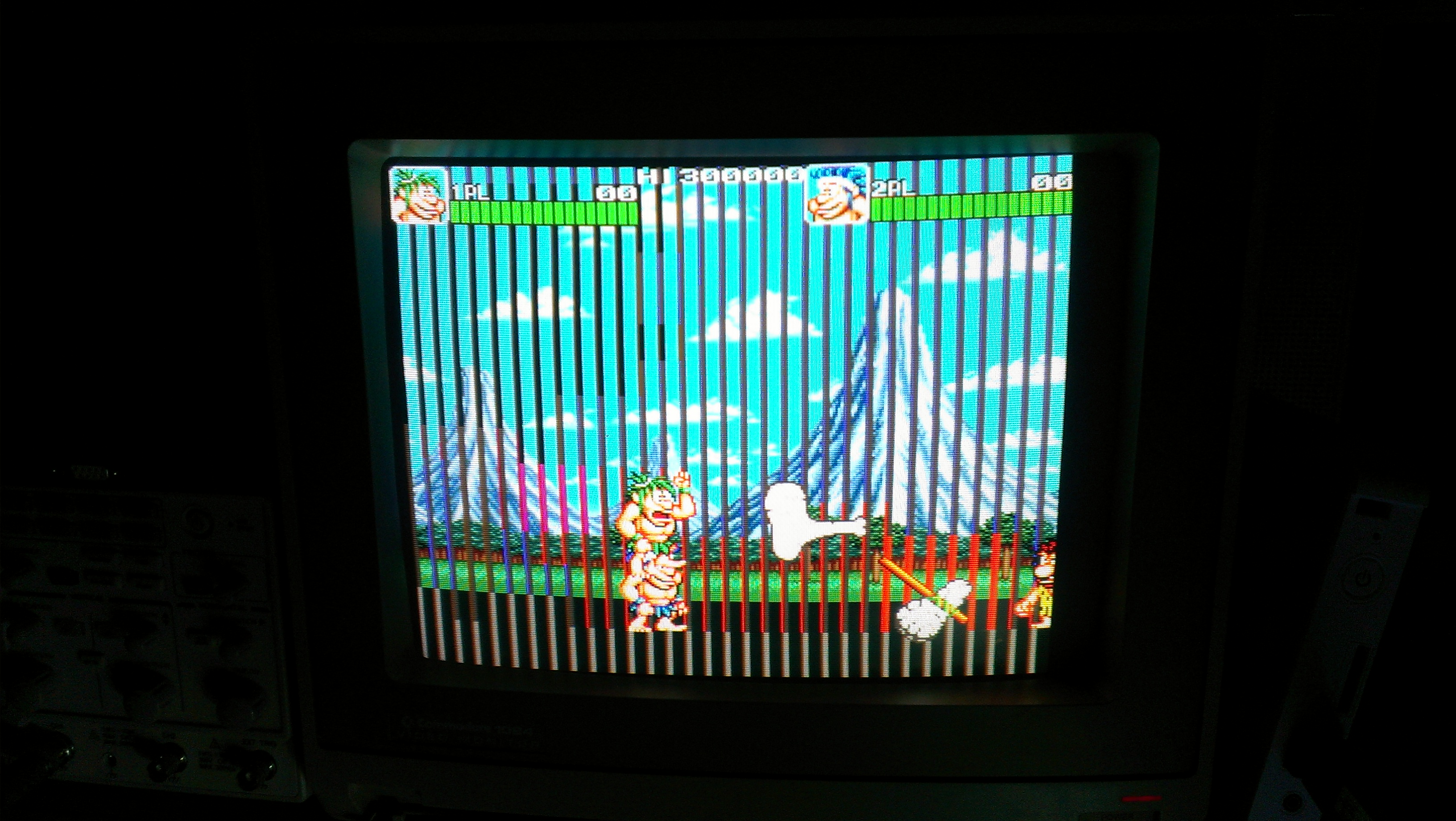 and no sound was present either.
Jailbars are usually a sign of a failed ROM so off the the tile ROM’s I go.
Found MASKROM MAG-02 had a few floating data pins. Replaced this for one off my scrap board and we get this 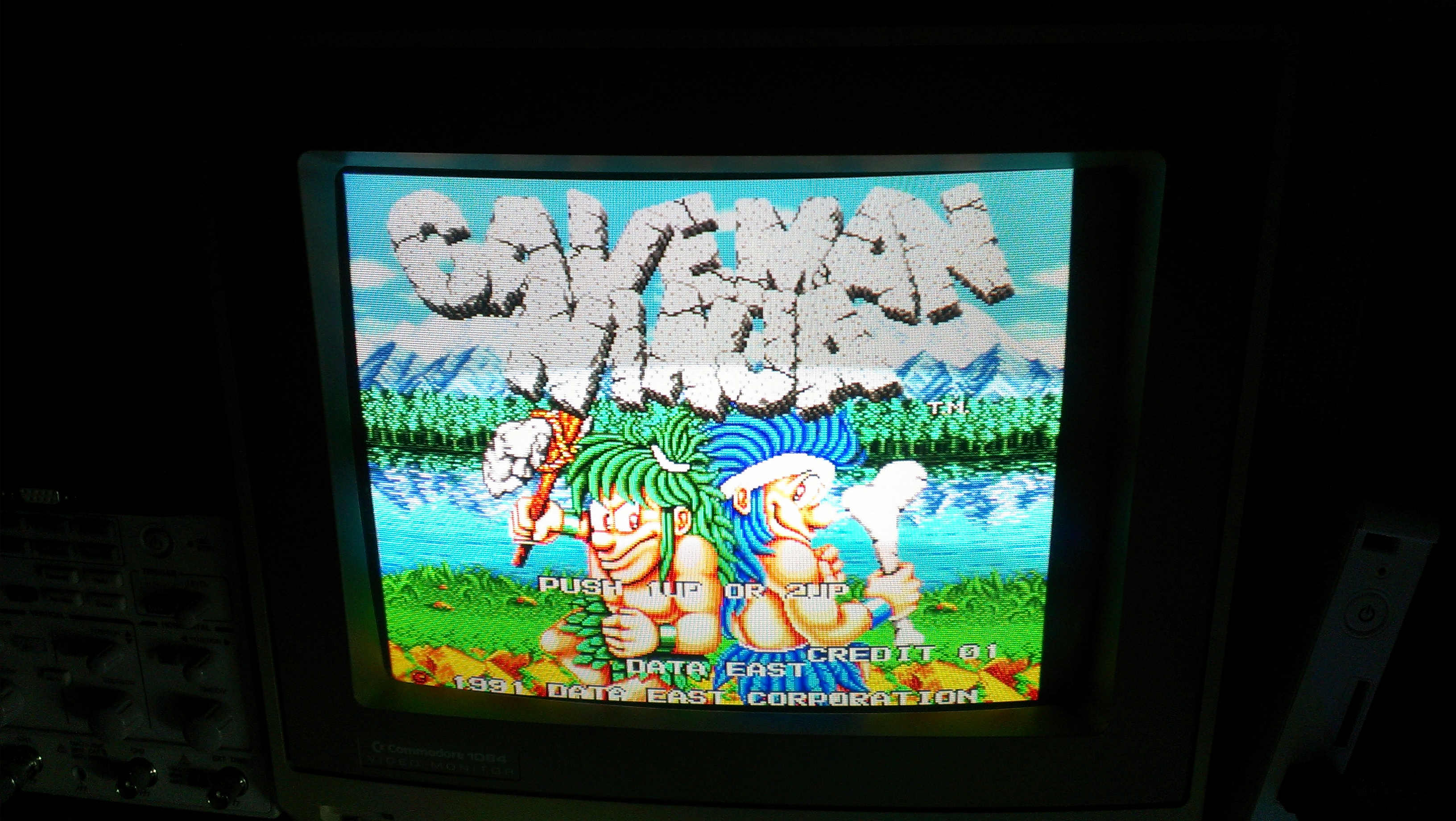 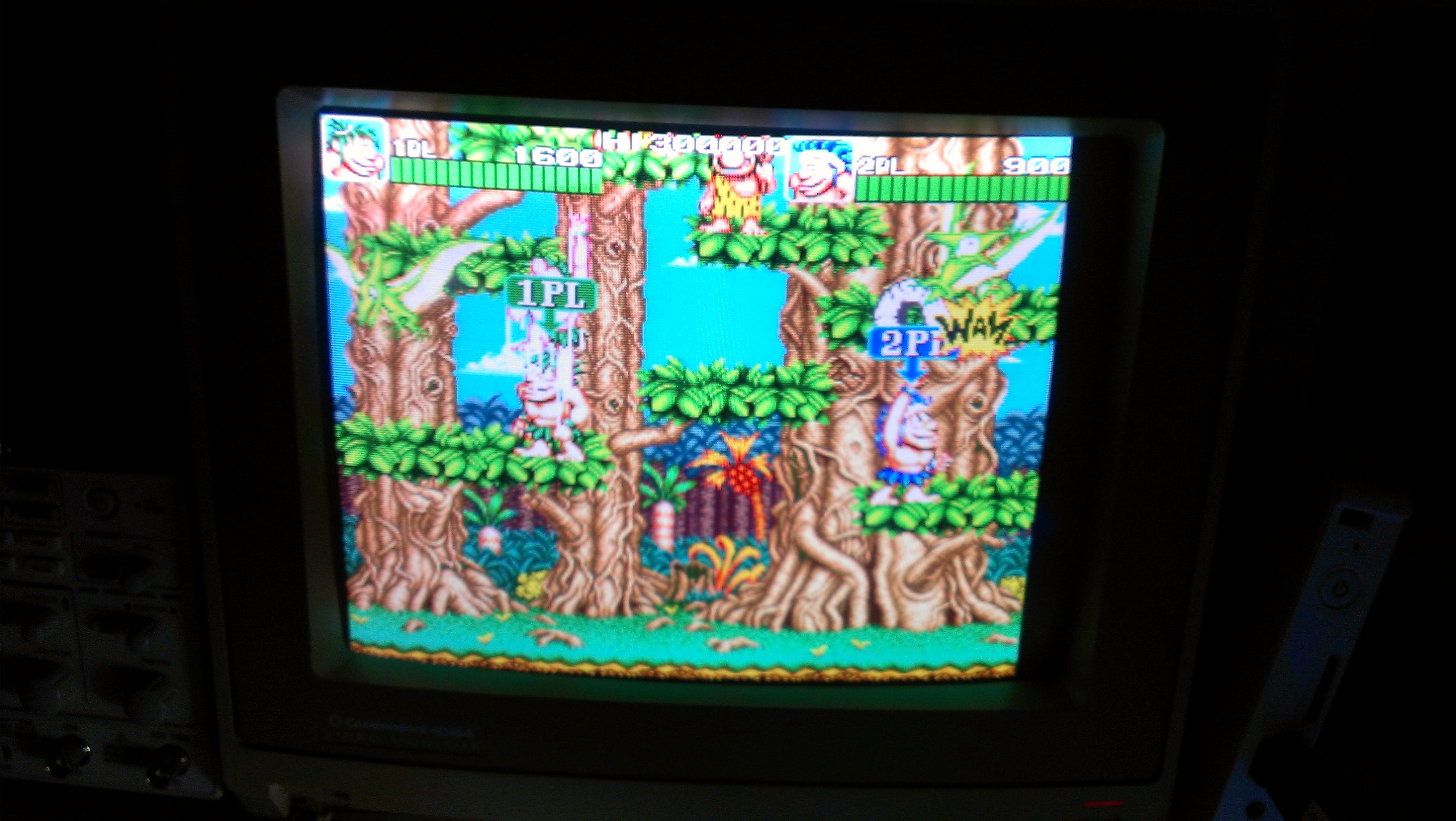 Graphics are back. Now onto the sound.
Looking first at the two OKI M6295 chips I could see neither of these were being enabled. If I pulsed the enable lines I could get various sounds to play. This tested the rest of the sound circuit so I knew it was good.
I traced the enable lines back to a 74LS138 decoder which wasn’t doing a great deal despite having what looked like good inputs. I removed this and it was indeed dead so replaced with a new one. 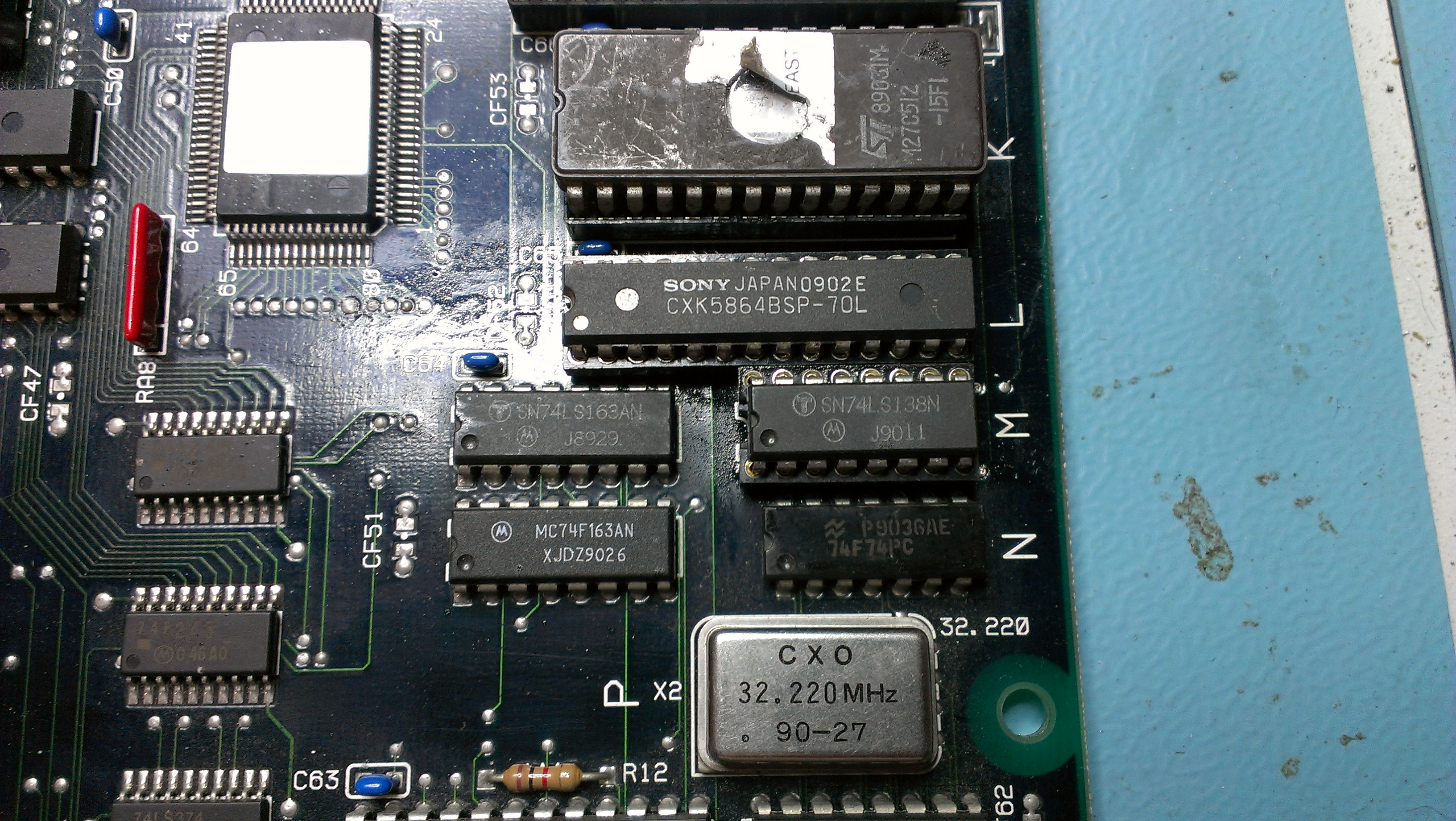 Still no sound though.
I could see the sound CPU and ROM were being addressed properly so next up was the RAM. On this board it was a TMM2063 chip. I could see activity on the data lines but it was struggling to drive them up to logic HIGH so removed that and that too failed a test. 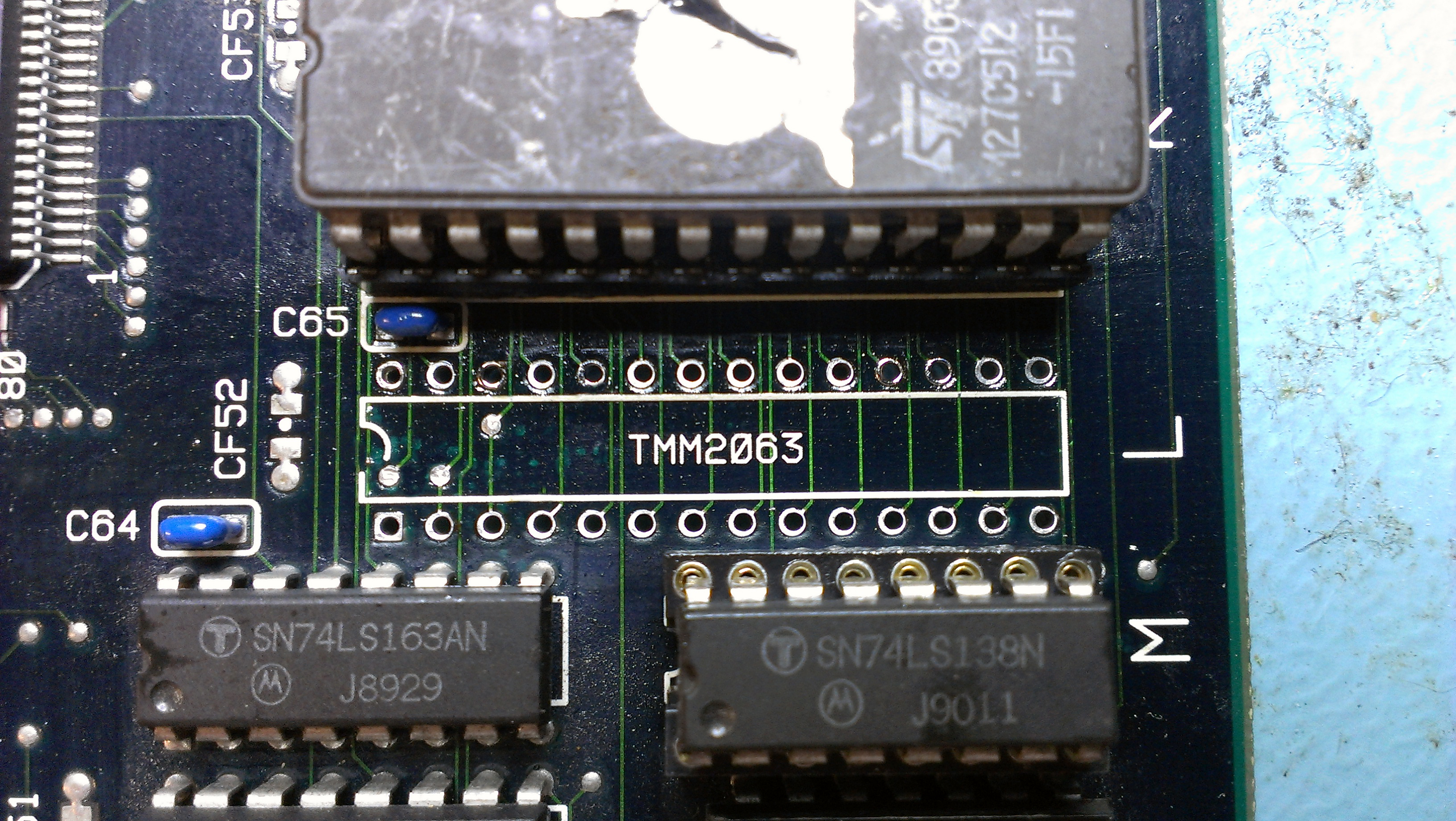 I replaced it with a CXK5864 chip. Still no sound.

I started looking into how the sound section worked and found that the custom 104 protection chip is responsible for activating the sound.
I got in touch with a guy called Bryan who wrote the MAME driver and he gave me some nice information of its operation and basically pin pointed my issue to this chip.
At first I tried reflowing the pins but it made no difference so after a bit of debate with myself I took the plunge and removed the chip 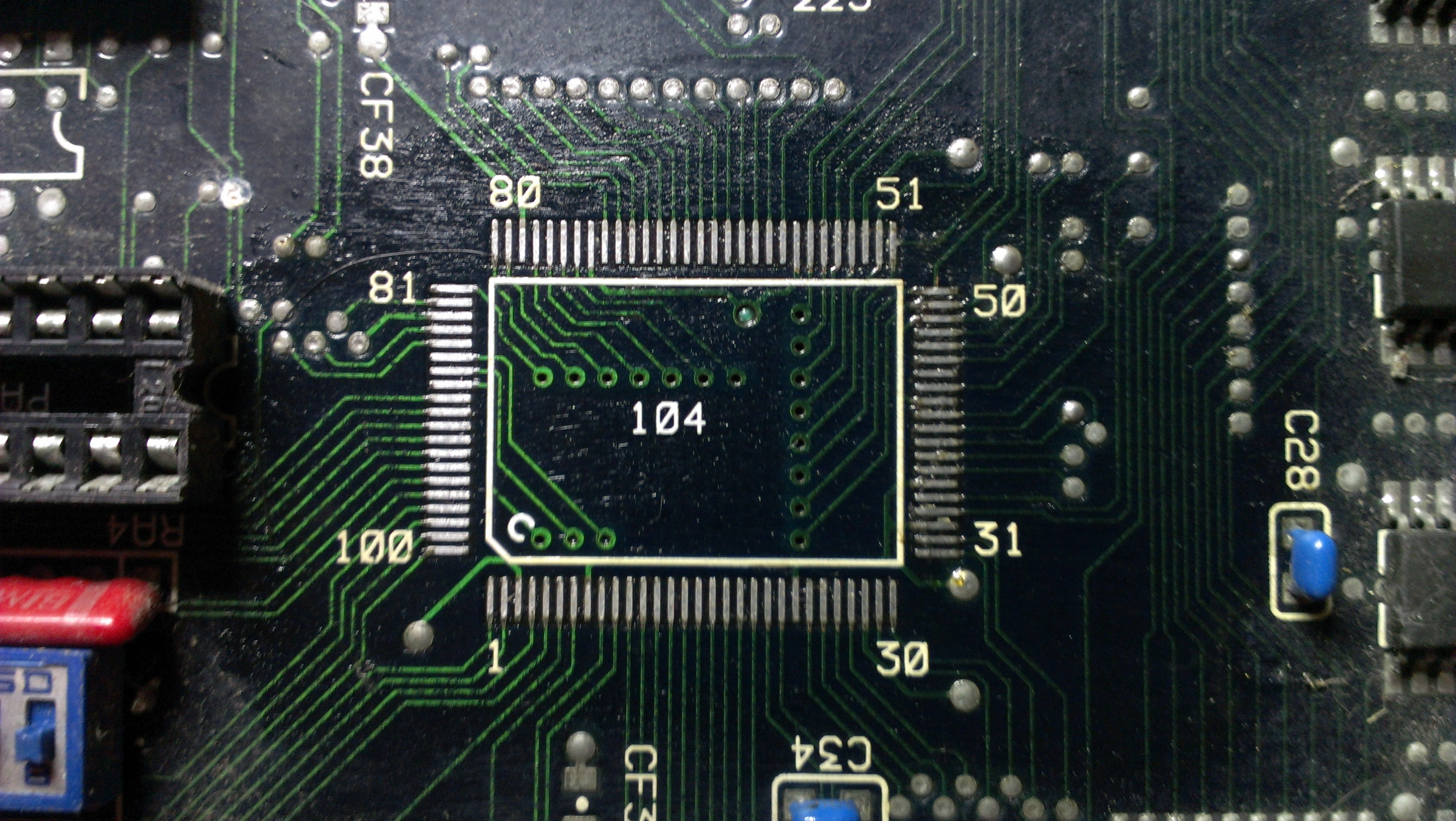 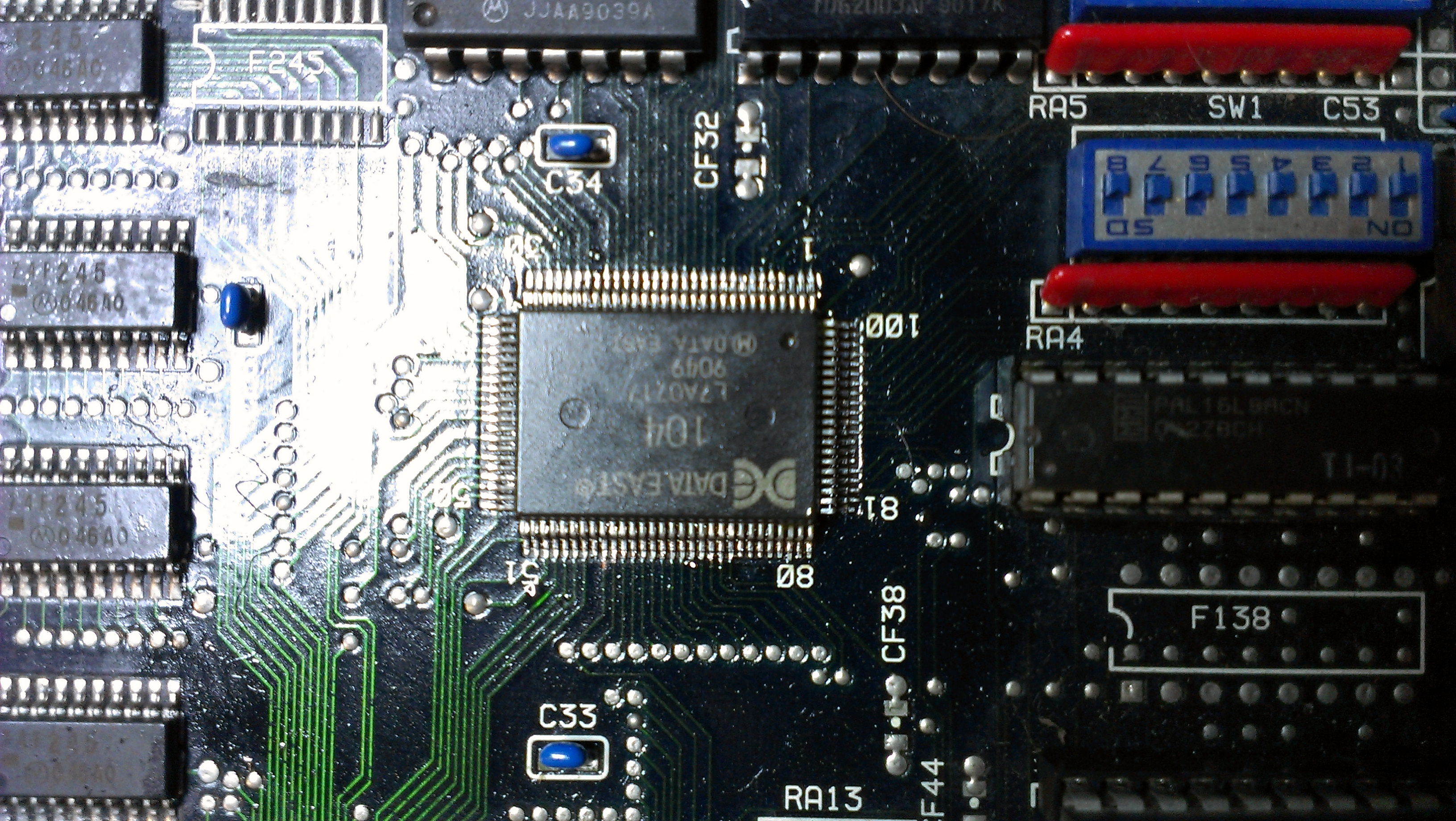 I replaced it with one from my scrap board. WE HAVE SOUND!

And thats it, or so one would think. After about 2 minutes of playing this game, some of the sprites started to go a little crazy. 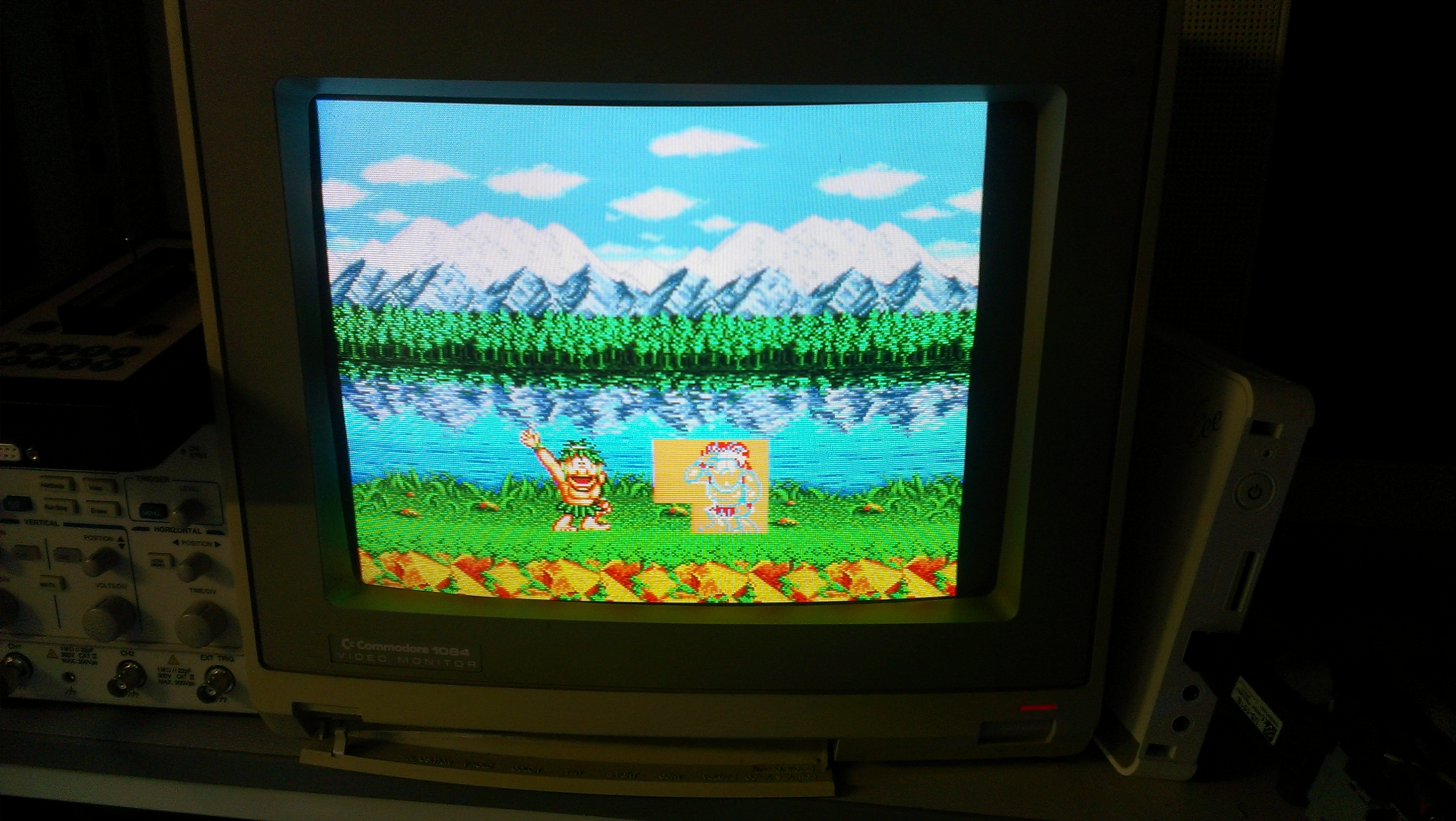 Going over the sprite ROM’s I found another one (MAG-06) with a floating data line. Replaced this with a spare and all is well once again. 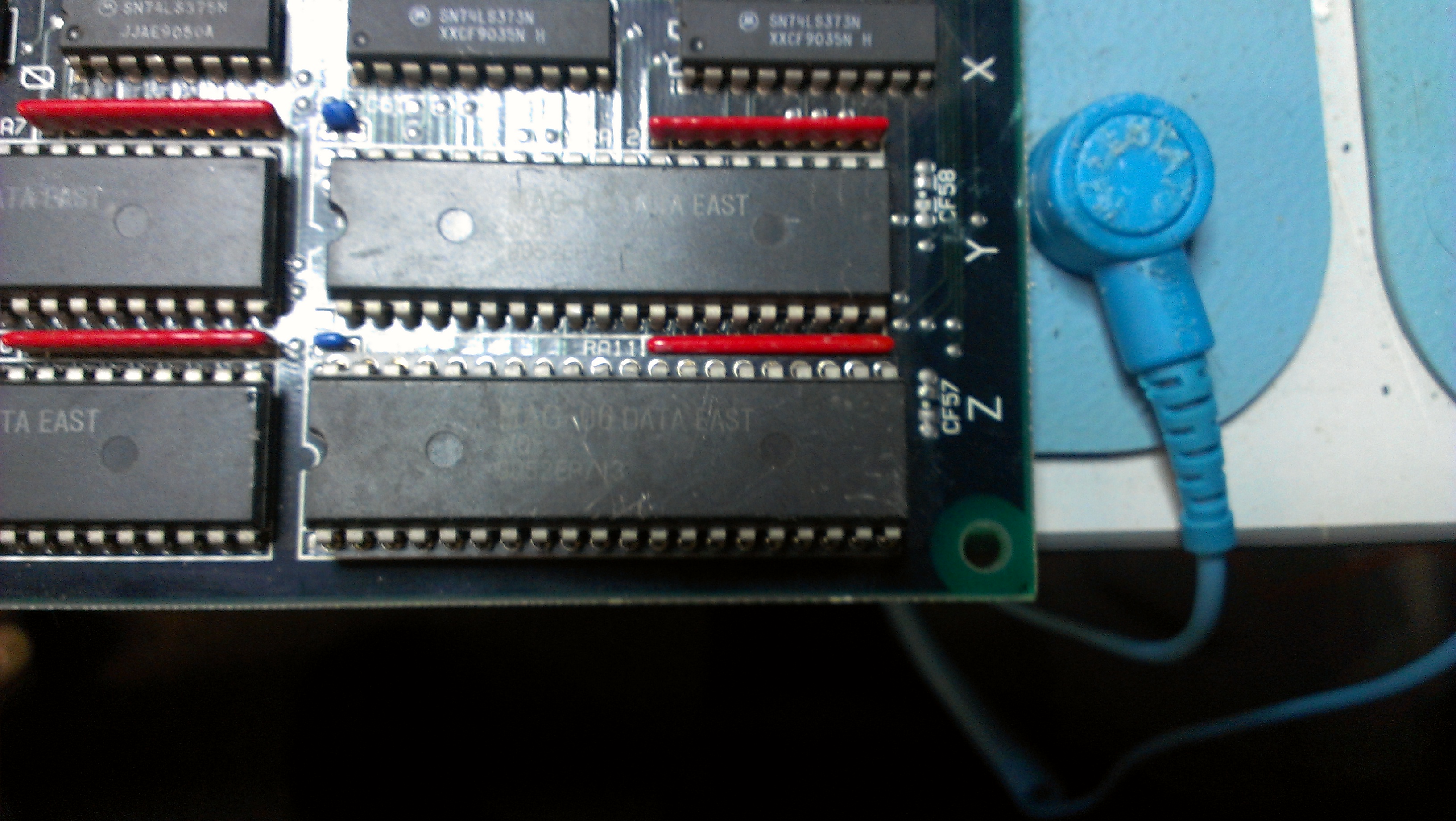 Without a scrap board to take customs from this would have been one for the scrap pile.