Game was dead on power up.
Pressing down on the crystal brought clocks back. Resoldering the crystal didn’t help so there must have been a break internal to the unit. I ordered a spare 18.432MHz crystal oscillator and waited for it to arrive.

The new crystal arrived and fitting it brought the main clock back however my monitor screamed at me.
Checking the output from the 082 custom chip on the scope revealed that the SYNC signal was around 24kHz. 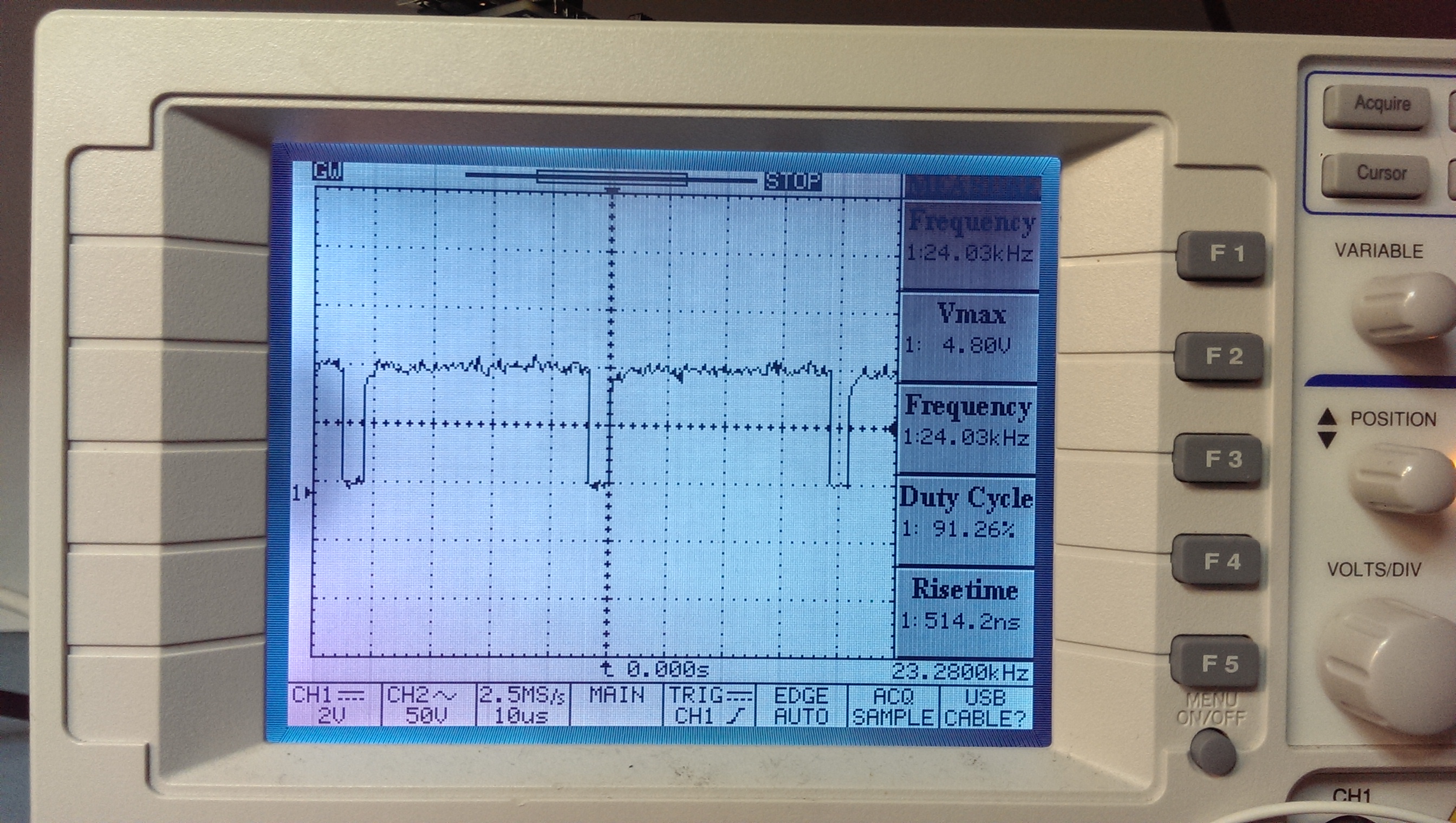 I originally thought the 082 was at fault as id seen so many of them go wrong before but after sleeping on it I started to think this unlikely. At this point I asked for a bit of help from forum user cmonkey. He knows a lot about Konami hardware and has provided a lot of insight to me in the past.
He very generously took some measurements off his Gyruss PCB and it confirmed that the clock input going to the 082 was too high on my board. It should be 6.14MHz into pin 13 and I was getting around 9.14MHz. 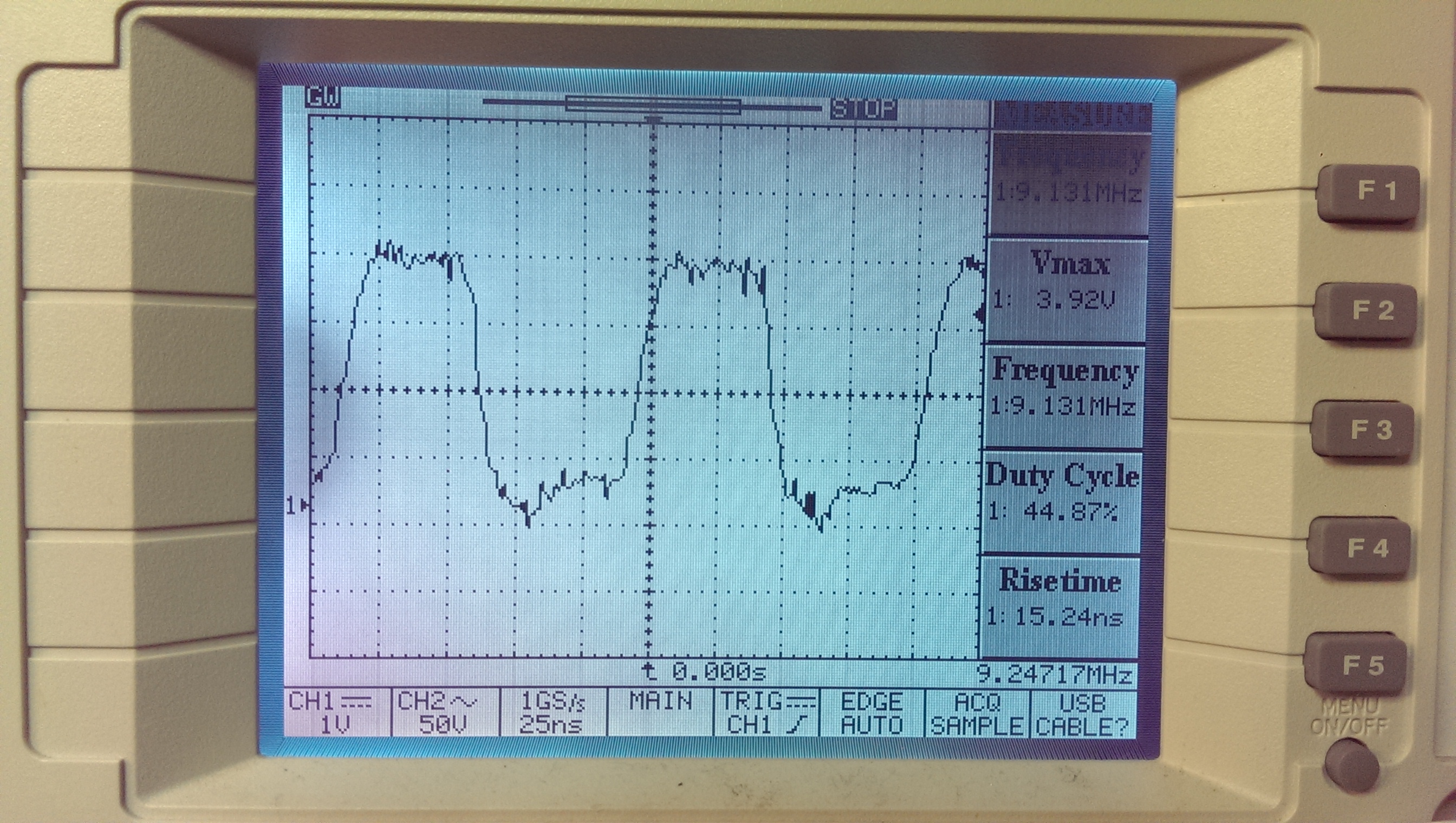 At this point I thought I would do a bit of circuit simulation and drew out the clock generation circuit in PSpice.

This is how the circuit should be. 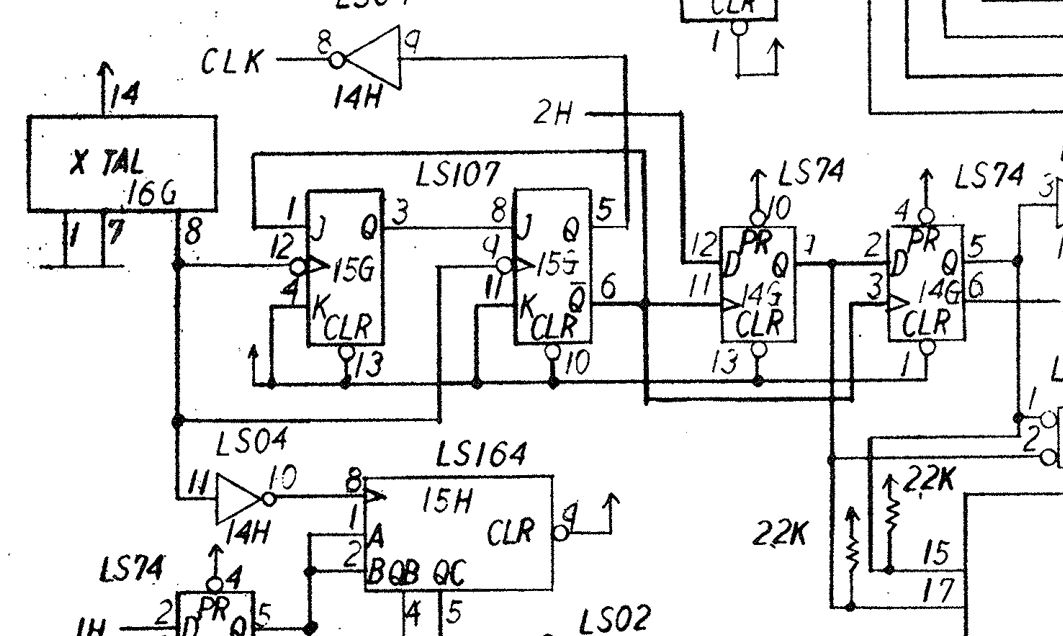 Exactly what I was wanting to see.
I removed the LS107 and tested it. It failed as expected.

I found one on a scrap board. This brought everything back to life. 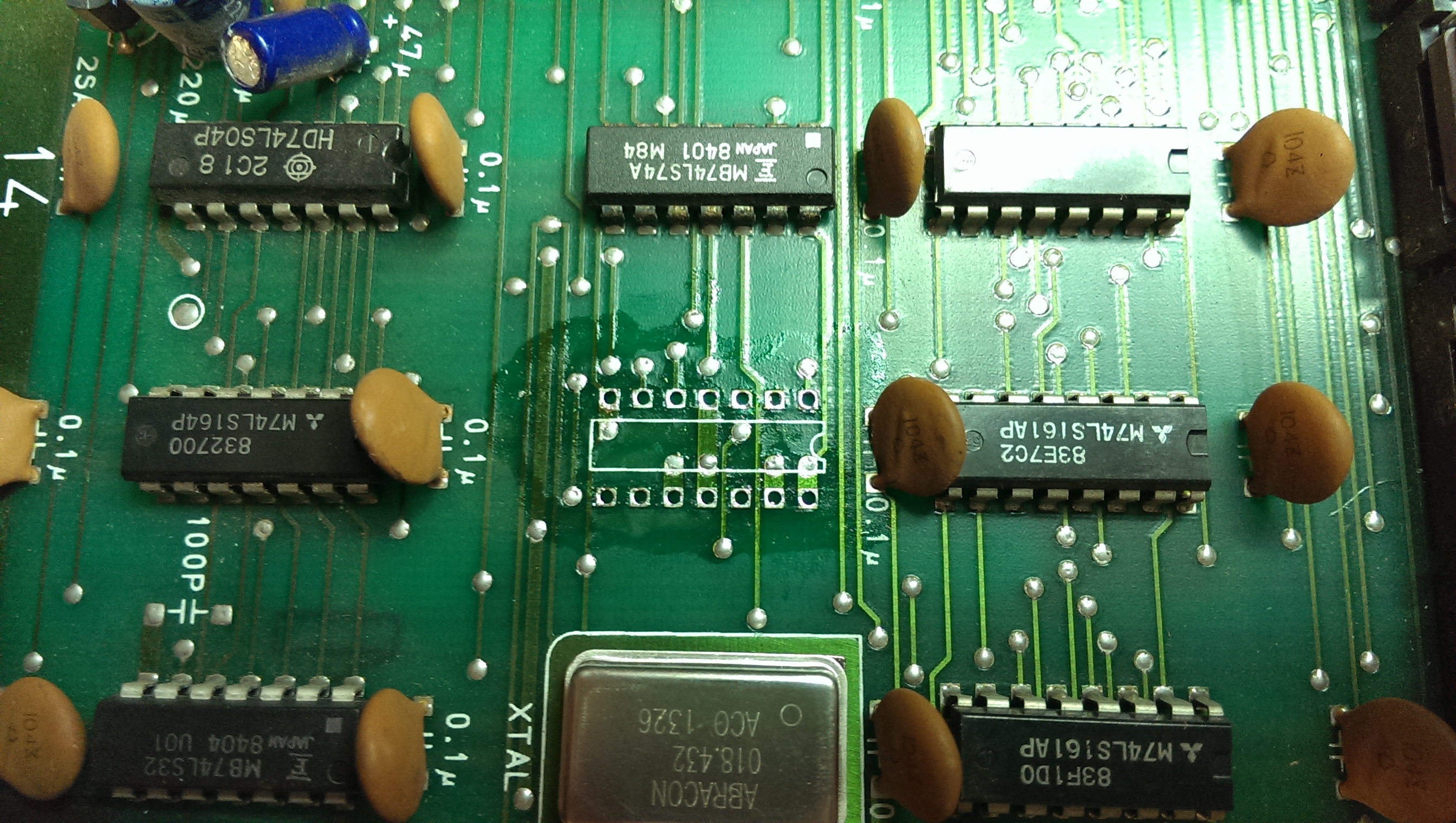 Powering the board up initially gave me a static screen of 0’s. This is what you normally see during the start of the POST. Ill get back to this issue later.
Powering down and back up again gave me this: 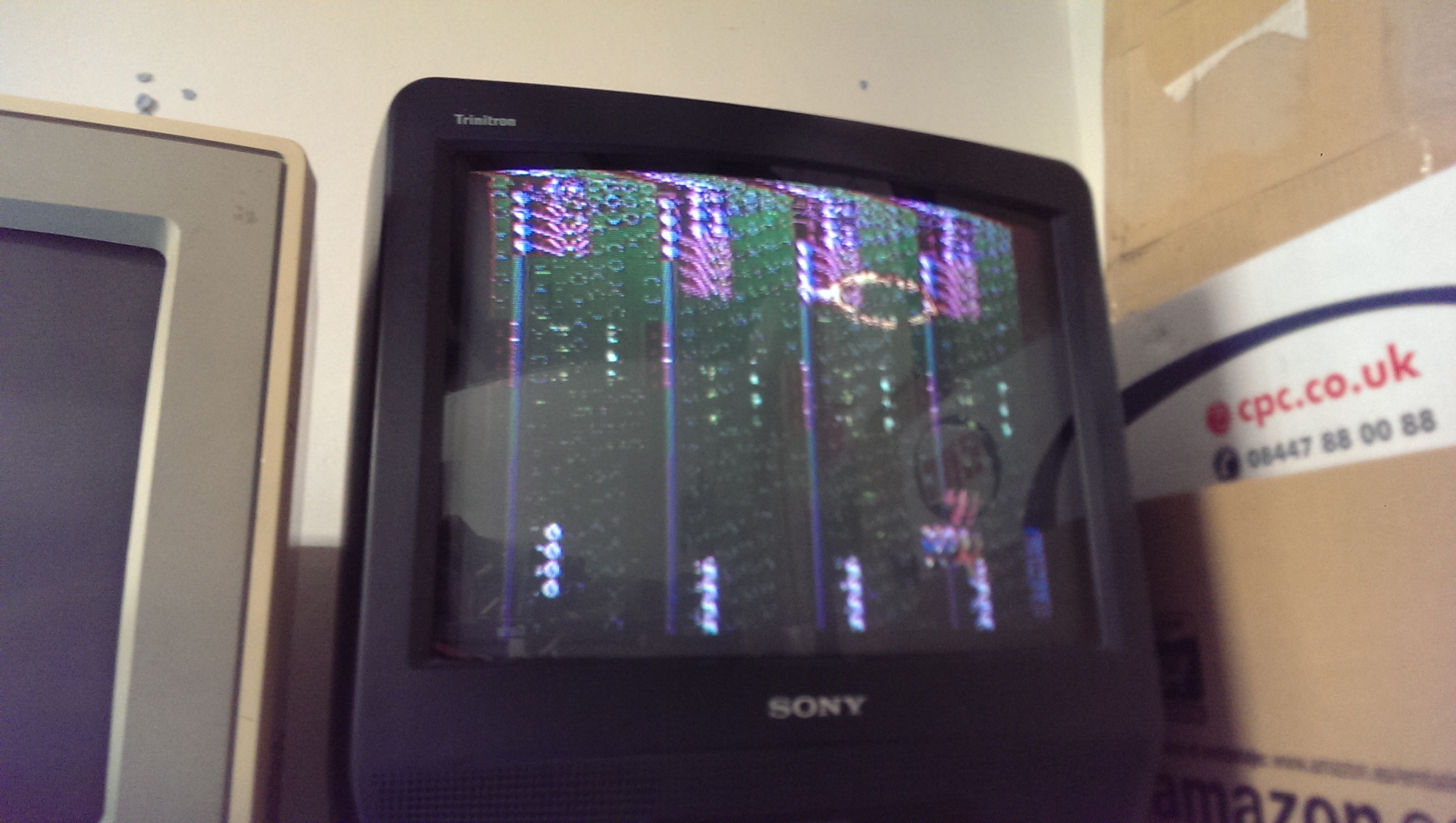 Using MAME I confirmed the Video RAM area was to blame.
Checking the address lines on the 8128 RAM at location 3E revealed 4 dead lines. I traced these back to 74LS157 at location 5E. Replacing this brought back the graphics. 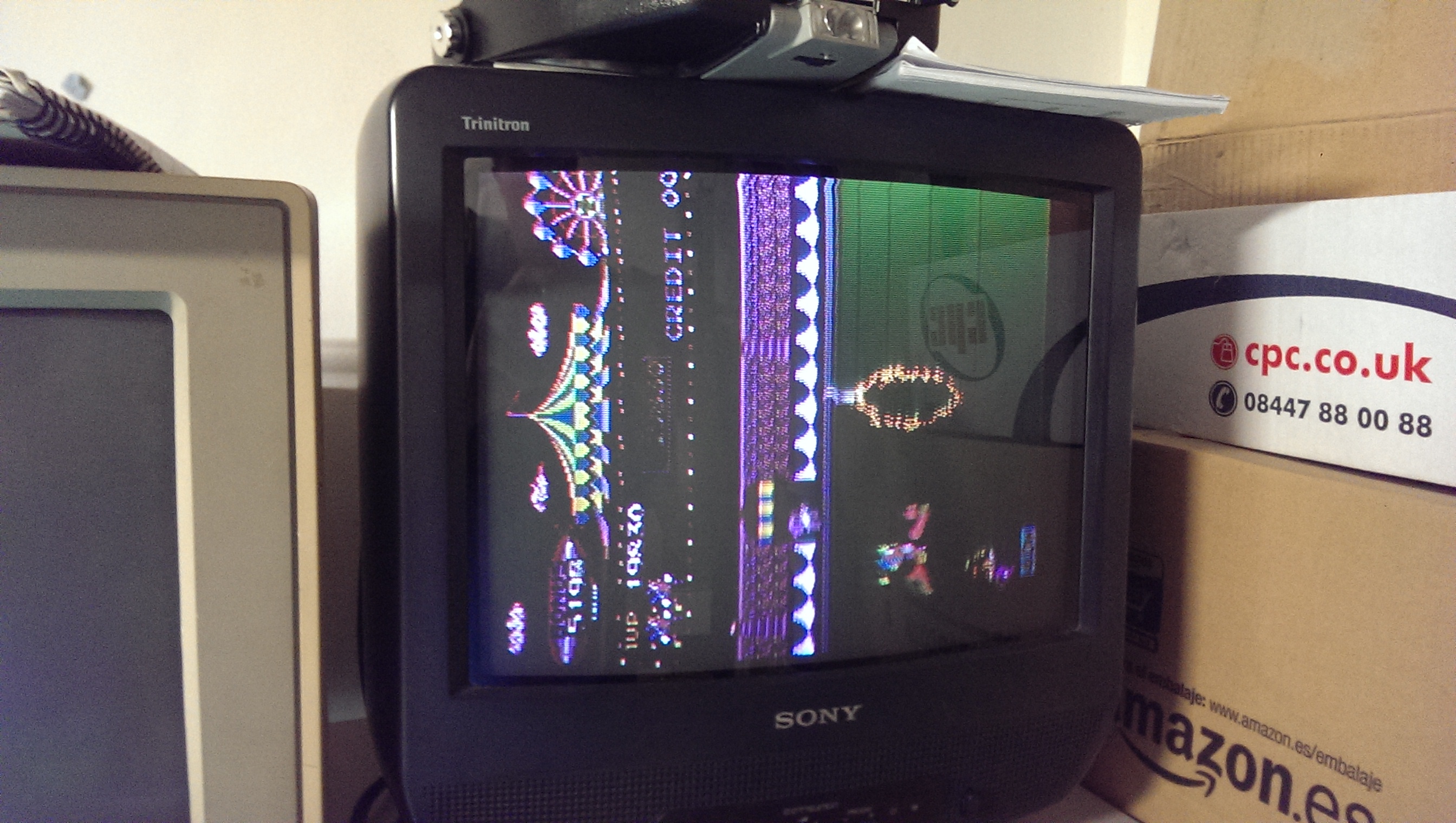 There is still a small graphics issue at this point which I struggled to find and also the intermittent power up problem I mentioned earlier so thought I would move on to the other issue of the controls not working.

Neither of the coin inputs work.
Back to the schematics, I can see where the signal comes in and taking some measurements shows there is something wrong as I’m getting around 1v at pin 6 of the chip at 3F.
There is very little to this part of the circuit and the resistor array looked good so I desoldered the 74LS253 and it failed all tests. Replacing this brought the controls back.

So back to my remaining problems.
First, the graphics issue. Its hard to describe but on the parts of the screen where the coloured dots cycle round this also affected half of the 8×8 tile above it. 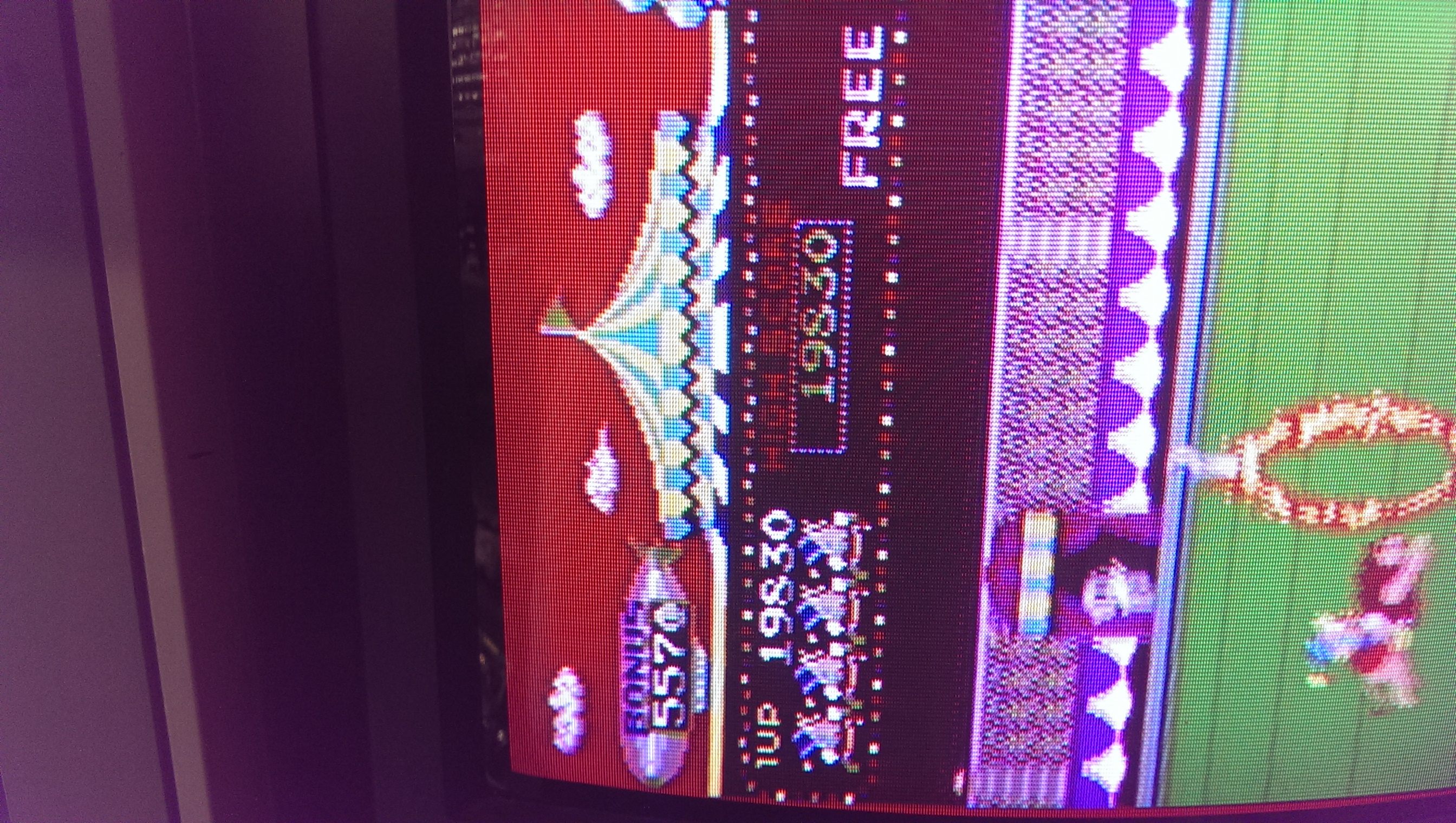 As it only affected half the tile I eventually came to the conclusion it was a timing issue. This led me right back to the beginning where the reset circuit lies.
The power on reset is generated by a 555 timer which goes through a bit of logic and eventually out to the rest of the board as a /RES signal. 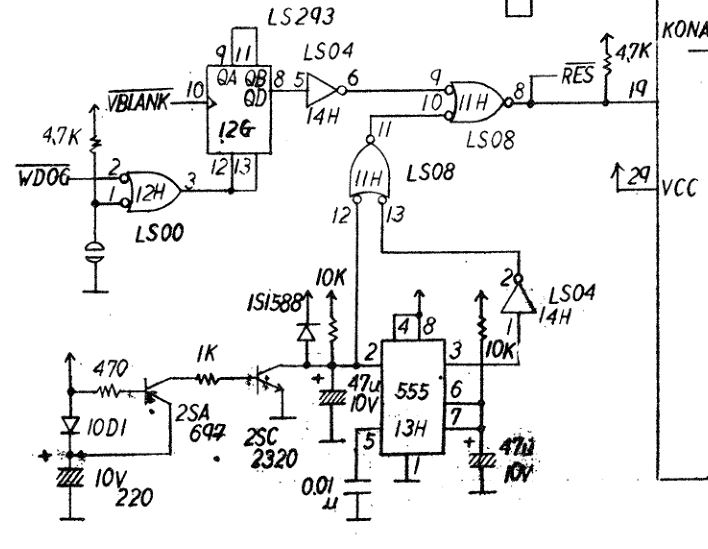 This signal comes out on pin 8 of a 74LS08 AND gate. Working back I found I had no output on pin 11 at all. I desoldered this chip and replaced it. 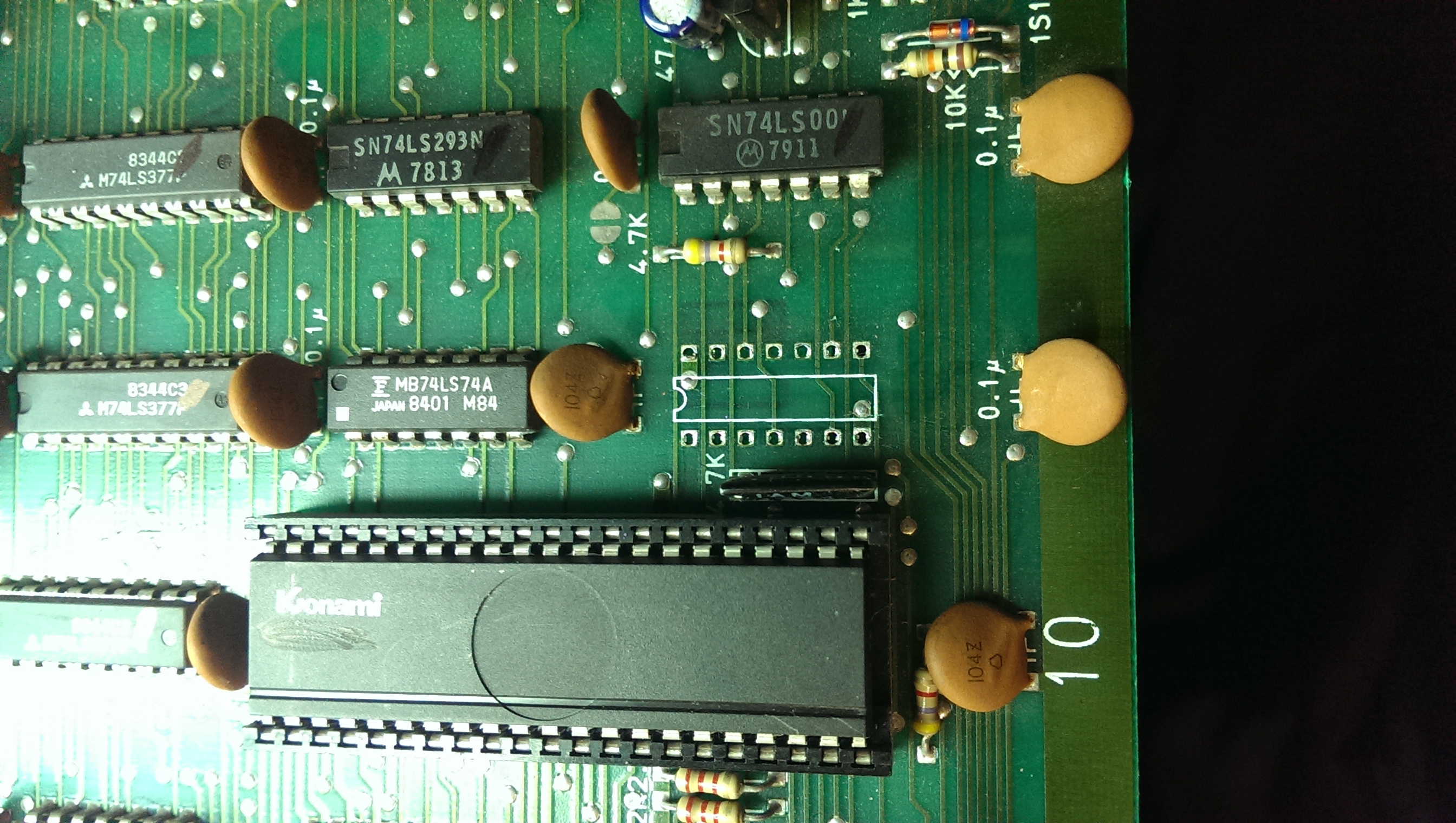 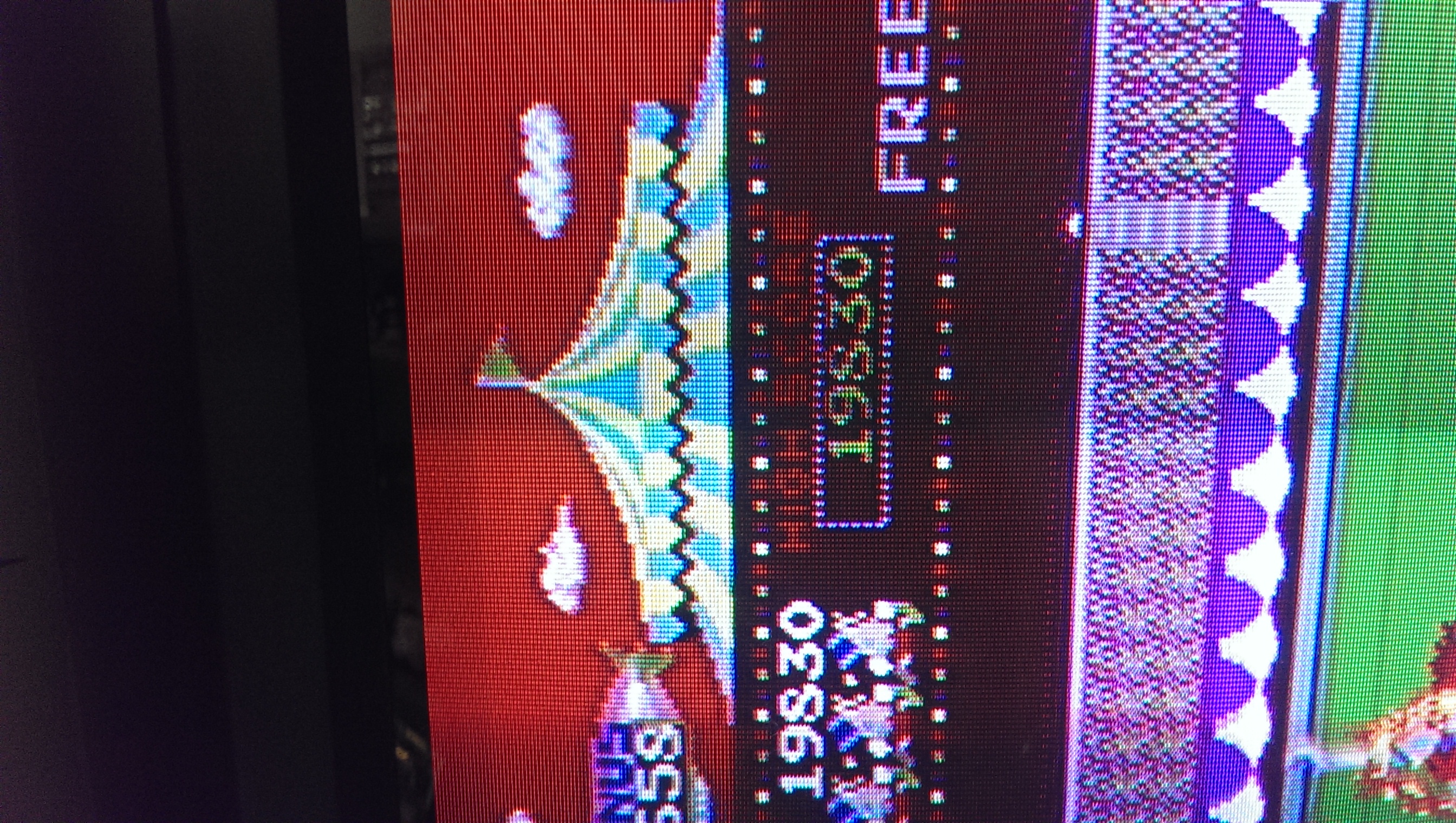 I guess it could have been caused by a timing issue after all?

This board looked is VERY good condition and, looking at the edge connector, it cant have been powered up more than a handful of times so its interesting to see that all these problems were present.
Very pleased I got this fixed.