But among these titles, it is the only game that offers a stereo output thru a 4-pin connector on the board (labeled CN2).

First, you have to select stereo by plugging a connector on CN4 (and put switch 4 of DIPSW3 to off). 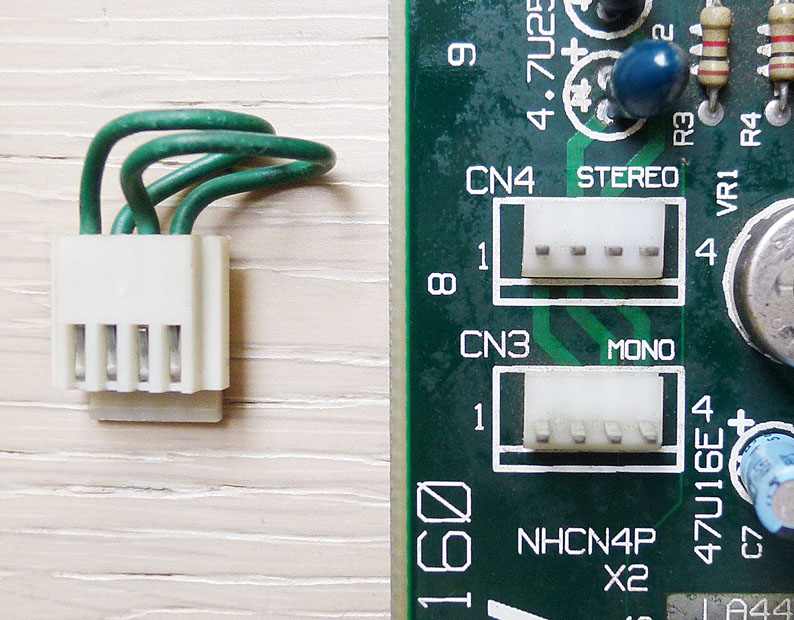 The thing is that all the boards I’ve seen still delivers mono sound when you plug this connector (originally brought by Konami and present on the board) on the stereo plug. Why ? Because it doesn’t have the good wiring…

As shown on the picture above, this connector originally comes with pin #1 wired to #2 and pin #3 wired to #4. In that way and plugged on the stereo connector (CN4), it mixes channel 1 and channel 2 from the YM3012 DAC to the LA4445 amp which results a mono output.

To separate the channels, you have to simply modify the connector by wiring pin #1 to #3 and pin #2 to #4.
Now plug it on CN4 and enjoy stereo sound out of CN2. 🙂

There are other Konami games that use the same connector to choose mono or stereo. I’m not sure about the wiring for every game. To my knowledge they are:

ps. If anybody knows if the original wiring on these boards allows to deliver stereo sound or any other board that is using this connector, I would be glad to know and add it here.