Had this original Double Dragon II – The Revenge in my faulty boards pile so I deciced to take a look it hoping to fix it and complete the trilogy in my collection: 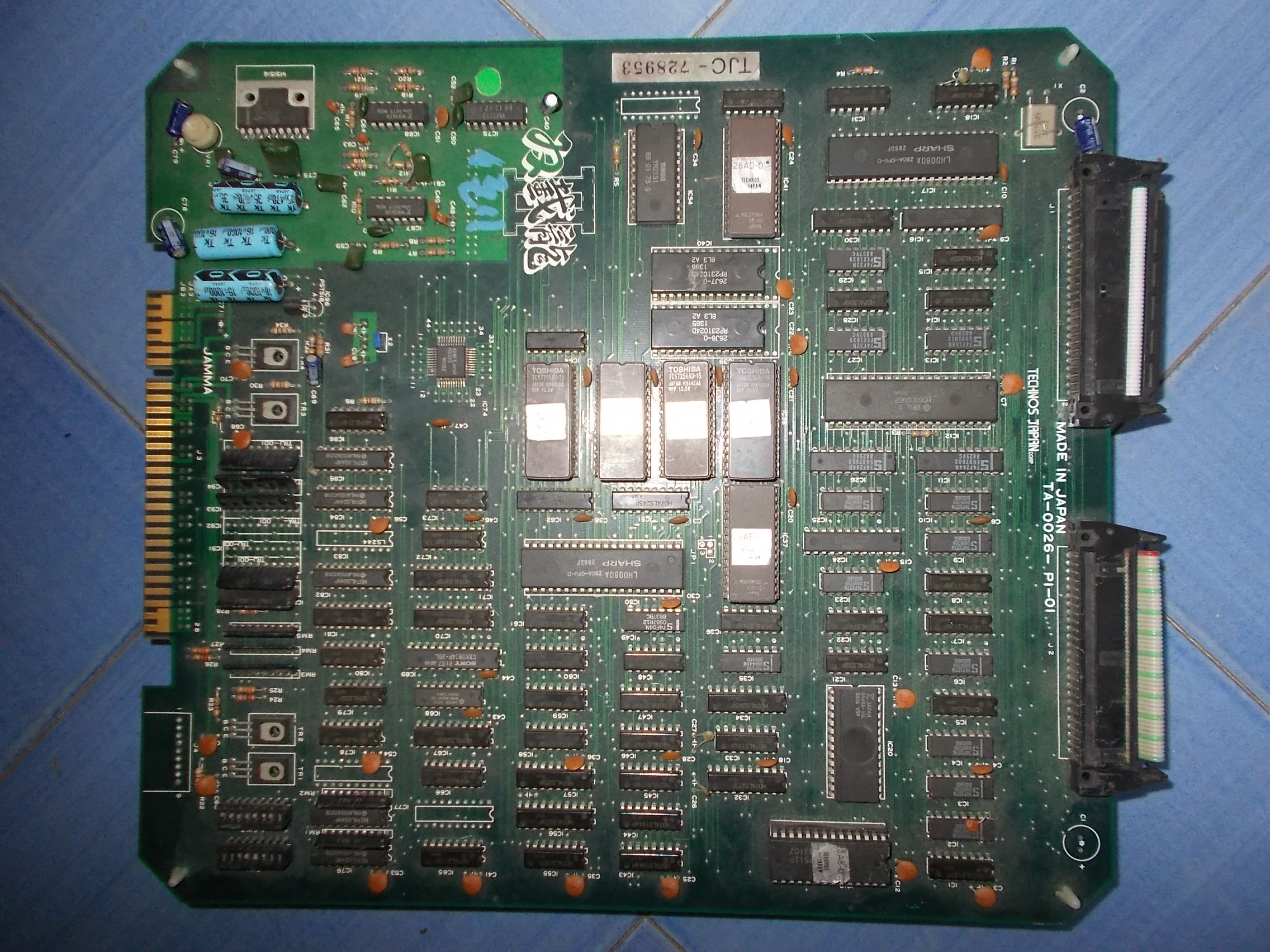 Once powered it up I was greeted by this static garbage screen: 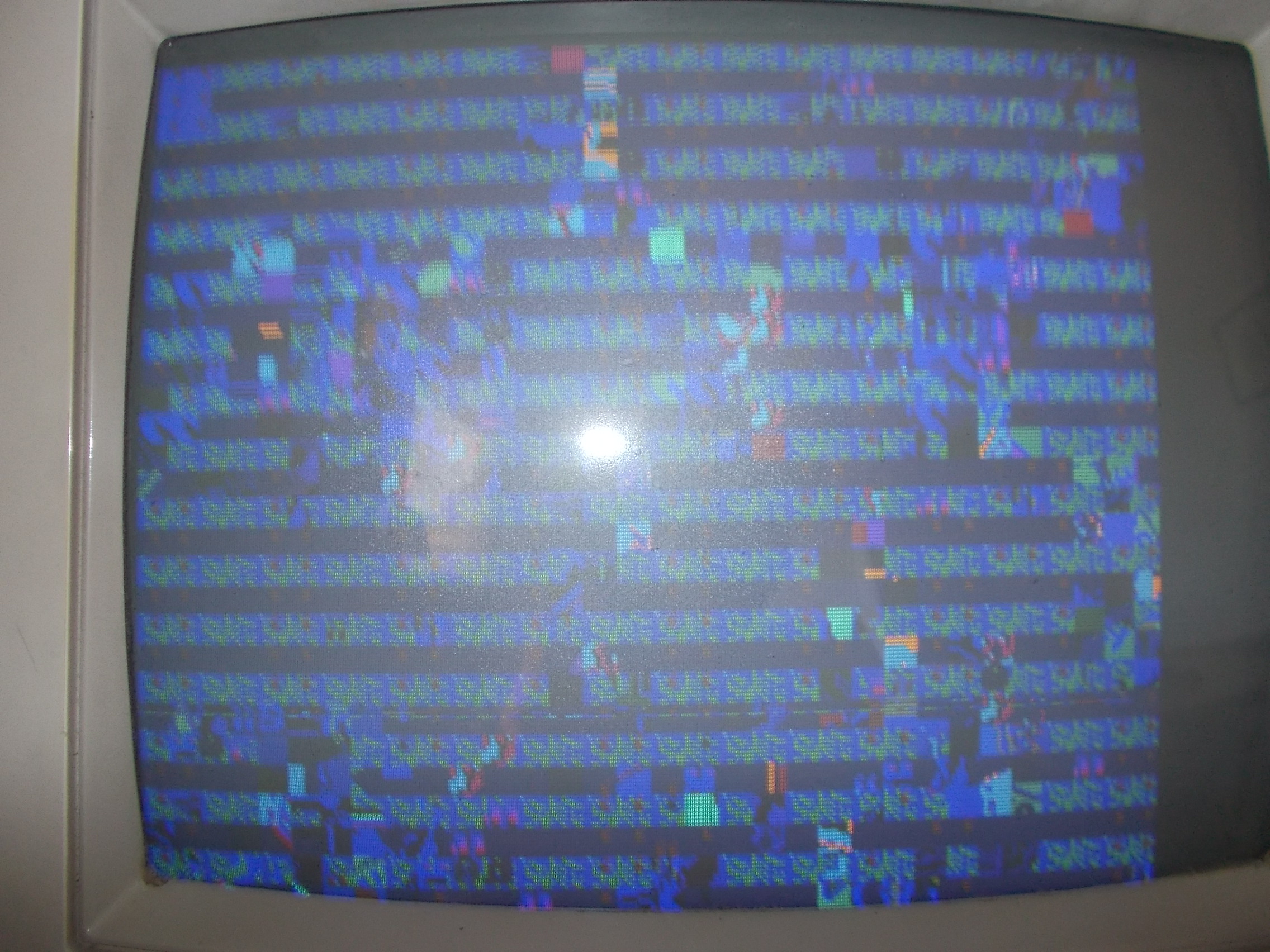 A static screen is a clear sign of some trouble in the main code execution.So, for first, I went to dump the program ROMs and found a bad device which game me different checksum at each reading.Since my ROM set was an undumped japanese one, I was forced to convert my board into the US set which is available.This did not lead to any improvement so further investigation was needed.When I removed the EPROMs, I noticed that the socket @IC63 (the one of the bad EPROM) was oxidized: 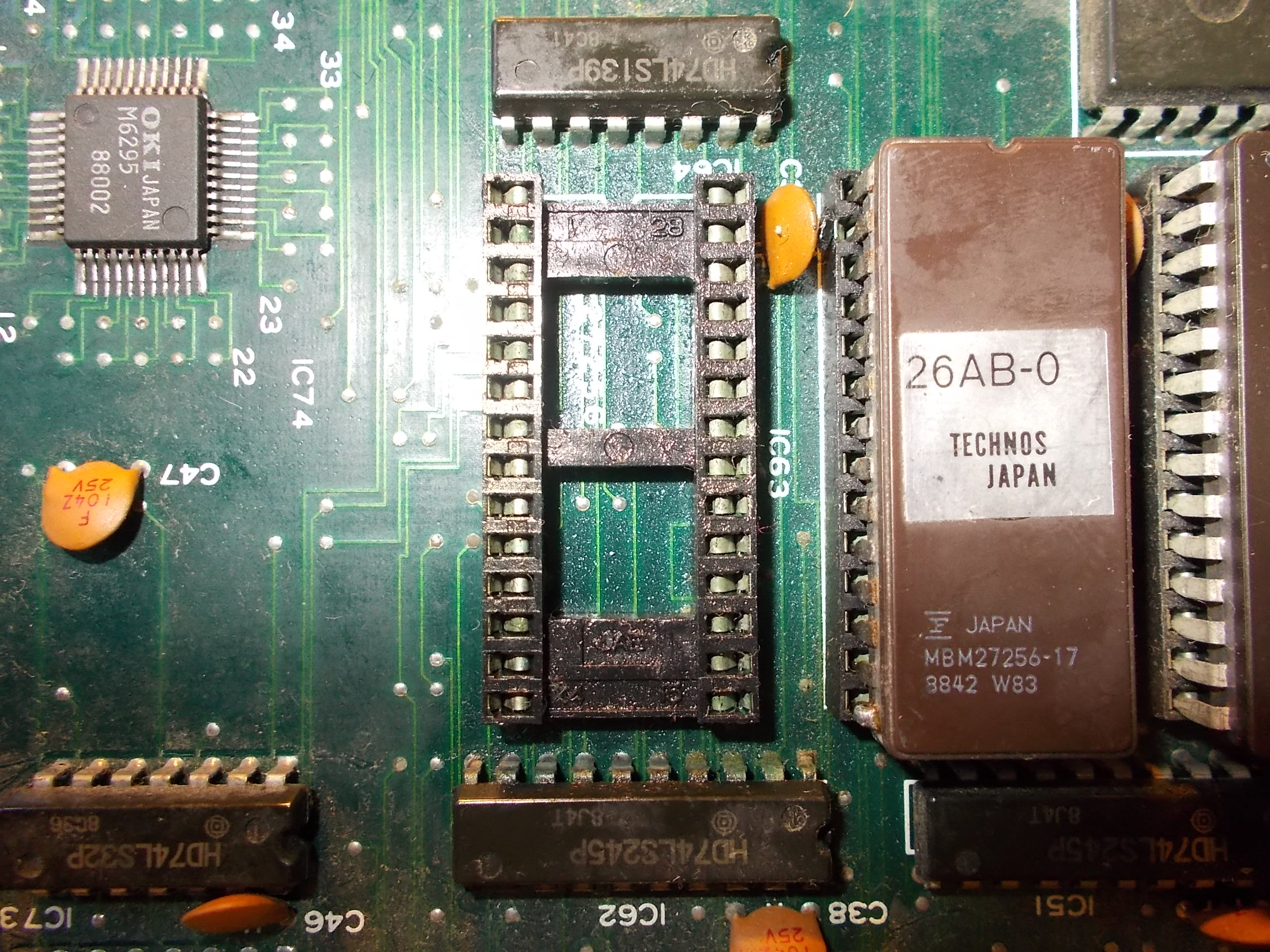 I decided to replace it.When , before installing the new one, I was checking all the connections, I found an eaten trace underneath which should have tied pin 2 of the 74LS138 @IC64 (which generates the /CE signals for program ROMs) to pin 9 of a 74LS273 @IC71:

Once restored the connection board finally booted up but with severe sprites issues and corrupted/missing sound FXs:

Probing RAMs on video board I found some data lines stuck low on a TMM2015 @IC83 : 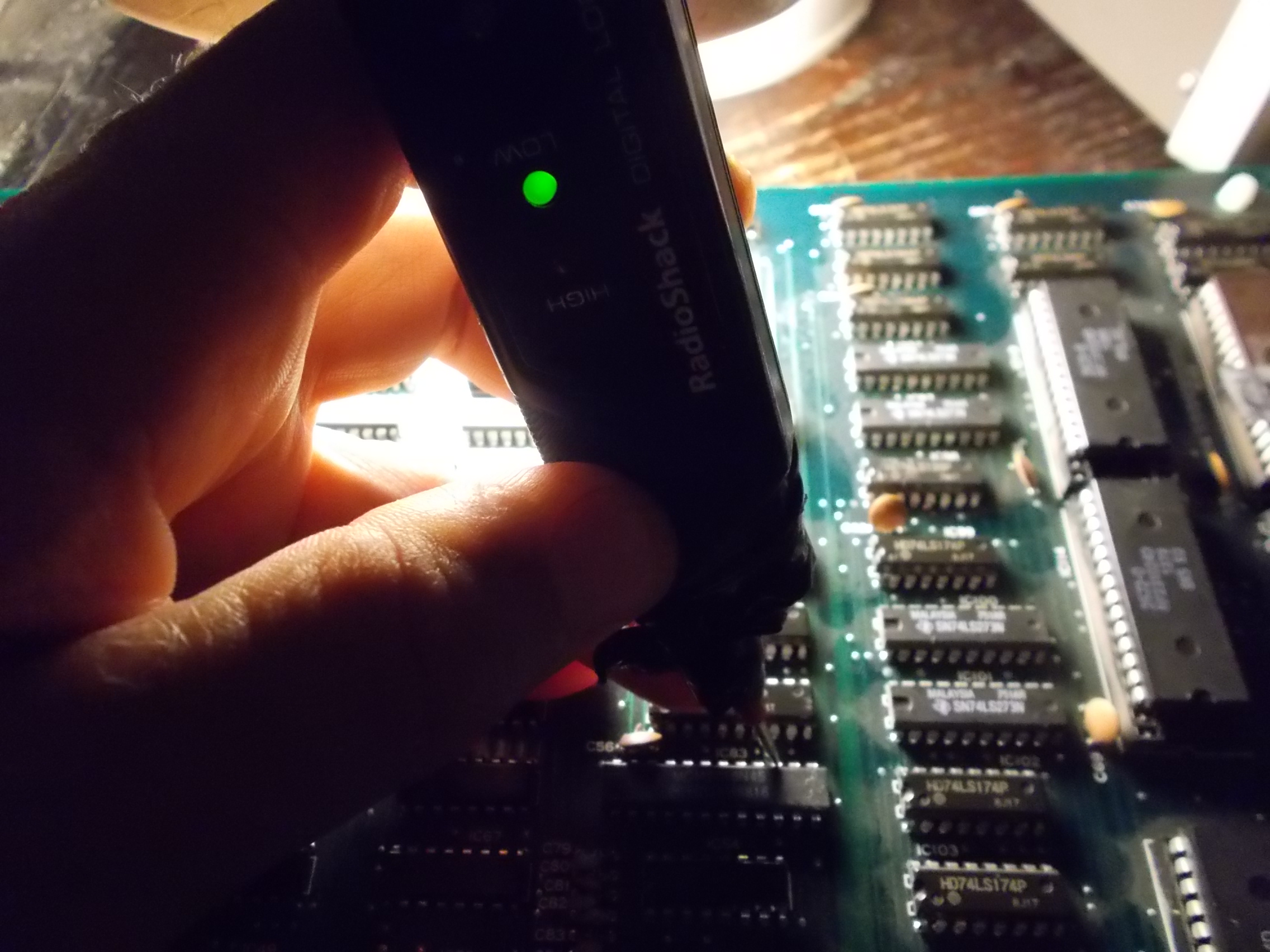 This was due two broken traces on solderside which I promptly patched: 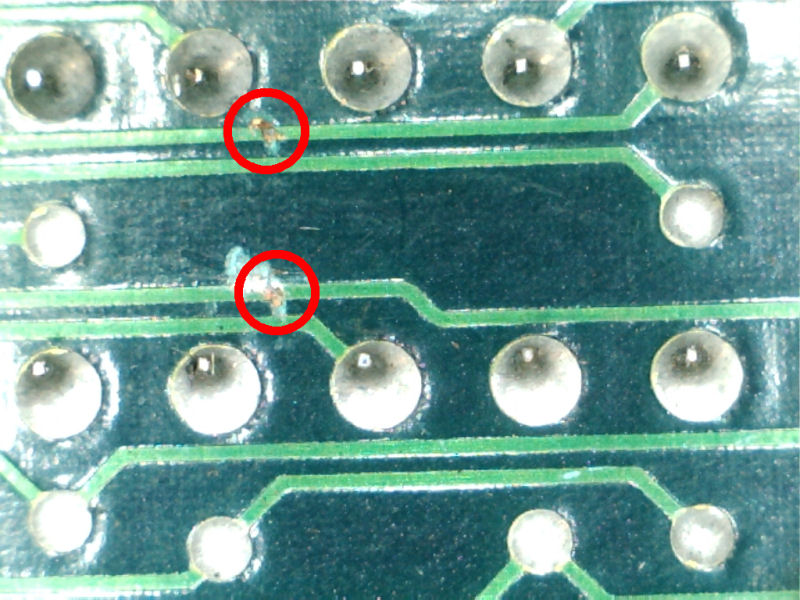 This improved a little the issue giving back the missing lines to sprites but they were still wrong and garbled.Looking at MAME source, I could figured out that one of the two Z80 (the one @IC50) on top board is used as sprites CPU which takes data from a 27512 EPROM @IC37 and write/read them on a 6116 SRAM @IC24 : 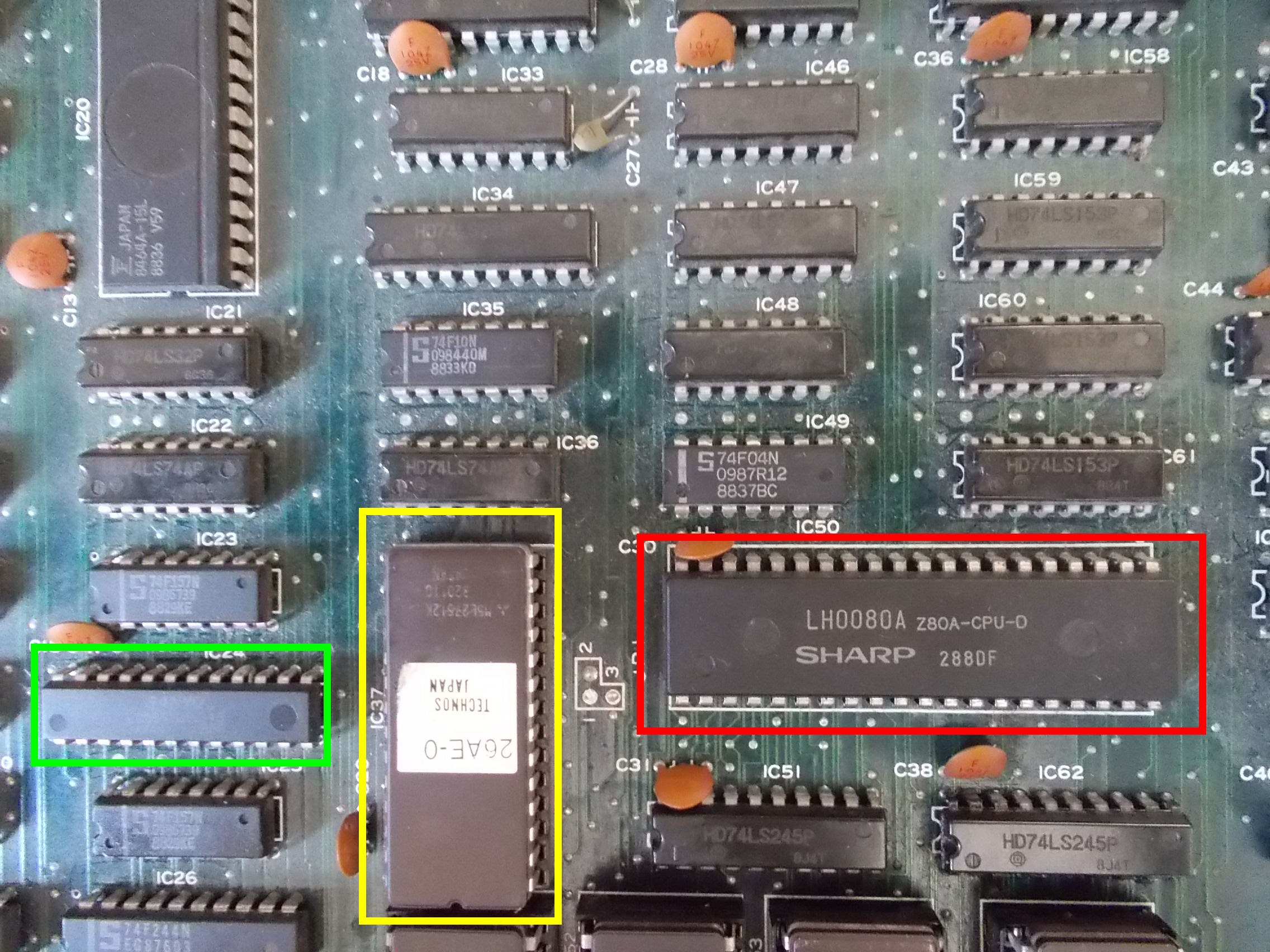 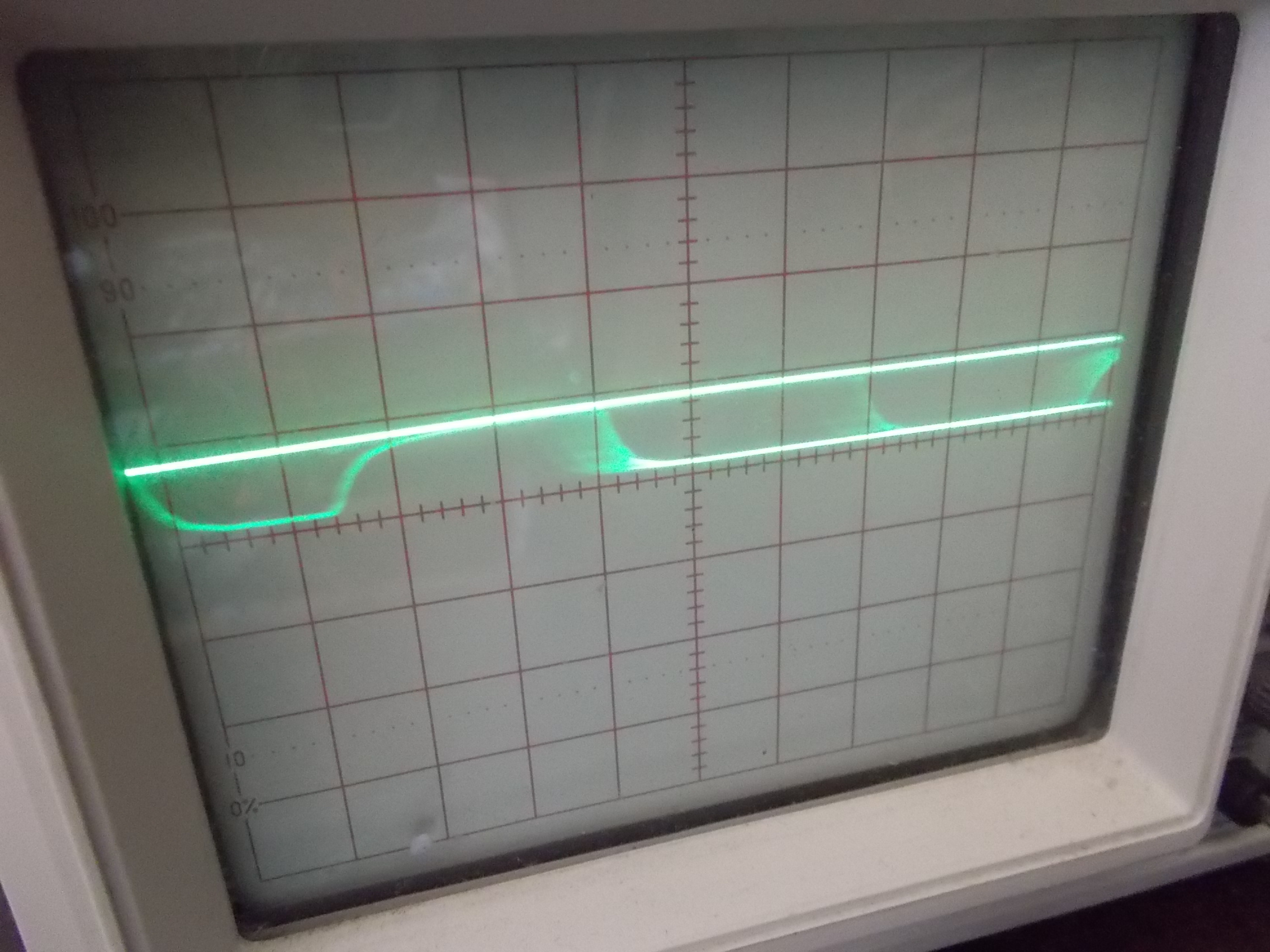 Once removed the chip, it failed when tested out-of-circuit:

With a good RAM chip all the sprites were correctly restored : 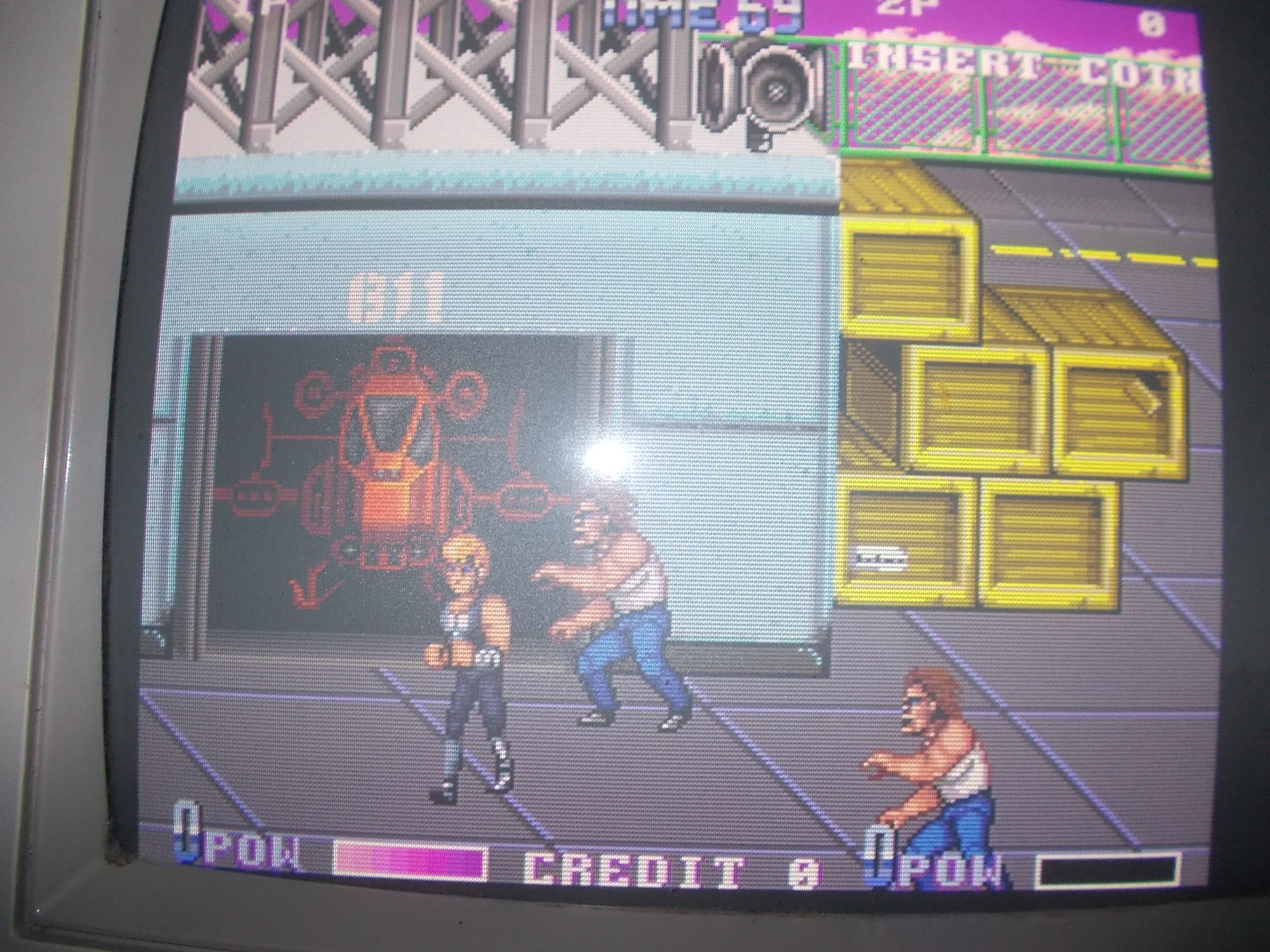 So I moved to troubleshoot the sound FXs issue.Samples are played by an OKI MSM6295 @IC74 with takes data from two 28 pin 1Mbit MASK ROMs @IC39 and IC40: 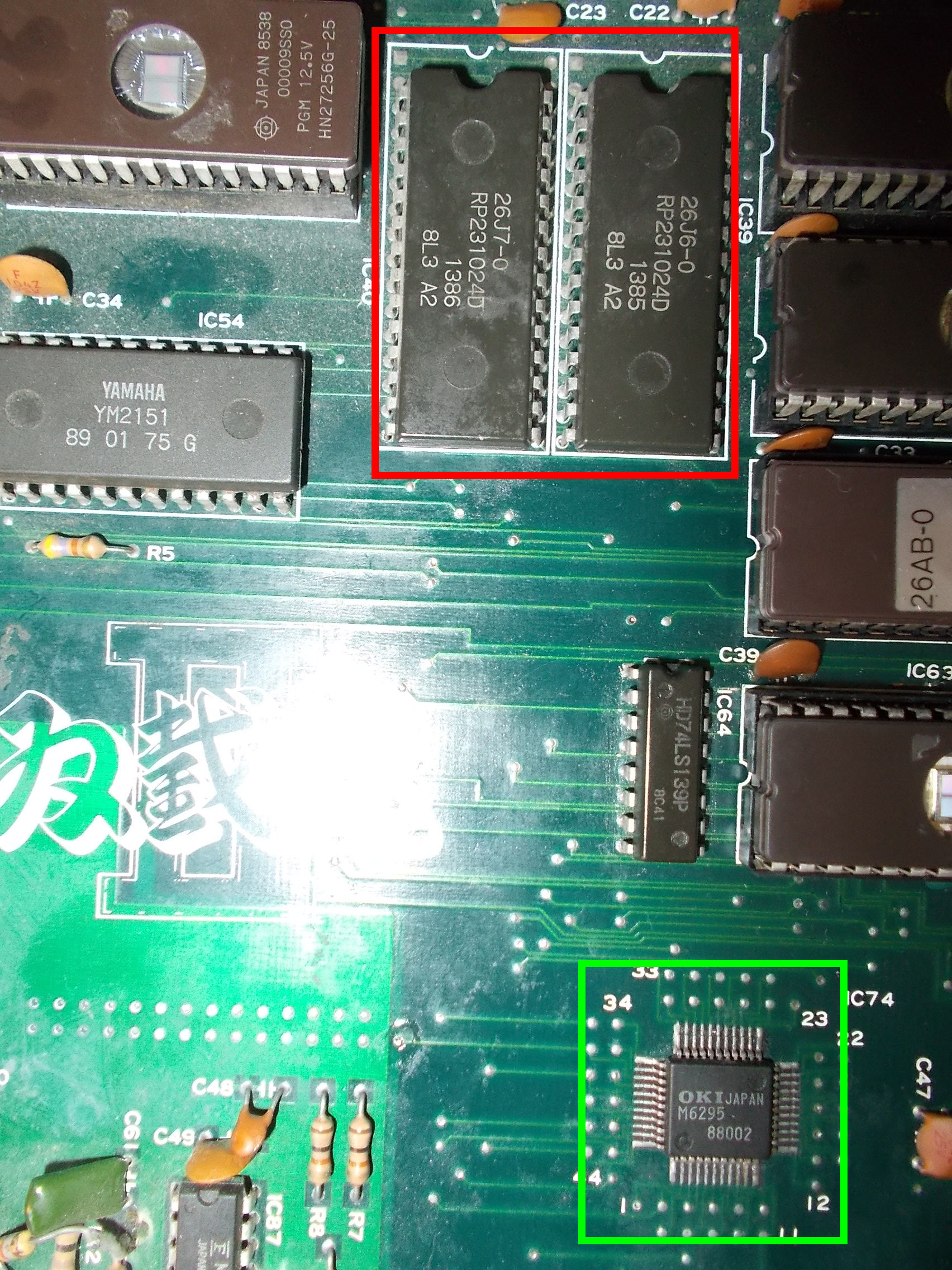 Probing the two MASK ROMs revealed that data came out when requested so the problem had to be in the OKI MSM6295 chip which played them badly.I removed it : 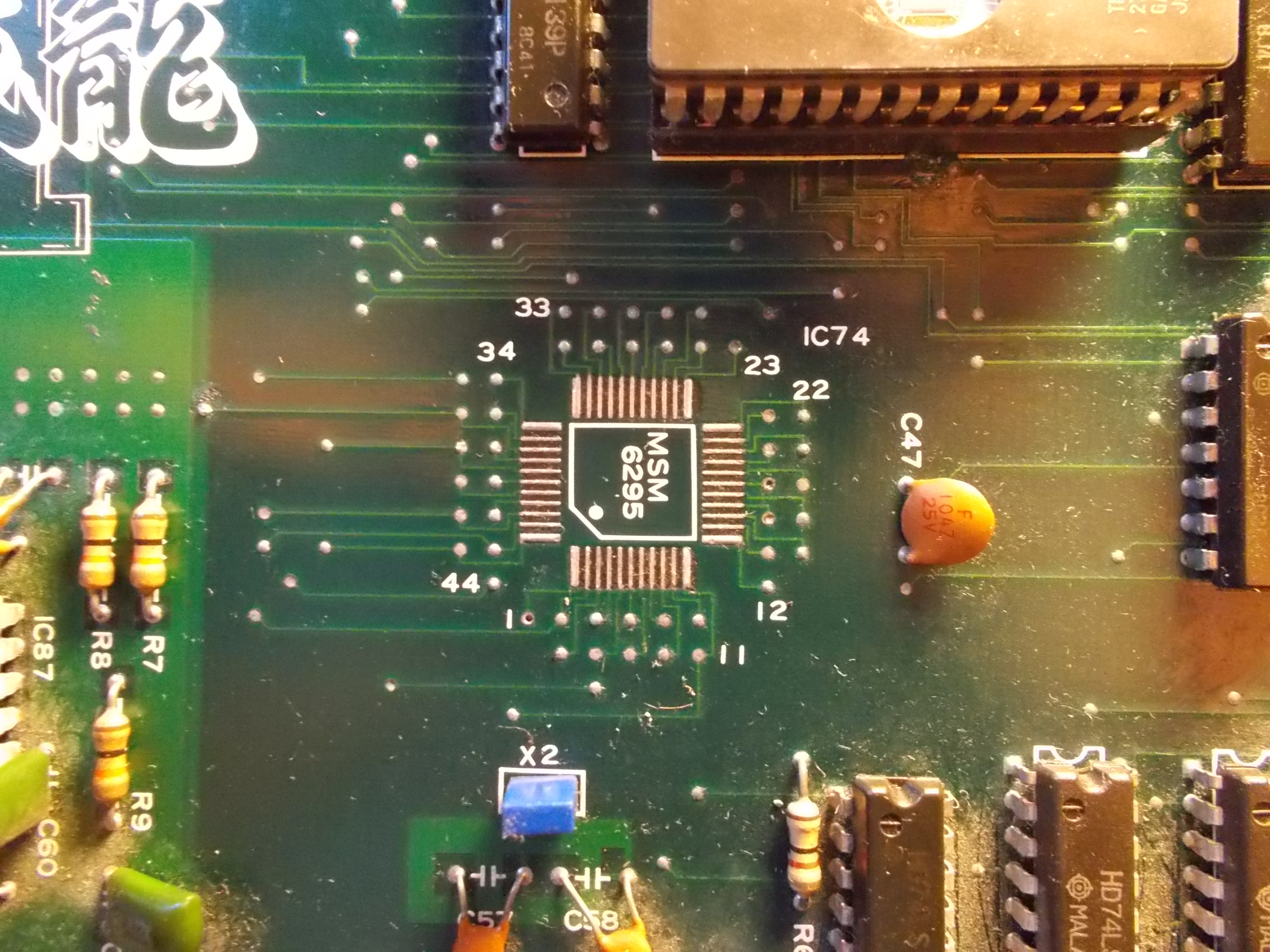 and put back a good one: 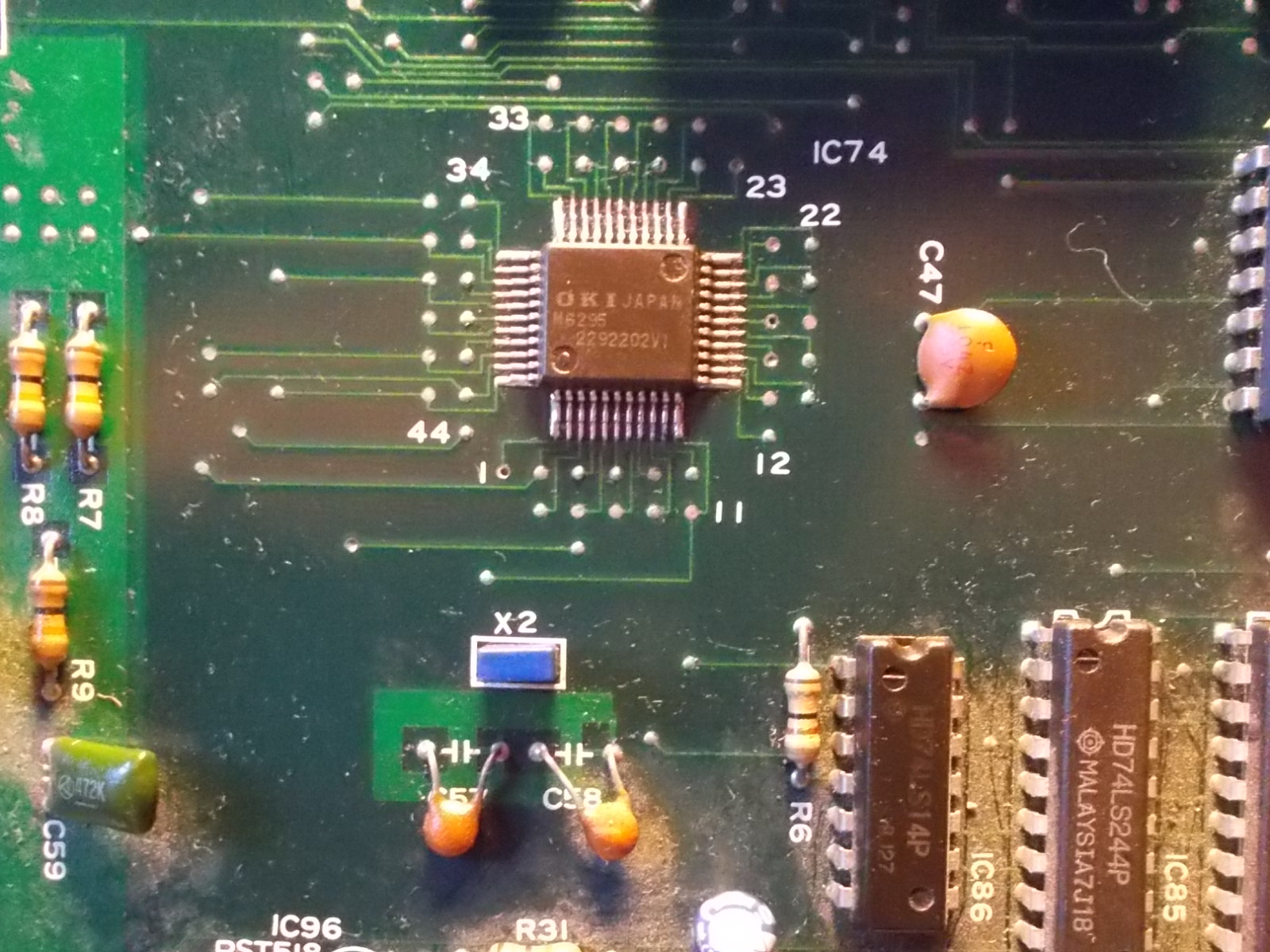 This restored ADPCM samples.Board 100% fixed and board trilogy complete!