First of all I want to thank JROK for providing me all the technical info and allowing its public release, without his help I would not have ever made.Let’s start with the story.

Some time ago a  friend of mine sent me his Splatterhouse PCB bought as working saying it got stuck upon boot  on ‘ROM TEST START!! PLEASE WAIT..’ message displayed upside down on a screen filled with red zero.So I started to investigate on the net and found that usually this kind of issues are caused by a faulty custom chip marked ’64A1′ @M4 on ROM board.This was confirmed by swapping this IC in another CPU board of Galaga88 with this missing component , in this case I got an ‘EEPROM ERROR’ message which is a further proof of the fault.

Thanks always to JROK we know that this ’64A1′ custom IC is nothing else than a HD63701 MCU with the exception of two custom opcodes not present in original part.You can go deeper into technical reading here:

So, programming a blank HD63701 MCU with the available dump from MAME won’t work due the presence of these two custom opcodes.So, patching a ROM is needed.

In the specific you have to change three bytes in the ROM  “VOICE0” at a specific offset.For example :  in Splatterhouse the offset is $FA8B and the new HEX values are “20 01 56”.

The patch seems to be needed at offset $FA8B for most games, but not all. Here’s a reference table :

So, it was only matter to find some real blank HD63701.My first attempt failed since I bought as new some ICs that they turned out to be already programmed and, since they were the plastic HD637B01VOP one-time-progfammable version, they were unusable for my purpose.But then I was luck and found some HD63701VOC UV erasable ones: 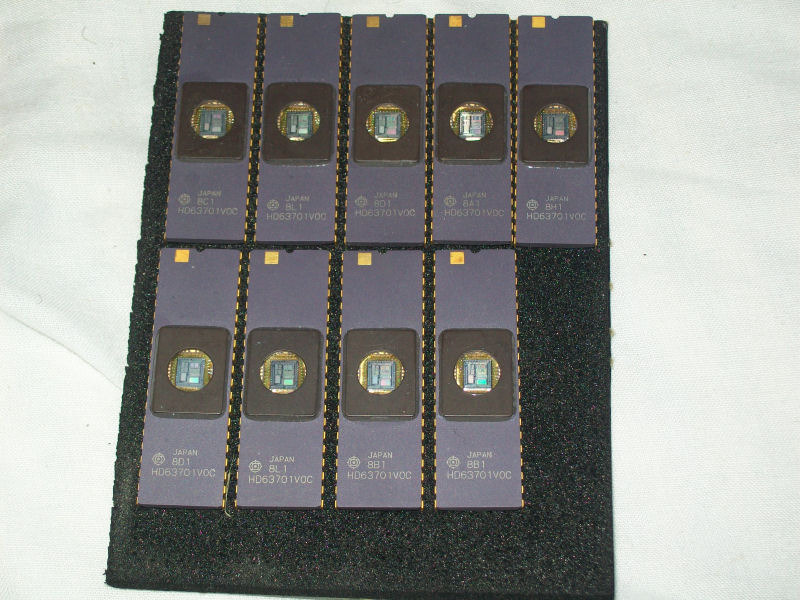 So, it was only matter to program one of these MCU with MAME dump using my Hi-Lo Systems ALL-11C EPROM programmer and, at the same time, replace the ROM ‘VOICE0’ with the properly patched one.Once done, I had confirmation of what the good JROK said about. Operation  ‘NAMCO custom 64A1 replacement’ accomplished.