This will be a long repair log so if you have better to do, come back later… 🙂

Got this Konami Nemesis PCB from my friend ‘robotype’.Board was in very good condition despite its age (it’s 30 years old) 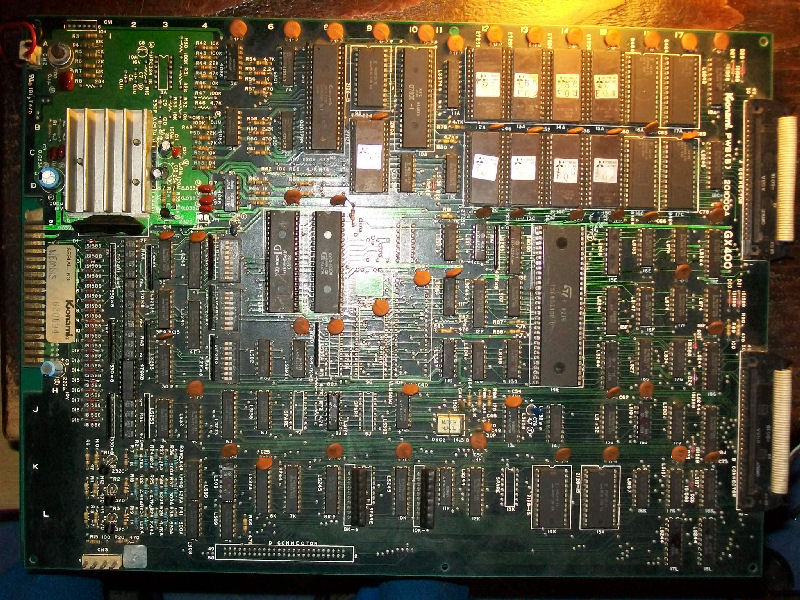 but bought from him as not working and infact it was just so : 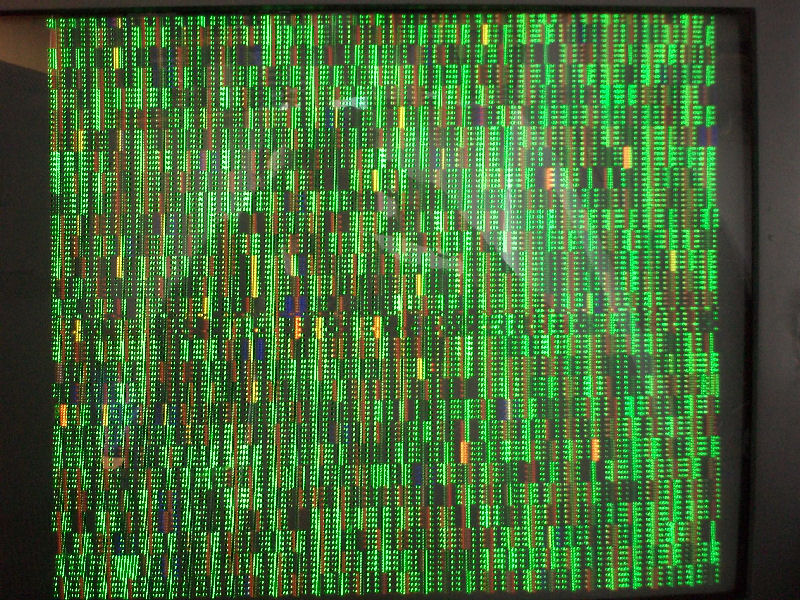 All I got was this static scambled screen.First I checked main CPU 68000, it  had random activity on DATA/ADDRESS bus) but, worst thing,  it was was burning hot to the touch!

So I decided to replace and socketed it (faulty one showed a resistance of only 65 Ohm across VCC and GND).With a new CPU fitted situation was a little improved but still some address lines were stuck LOW or HIGH.Fired up my Fluke 9010A with a 68000 POD and I could successfully test the WORK RAMs (four MB8464).So there was someting that drove the address lines.Piggybacking the 74LS244 @17L on CPU board I could descry the RAM/RAM initial check and comparing with a good one from MAME,  ‘CHARACTER RAM’, ‘VRAM 1’  and ‘VRAM 2’ were apparently reported as bad:

this gave me troubles on PIN8 when compared with a good reference chip.Testing it out-of-circuit confirmed it:

Replacing it cleared the VRAM 1 and 2 error but still CHARACTER RAM was reported as bad: 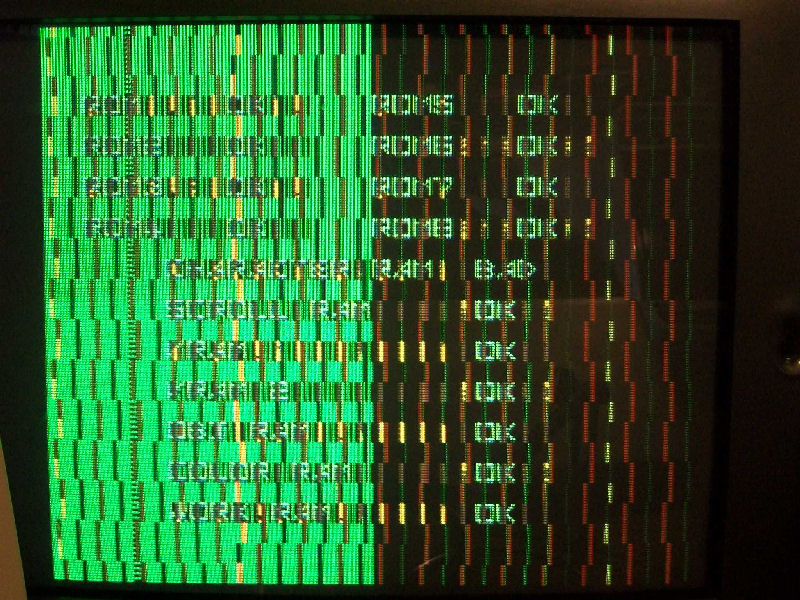 Character RAMs are eight 4416 DRAMs on the VIDEO board.Probing them I found that the three ones @2A, 2B and 4A had two DATA output lines stuck high while all address line were toggling properly.Once desoldered I tested them out-of-circuit and they failed miserably.Replacing them cleared the error on startup:

Finally I could pass the RAM/ROM TEST and enter into the game but clearly there was more work to do on.As you can see from pictures above screen was greeenish symptom that blue color was wrong.This color is digitally generated from this part of circuit: 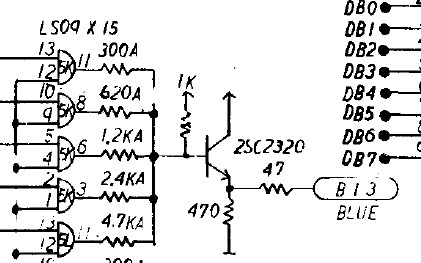 So I probed the 74LS09 @5K with my logic comparator which gave me troubles on all its outputs.It failed once tested out-of-circuit:

Object RAMs are sixteen 4164 and probing them revelead that three of them (@2G-2H-6H) had stuck DATA output (PIN14).They were bad tested out-of-circuit:

But sadly this improved sprites a little as you can see: 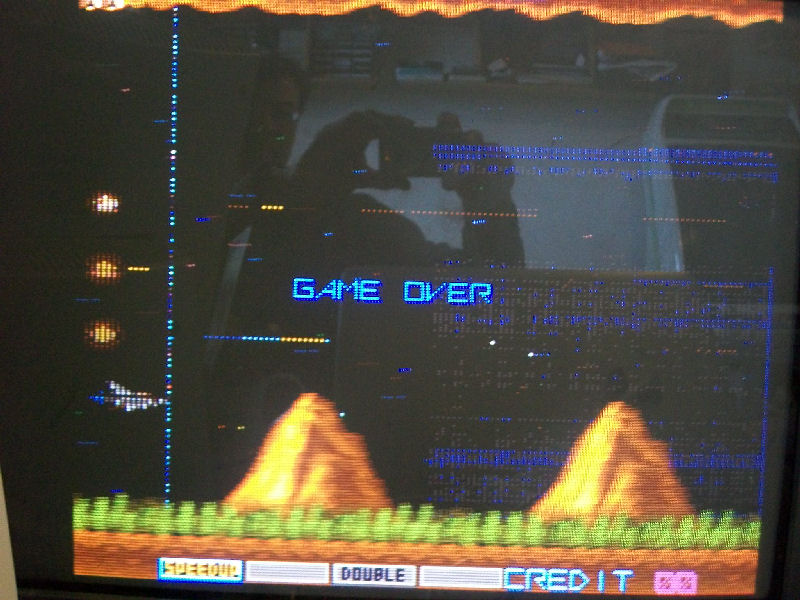 So I went again to probe object RAMs and found that all write enable lines were stuck high!There are two WR lines and each one is shared by eight DRAM.With the help of schematics I traced them back to a 74LS244 @13G which had some stuck outputs: 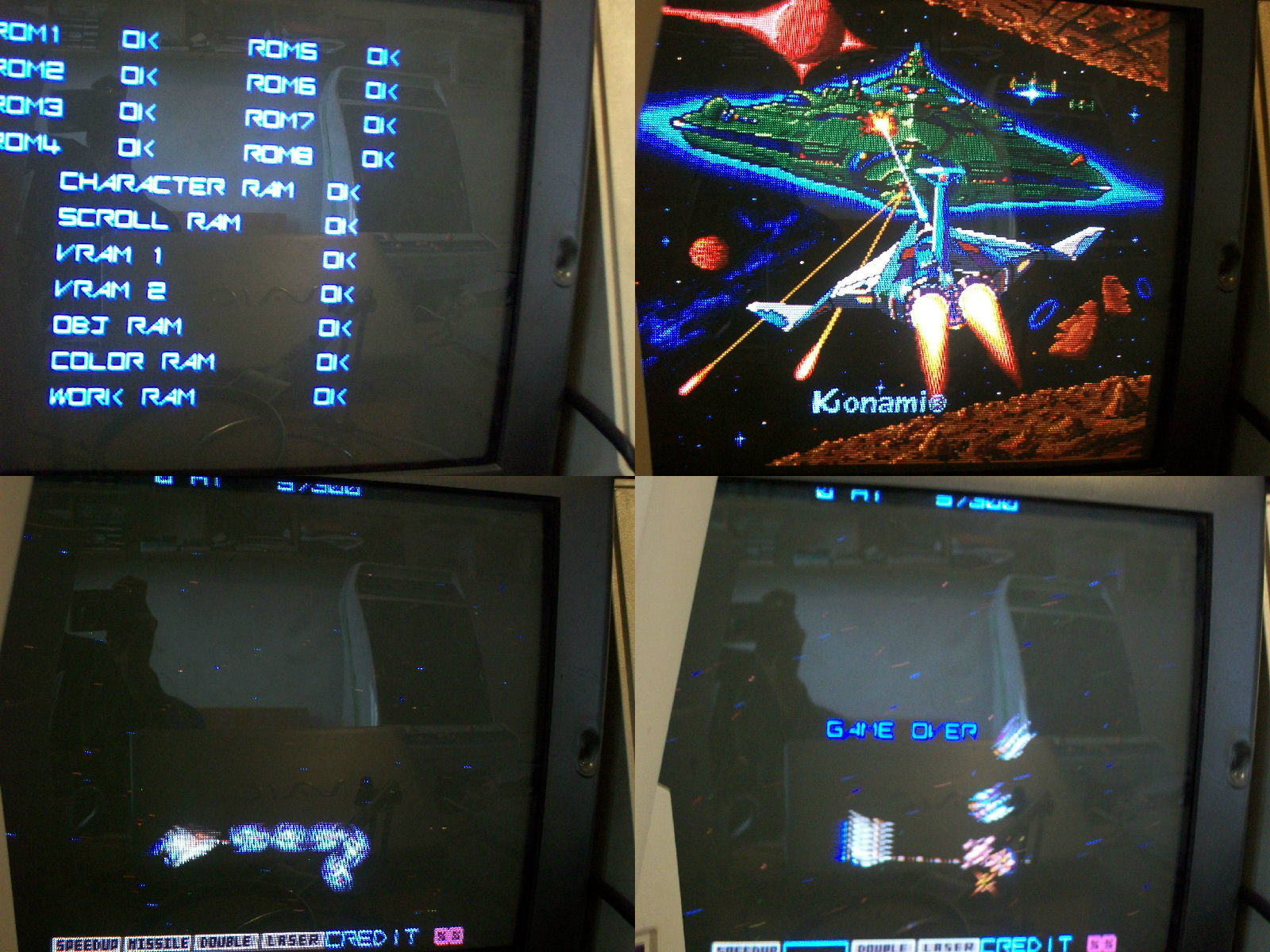 Graphics were perfect now game has no sound and two inputs were stuck as confirmed by I/O TEST: 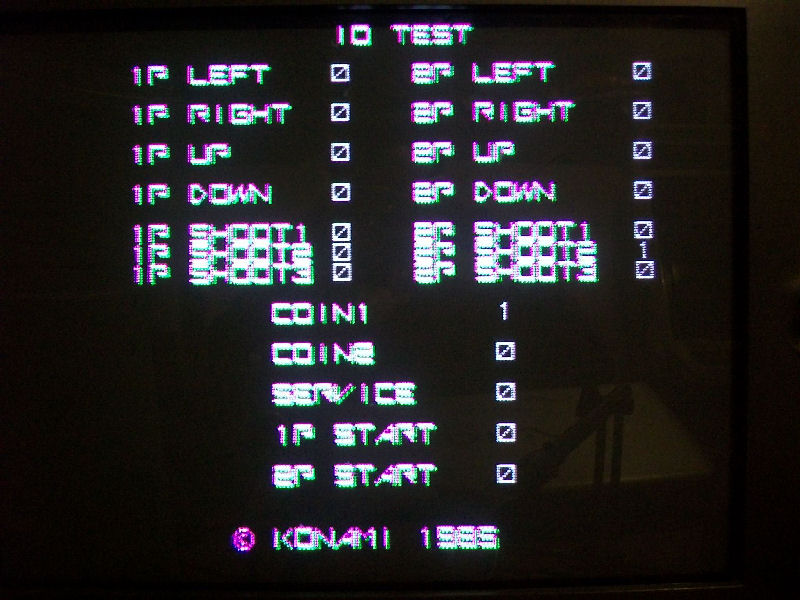 Looking at schematics I traced COIN1 back to a NEC PS2401 optocoupler @2H, piggy backing it cleared the fault so I replaced it.Piggybacking the one @2E for 2P SHOOT2 didn’t fix anything so fault was elsewhere .Between JAMMA edge inputs pin and PS2401 optocoupler there are some protection diodes (1S1588 type): 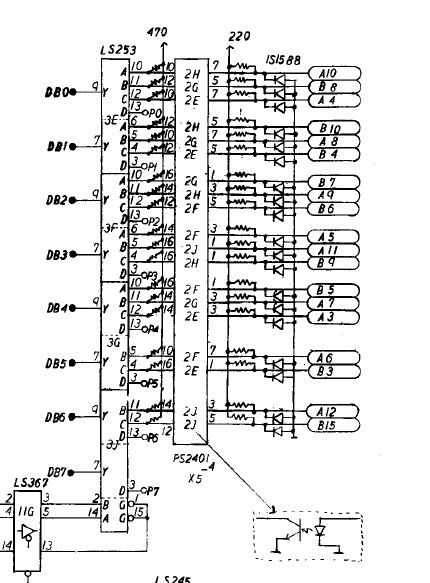 Probing the one @D1 connected to the 2P SHOOT2 revelead it was almost short-circuited as it showed a forward voltage drop of few mV compared to a good one:

Replacing it and inputs were all correctly working: 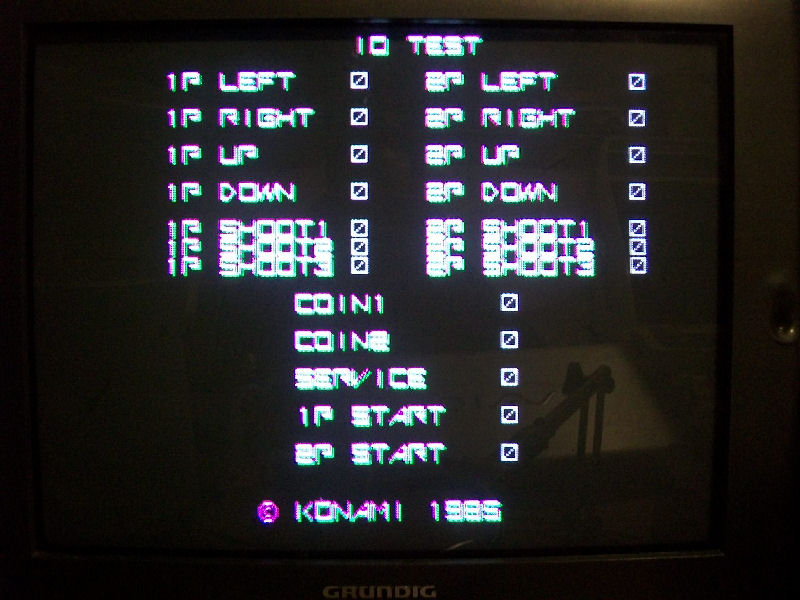 Lastly : the lack of sound.Probing the digital audio circuitry I noticed that Z80 and two AY-3-8910 sound generator were missing clock and this is  generated by a 74LS367 @11G on CPU board:

Comparing and testing it out-of-circuit confirmed it was bad:

But still had no sound at all.So I went to probe the analog section.Diverting the input of the LA4460 amp to an external amplifier I could hear sound so I replaced it.But some music tracks were clearly missing.From MAME source: sound is generated by a Konami SCC ‘005289″ ,a two channel sound generator indeed, each channel gets its waveform from a prom (4 bits wide).Address lines A0-A4 of the prom run to the 005289, giving 32 bytes per waveform. Address lines A5-A7 of the prom run to PA5-PA7 of the AY8910 control port A, giving 8 different waveforms.PA0-PA3 of the AY8910 control volume.

Just a quick note : all the TTL replaced were by Fujitsu manifacturer.