Another Rainbow Islands PCB to repair.

This, like the previous repair (#7) showed a solid white screen, however, if left alone for about 30 seconds I would get the following displayed; 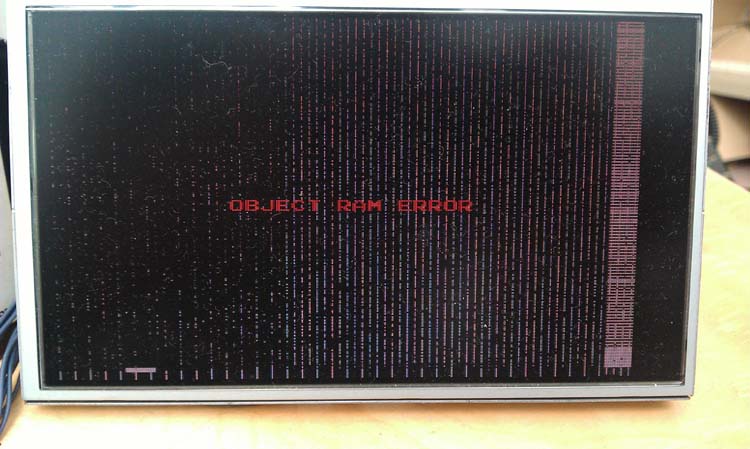 The next day, the PCB was dead again, just showing another solid white screen.  Probing around PCB at the logic, eventually I came back to the object RAM and found that another had failed at location IC51.  This was then replaced, and the PCB sprang back to life but now with issues.  Colours were missing or wrong on the display.

You can just see from my blurry picture that the RAINBOW PROJECT screen is all wrong, no blue background and the colours are missing.  Only the first two letters on each row have a colour (green and grey); 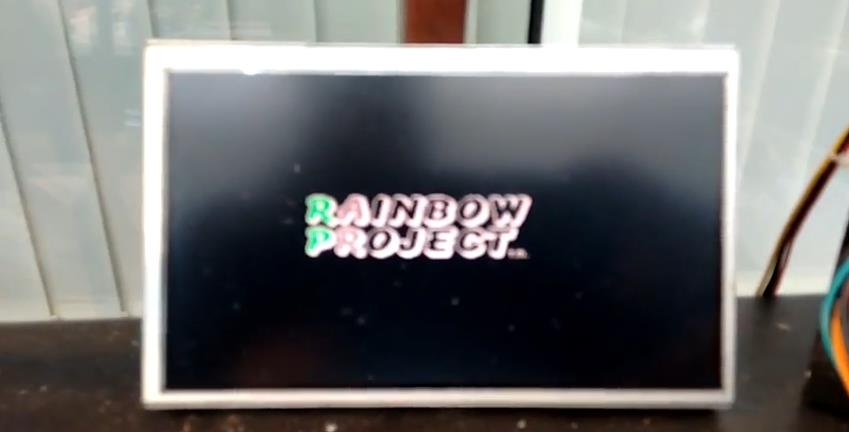 Here, interestingly, the 1UP and 2UP are white, should be green (1UP) and blue (2UP).  Also, the HIGH SCORE and TAITO logo should be red.  The Rainbow Islands logo looks intact, but the colours are solid and not rotating like they should; 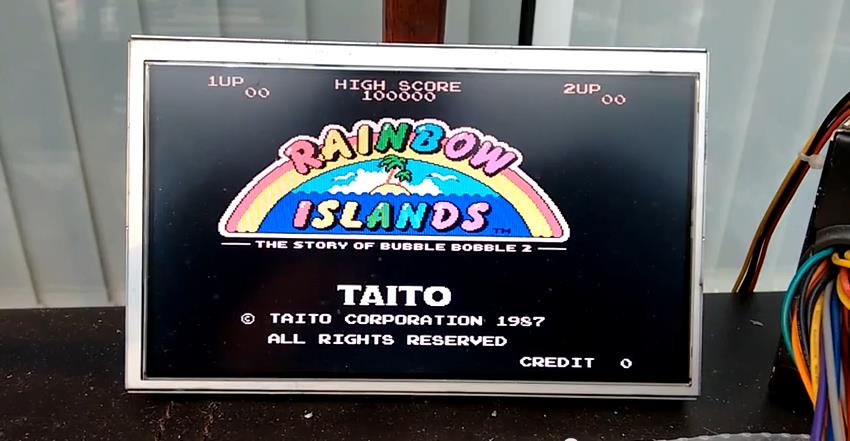 The MAP screen has not escaped either, most of the colours are gone; 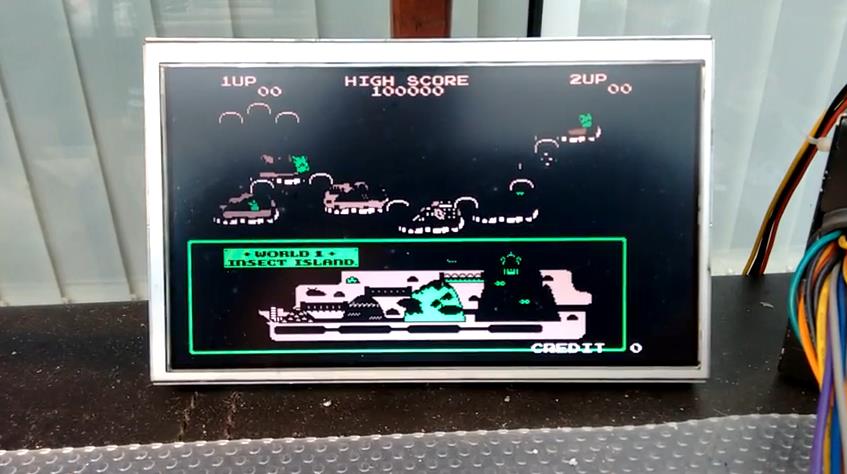 The actual game has suffered too.  It’s hard to tell, but everything is there and perfectly formed, just missing colour so either appears corrupted or simply missing; 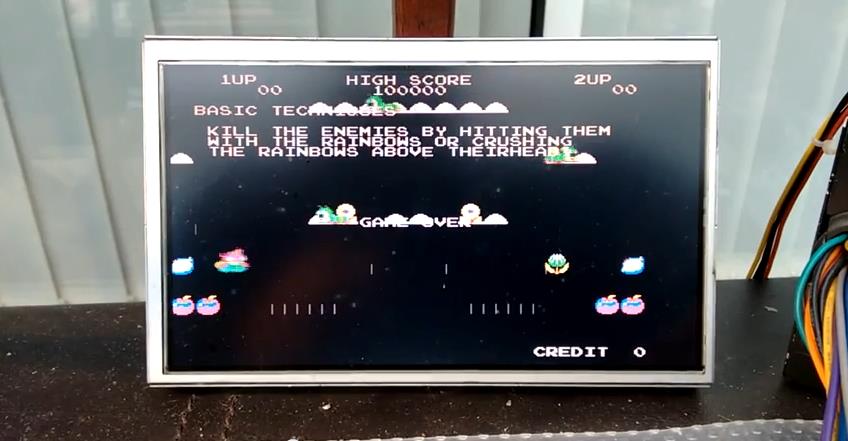 Not even the TEST CARD escaped; 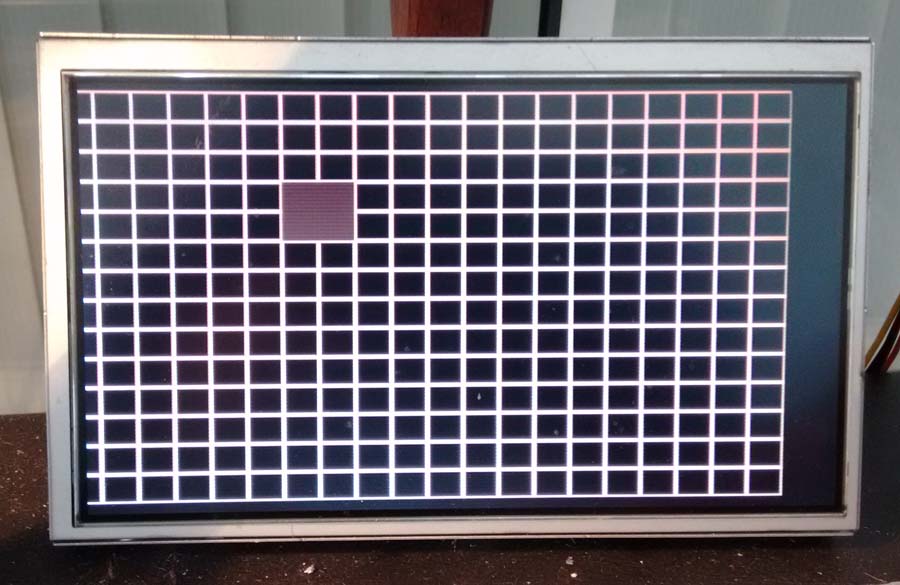 I have already ruled out the TC0070 RGB SIP module as being the cause as the colours are there, just not in the right places.

While I was probing around the board, things got worse, now the sprites have broken up; 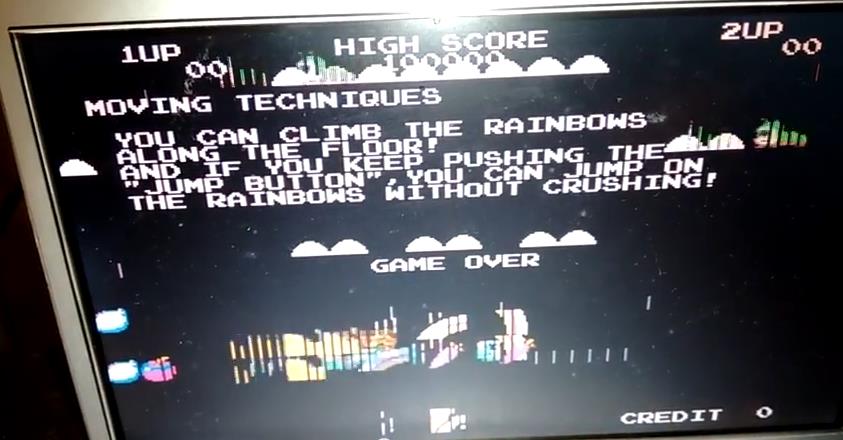 Eventually, the PCB stopped running again and I got this message on the display; 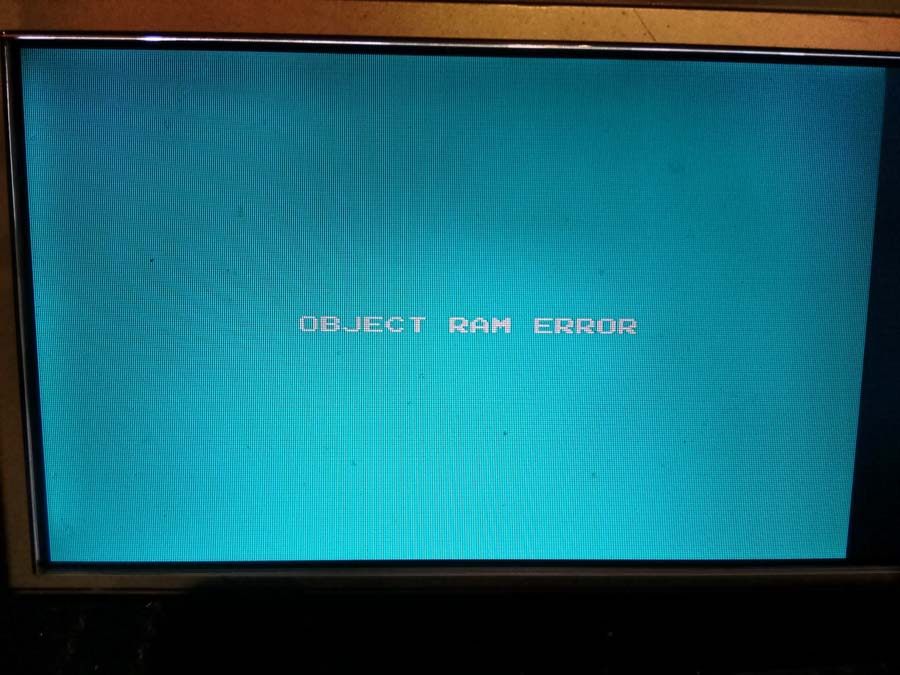 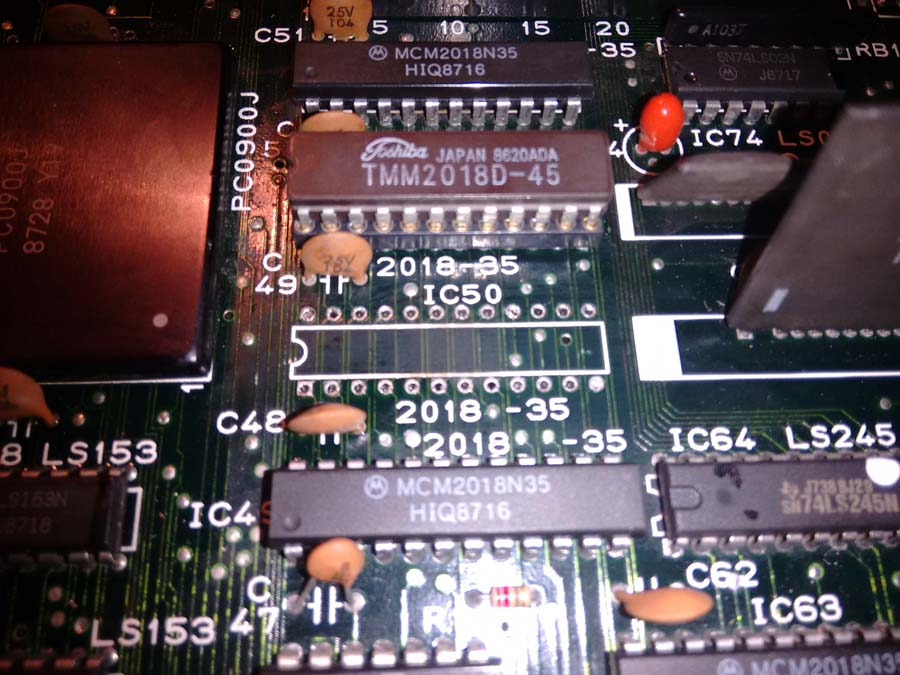 So this was replaced and I now got this display; 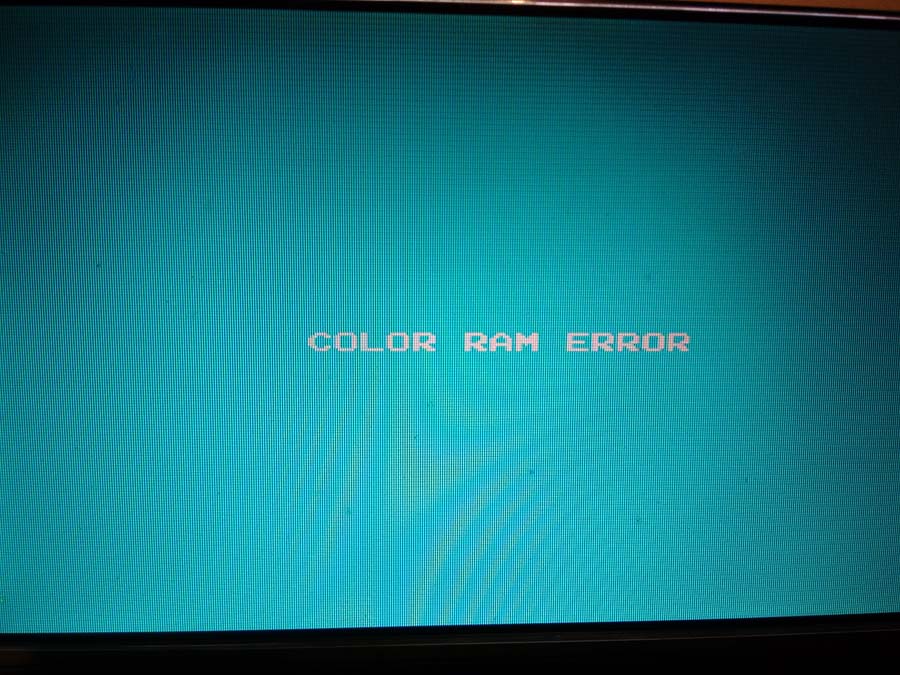 At first glance I thought it was still the same message, OBJECT RAM ERROR, but then noticed this time it was COLOR RAM ERROR.

So, I replaced the bad colour 2018 (6116) RAM at location IC70 and the PCB was running again, with the sprites now intact again. 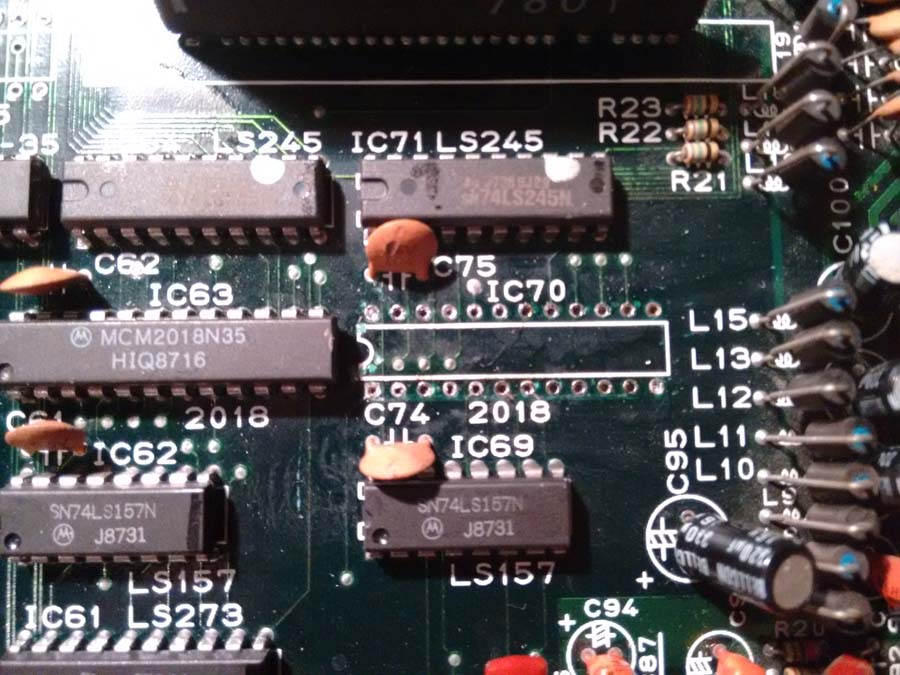 At this stage, I was becoming a bit frustrated with the failing RAM, so I bit the bullet and just replaced them all so I can concentrate on the colour problem; 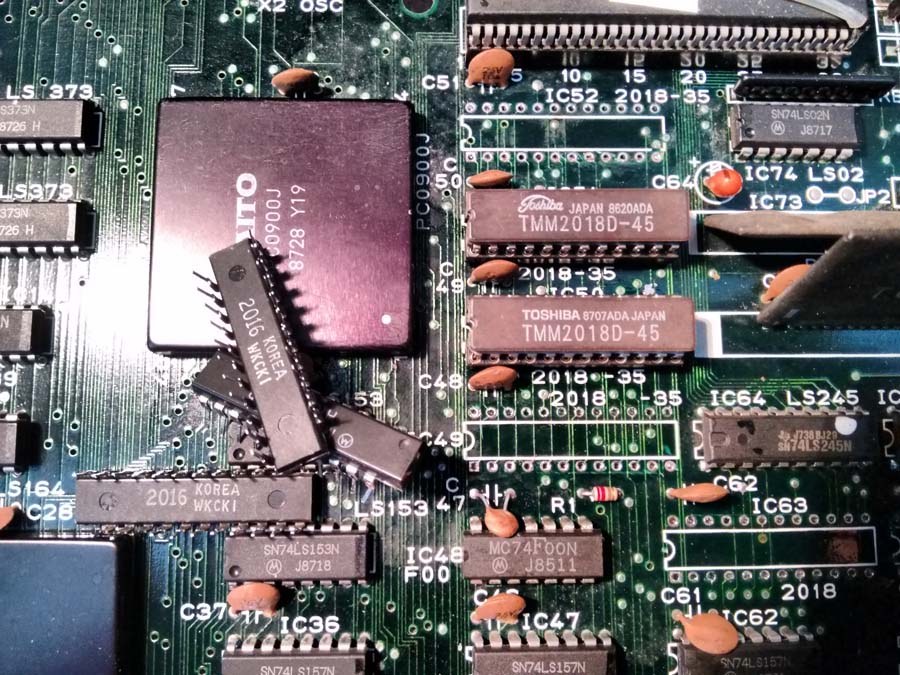 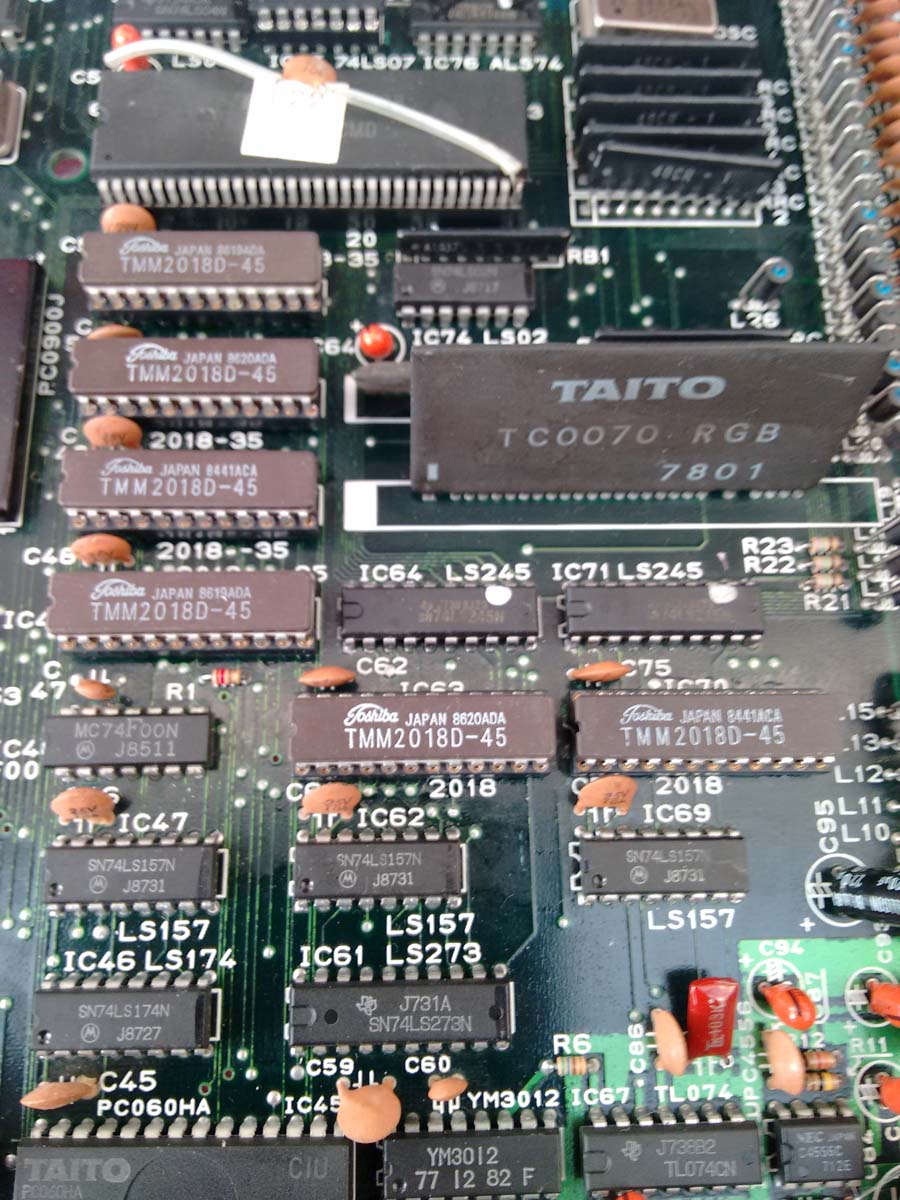 It was a good move because now at least the PCB was running stable.

I was starting to get a bit fed up looking for the colour problem, and Caius very kindly offered me some help.  Infact, he was a massive help and told me exactly where to look for the problem.

With help from Caius, eventually I found that pin 15 of the 74LS157 at IC36 was floating (using my logic probe).  This is the IC’s enable line, and it should have been tied to VCC (through the orange disc 104 capacitor).

It was then I notice the burned/damaged trace going to the orange disc 104 capacitor; 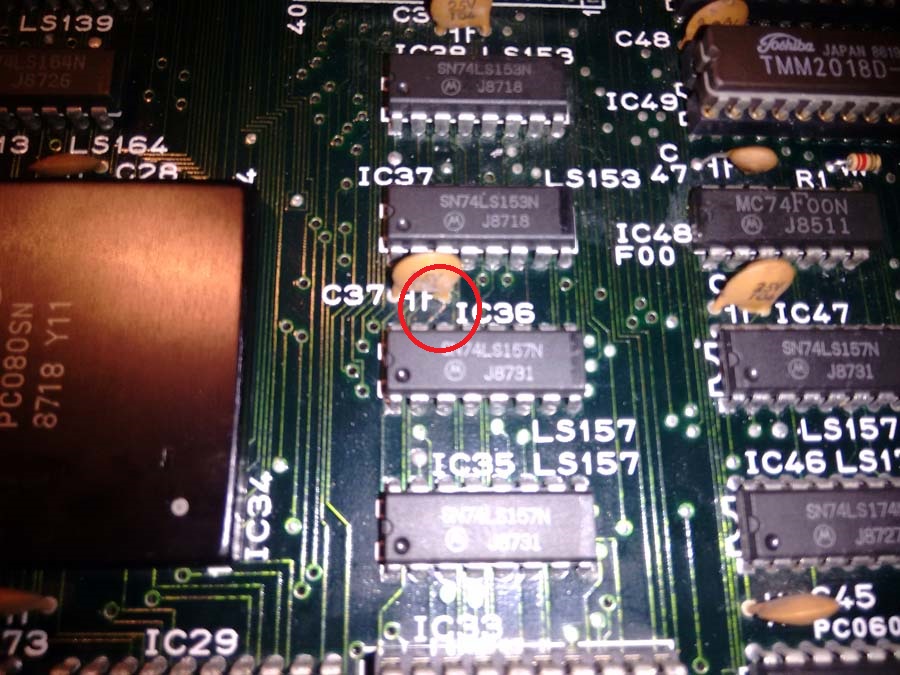 Very odd place to find a damaged trace, certainly not very accessible.  I had no idea how it was damaged until Caius mentioned it has happened to him also.  Like Caius said, I must have accidently fried the trace by short-circuiting it during my in-circuit testing.

I do recall the PC PSU for my Supergun shutting down due to a short when I was probing the PCB.

So, using kynar wire I patched the damaged trace from underneath; 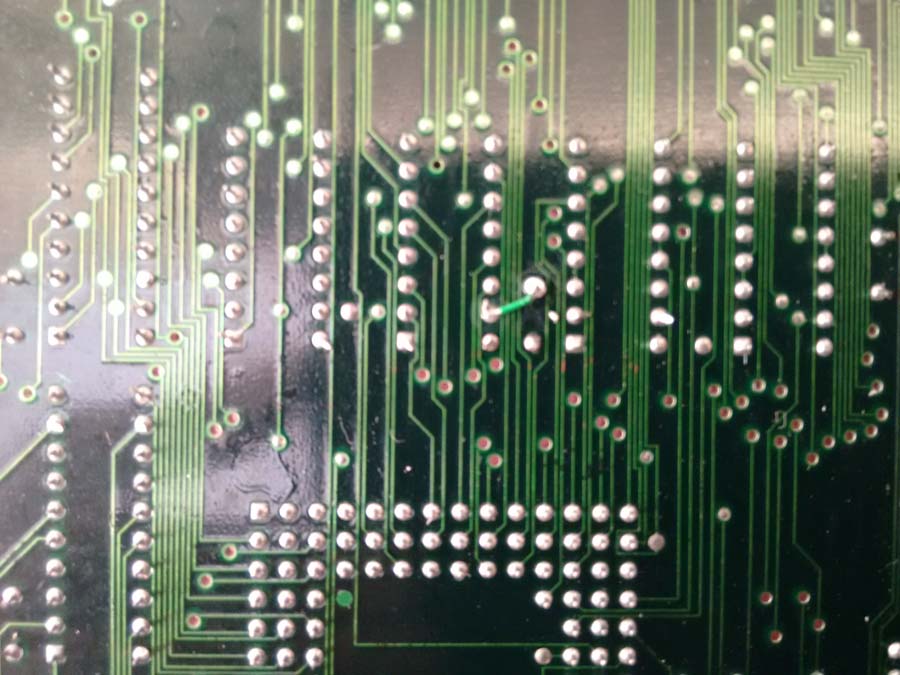 The game’s display was now 100% restored; 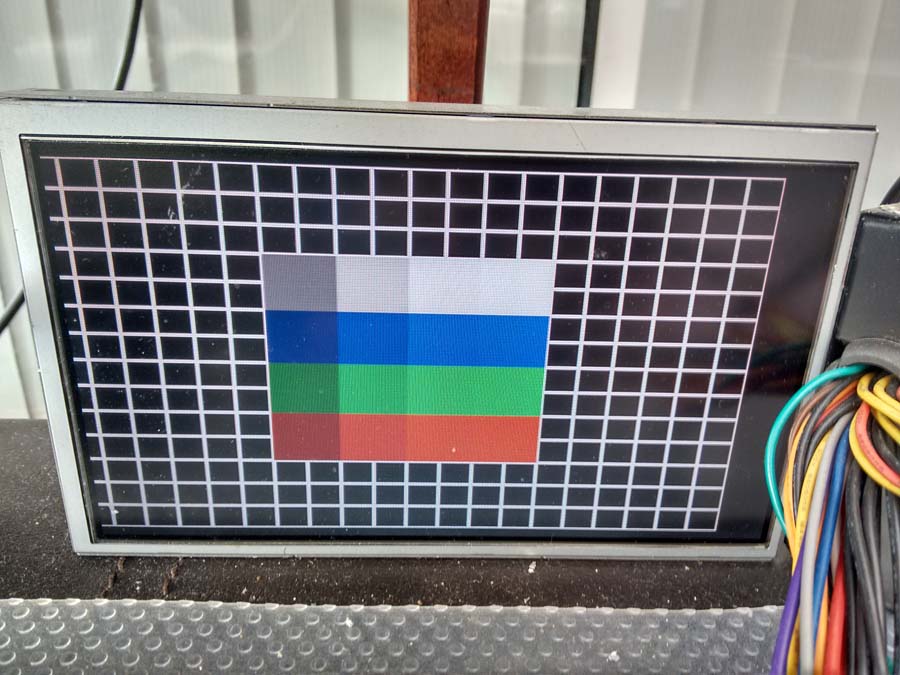 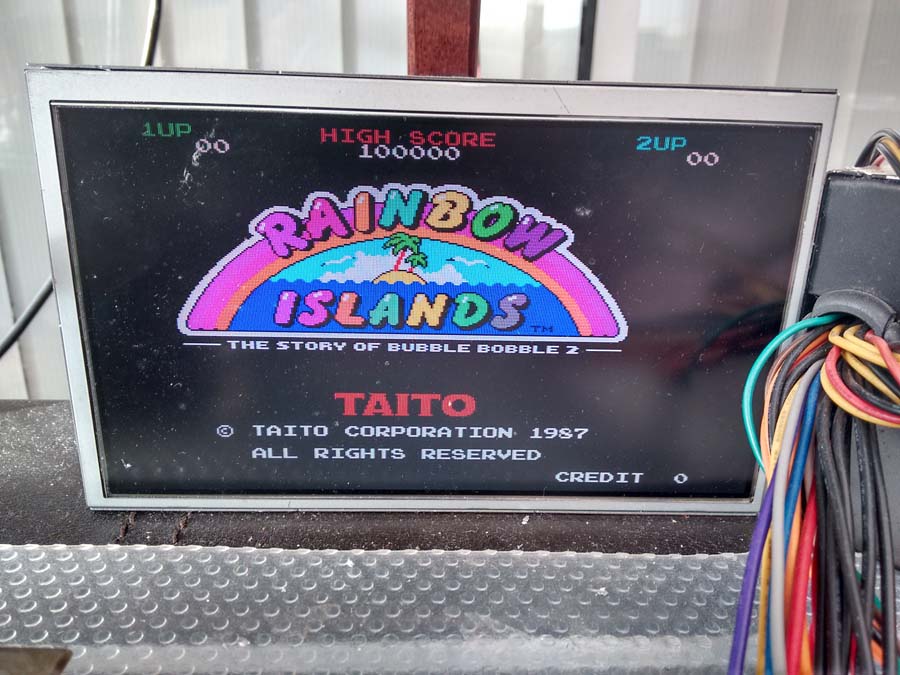 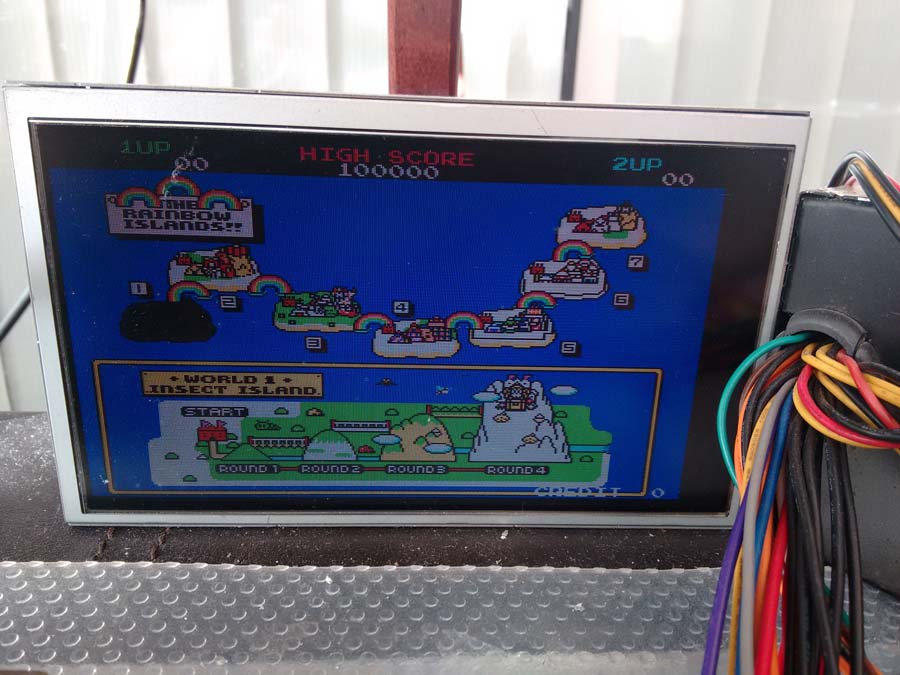 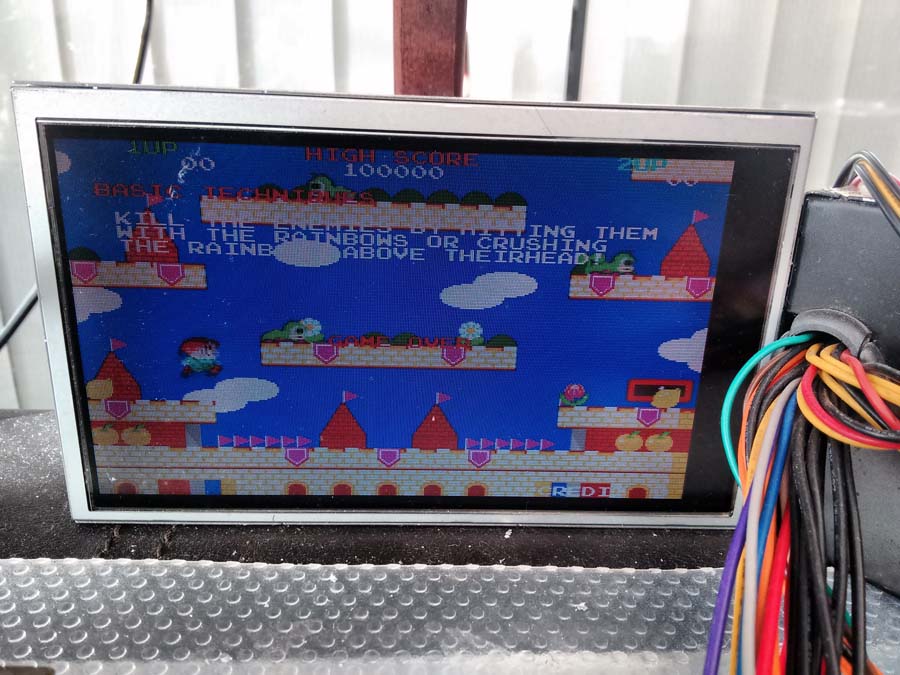 Massive thanks to Caius, whom without I would not have solved this and just given up.