I recently picked up an Apple //e enhanced computer to repair and to relive some memories. Due to the machine’s age ( especially because of the power supply )  I was mindful not to power up the machine and risk damage to the logic board.

I disassembled the power supply and wasn’t at all surprised at what I saw based on what I’ve read, there was no way I was powering this thing on and taking any chances although this was a very high quality power supply compared to power supplies of the same era. This is an astec AA11042C, this version is rated 240v and there were actually two different types available in the Apple ii line. I checked the fuse which looked fine and tested OK with my DMM.

I then removed all electrolytic capacitors and recapped the entire board including the two Rifa filter caps which can fail spectacularly and spill brown coloured goo everywhere. Some capacitors revealed scorch marks on the PCB after removal. The 47uf 250v capacitors from the high voltage side looked fine but were way off spec.

2 bad electrolytic capacitors pulled from the low voltage/output side 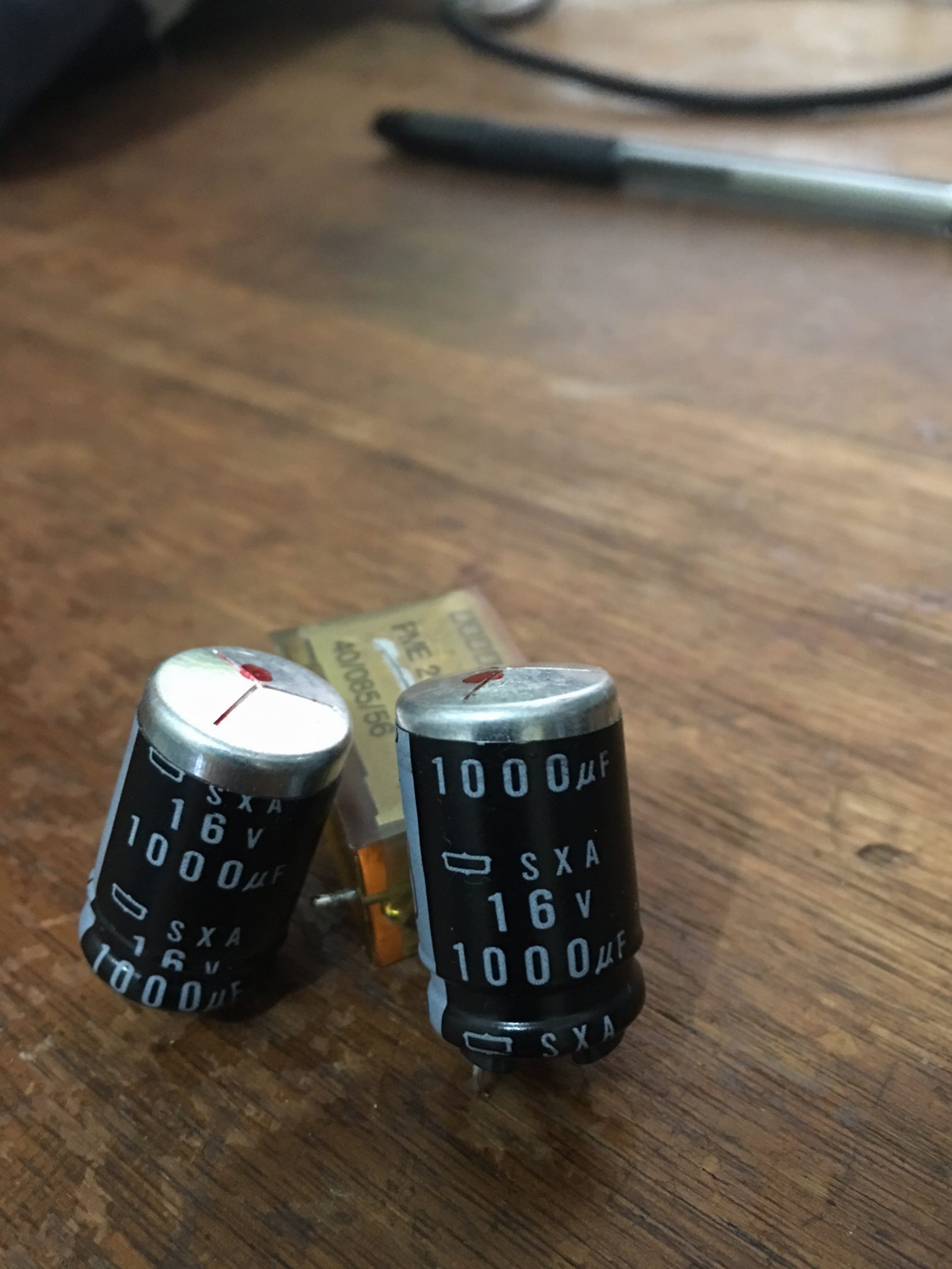 Apparently moisture gets inside the cracks and the cap explodes. Not taking any chances, it has to go. 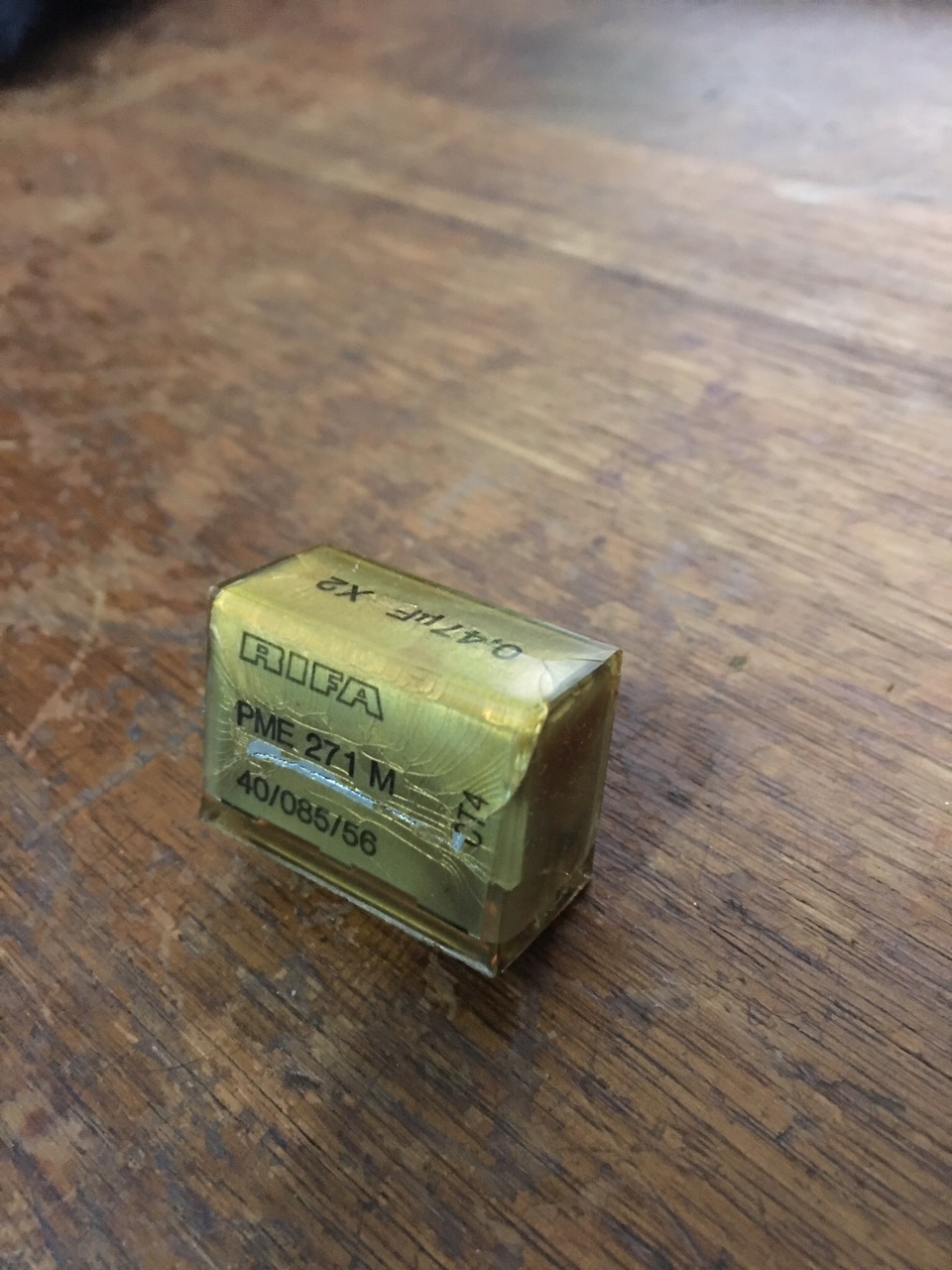 I ended up installing two filter caps made by Suntan, this brand doesn’t have the best reputation in the world but I can swap those for higher quality caps once I get the unit functioning. These were all I could find ( the yellow rectangular looking things near the inductor) and I was so desperate. 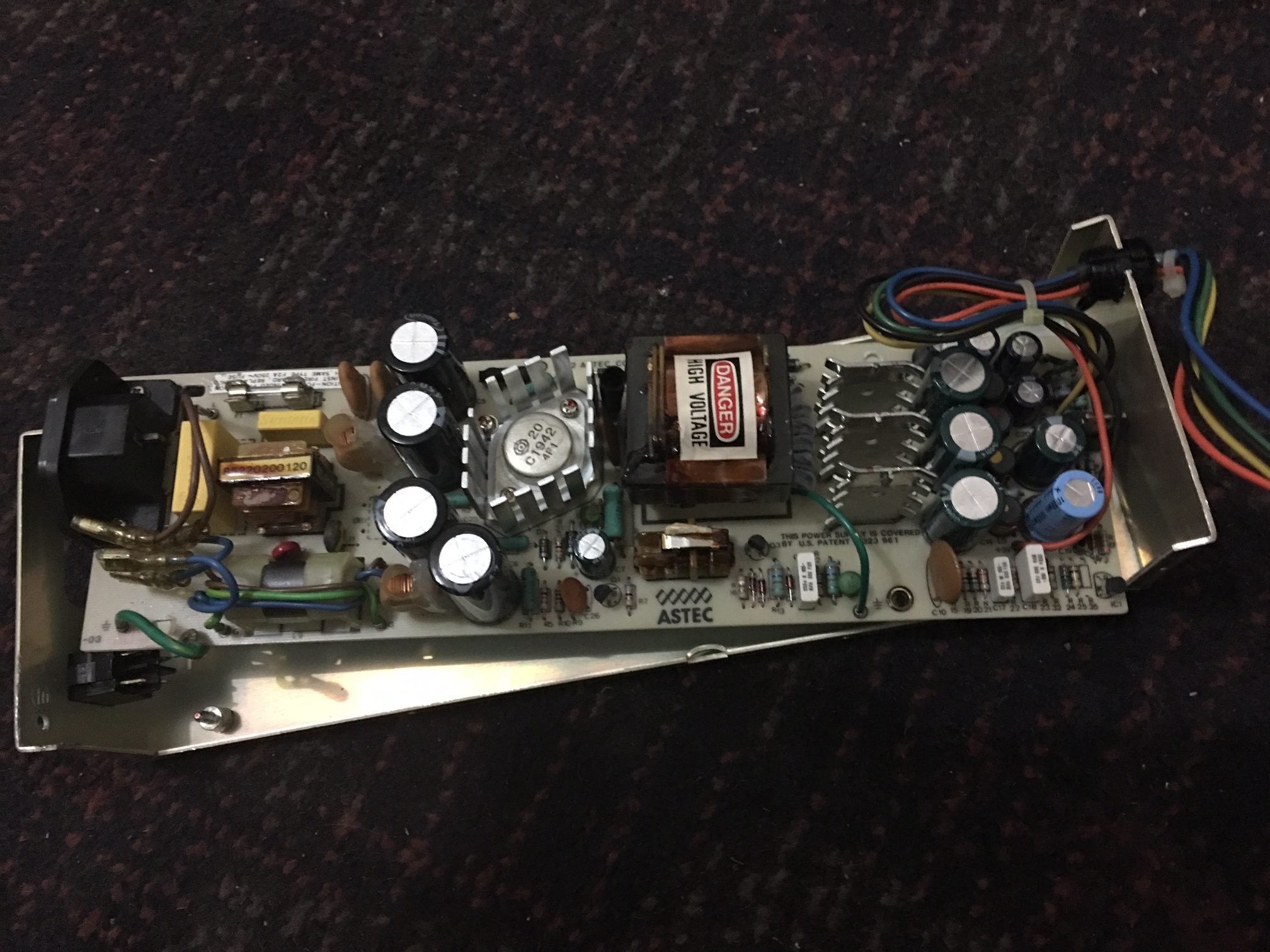 I tested the power supply but quickly found out that like all switching supplies, nothing will happen without a proper load or with a short. With the power supply connected to the Apple, nothing happened which was good in a way because I didn’t see any smoke. If I were taking my chances in the same way with an Atari or Commodore power supply then things might have turned out a little different 🙂

There were no voltages present on the logic board of the Apple //e. This prompted me to look deeper. The bridge rectifier ( @ DB1 ) looked a little cooked or oxidized even though it tested good with my DMM, the issue wasn’t there but I replaced it anyway. 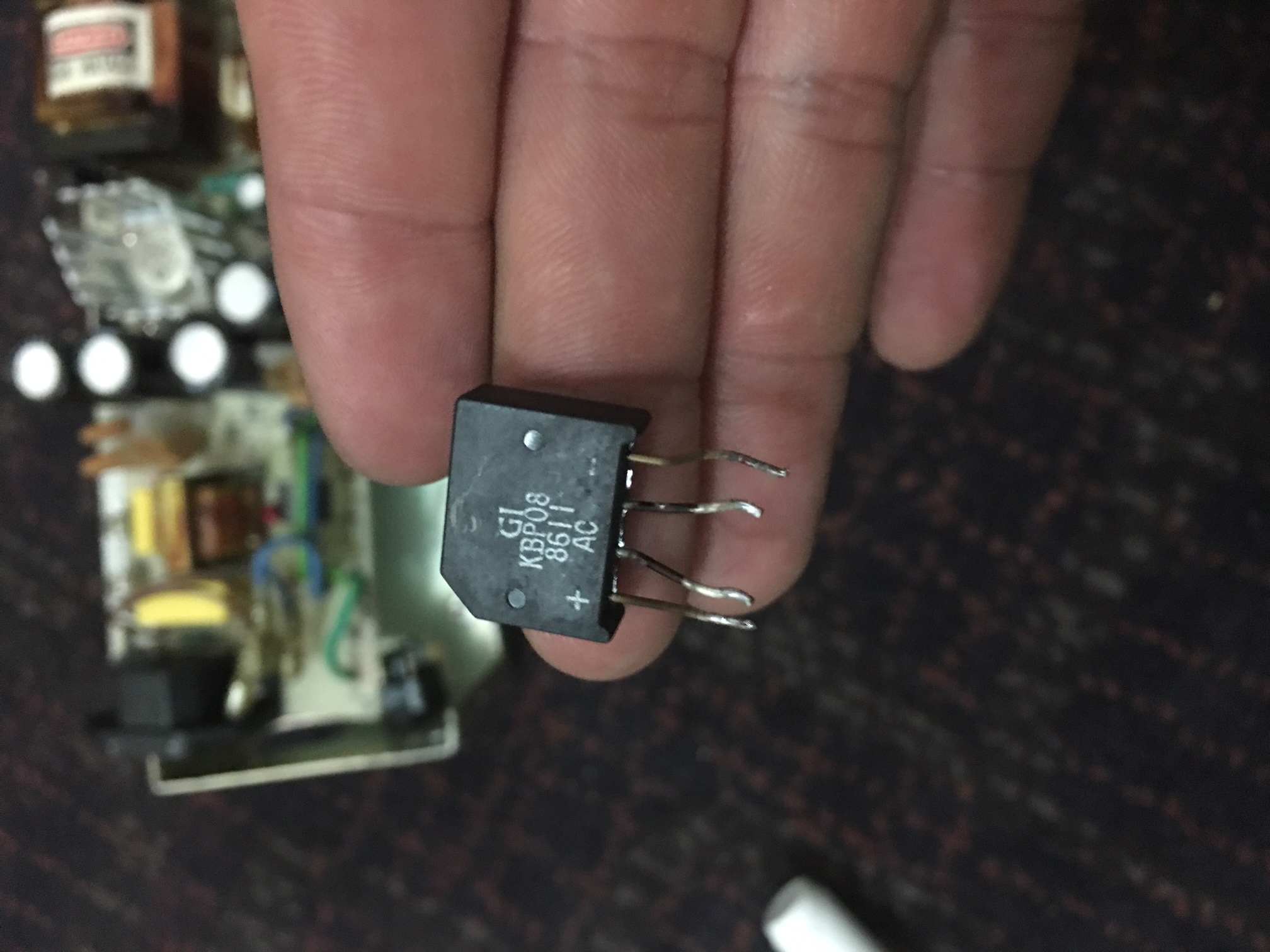 I then started reading a comprehensive troubleshooting guide in the following PDF document.

I ended up removing a bunch of small transistors, the large power transistor,diodes and re-installed them after they checked out fine. I replaced the SCR ( silicon controlled rectifier ) at scr1 as I have no means to test it. The scr1 shutdown transistor at Q4 tested good. This area is also known as the crowbar circuit which disables the power supply if there’s an over-voltage or a surge, this protects any downstream components like the sensitive stuff in your computer from damage.

I was stumped at this point as none of the above actions solved my problem.

I took another closer look at the PCB and found this burn mark circled in yellow. I removed the 2w resistor which still measured 27 ohms out of the circuit. I re-installed it as it was good. 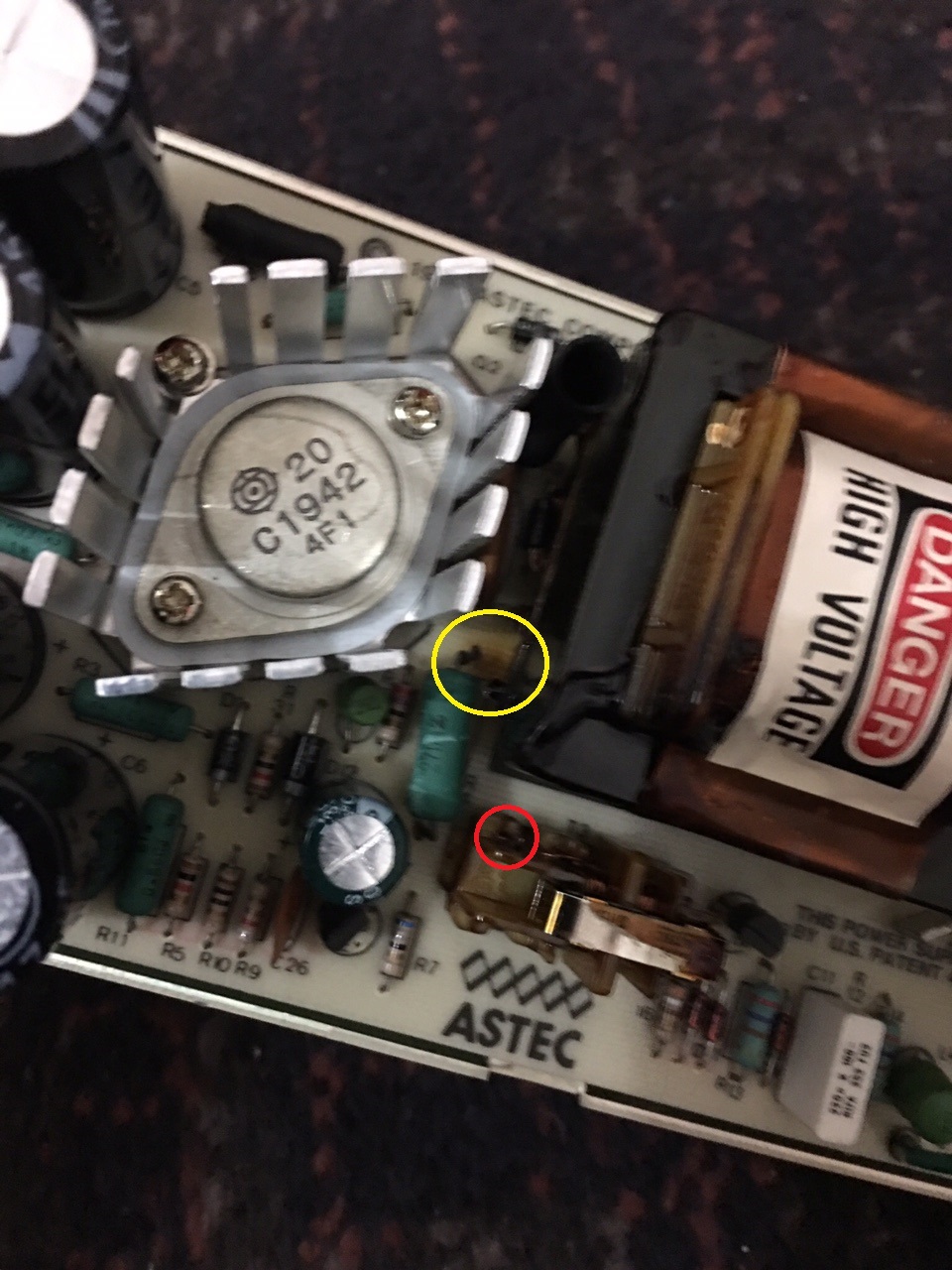 The above link to the document also mentions to check the windings on transformer T2 and T3 ( PWM control isolator )  for continuity. I remove the smaller transformer ( pictured above, adjacent to the astec silkscreen logo on the pcb ) thinking that I’m wasting my time with this but check for continuity anyway.

There are 6 pins on the bottom of the T3 which are soldered to the PCB. There appears to be 3 separate sets of windings but 1 set of windings had no continuity between two of its associated pins. I found a small break in the winding at the bottom of the transformer ( circled in red ) and soldered it to its corresponding pin. If the break was anywhere else then there would be no way of repairing it, I just got lucky I guess.

I re-assemble the power supply and apply power to the computer and presto. The internal speaker beeps at me and the kb power led illuminates. Failures within transformers are relatively rare but I have just proven to myself that its more likely to happen than I originally thought. 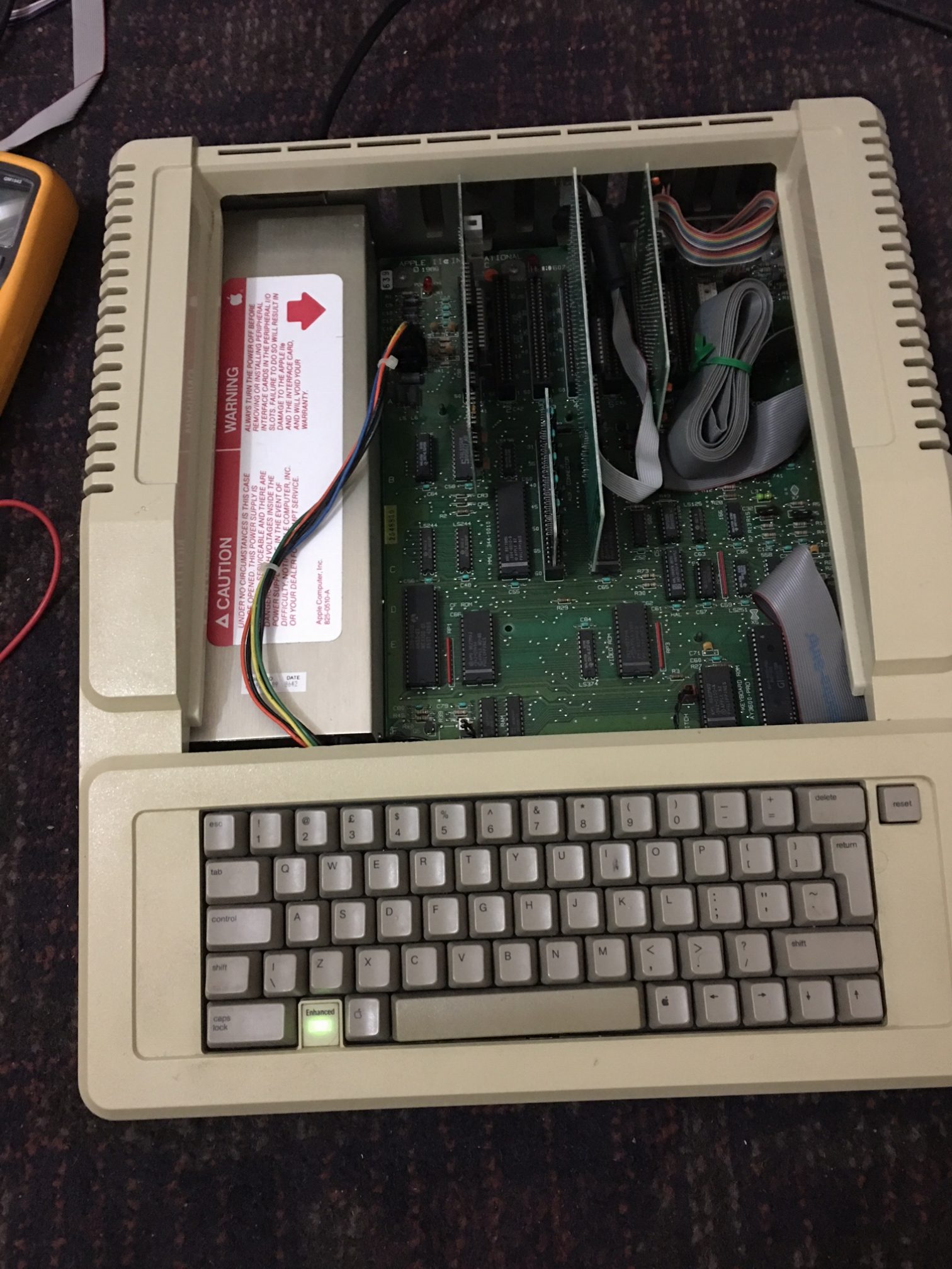 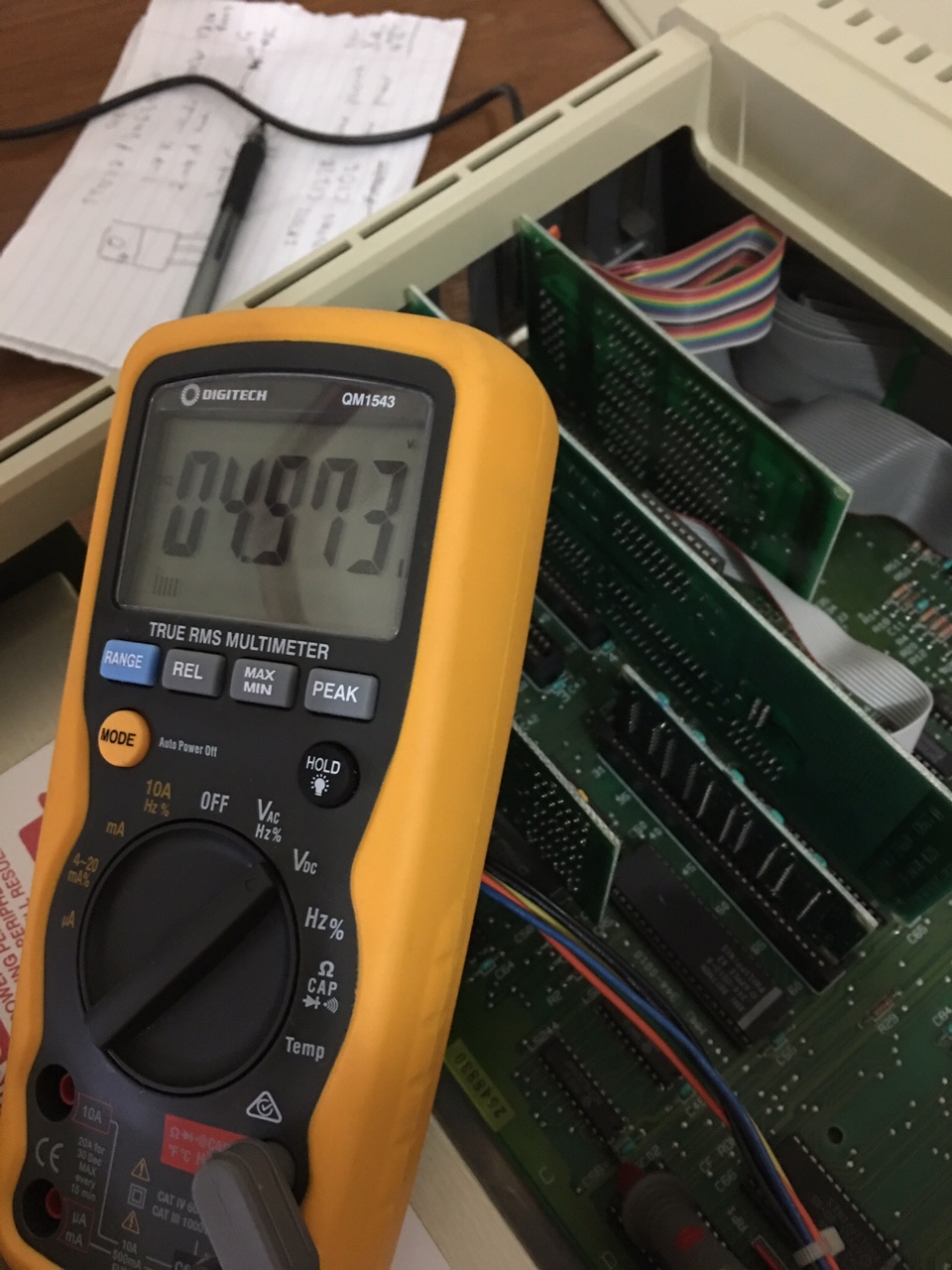 The red led on the logic board is busted, so I replace it with the only one I have on hand and it’s green. 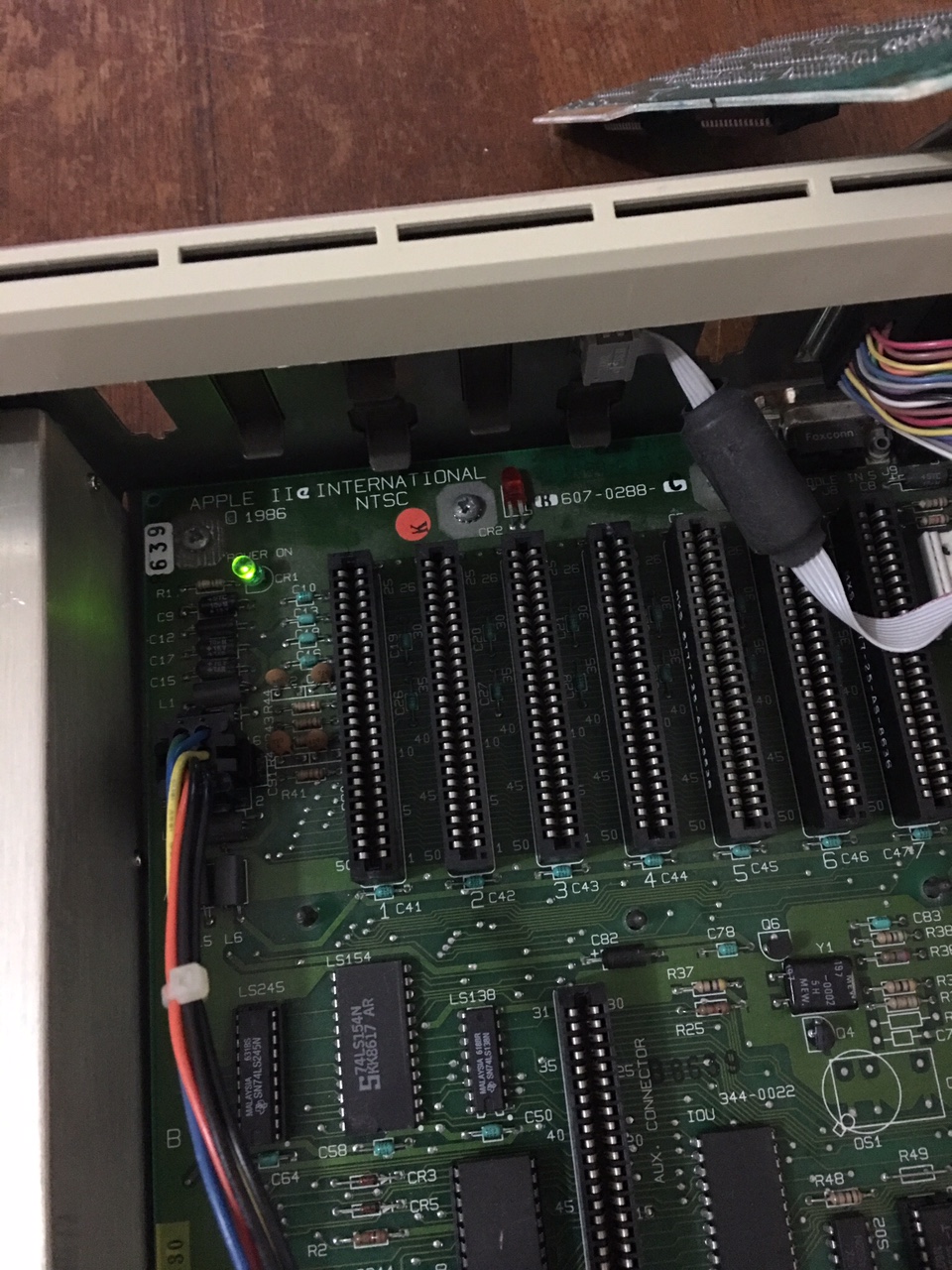 I also accidentally broke off one of the terminals on the a/c switch due to too much tinkering so I replaced it with one that illuminates. I like it better than the old one. 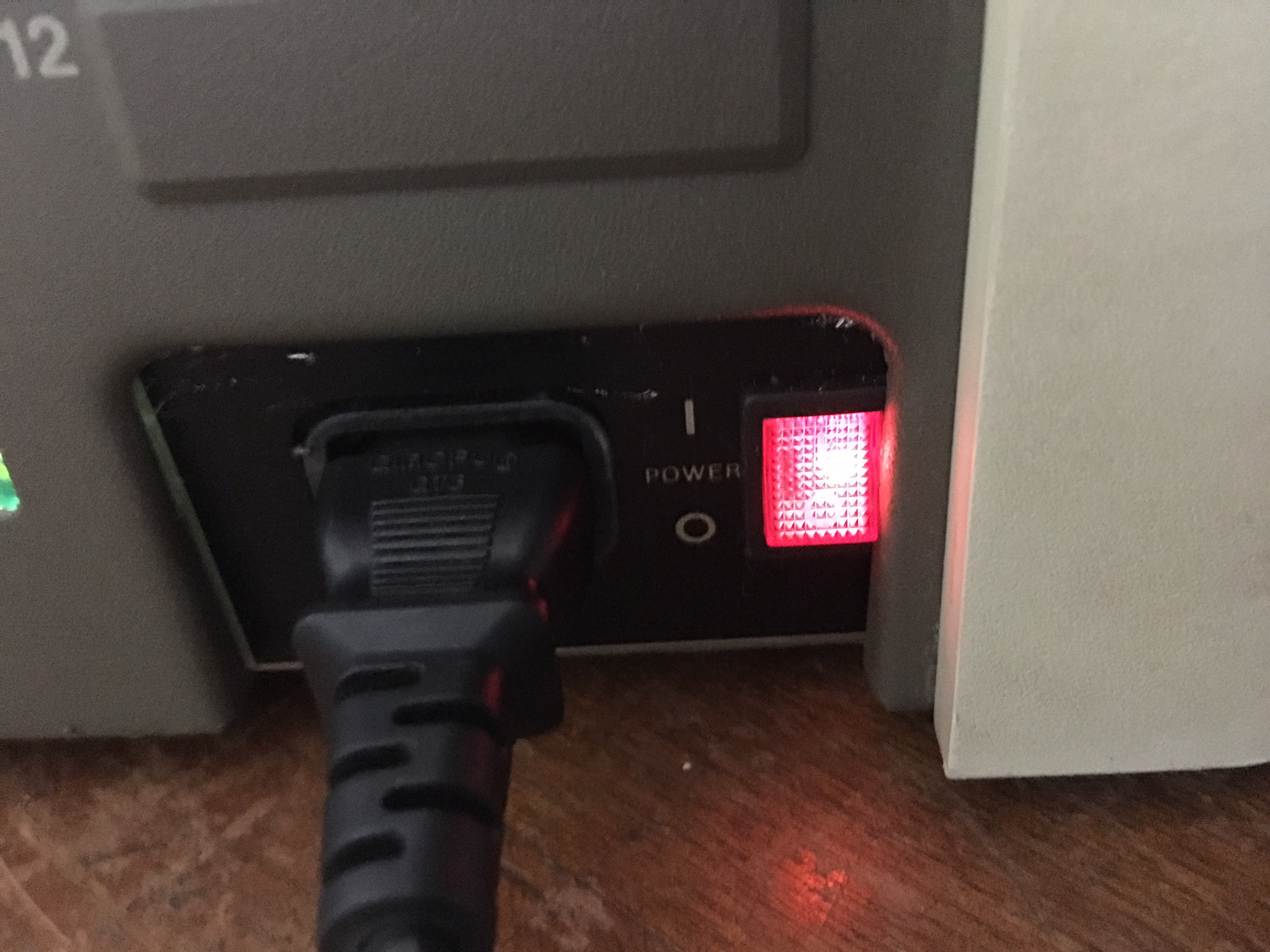 A backup CRT TV hooked up. 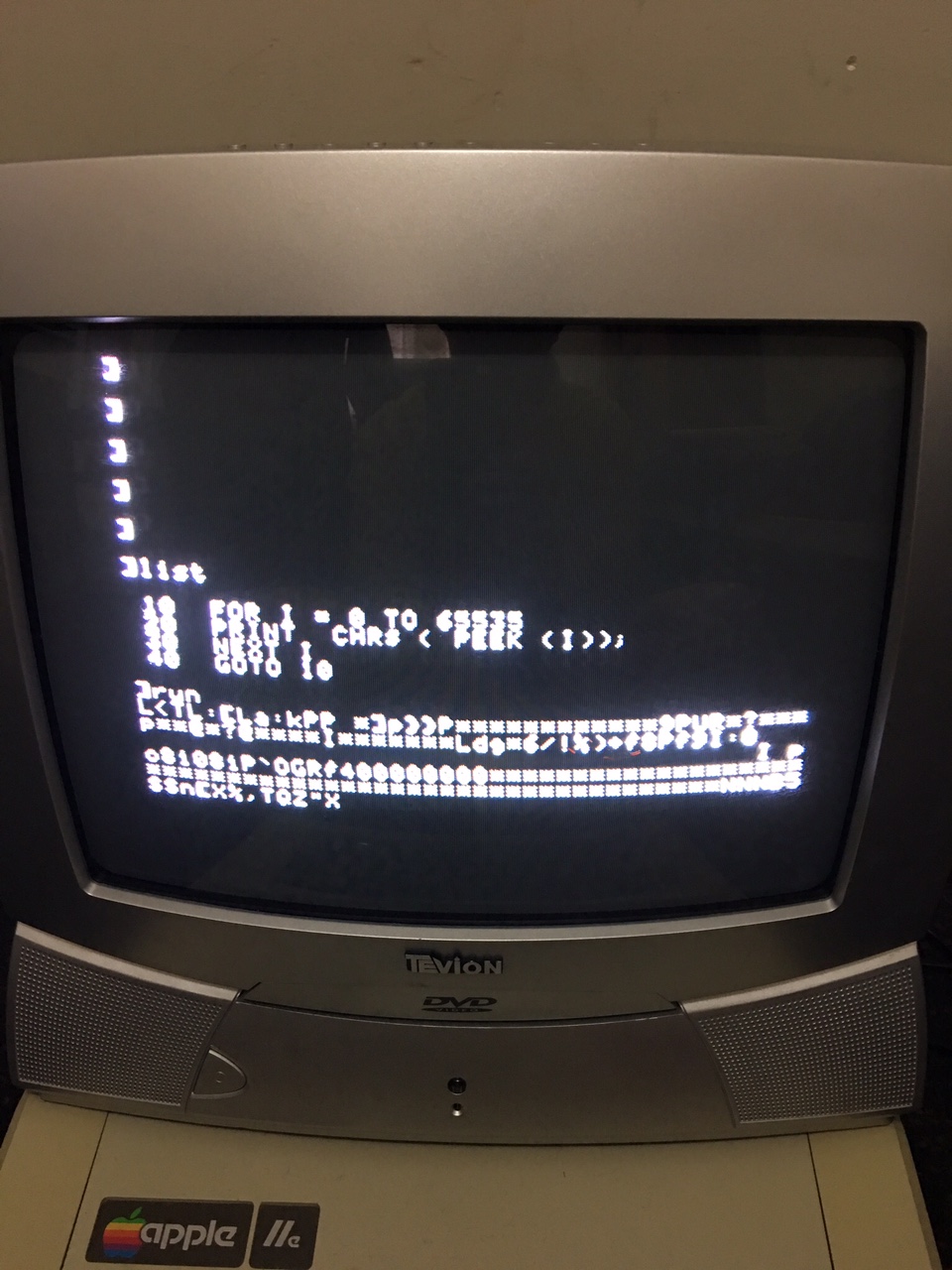 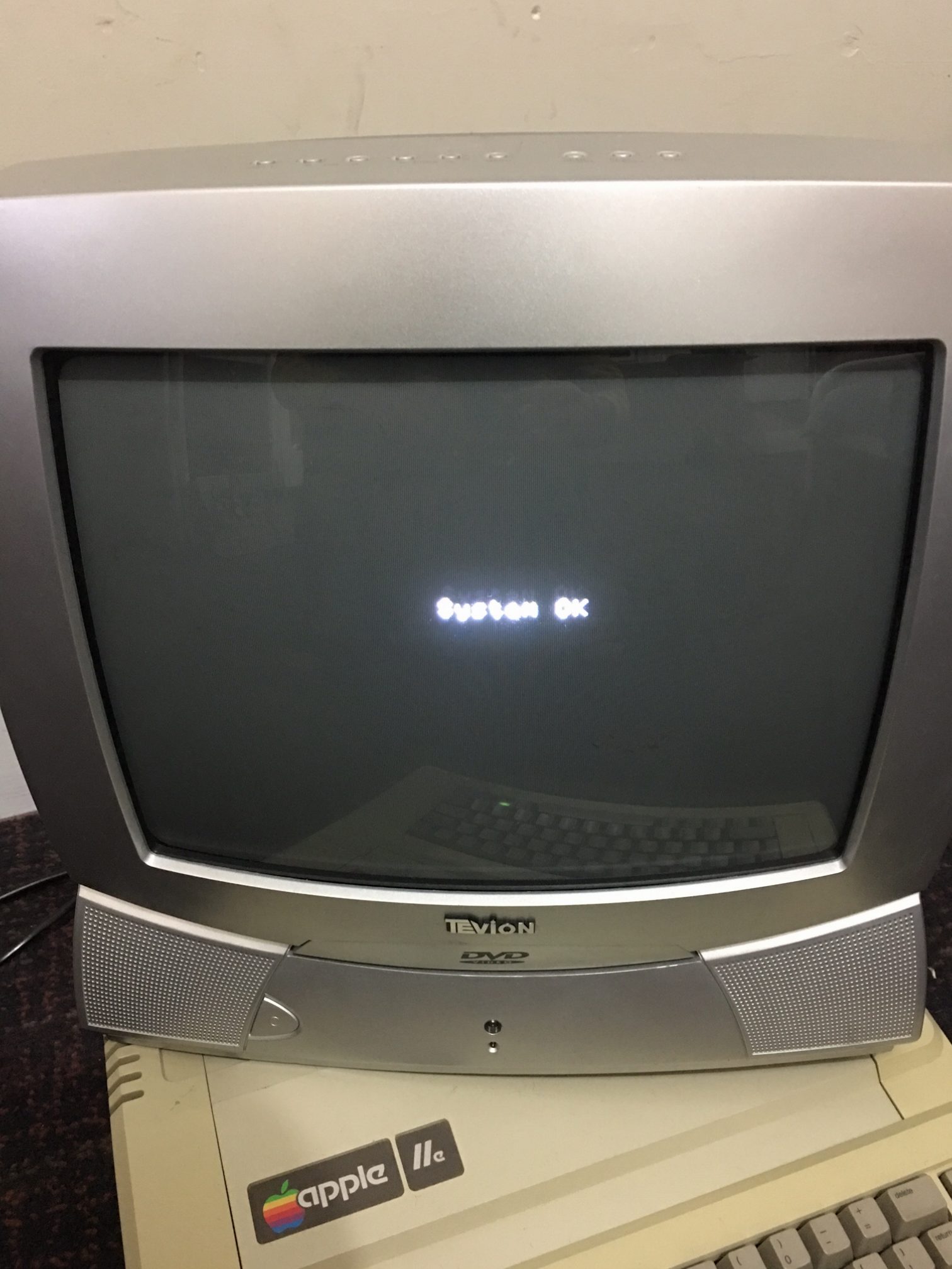 That’s pretty much the end of this repair. I do have some issues with the keyboard which are fairly trivial and I’ll address that later when time permits.