A while back I got my hands on a cheap CPS1 set for Street Fighter 2 CE. The reason it was cheap was that the A board was not working. As we know by now, these A boards are dying quite fast and in some cases the culprit is the Custom CPS-A-01 chip for which there are no know replacements as of yet. 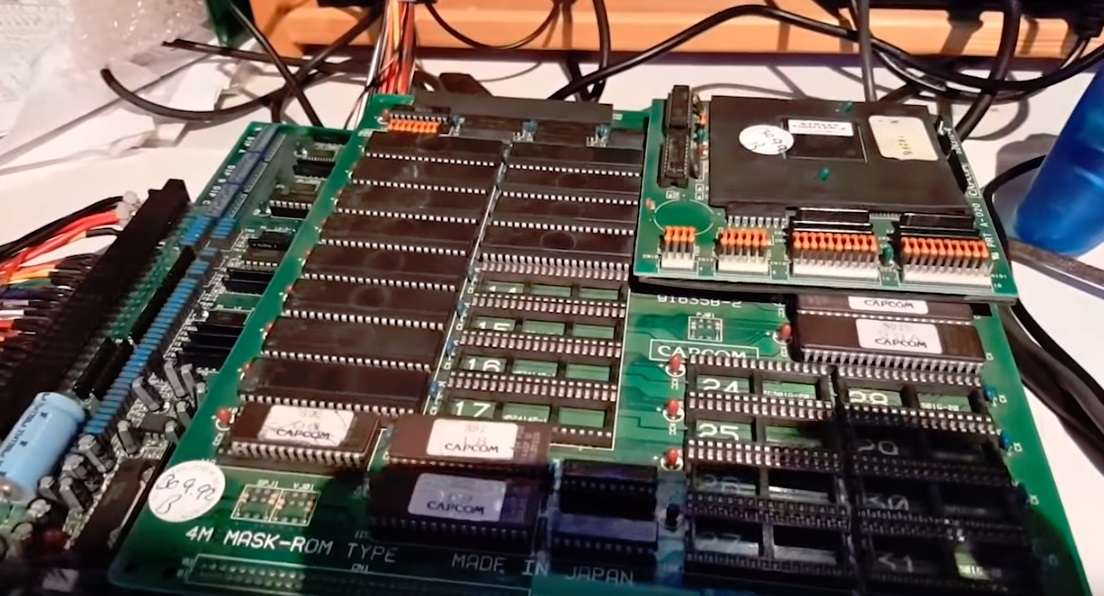 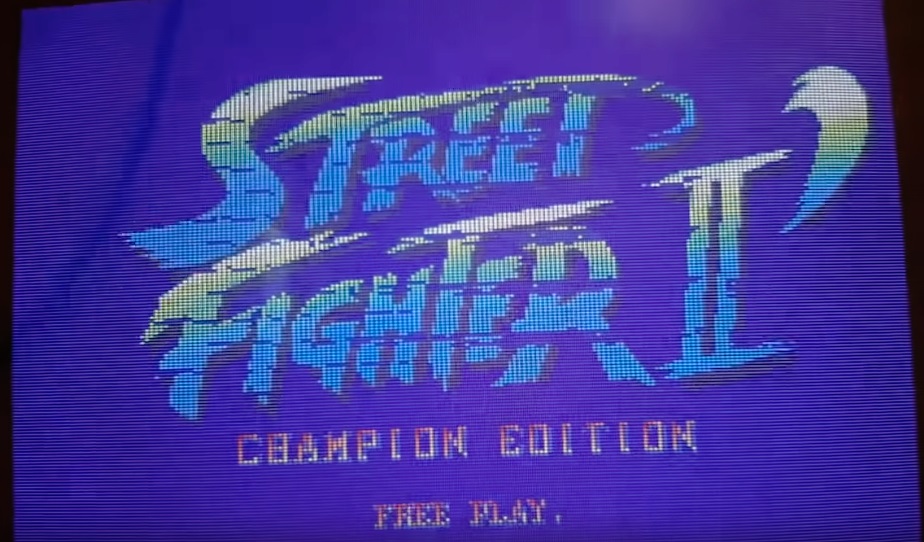 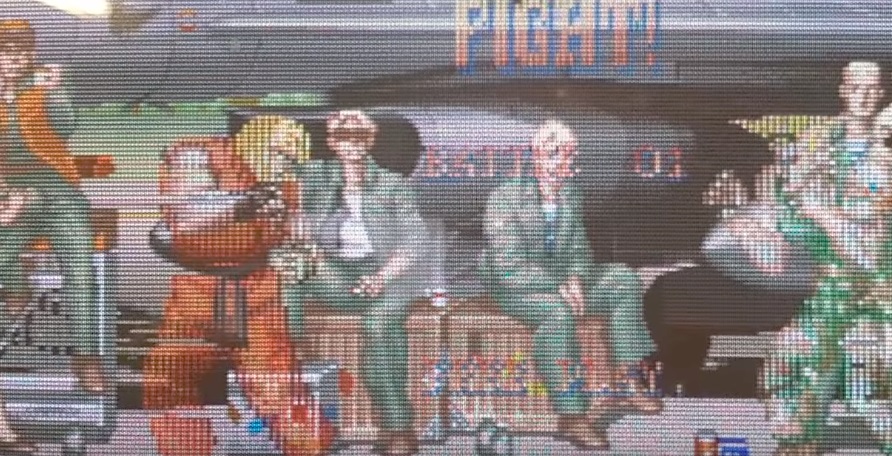 So it seems we’re only getting half the lines in the sprites and , while it’s not visible on a screenshot, the other half is flickering slowly too.

Looking at the schematics we can see the two parallel banks of rams processing each odd/even lines of sprites. These are coming straight out of the CPS-A-01 GPU IC. Let’s check out the DT/OE enable lines or the rams first. 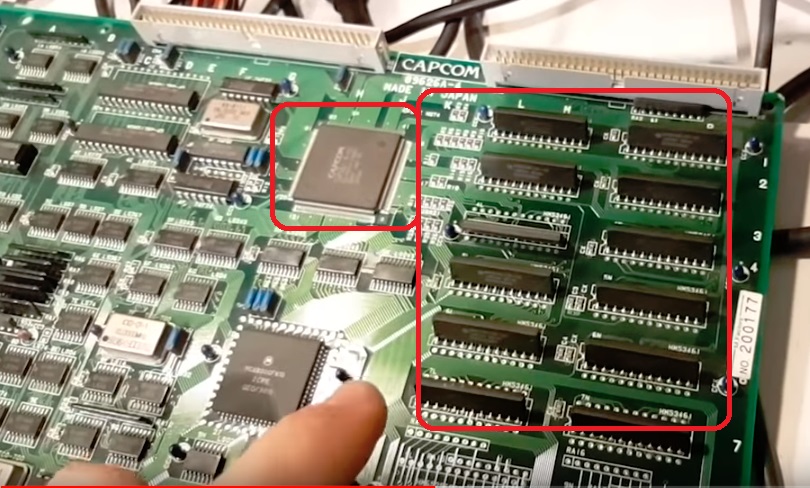 Looking at them in with the scope reveals a couple of issues: 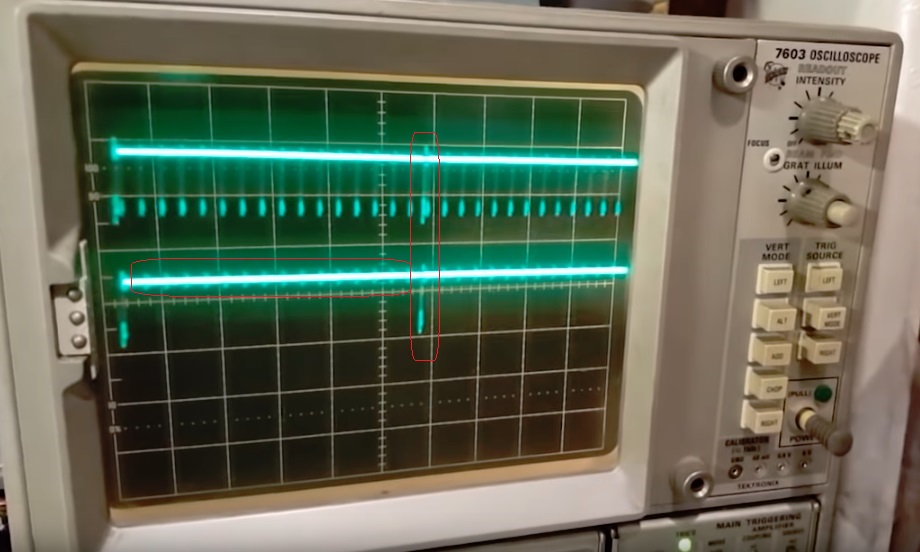 The bottom one is pin 21, and it’s not really toggling apart from that one regular jump, while we can see that the other line is toggling all the time. This is why we’re only seeing half of the sprites: one bank is not being enabled.

The other issue is this jump on both lines which is most likely why the entire sprites flicker regularly.
These are coming from Pin 21 and 47 of the cpsA .
bank A pin 21
bank B pin 47

Tying the enable line of bank B to bank A will restore the sprites but we still have the issue of the flickering sprites… in a nutshell, the CPS-A chip is fried and this A board is toast.

Luckily a viewer of the youtube channel (thanks Kris Ankers!) sent me a spare A & B board. 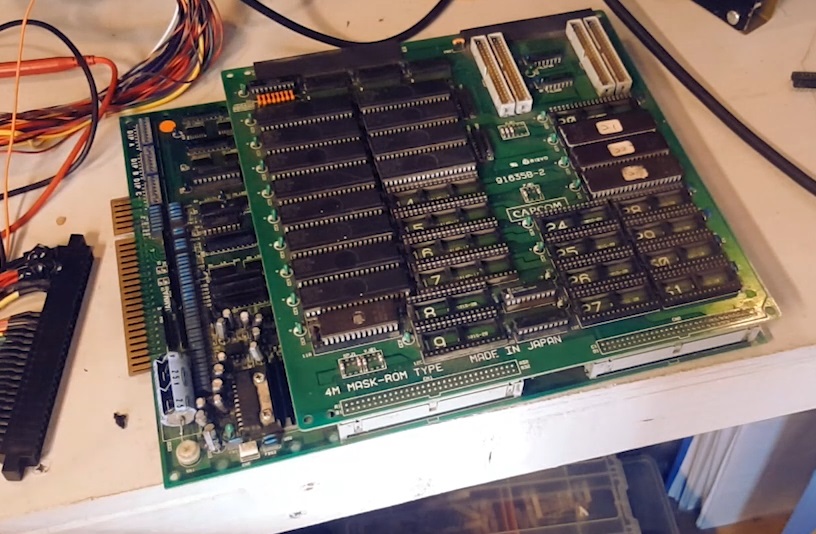 The board is in unknown working state . Checking the few remaining proms it’s another SF2 CE , not that it makes much difference here as we’re only interested in the A board. Let’s replace the A board on my other stack and fire this up 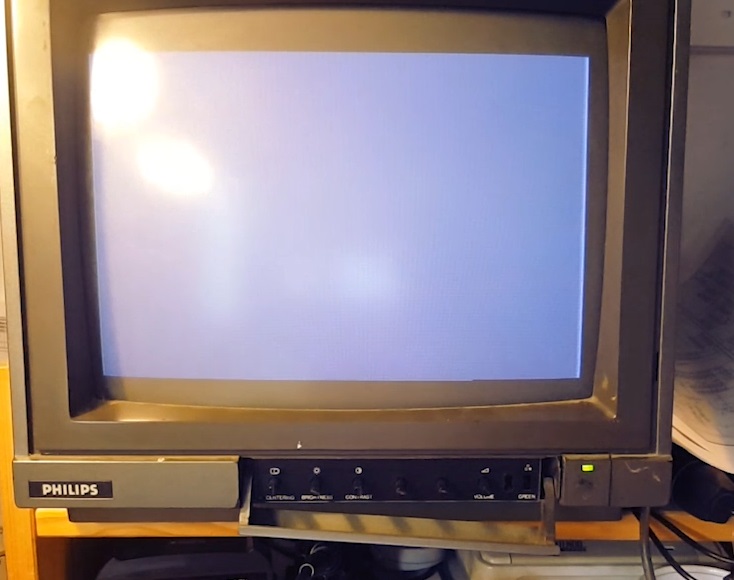 …nothing. board is dead.
A quick visual inspection reveals a few corroded badly corroded sockets on the BUF1 and ROM1 pals. corroded is an understatement here too since the socket were missing legs that had completely disintegrated. 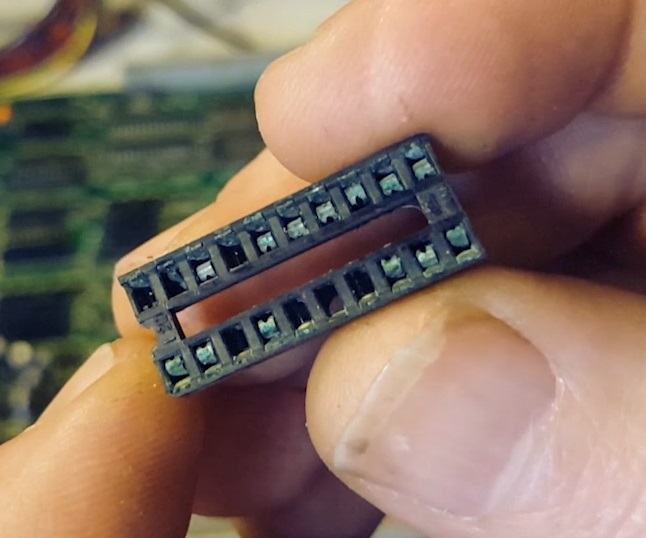 Let’s put new sockets in place and see what we get. 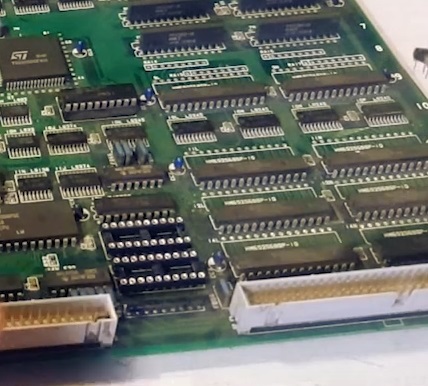 Still no boot. I took both pals from my other set and dropped them in.
After some more swapping I found that the Rom1 pal is working so it was just the BUF1 pal that needed to be replaced. 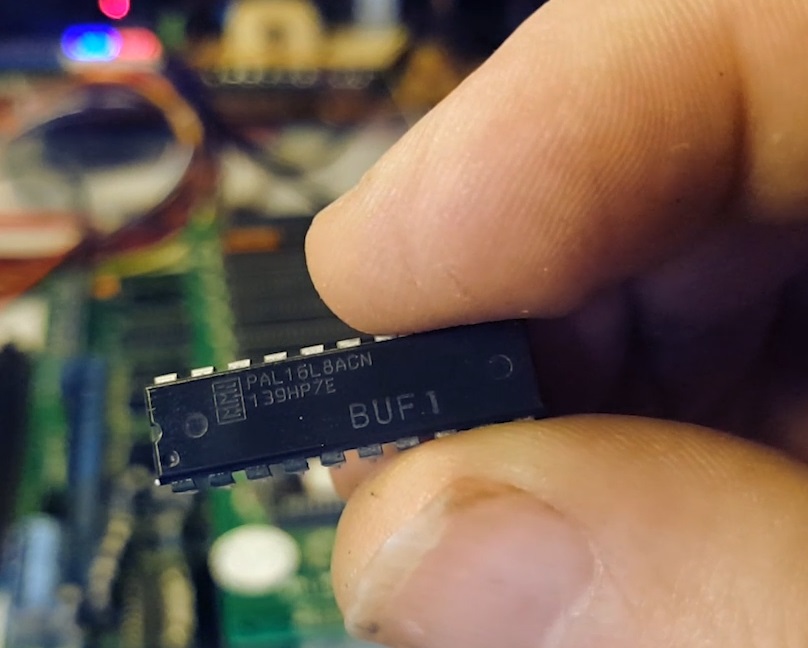 Success!! The board is now booting and playable. Sound is also working fine. 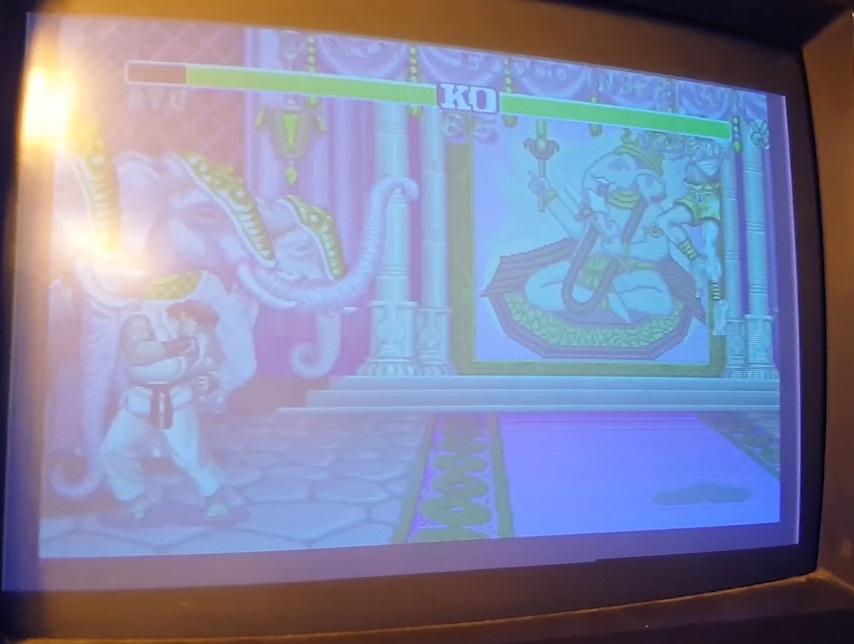 But it seems we’re missing the red color.

A look at the schematics tells me me which ICs are handling the rgb output. We’ve got two rams outputting to 2 LS273 flip flops. This is then sent through ls07 and ls367 buffers, through resistor arrays before being output to rgb. 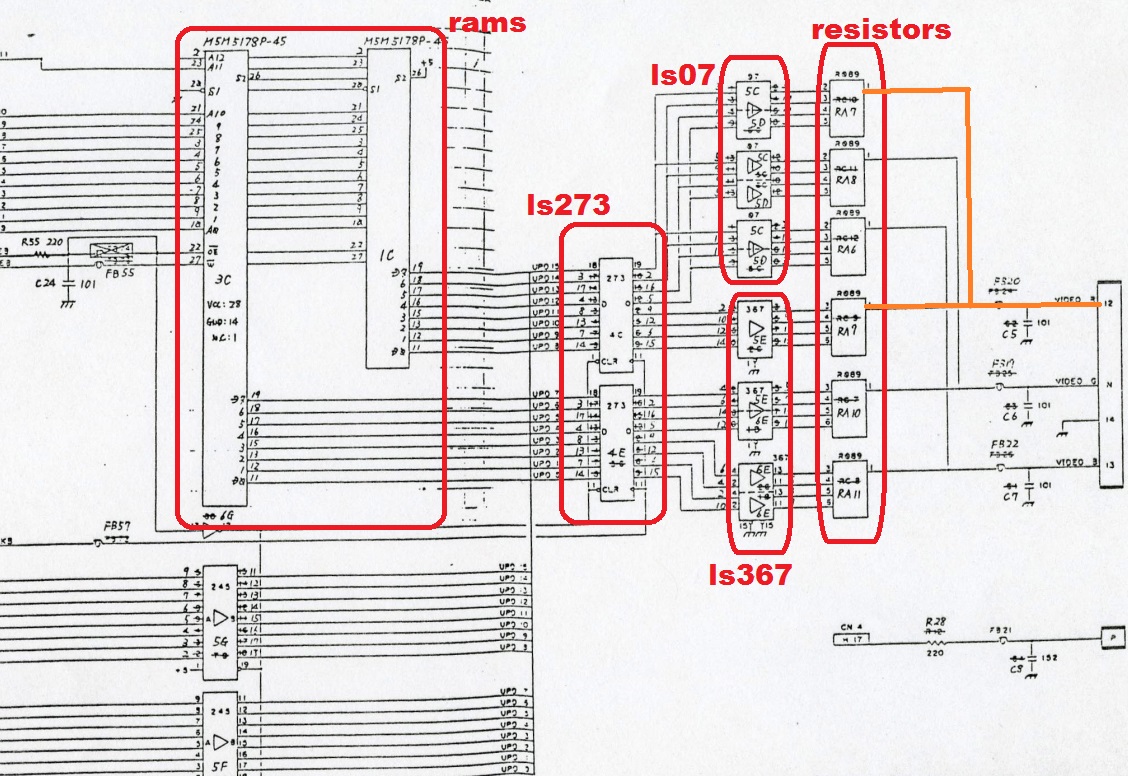 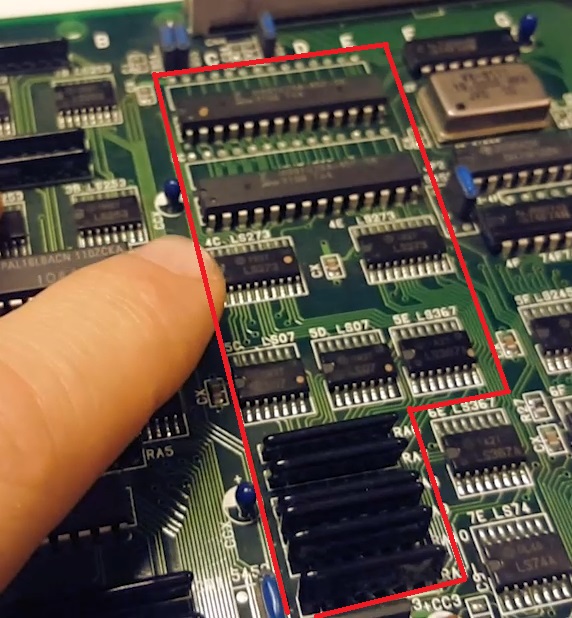 The difficulty here is that apart from the legs of the rams and resistor arrays which can be probed from the underside, the other ICs are SMD and hidden by the b board so I am not able to probe the legs. Time for some logical guess work :

Since the pairs of ls07 and ls367 are shared across the colors it’s unlikely one of those has failed or it would affect more than one color (still possible but unlikely)
Two resistor arrays are needed per color. If one had failed, we’d get some red at least but here it’s all gone and while it’s possible, it’s unlikely two are gone
So I’m first going to look at the RAM at 1C and the 273 at 4C
Probing the RAM seemed ok so I decided to remove 4C and replace it. 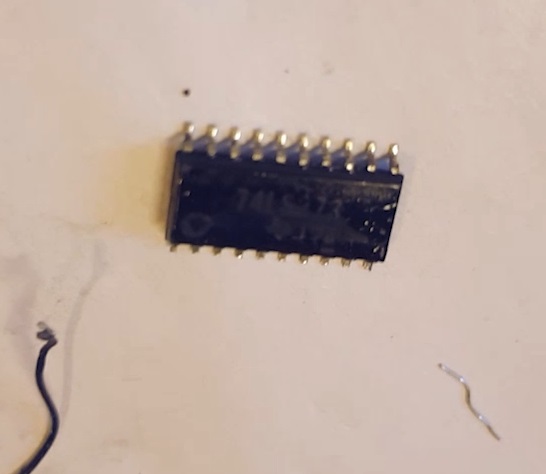 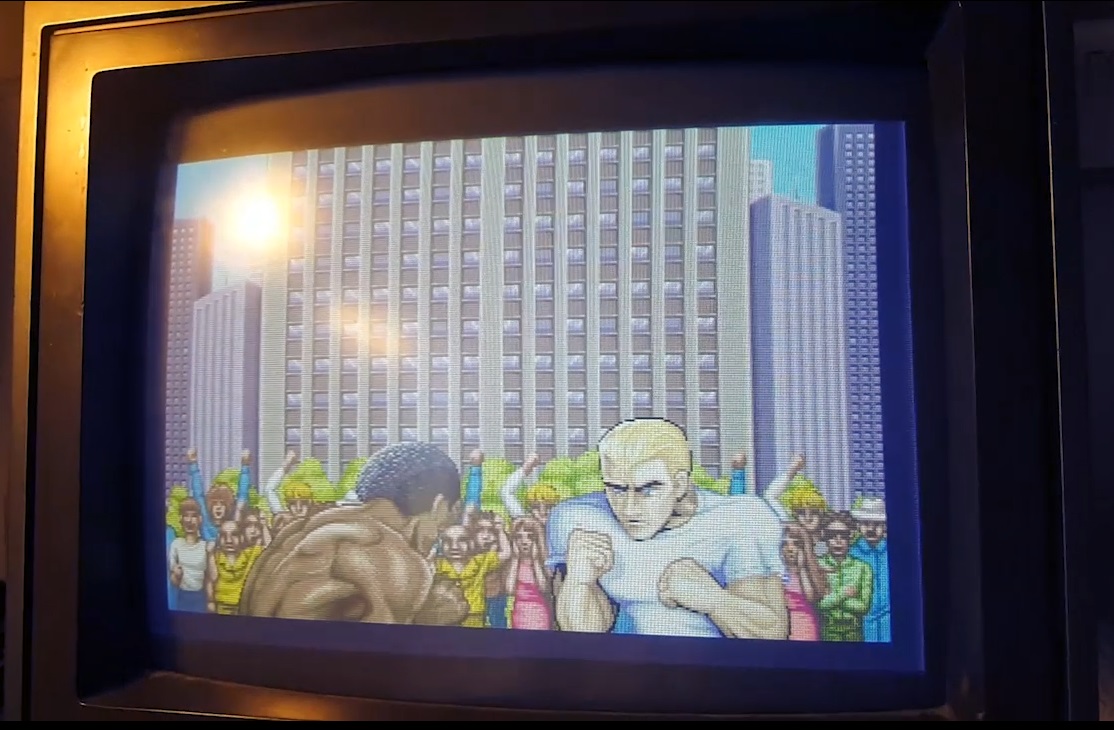 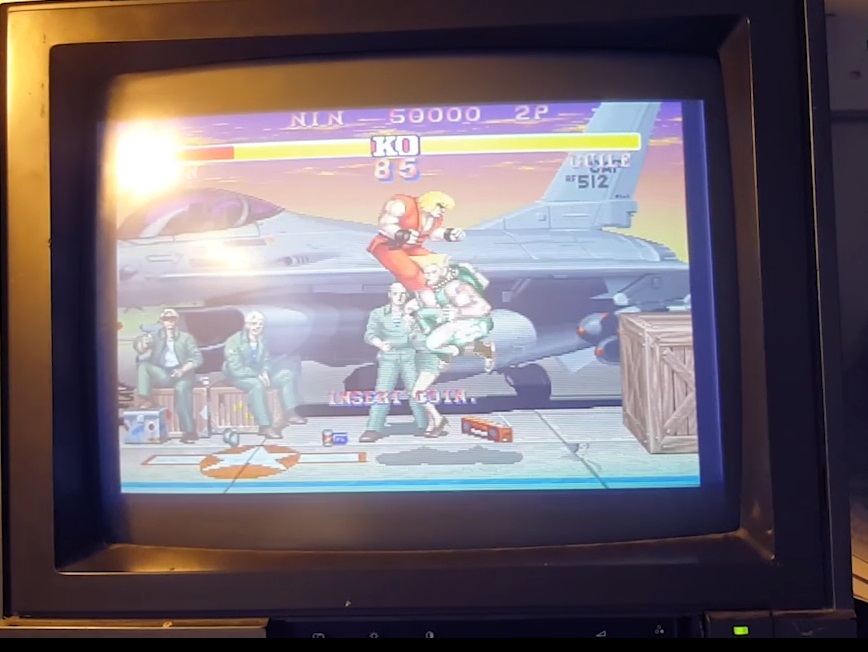 Behold a working (for now) Street Fighter 2 CE CPS1 stack. It’s a bittersweet victory though as there’s no telling when that CPSA chip will fail (not if but when) . But for now I’m going to enjoy some Capcom fighting. Thanks Kris for the PCB donation !

And for those who prefer the video format…

Here is something a lot of people wouldn’t even know existed and those of us that did had given up hope of one being found. As luck would have it though, DrGlitch on the Jamma+ forum located not one but two of these machines here in the UK.
Even better he loaned me the boards to dump and they are currently in the capable hands of Haze who is working on getting this thing running. 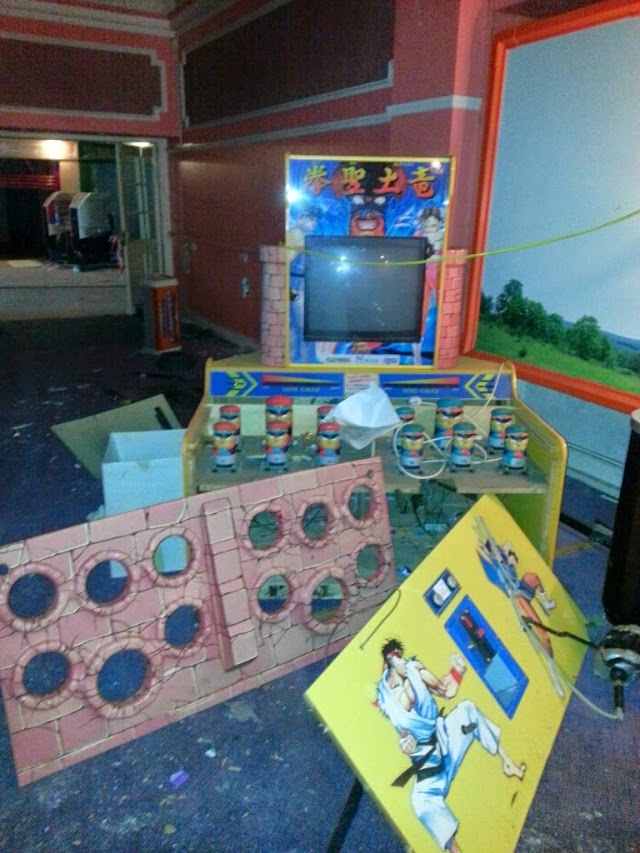 Here you can see the usual CPS1 PCB stack. 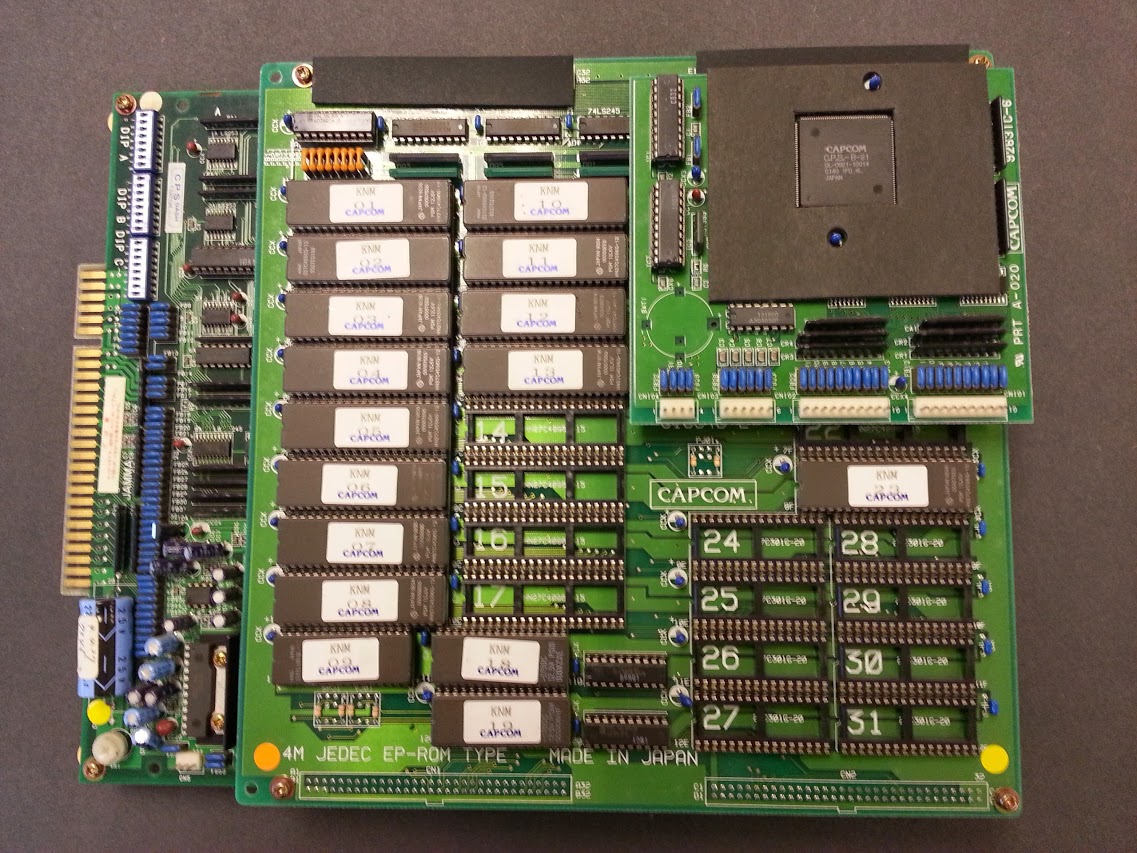 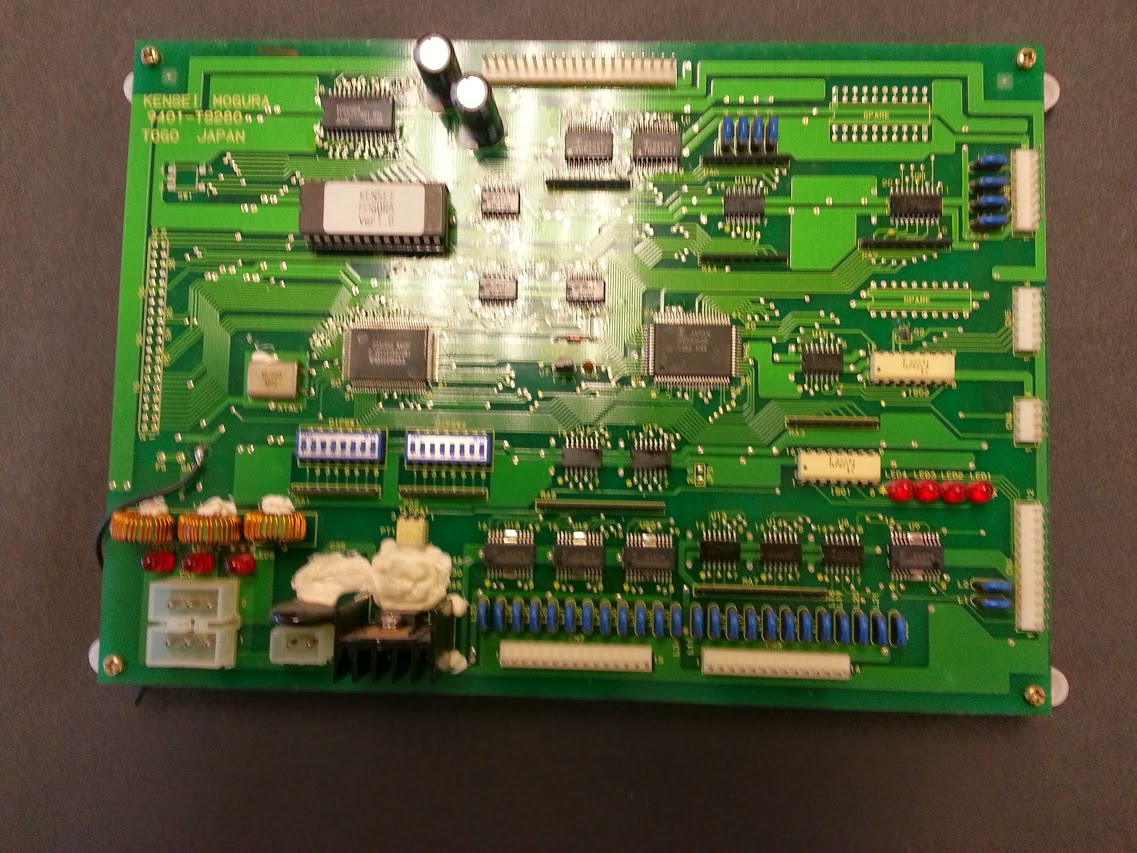 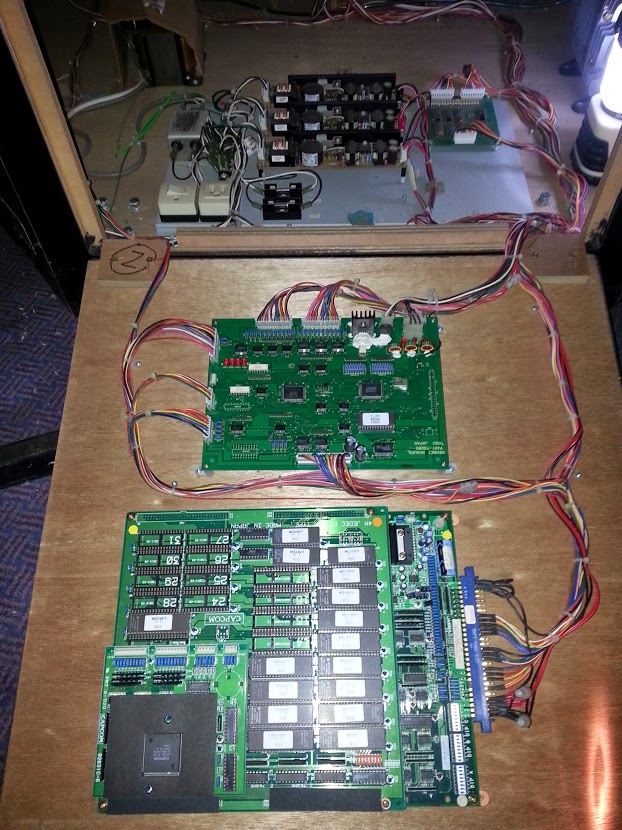 We also got the manuals for this thing too.

Its an excellent find and cannot thank DrGlitch enough for loaning me the boards so we can get them dumped. 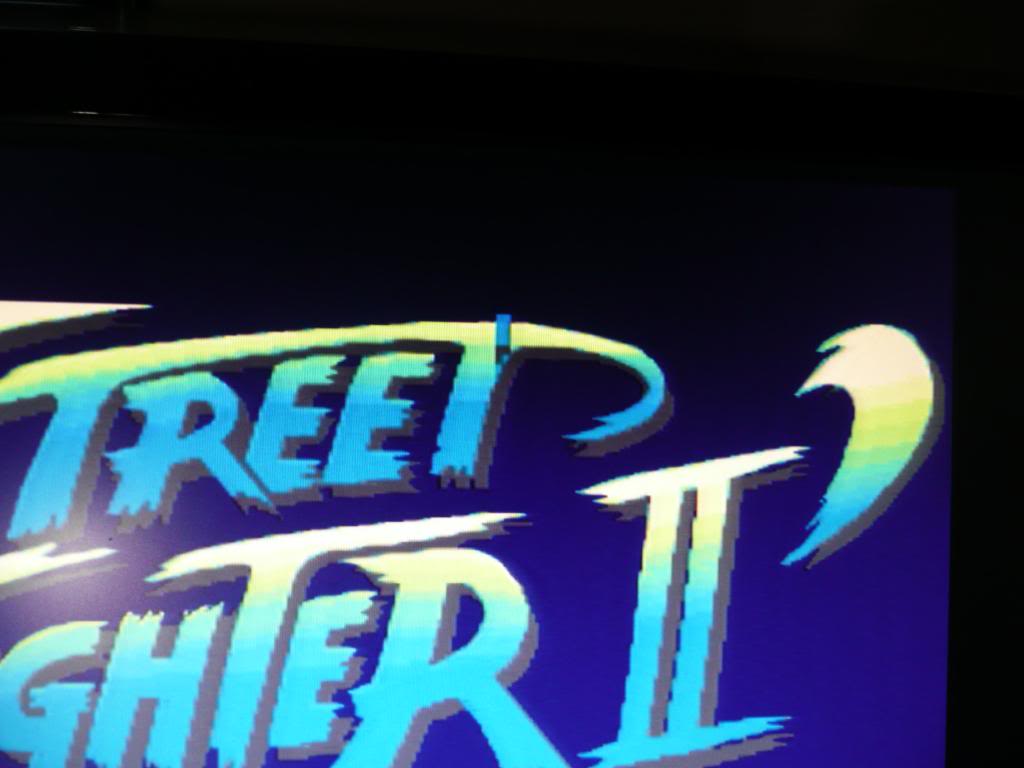 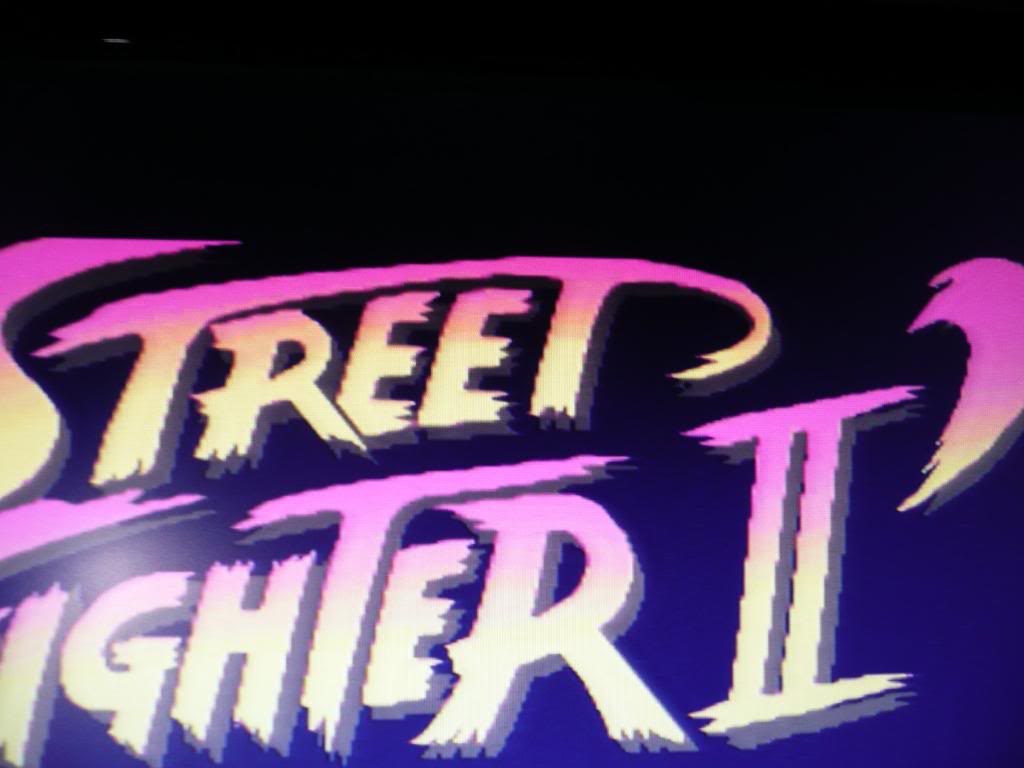