I got several months ago this really rare game from a laserdisc collector for a repair. It seems that this game was made a few units and many of them very found in Italy .

When I received the pcb, many attempts to repair were made, it had a lot of chips already in sockets and jumping wires all around due to the poor soldering skill of the one who attempted the repair.

On top of that, the pcb had some overheating (disconnetion between bottom layer and top layer). 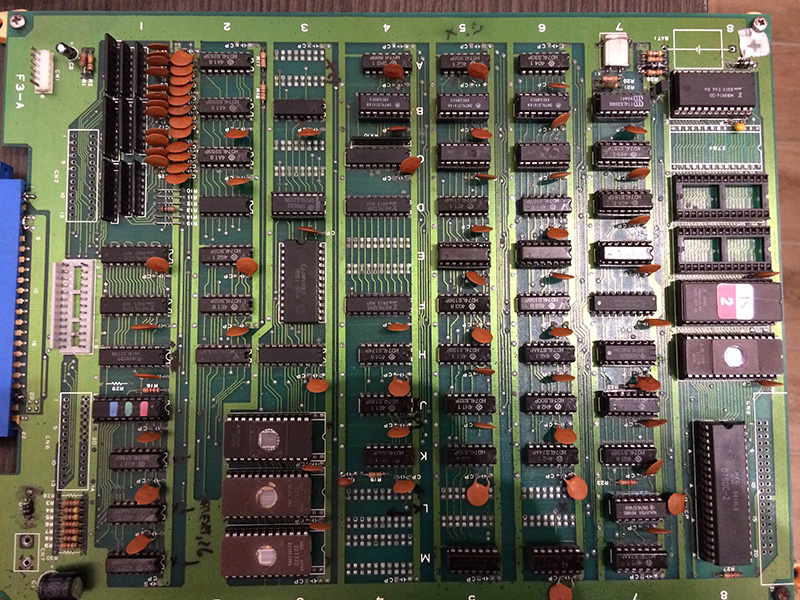 I made a Jamma adapter without any pinout or schematics because this game has no documentation whatsoever.

Luckily the pcb design is really simple, with only TTL logic.

When turned on, the game didn’t even sync with the monitor. Given the fact that the game has only one clock I immediately started my troubleshooting

by looking around that part.

I immediately found out by tracing the circuit that 3x 74LS161 (Fujitsu parts) had lots of output dead.

I procedeed to change all three of them 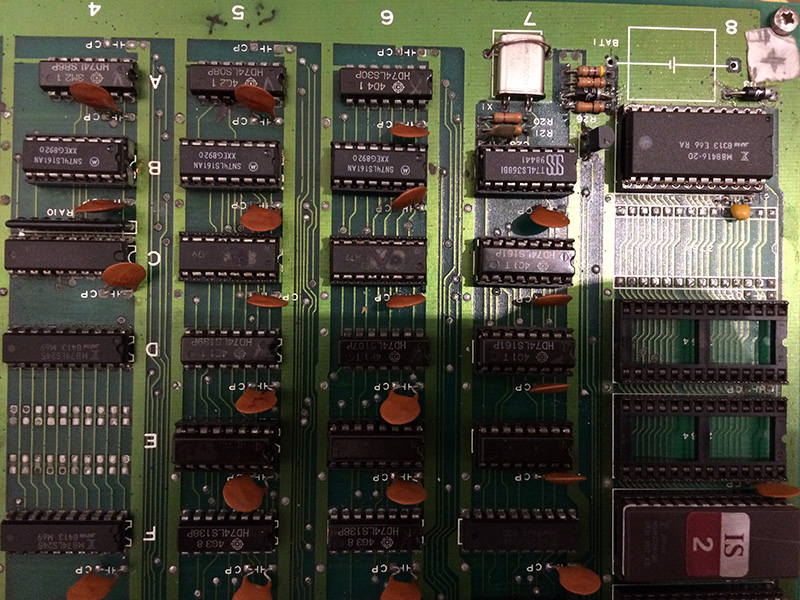 and finally was greeted with some colours 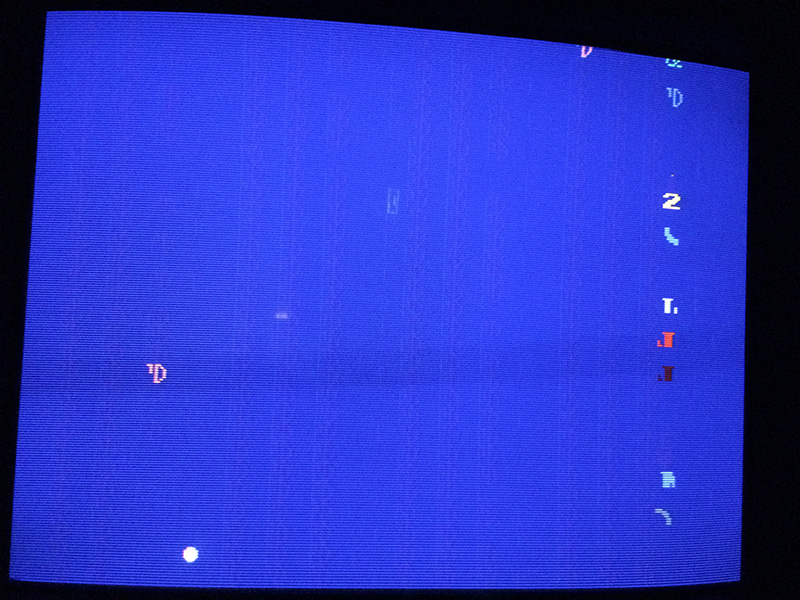 As you can see, the game still didn’t boot and was stuck

I checked the only program ram on the game (near the battery place) and found out that the data pins were not working.

The strange thing was that the ram was already socketed and was good.

Turned out to be the first of several desasters made by the previous repairer.

He soldered badly the GND pin which apparently was not making contact to the pad, so the ram was not powered.

After fixing the issues, I finally was greeted with this image: 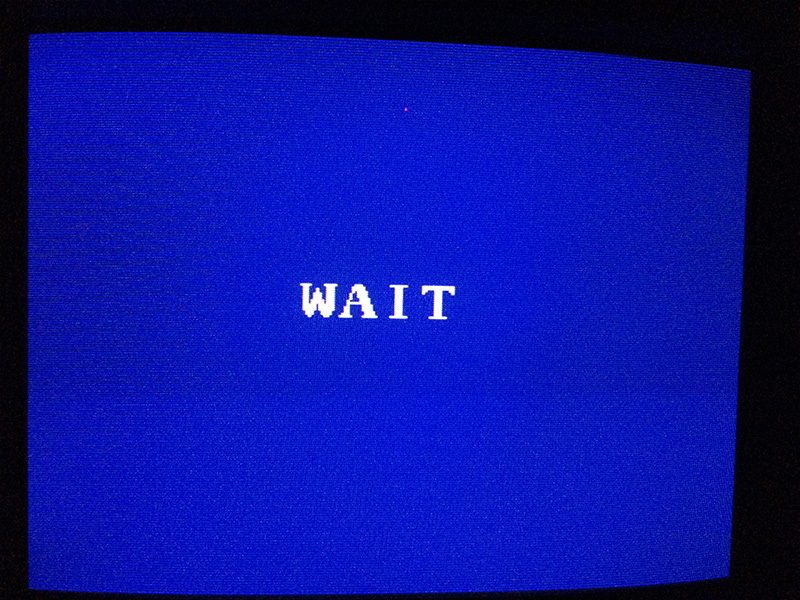 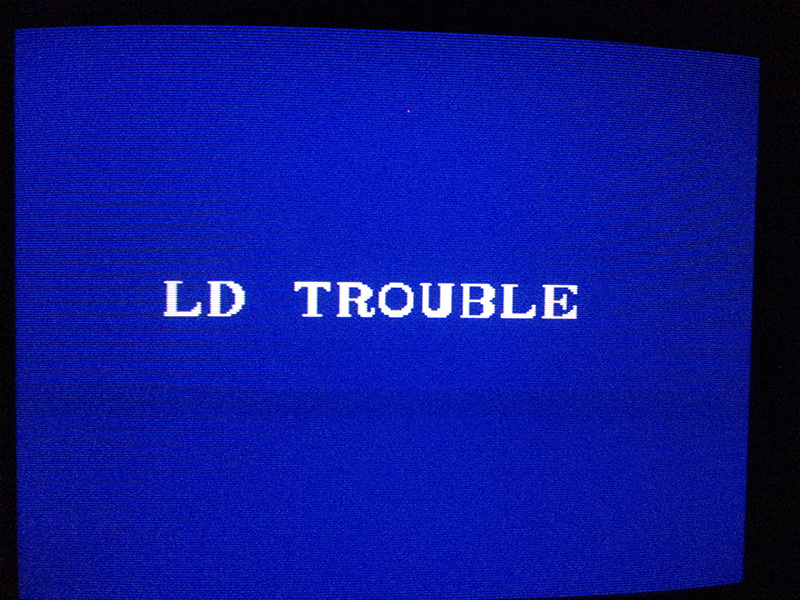 Good news, because it meant the program was running but was not finding the Laserdisc unit

At this point I was quite sure I repaired succesfully the game , so I met the collector at his house and tested the pcb

with the original cab, but the game still didn’t find the laserdisc unit!

Ok, there was something faulty in the serial comunication on the pcb because the cables and laserdisc unit were good since they worked

on the other pcb.

The collector was waiting for a Dexter unit, which is a device which emulates a laserdisc and you can store the movies on a micro SD card.

Therefore we agreed I would wait to have this unit borrowed to continue the trouble shooting.

After 3 months of waiting, the Dexter finally arrived and I resumed the trouble shooting. 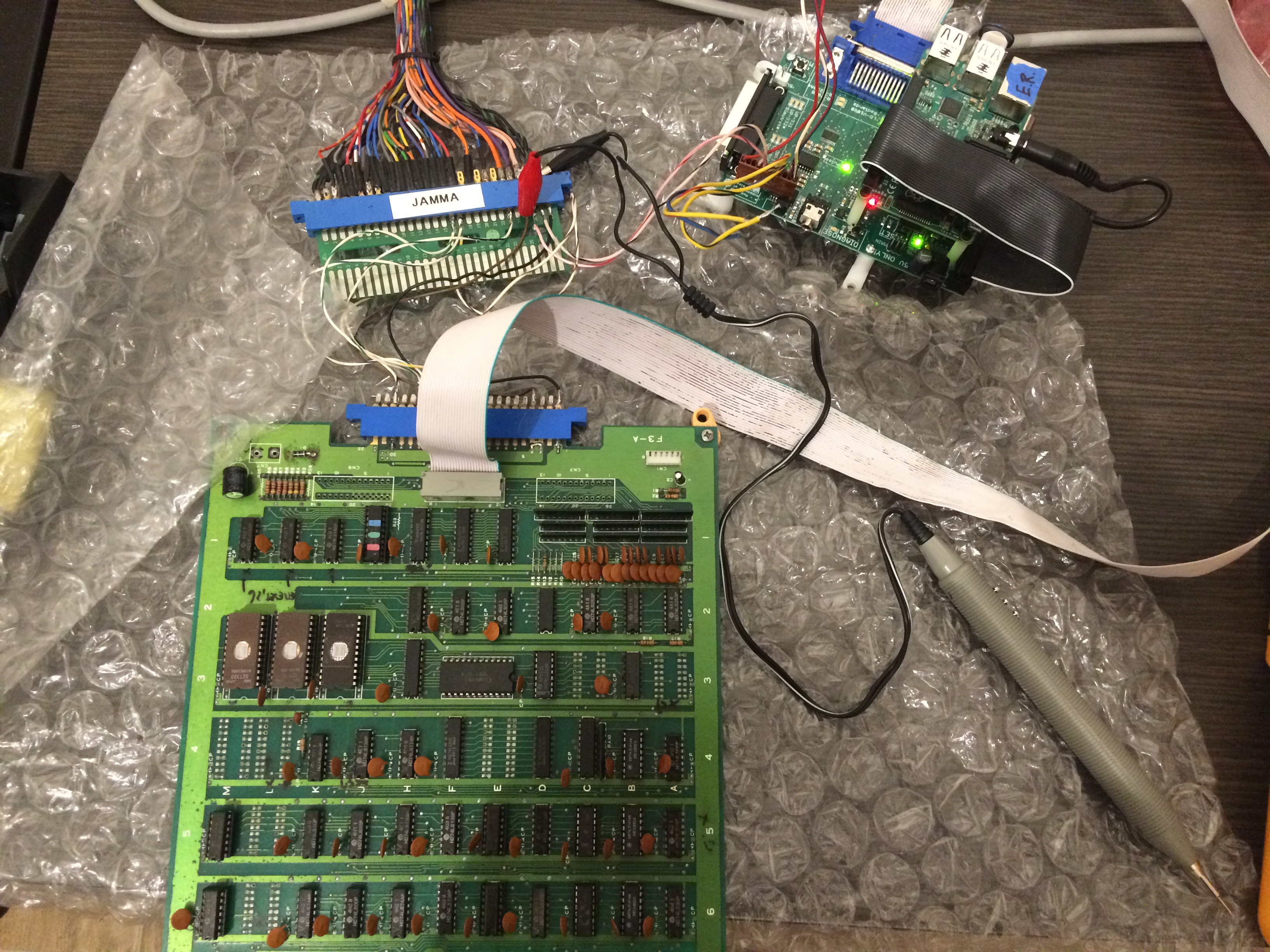 Tracing back the signals from the connector of the laserdisc, I came to a couple of 74ls245 and one of them had the enable pin in the grey area.

I followed the trace back to a 74ls365 which was exhanged previously and guessed what? Bad soldering again! 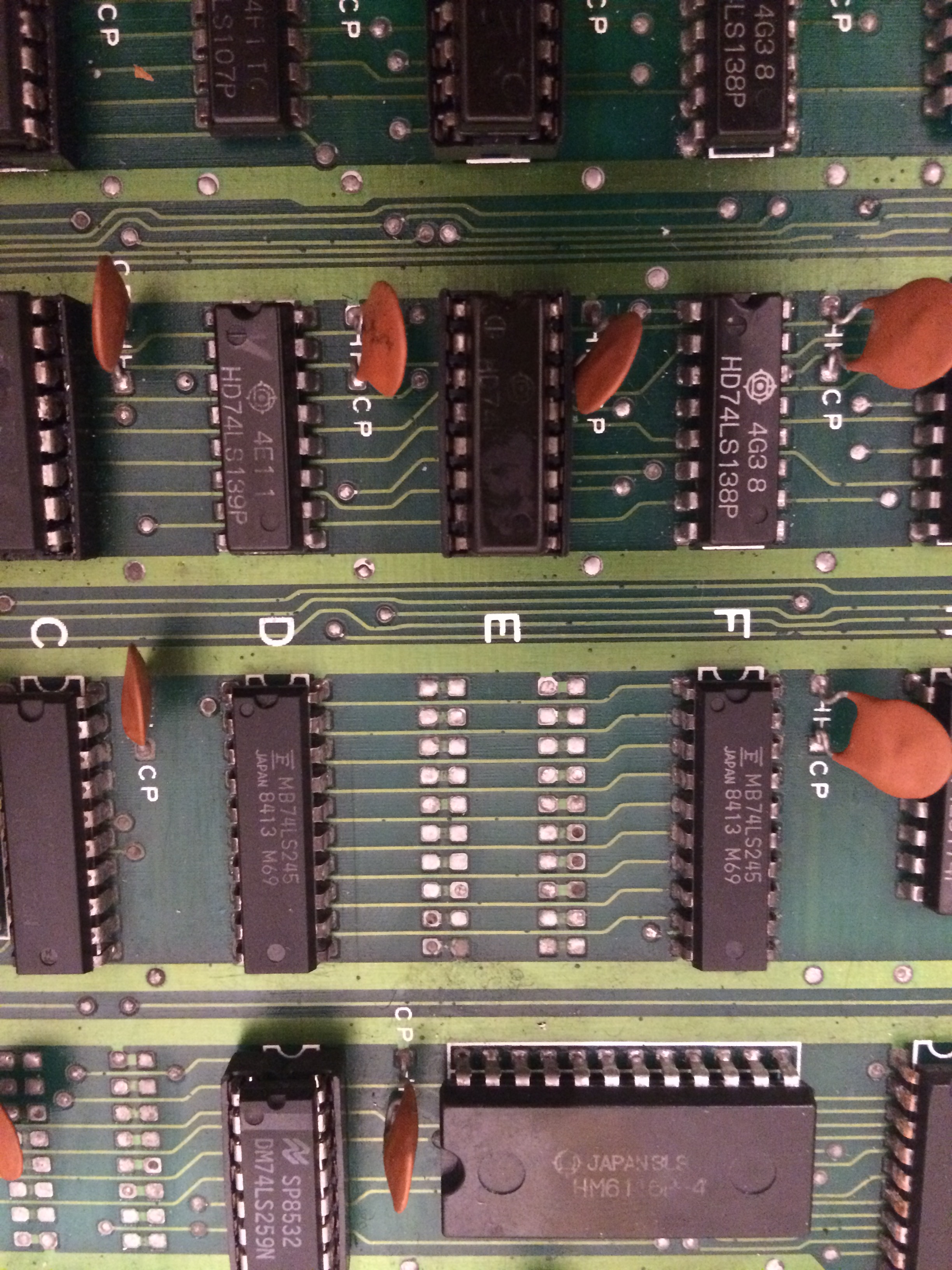 I melted the bubble of soldering and restored the connection 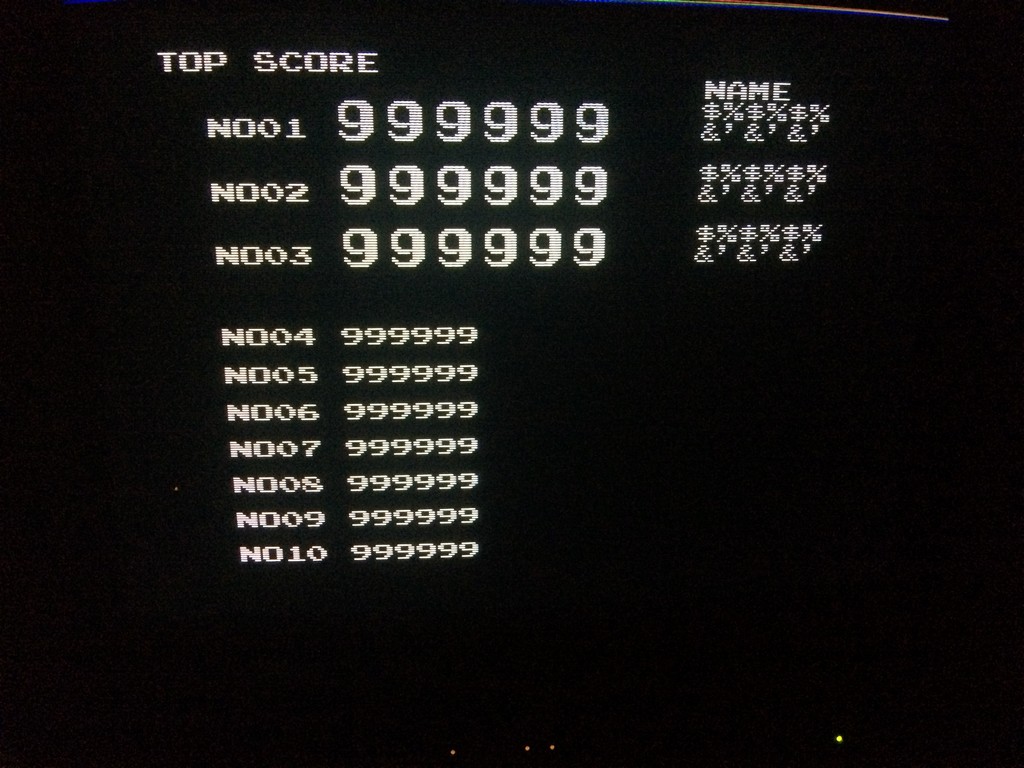 I have no TV with composite input therefore I couldn’t see both digital images and the movie of the game but the attract mode worked and I could play the game blind.

The wrong numbers were due to the missing battery.

Therefore , for the sake of completeness I put a NiMh recharcheable battery and I tested the game again.

Game didn’t boot and was stuck at the blue screen again!

To cut  a long story short, there was a problem on the Z80 reset line.

The game randomly started but not always, and the battery made things even worse.

At the end I found out that still the same repairer changed the original RST518A, with a BC54 transistor which held the line always high

I found another replacement IC and fixed the game 100% 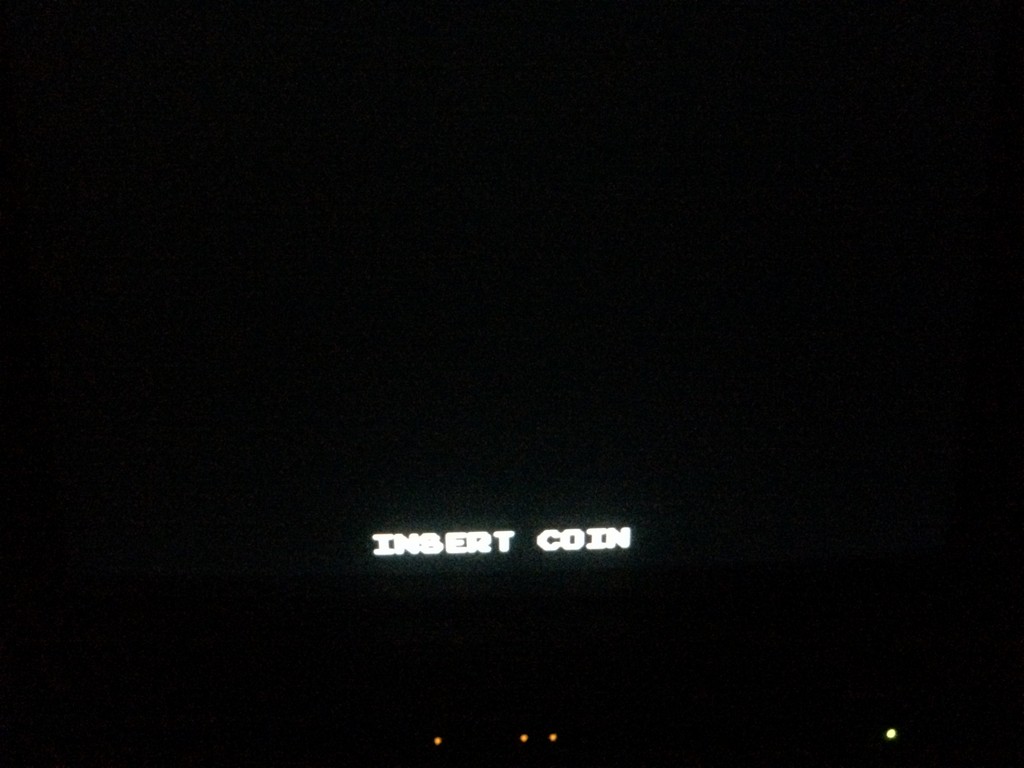 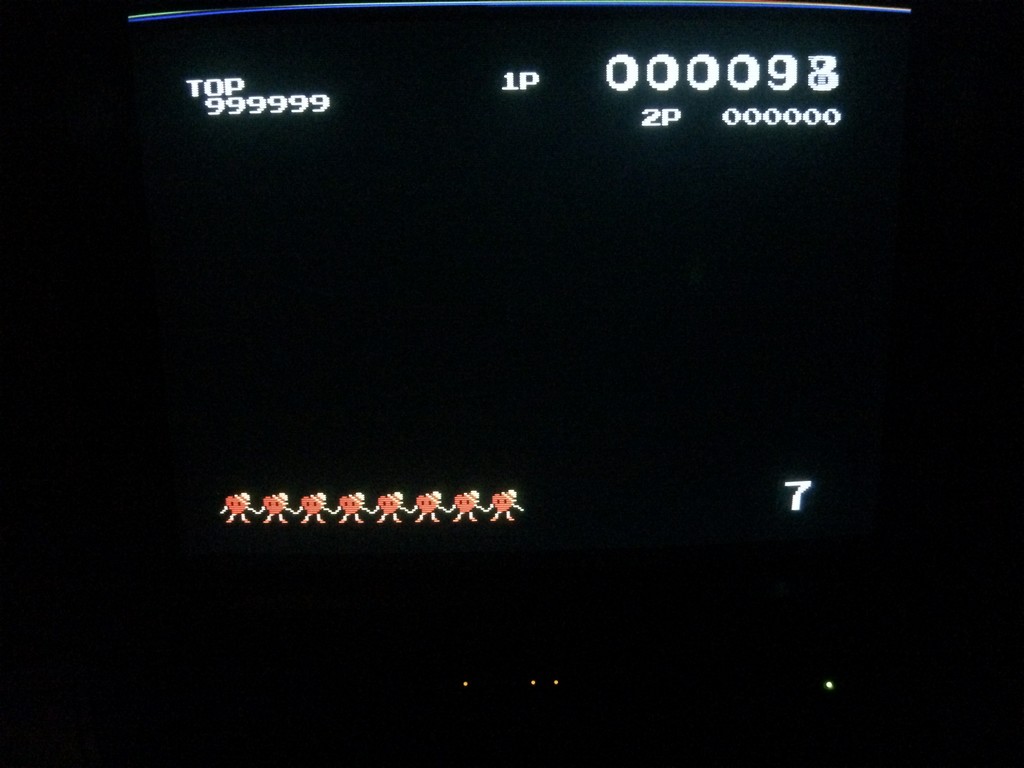