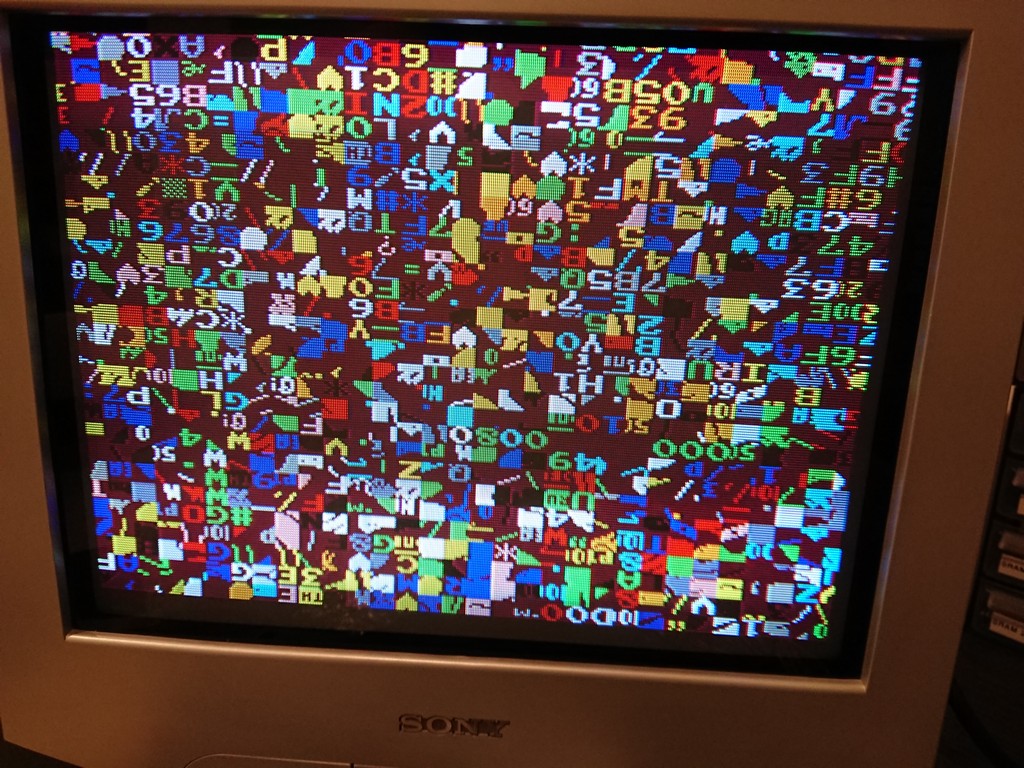 Decided to have a look immediately to the 2k work ram which was a Toshiba which is normally prone to faults. 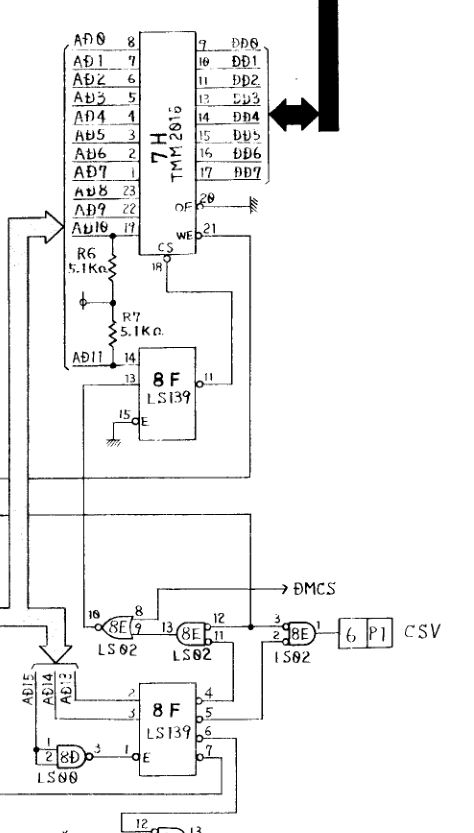 Changed with an Hitachi 2k 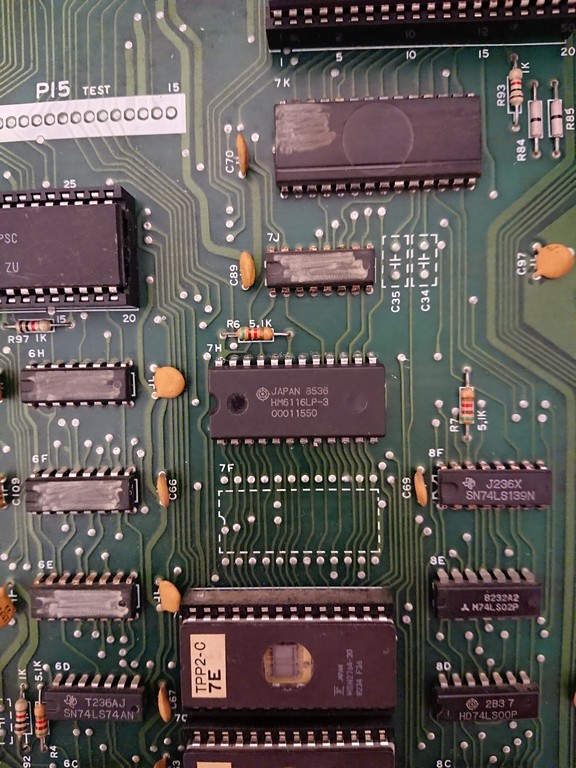 And game 100% fixed with no other errors 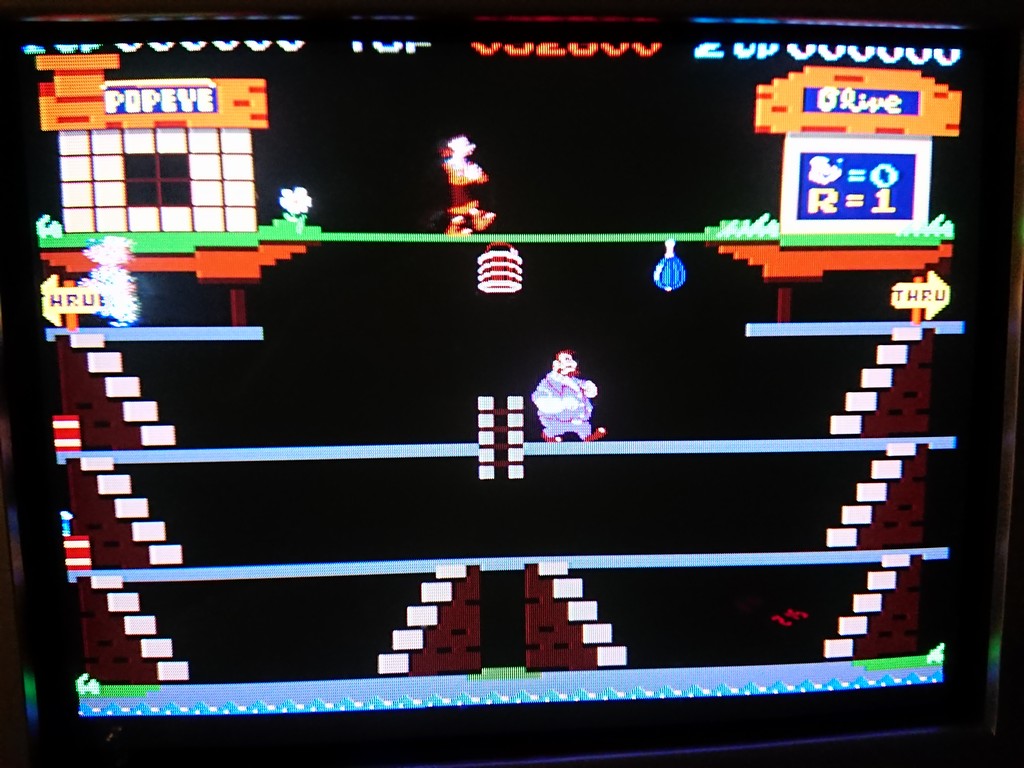 I bought this system in a lot of faulty pcbs. 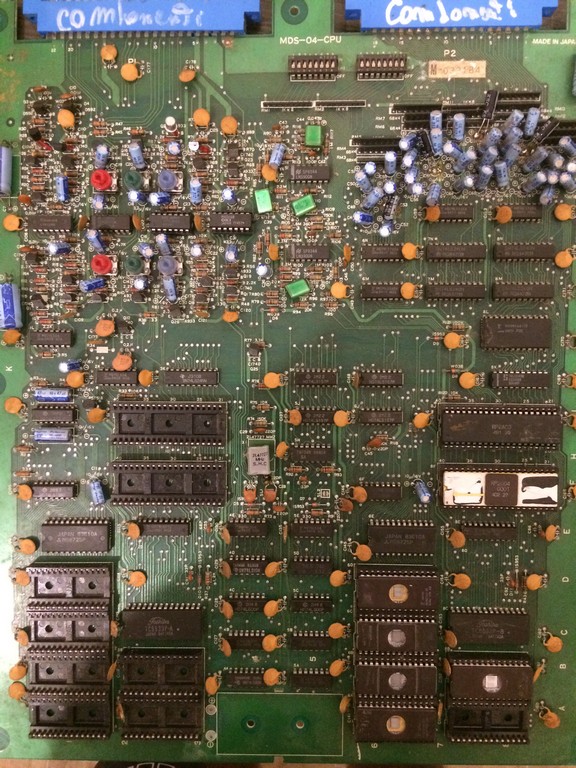 Game was booting but it had no sync and the graphic was all corrupted. 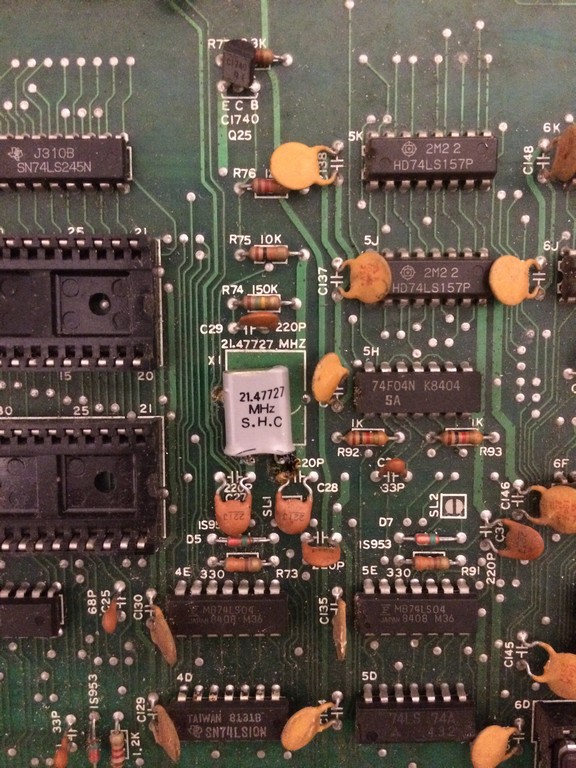 After changing it, the game was back to life but it was missing the blue component 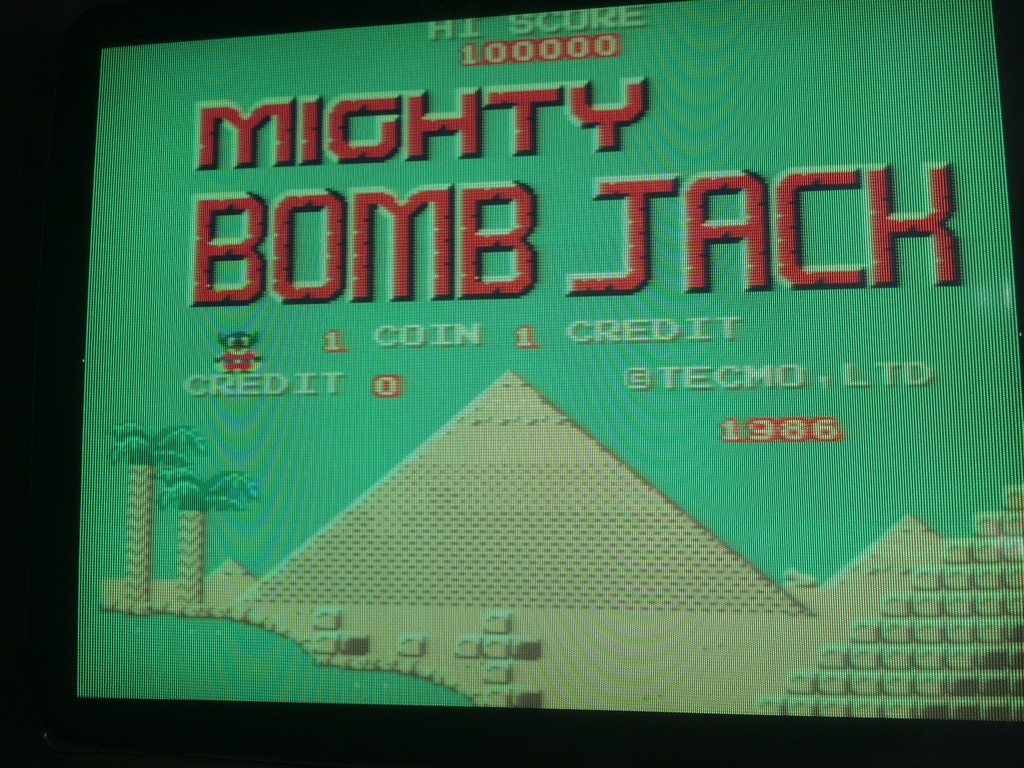 Looking at the schematics , I could confirm that the RP004 video chip was giving good signal on the BLUE signal pin, therefore I started

to check the LM324 OP AMPS involved in the DAC circuit. 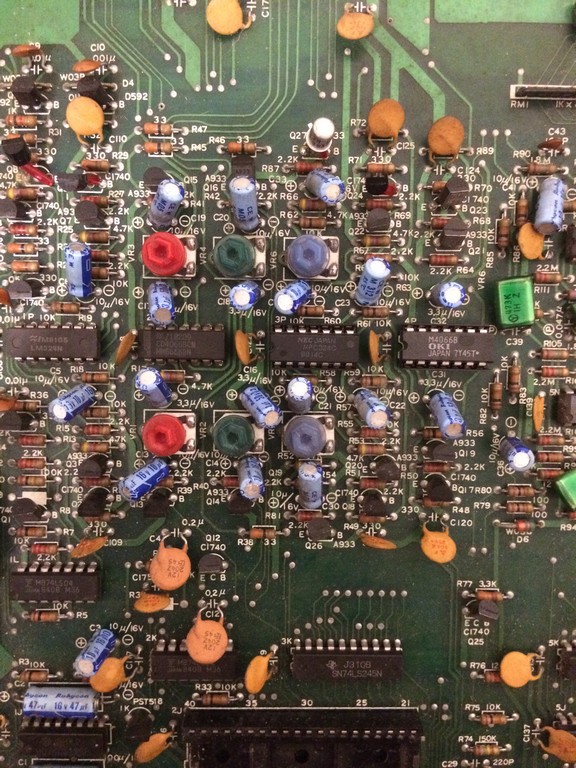 By turning the blue pot I could see briefly some “sparks” of blue ,therefore confirming that the blue component

In the end it turned out that the blue pot had some cold joints on the ceramic base.

I reflowed the solder and the game was 100% fixed 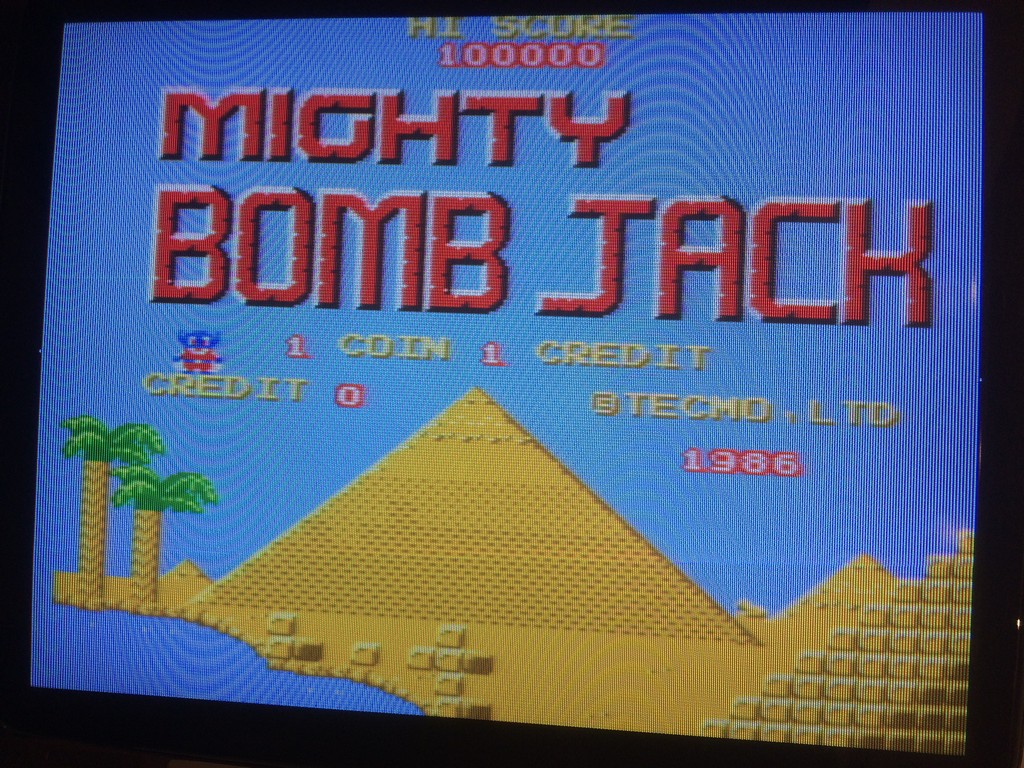 Recently I offered to help out someone wanting his Super Adventure Quests NES cartridge dumped.
I was quite surprised at first as I thought all NES carts had already been dumped but apparently not.

Here is the cartridge in question. 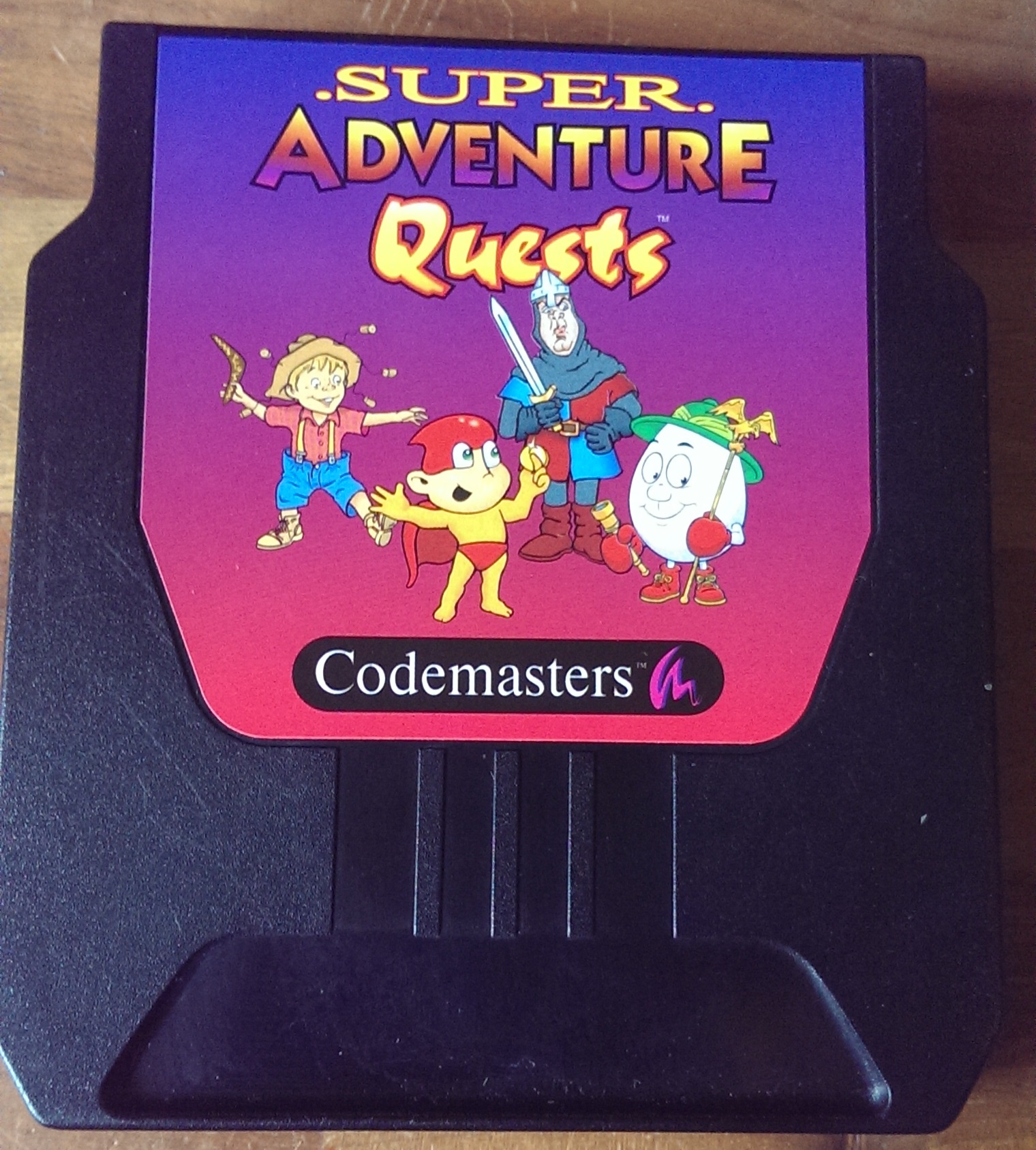 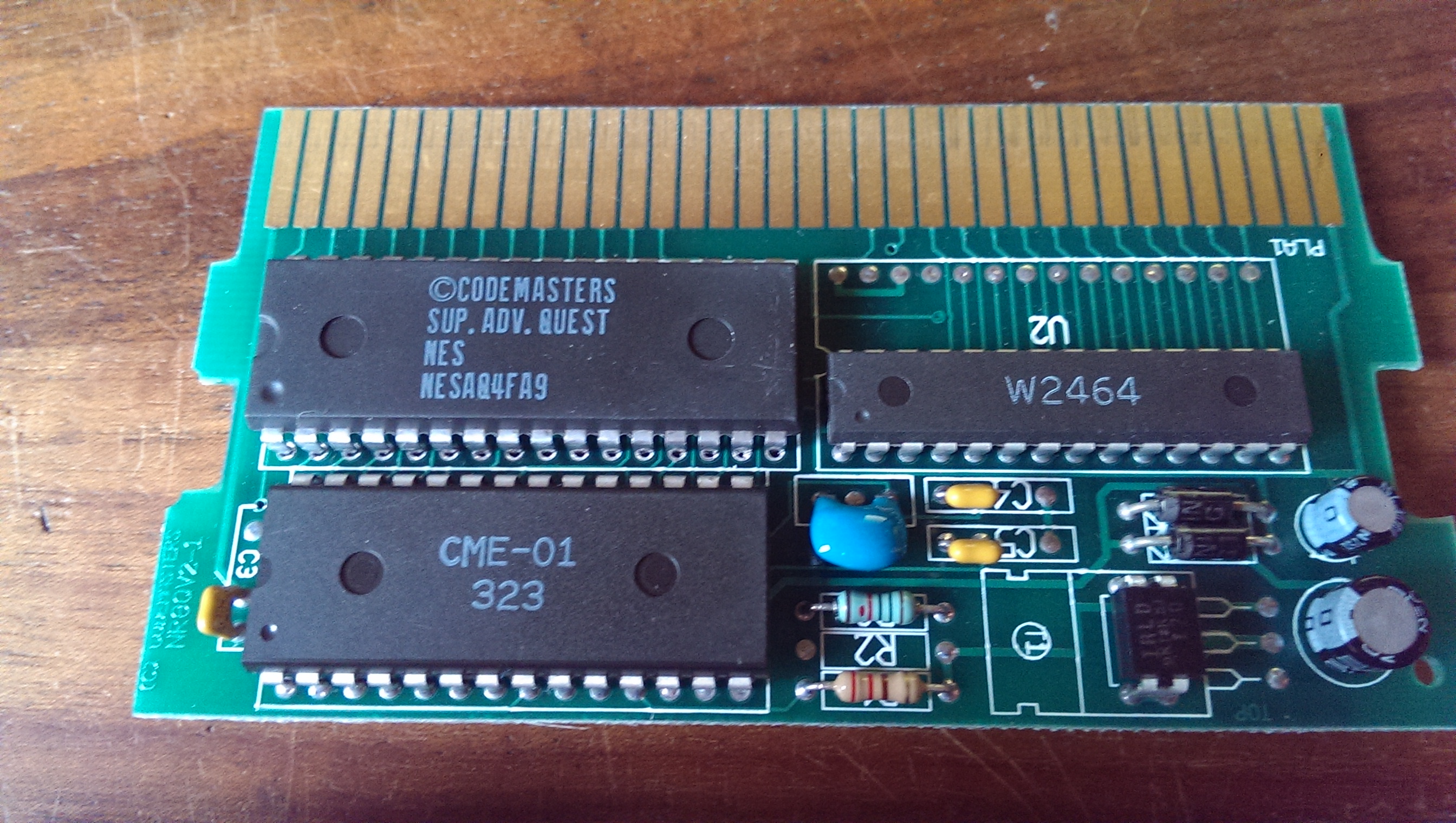 This is the same as the already dumped cartridge of Quattro Adventures. This was the NTSC release where as Super Adventure Quests was the PAL release.
The whole reason this dump in particular was wanted is because the NTSC release doesn’t work on a real PAL console using the Everdrive cartridge.

I got hold of this cart and decided the best and quickest way of dumping it was to desolder the ROM chip and read it out. 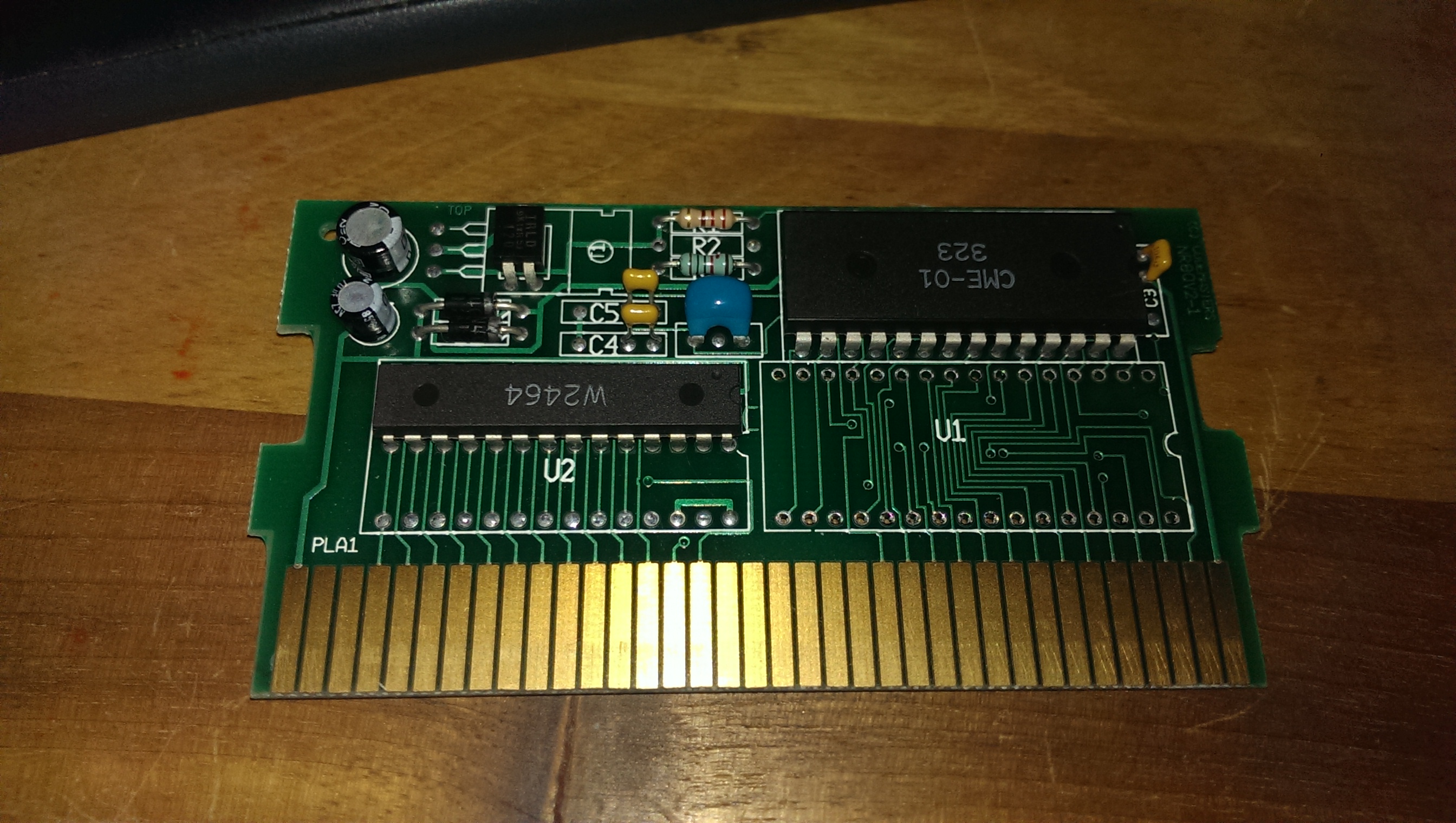 I looked online and the very small amount of information I could find suggested it was most likely a 23C2001 MASKROM pinout. As my programmer has support for this device it should have been good to go.
Well it didn’t work so after mapping out the connections on the PCB it looks like the pinout is the same as a 27C020.
This worked just fine.

Copying the iNES header from Quattro Adventures and prepending it onto my ROM allowed me to load it up in emulators to check it. 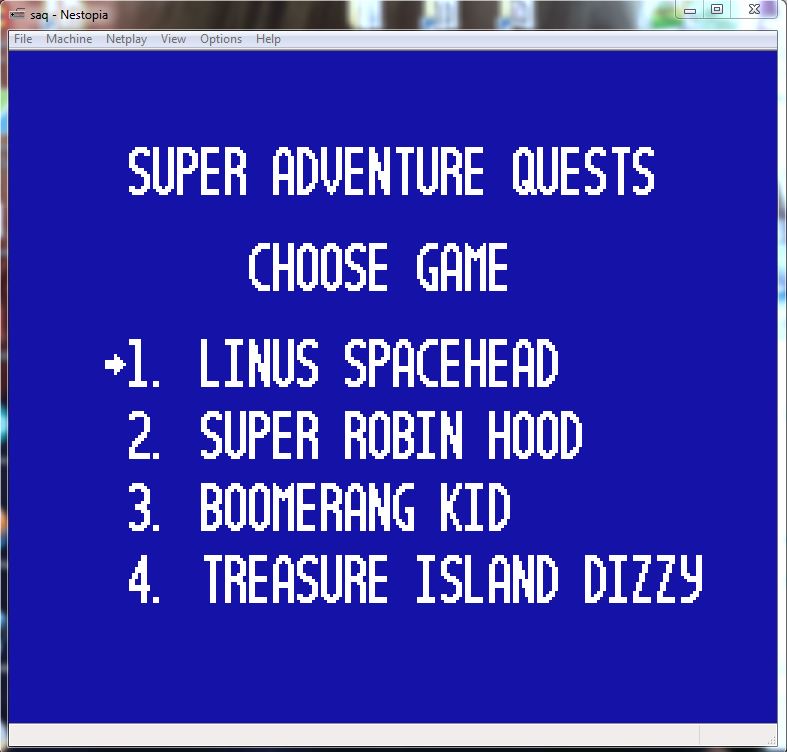 Job done. This has now been added to MESS.

Not really a repair but useful information.
My NSS board by default is set to stereo sound output.
This is no good for me but fortunately it can be switched for mono output via the on board jumper pads and the silk screen clearly states what needs to be done.
Although most people will not need a guide on how to do this, I thought id write it up anyway for just for the sake of it.

Silk screen instruction clearly show for mono output jumpers SL1, 2 and 3 and CL1 and 2 need to be closed. 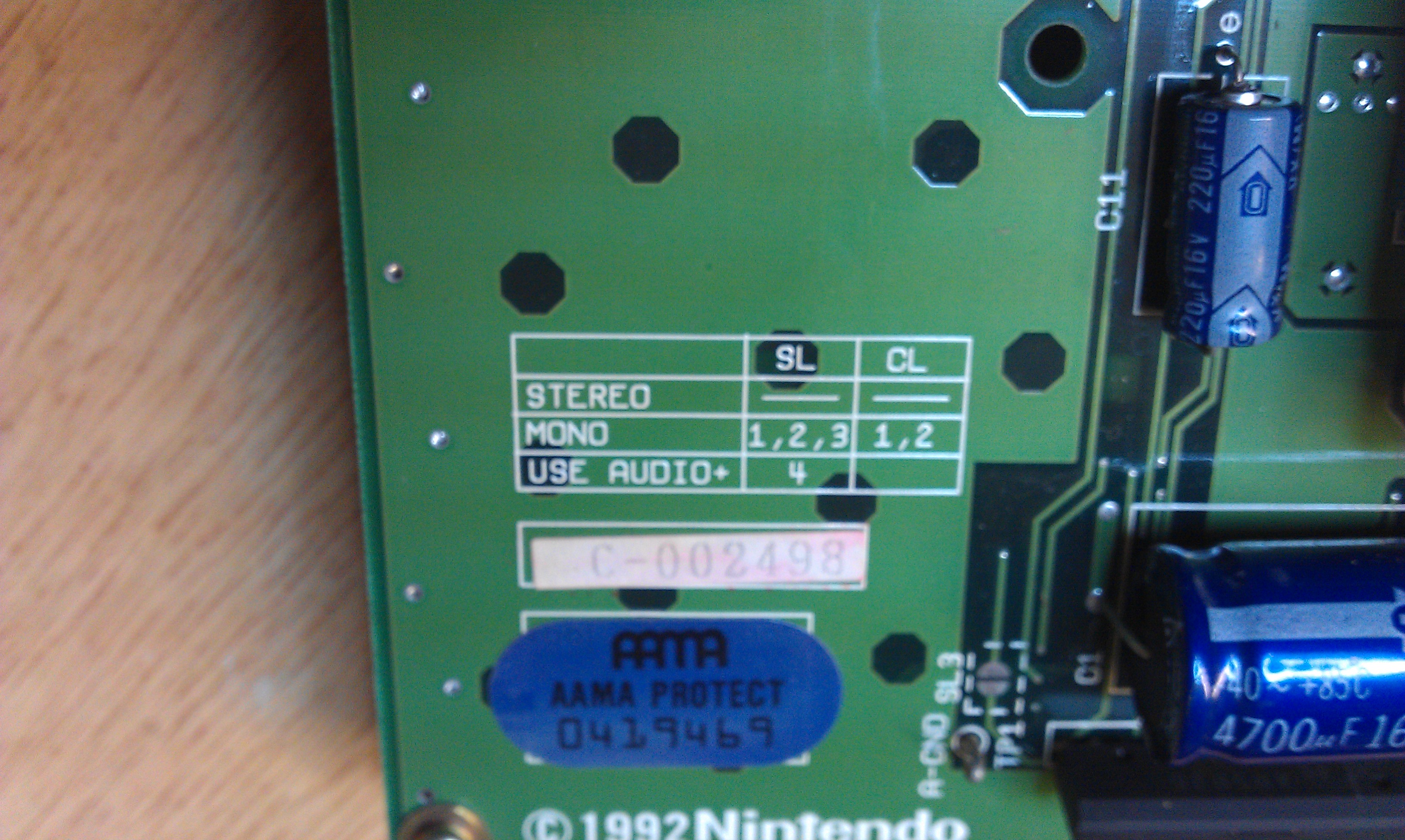 On my board the CL jumpers were already shorted but non of the SL ones were. 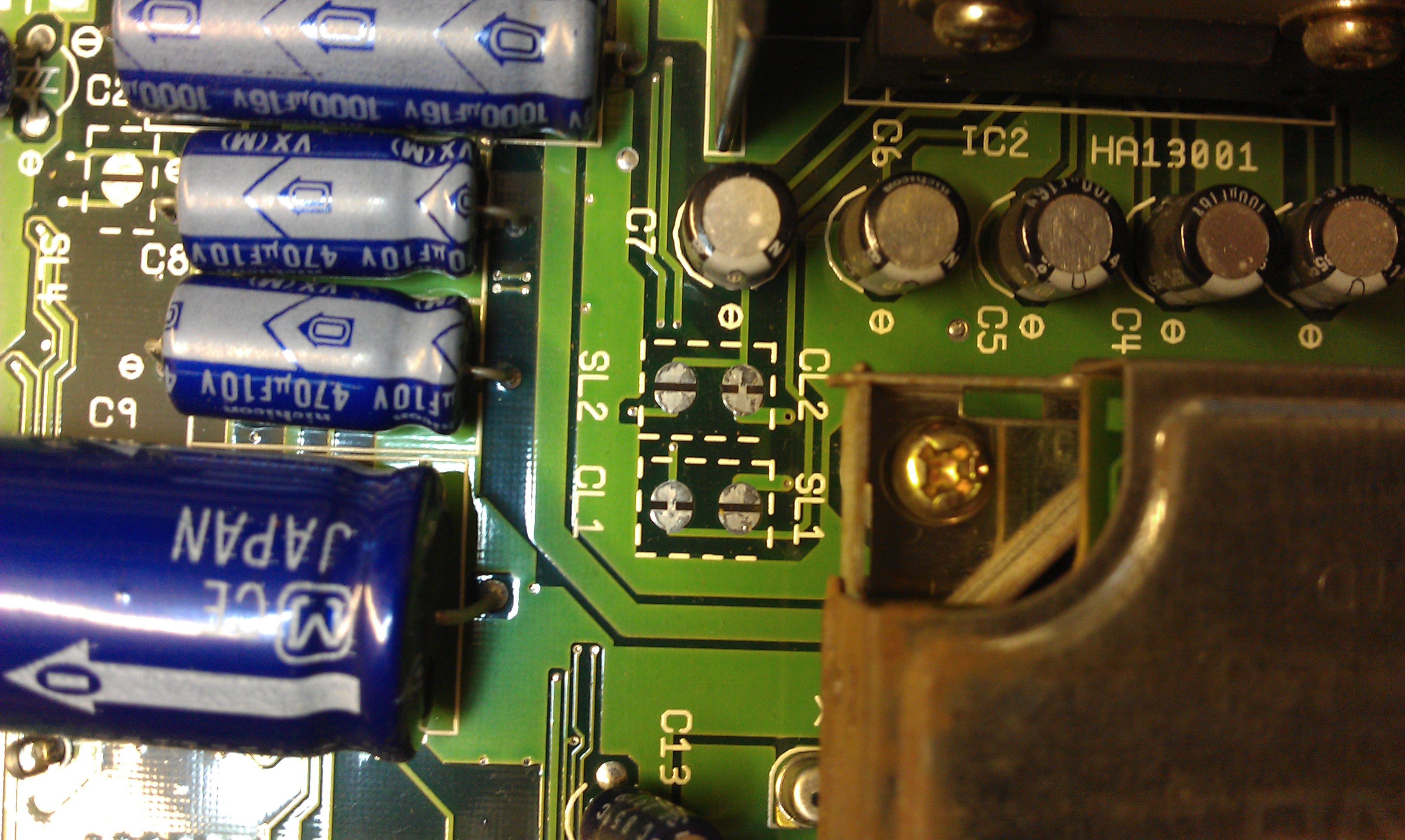 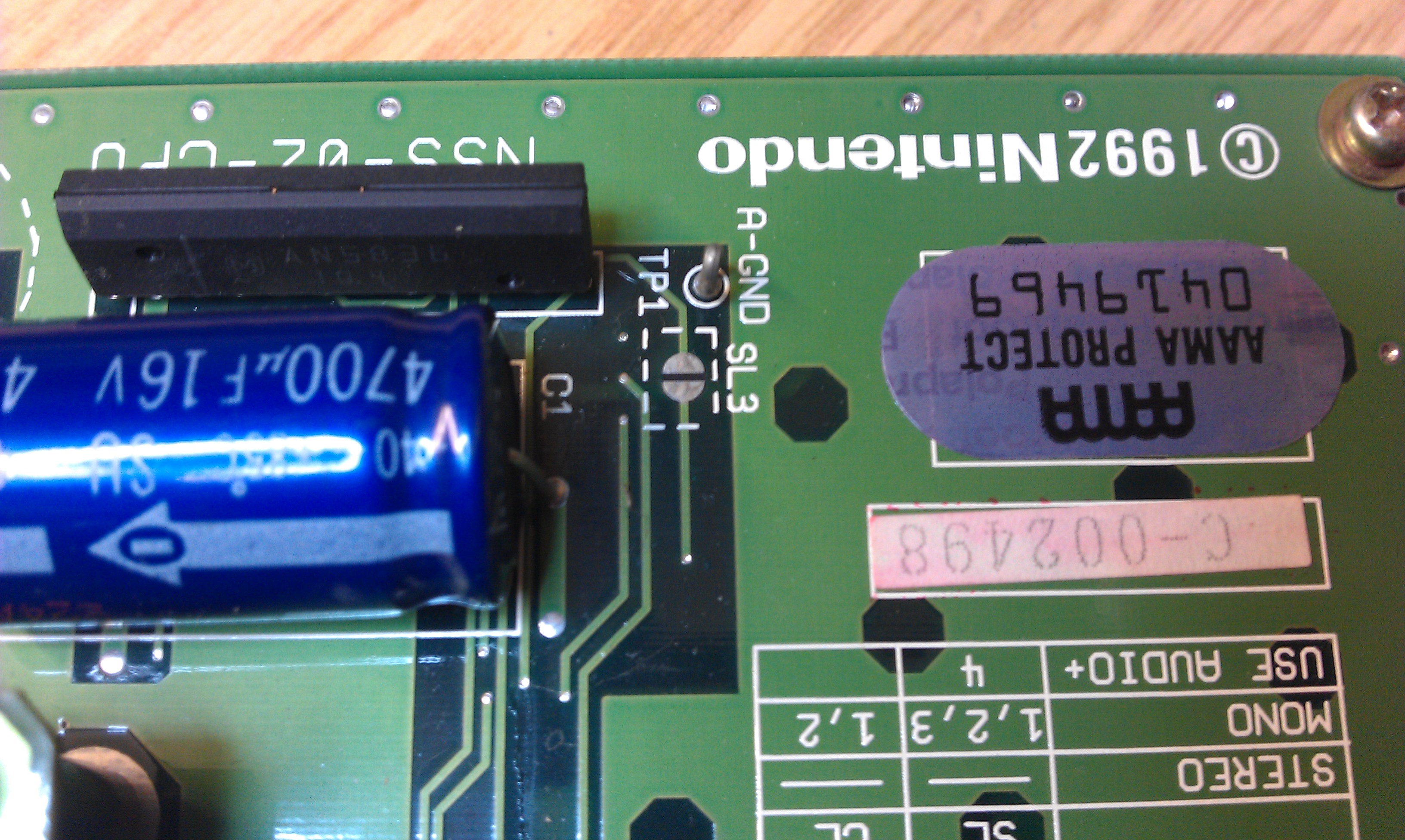 I used a tiny off cut from a recently soldered capacitor to make up small links to solder in and within a couple of minutes all was complete. 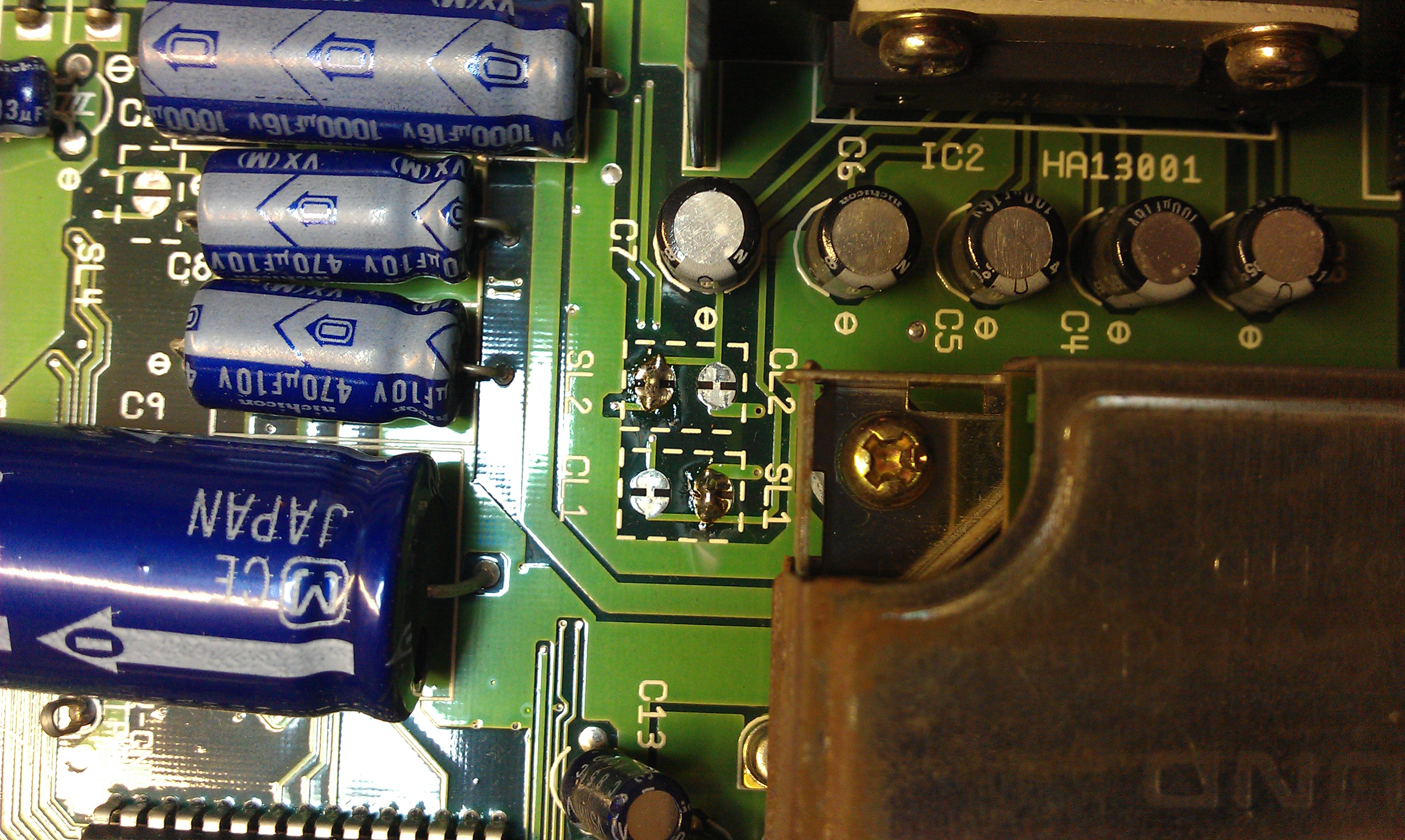 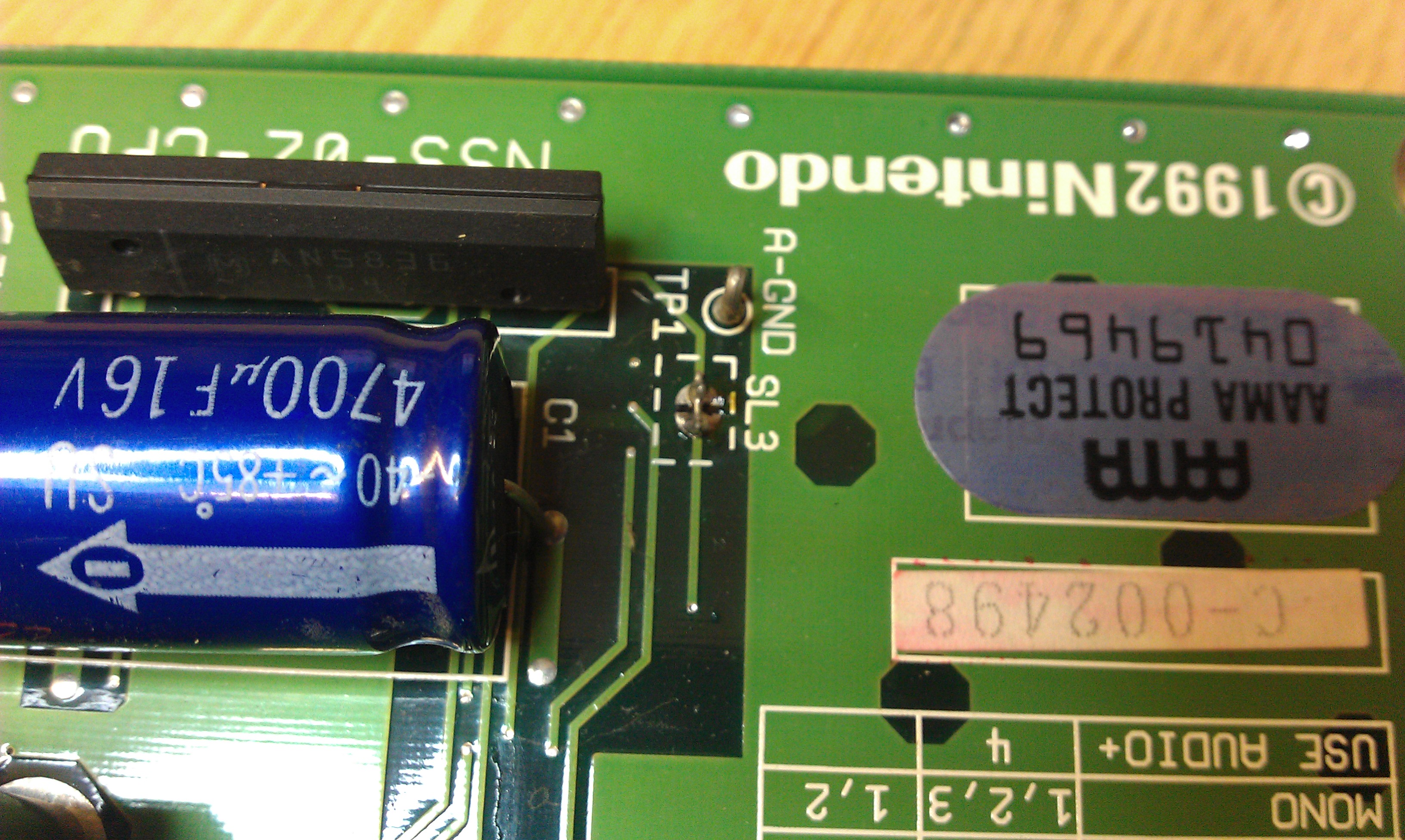 The board now outputs mono sound.
I also noticed my BIOS ROM was labelled up “NSS V3” and I am pretty sure MAME only has V2. I dumped it and sure enough it wasn’t recognised by MAME.
Ill have to get it sent off or you can download it here

I have got hold of a very nice Nintendo Super System. This was the arcade equivalent of the Super Nintendo. The board is in very good condition but was sold on eBay as “untested” which usually means it doesn’t work. 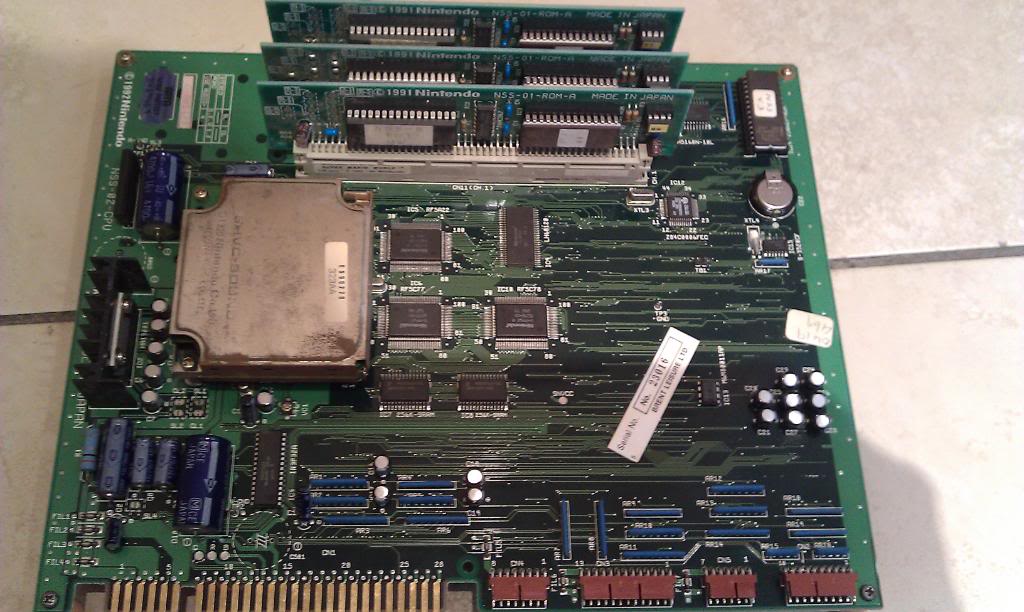 The board came with 3 games, Super Mario World, Super Soccer and Super Tennis. From what I can tell all these games are the same as the SNES versions with the addition of the game timer. 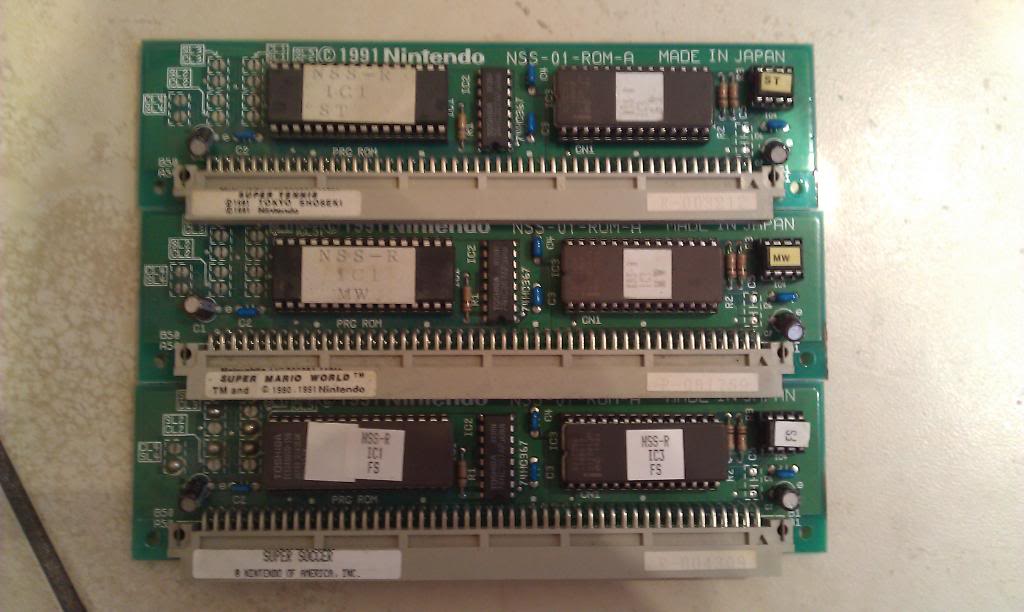 It came today and I fired it up, it uses a standard JAMMA pinout with a couple of extra things and stereo sound instead of mono.
Much to my surprise the board boots up and everything plays fine. 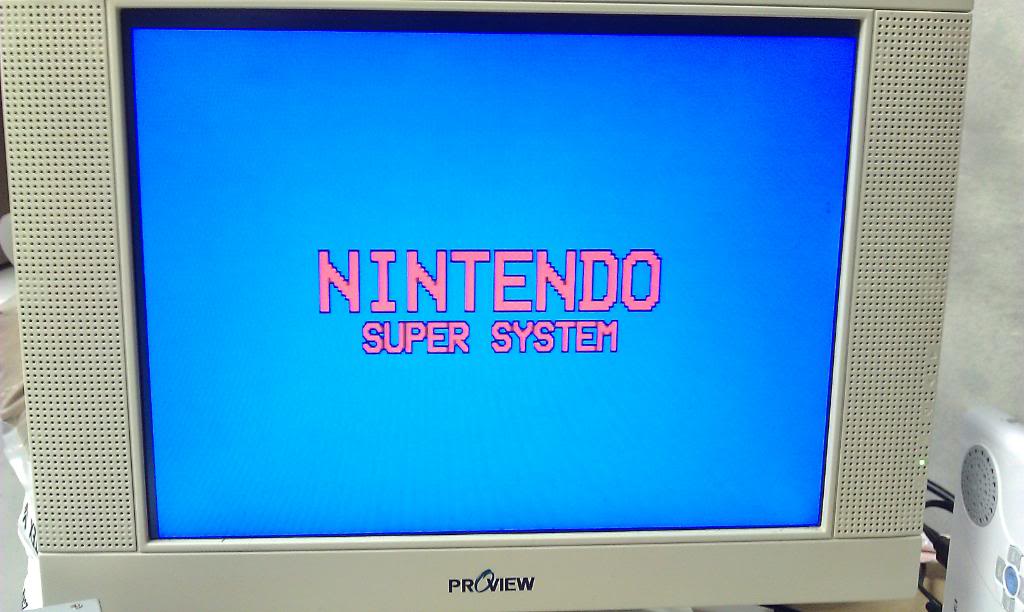 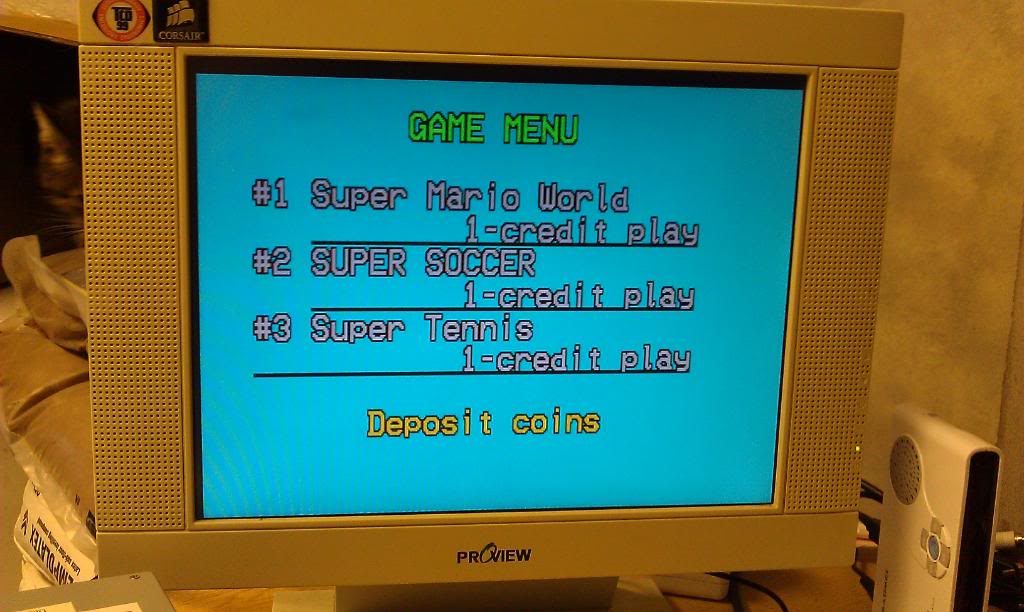 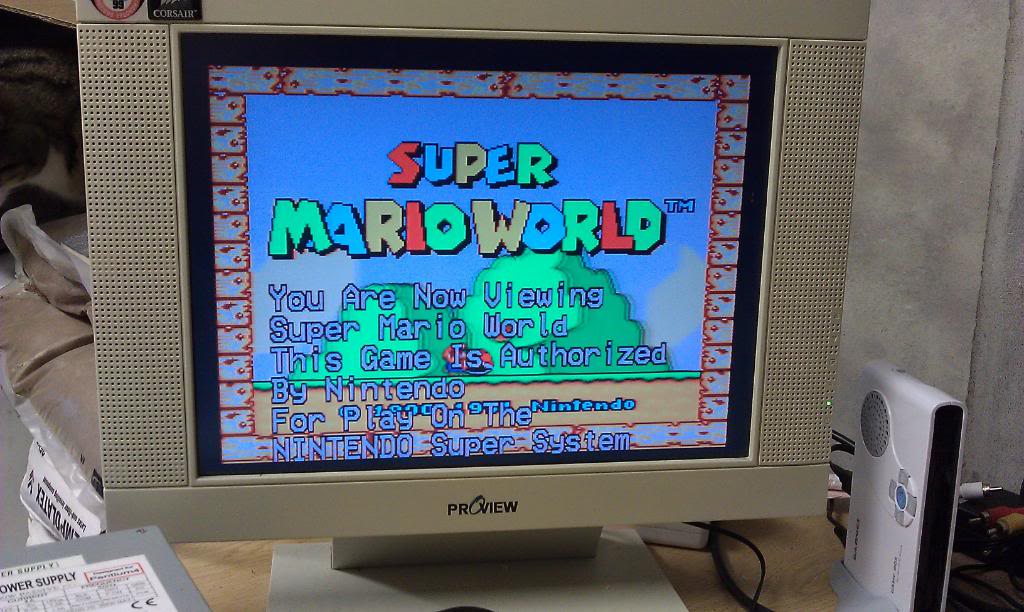 Its an interesting piece of hardware but not sure why it was ever made as it was released around the same time as the SNES was.